Monkey was born at 8lb 3oz (3.7kg) and then lost a few pounds in the first few days. By 2 weeks he had put on weight and was 8lb 13oz (4kg) so everyone was happy and he was just over the 50th centile line on the chart. For anyone who doesn’t know it’s basically the NHS’s way of deciphering what is a ‘normal’ weight. The difference within this weight is huge but basically if your child is on the 50th centile line, they are pretty much average weight for their age, 50% of babies that age will be bigger, 50% would be smaller. If that makes sense? I’ll put his charts in to show you what I mean. (Sorry about the rubbish picture quality!) 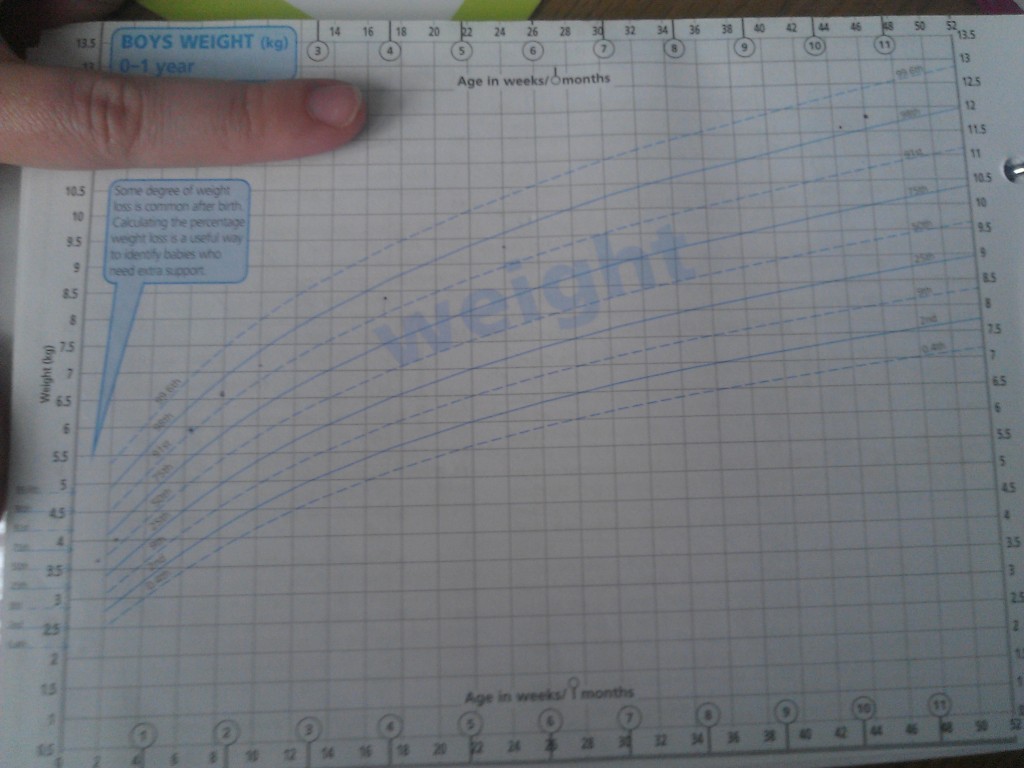 By 6 weeks, Monkey had shot up to 13lb 2oz (5.95kg) and this put him at about the 93rd centile. This means that he weighed more than 93% of other babies his age. Because it happened so quickly he had to be weighed regularly for a while but he stayed pretty constant along that line of the chart. After about 6 months I didn’t get him weighed for a while, as all was fine, but when we got him weighed again at 10 months old he had shot up again and since then he is on the 98th centile line. Which means he is bigger than 98% of babies his age.

I took him to get weighed for the first time in ages a couple of weeks ago and so at 15 months he weights 28lb 14oz (13.1kg) – to put this into perspective, an average child (on the 50% centile line) reaches his size and weight at about 2 1/2 years old. Monkey isn’t even 1 1/2 yet! He’s not fat, as I’m sure you can tell in pictures I have posted of him, but he is just very tall for his age. 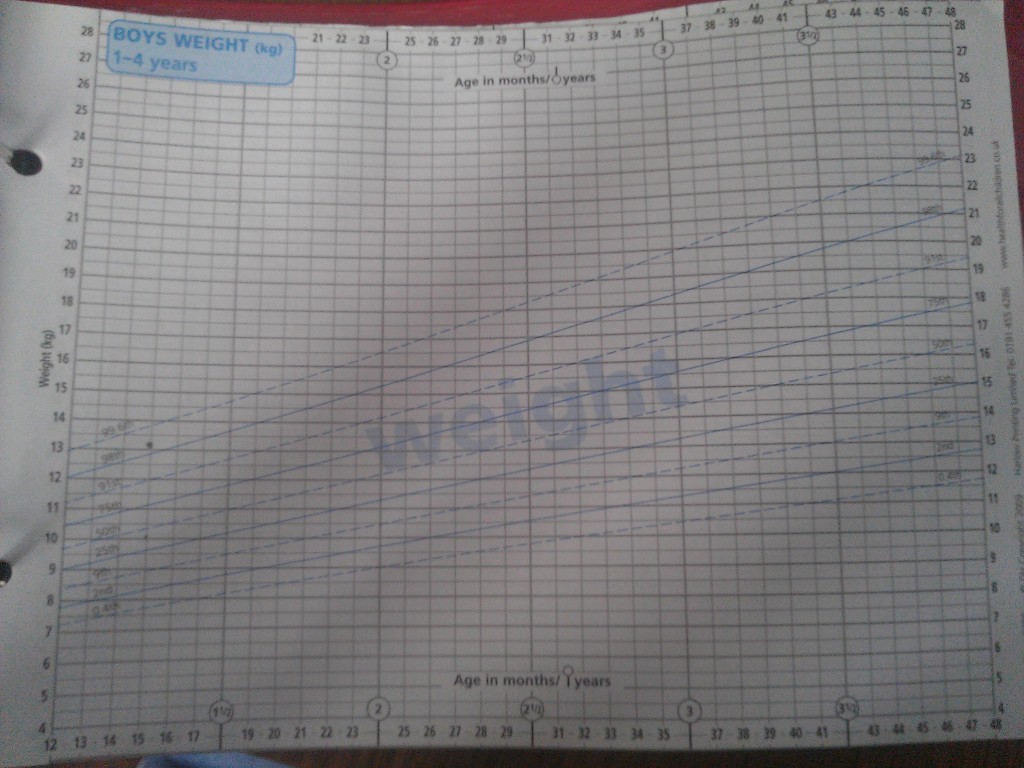 What am I going about? Is that what you’re wondering?

Well, I don’t really mind how tall he is, he’s healthy and happy and the health visitors etc. are happy with him but it does pose some problems sometimes. He isn’t talking yet, and I know some children at his age are, others aren’t but because he is so big people tend to give him a funny look when he is ga ga ga ing or grunting and oohing, because at 2 1/2 that would be a bit delayed. Not out of the realms of possibility of course and I know babies develop at their own pace, but every 2 1/2 year old we know is talking well by now.

Even one of my friends, the other day when Monkey was just in a t-shirt and nappy, said “I know he’s not old enough, but when you look at him, it looks like he is old enough to not be in a nappy anymore.” and yeah, at 2 1/2 potty training would be around now. But at 15 months old? No way! We were then talking about their babies who are 7 months old and 4 months old, and I was like oh Monkey is 15 months in a couple of days, and again, even though they know he’s not very old, there was a moment of wow, yeah he’s only 15 months old.

With strangers it’s worse, with the competitiveness that seems to come hand in hand with parenthood. I try really hard not to get too involved in this kind of thing as they are all individuals, but it seems this kind of comparison is almost inevitable sometimes. When their child who is the same size is talking eloquently and is very coordinated and running and climbing well, and they look at Monkey, I feel like I need a loudspeaker or a sign around my neck saying “He’s only 15 months old – he’s just really big! He’s not backwards!!” but instead I just bite my tongue because I know it doesn’t worry anyone but me, and even if they do think he’s a bit slow, so what? They will never see him again anyway.

It’s not just other people though, he’s so tall and he has been walking for so long now that I have to stop myself from expecting too much from him too. It’s so easy to compare him to other children of his size, or even smaller, and to encourage him to do what they are doing. I subconsciously seem to think he should be talking by now, and understanding what we say more and basically be able to respond to us way more maturely than you should expect from a 15 month old. I feel like he is so uncoordinated when he is climbing and gets his limbs all in a tangle sometimes but I have to remind myself that he has a big body for his age and long limbs to try and get to do what he wants.

We were at a soft play centre the other week and a toddler who was so much smaller than him was climbing up the step ladders and over rope ladders and just wow he was so coordinated in comparison that I couldn’t help feeling bad for Monkey. So I try and help him do a bit more, but I don’t want to be a pushy mother either. I will help when he wants to climb things and soothe him when he’s frustrated but I don’t want to force anything on him, I know he’ll develop at his own pace.

Hubby is 6’2″ and his family are all tall. With the exception of my mum, I come from a tall family too. I’m 5’7″, which ok isn’t massively tall, but it’s not petite either, so I guess it’s understandable.

It feels like he has shot up again recently as he is a bit leaner, less of a baby tummy, so I guess it’s on my mind. His feet are huge too, infant size 6G already. But Daddy has reeeeally big feet (and scarily long toes) so I think Monkey gets that from him!

Anyone else out there have a really big baby or ever felt the same?