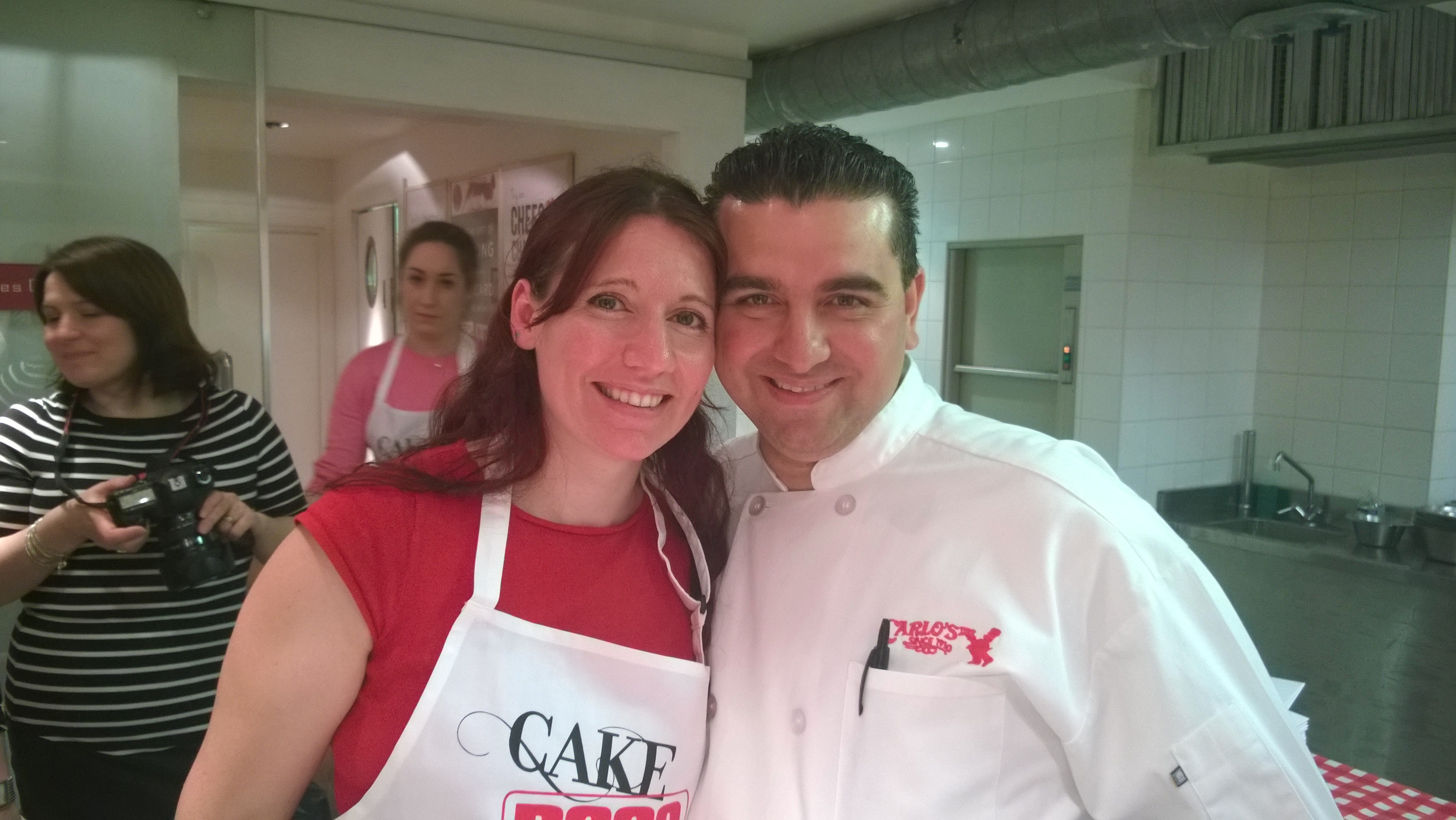 Buddy Valastro, AKA Cake Boss, is an awesomely talented New Jersey Baker who has become a household name in the US, and across the world. Having watched his show a lot, I have also attempted to make his amazing Red Velvet Cake recipe in the past, and have blogged about it. This blog post led to me receiving an invite to meet the man himself! I couldn’t believe it! After much excitement I agreed and made all the arrangements to head to London for the evening.

Last Monday was The Night! I headed to L’atelier Des Chefs in London for a Masterclass in Cake Decorating and to meet the amazing Buddy. I was excited, nervous, awestruck… but you know what, I had so much fun, and he was LOVELY! 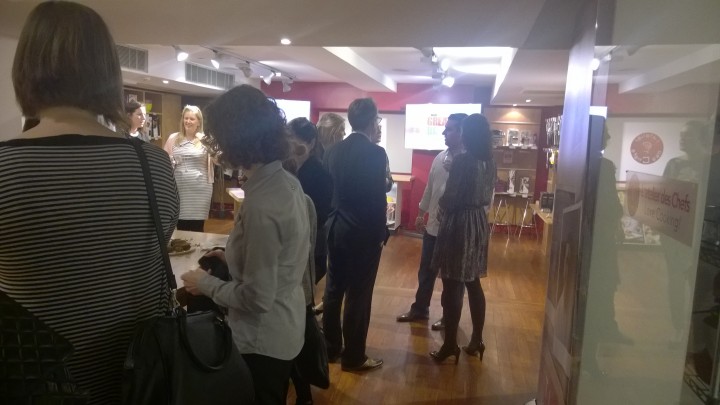 The man himself arrived!

He was such a lovely, genuine guy and seemed genuinely happy to meet us all! There was a real mixture of people there from die-hard fans, to journalists, digital media marketing peeps and a few of us bloggers (including the lovely Lucy from Capture by Lucy, and it was great to meet her!). There may have been more variety than that even, there was quite a few people there and I didn’t get to speak to everyone!

After meeting Buddy and his UK ambassador Juliet Sear we headed in to the kitchen where Buddy gave a demonstration of some of his techniques, giving us decorating tips and showcasing his range of products which you can buy (more on that later). He was also answering a lot of questions, on a whole variety of subjects including the balance of personal/private life with filming a reality TV show – to why he does what he does. He was very lovely and genuine and took it all with real aplomb. He said that for him it is all about family – he wants people to bake as a family and show people that anyone can do it. And you know what, I believed him. 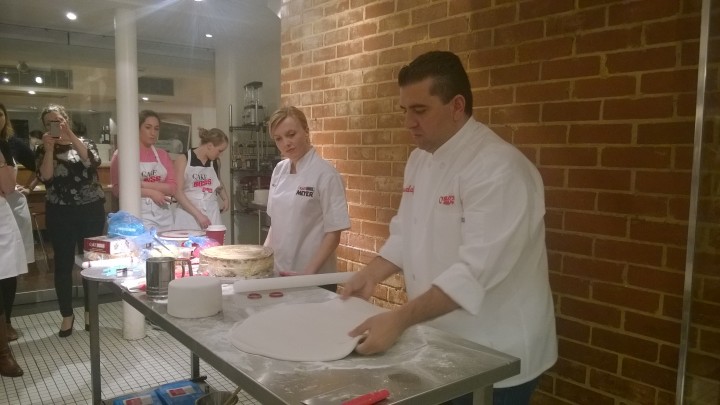 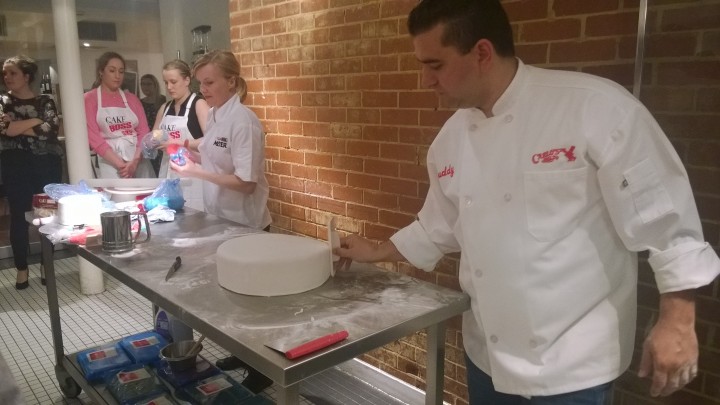 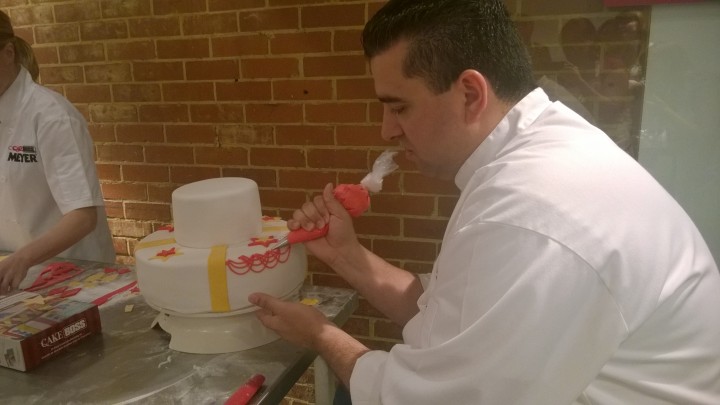 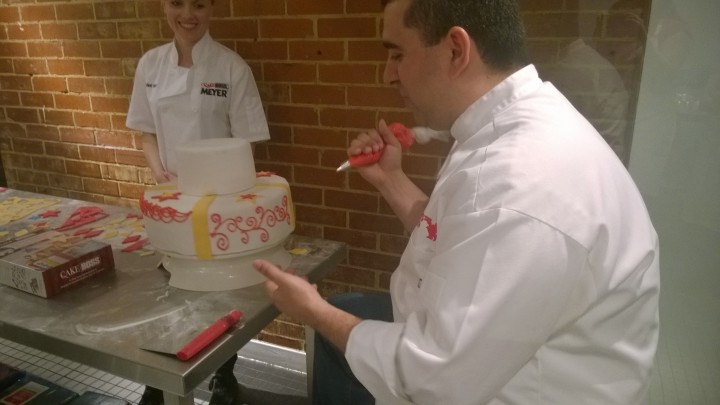 Then it was our turn to have a go at decorating cakes. The hard bit of baking, trimming and shaping the cakes had been done in advance so all we had to do was decorate, but it was for a competition judged by Buddy! Yipes! Right off I made a mess of my fondant so he helped me sort it out and we had a lovely piccy together and a brief chat, though I was a bit awestruck to ask any serious questions not related to cake decorating – sorry everyone! 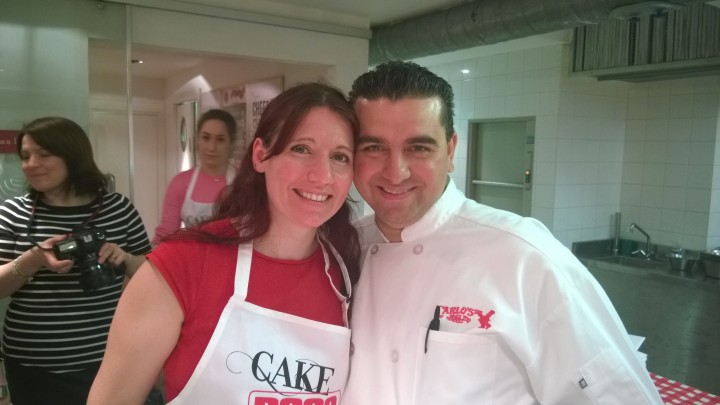 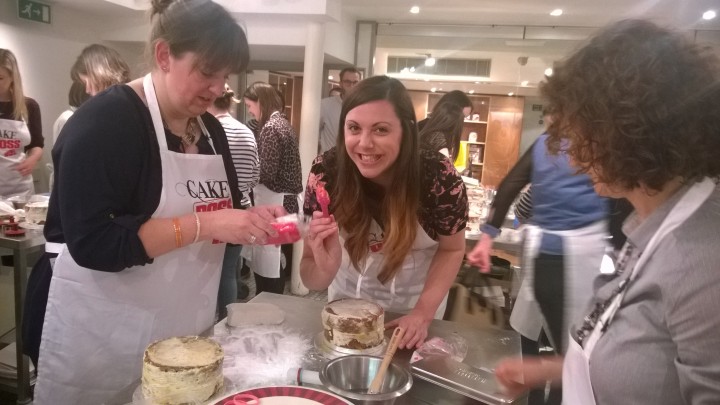 The lovely Lucy from Capture by Lucy

I got the fondant on the cake with the help of his handy smoother tool… (ok so it’s not THAT smooth, but better than I’ve ever managed before!) 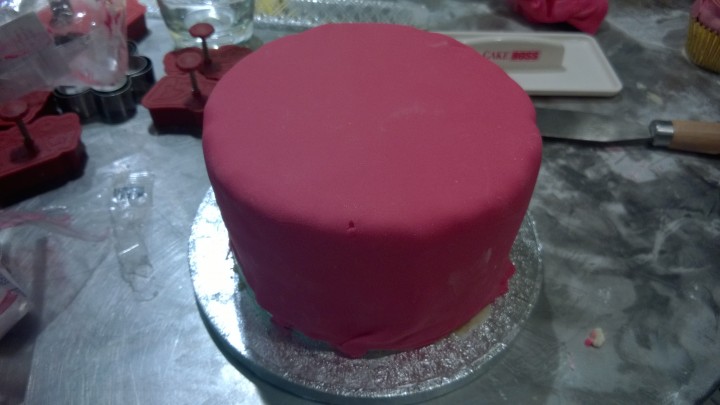 But then didn’t really know what to do, and instead of forming a plan, I decided to just have some fun and try out some different techniques, some of which I managed better than others!! My drop lines were not particularly effective as they kept falling off the cake. Think I need some more practice there!! 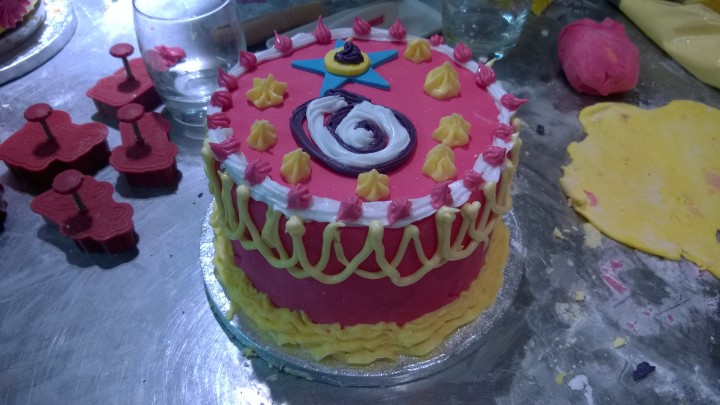 I was having lots of fun then I looked round and realised some people were actually taking it pretty seriously…. and their cakes looked fab! Oops! So I panicked and stuck a layer of fondant over my messy creation in a last ditch attempt to make it a bit more appealing? (Not sure it worked??!) 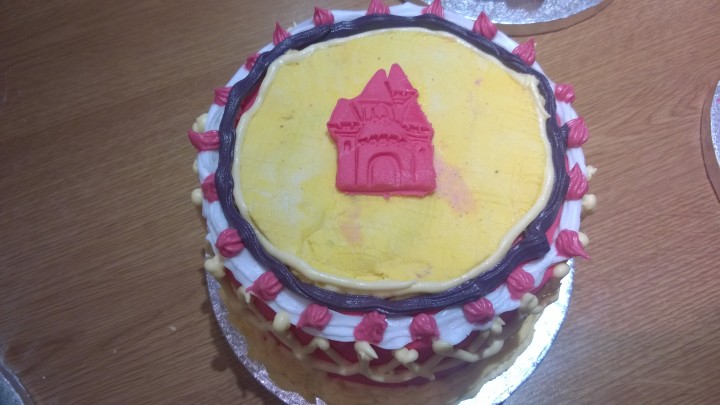 Then it was judging time and there was so many fab cakes to choose from (not including mine – though shhh I don’t think mine was the absolute worst – but it was down there with them!) and he chose a lovely cake with a bow decorated by Kirsten at The Little Wedding Helper. 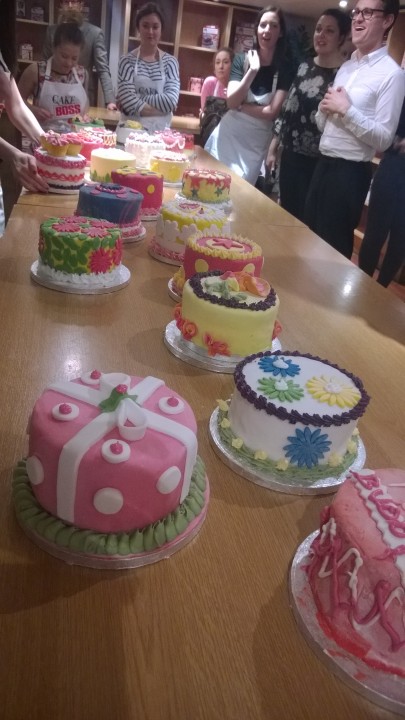 The evening was over and I got my pinny signed by the man himself, and a couple more snaps to remember the evening! 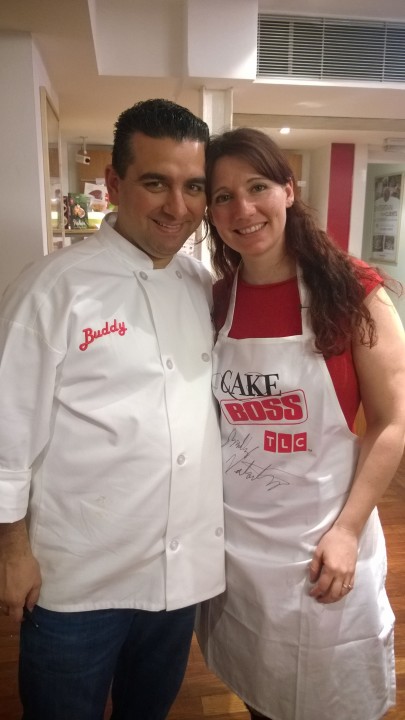 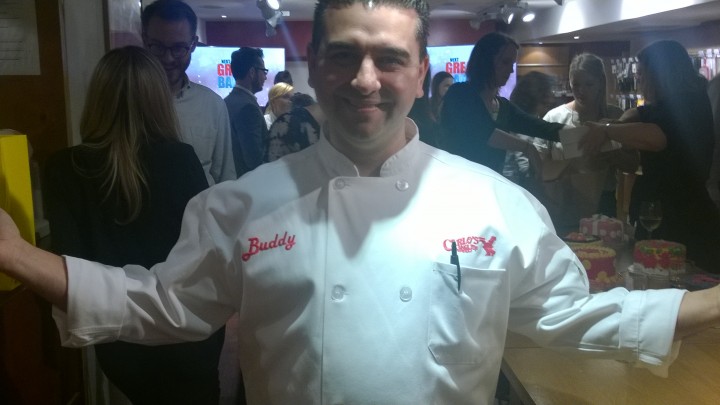 As we were leaving we got an awesome goody bag with a Cake Boss DVD, Baking Tips book, a Cake decorating kit, a book by his UK ambassador Juliet Sear and some fondant icing! Great stuff! 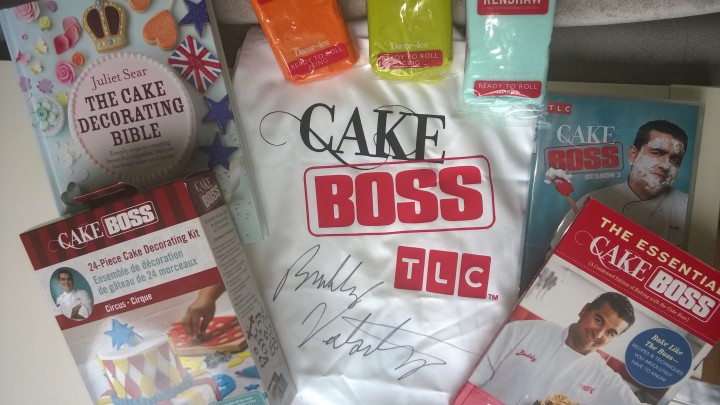 Some of his products were fab, I am very excited to try out the kit we got as a freebie and have popped a couple of others onto my birthday wishlist! 🙂

If you would like to buy any of the Cake Boss range I am sure there are a lot of places you can buy them but I have found them on Very.co.uk

If you would like to see Buddy in action you can catch him on TLC as follows:

Cake Boss is on Fridays at 9pm from June

Next Great Baker is on Fridays at 9pm from September