I love swimming, always have done. My mum always used to call me a water baby as I just adore being in the water and though never the most graceful person in water or out I do consider myself to be quite a strong swimmer. Hubs on the other hand isn’t such a strong swimmer. He can swim and does enjoy it but I guess isn’t quite as confident as I am at being out of his depth for example. I think and have always thought that swimming is a hugely important life skill and I want the kids to be strong swimmers too. 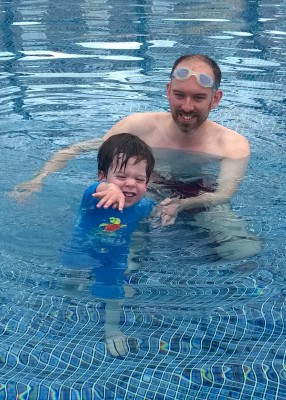 One of the times Monkey has actually enjoyed swimming

Because of this we have tried numerous times in Monkey’s little life to encourage him to enjoy swimming, with varying degrees of, well, failure. We have been just with us and he has clung on for dear life the whole time. We have tried classes which involved jumping in and going underwater along with just having fun but he spent nearly all of the sessions screaming his head off until eventually we stopped taking him as it was stressing hubs out so much and ruining a large chunk of the weekend. There has been the odd occasion where he seems to have enjoyed swimming but then it generally goes back to screaming again the next time.

The last time we tried was on our holiday last year where after finding the water cold once, he point blank refused to get in for the remainder of the holiday and made a holiday by the pool very difficult indeed.

Now, LM adores water I thik she would be happy splashing around in water all day if she could, she just adores it, so I have been thinking it was time to get her swimming, and I do think she would love classes. But, Mummy guilt stepped in and i just knew I couldn’t start her swimming without addressing Monkey’s swimming fear. He starts school in September, and though I have no idea when they start swimming with school, the last thing I want is for him to be having a screaming meltdown at the side of the pool and refusing to get in when that time does come. 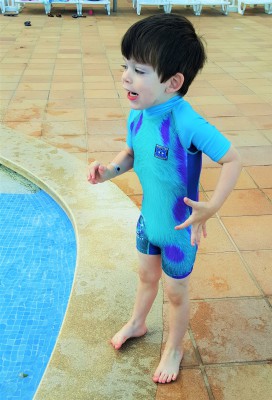 On holiday last year, it was after this that Monkey refused to get in the pool

So after chats with hubs we decided to try to go back to basics and just make going swimming the four of us a regular thing. We chose an infants pool that we know is really warm as the temperature of the pool on holiday was such a huge issue for him. I was half looking forward to it and half dreading how stressful it would be. We headed off bright and early Sunday morning and to be honest just getting out of the door was stressful and I did wonder more than once why on earth we were doing it to ourselves. I hid this though and Hubs and I agreed to having very low expectationsas he would  probably not get in the water at all.

Straight off, LM adored the water. she was kicking her legs and splashing her arms in a way Monkey just never did as he would always cling to us so tightly. She loved sitting on the side and “jumping” herself in to the water where one of us caught her. She was happy to be dipped underwater and didn’t cry once. In short she just adored every minute. 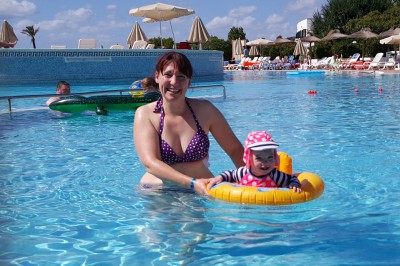 LM adoring the water on our holiday last year

To start with, Monkey did as expected and sat on the ledge near the pool. We did persuade him to dip his fingers in and see it was warm but for a while he was adamant he did not want to get in, despite laughing and clearly enjoying watching other children having fun in the water. This is the point where often peer pressure gets the better of us. You can see the other parents looking and wondering what you are doing, and it is so tempting to just grab him and get him in the water… but we know from experience that this is not the way to do things with Monkey and that he has to decided to do it in his own time.

We could see he was tempted but still not sure so hubs said that if he got in and tried it that we could go to a cafe fr hot chocolate afterwards. Monkey loves a visit to a cafe, but is stubborn enough that he would say no if he really didn’t want to do something. But, he said yes, and he got in. And he did amazingly well. To start with he clung on for dear life but gradually relaxed a little. We managed to get him to kick his legs while we whizzed him round and that was brilliant and I daren’t hope for more.

Then when he realised that he could stand on the floor of the pool he ventured away from our supporting arms. He was having great fun walking slowly in the water, pretending to be a spaceman! Things just got better and better when he agreed to hold his arm bands and eventually let me put them on him. In nearly 4 years we have not managed to get armbands on him due to the screaming meltdown any attempt has resulted in. I was also completly amazed when he copied his baby sister by sitting on the edge of the pool and jumping in to where daddy could catch him. Absolutely incredible and we were so proud of him.

In the end he could not stop telling us how much he loved swimming and how “swimming is my favourite!” and he did not want to get out. Hubs and I exchanged incredulous looks more than once and just couldn’t believe how far he had exceeded our expectations.

Now, because I know how contrary he can be I am still wary to say this is it and he now likes swimming, but things are looking positive. We couldn’t go the following weekend as we were away but are going to try and go as many weekends as possible to just cement this and help him to love swimming as much as his sister clearly does naturally.

Hooray and here’s hoping to lots more fun swimming as a family!

11 thoughts on “A swimming breakthrough”