Now, I am no film critic and have never attempted a film review before, but somehow I felt compelled to write about this film. True in my uni days I studied film and television but don’t worry this review is not going to worry about the mise en scene or whether this film fits with the directors usual style, blah blah blah. I just wanted to share my thoughts on what is one of my new all time favourite films. 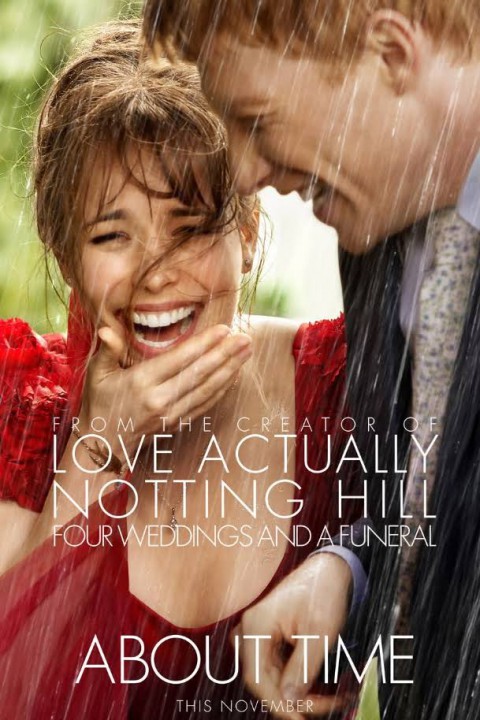 About Time is  from Screenwriter/Director Richard Curtis, well-known for classics such as Four Weddings and a Funeral, Notting Hill and Love Actually. Somehow though I feel this film has unjustly slipped under the radar and is not as well-known as it ought to be. But perhaps I am not the best judge of this as I last went to the cinema over 3 years ago and this apparently came out in 2013 – so I clearly behind the times. The fact that it hasn’t come to my attention until now though is why I feel it can’t be anywhere near as widely known as his previous titles, which is odd because in my opinion this film is every bit as good, if not better.

Starring Domhnall Gleeson (you may recognise him as Bill Weasley from Harry Potter, though much to hubs surprise and hilarity I could not place him at all!) and Rachel McAdams in the lead roles, Domhnall’s character, Tim, and his father (played by Bill Nighy) have the ability to travel back in time within their own lifetime. So far so cliché right? But I feel that this film is some of Richard Curtis’ best writing. Full of wonderful British humour and hilarious characters it is so lovely to watch.

Whether he is travelling back in time a few moments to avoid making a prat of himself or travelling back years to try and improve his sister’s happiness the results aren’t always what he expects and much comedy, and at times, sadness ensues. And that is where the writing is so brilliant as interspersed amongst the laugh out loud moments there are some beautiful pearls of wisdom.

I watched this film on a day where I was feeling really mopey and sorry for myself. Fed up of the mundane monotony that is the SAHM life sometimes. What this film did was remind me to see the magic in the mundane. I thought about what I would change if I could go back in time and I don’t think I would change a thing (though being able to stop making a prat of myself would be quite handy). It made me stop being mardy and look around and take pleasure in the moment and recognise how incredibly lucky I am to have my lovely ordinary life.

Yes it sounds cheesy but this film lifted my spirits. Touching, heart warming, tender, sad at times and uproariously funny at others. A real feel-good film, all I can say is watch it, watch it now. It is on netflix so if you have it then there is no excuse.

7 thoughts on “About Time – a Film Review”