There are seemingly endless choices to make as a parent. Breast or bottle? co sleep? Baby wear? Then when it comes to weaning,  traditional purée or baby-led weaning? As I wrote recently I think there is far too much judgement which ever way you choose so I am not here to say one way is better than another. Different things work for different babies, and indeed parents. 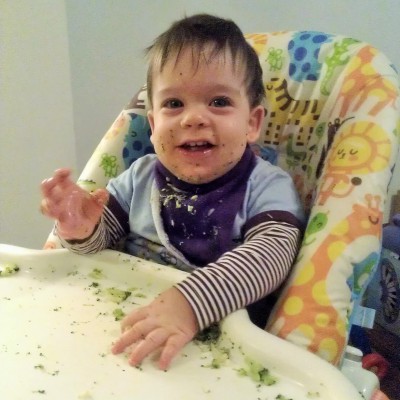 With Monkey I didn’t know much about BLW other than that you had to start at 6 mths. Monkey was a big baby and I will be honest, by 4 ½ mths milk just wasn’t cutting it anymore so we started down the road of purées. I spent ages making purées during his naps and he scoffed almost everything we gave him (though he never did like banana!). We then extended out to finger foods and he ate everything we gave him until around 13 mths when the fussy eating began.

It is something we still struggle with at times now. He will eat most things but he says he doesn’t like things we know he does like and often refuses to eat his dinner. We have tried various tactics with this and most of the time once we have convinced him or he has decided to take a bite then he will eat quite happily. Other times he sits with the food in his mouth and refuses to swallow it. It’s like a psychological barrier and seems to be the most random of foods that he decides he doesn’t like.

I have heard it said that baby-led weaned babies are less likely to be fussy than their purée fed counterparts. Something to do with the fact they learn to chew early on (as opposed to a purée which just requires swallowing) and that they get to experience different textures early on as well as different tastes. Texture has been one of Monkey’ sticking points so the idea that you can prevent fussiness does intrigue me.

I will admit that I have been put off baby-led weaning in the past by some of the attitudes I have encountered from its advocates. Not all of course and I guess I understand that if you feel passionate about something that you will want everyone to try it, but a few such parents have gone a bit OTT and made other parents feel bad for their choice not to do it. That is not the fault of the technique but it is easily tarred with the same brush as the over preachers so I have judged baby-led weaning harshly in the past, which was wrong of me. 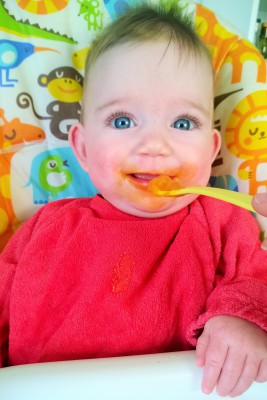 Now, enter LM. At 5 ½ mths she too seemed to just not be as satisfied with milk anymore, so we headed down the same purée route as with Monkey. Though there are some differences this time. One being our experience with Monkey and knowing that we tried so hard to introduce tastes and textures to him but he still is a fussy eater. Two is that actually LM is already much fussier about which purées she will and won’t eat than Monkey was. The combination of these led me to fret a bit as I want to do as much as I can to try and prevent having two fussy children in the family!

But where to start? How to approach it when she is already eating purée? How do I even do it? Regular readers will know I got a bit het up about it and was over-thinking it a lot. But that’s what I do I’m afraid!

As mentioned, I believe that the same approach isn’t necessarily right for all babies, or all parents, and I think that is my biggest sticking point with BLW. I’m not sure that I am that well suited to the approach. The mess is part of it, though I can cope with that. But I am not the most patient person and I can definitely be a bit of a control freak, yep I know my flaws! So the idea of basically leaving baby to it to eat or not eat is really hard for me. As mentioned, LM isn’t satisfied by milk alone anymore, and the thought that milk should be her main nutrition for many months to come is confusing for me. Isn’t that why we start weaning? Because they need more nutrition than they can get from their milk at this point?

LM also gets massively annoyed when she is hungry if she doesn’t get food inside her pretty quickly. This leads to her getting frantic and screaming her head off. I have read that as part of BLW you should let them get annoyed as they are frustrated at their lack of skills rather than with hunger. But what if they are frustrated because they are hungry and can’t get the food in quick enough? I have quite a low tolerance for the sound of baby cries, especially when Monkey is chattering away at me too, so if I can help keep her calm by feeding her then I am going to. For my sanity as much as anything else!

With her reflux I do think it is important for her to have solids in her tummy too so that is another reason I won’t let her get frantic, or rely largely on milk, because I do believe she needs solids to help keep the reflux at bay. 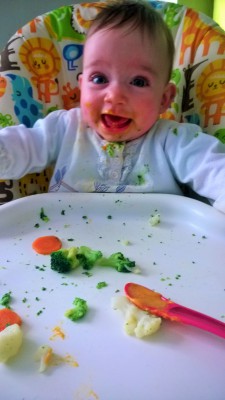 So I have accepted that we won’t be doing the full baby led approach. We are using a combination of purée and finger foods with a variety of tastes and textures. I have read staunch baby-led supporters who say that BLW is all or nothing and that saying you are combining the two approaches is like saying you are a vegetarian who also eats meat. You either BLW or you don’t. And that’s fine, I understand why they say that.

So I am not sure what to call it but we are using a combination approach. For example earlier today she had some beef, sweet potato and carrot puree alongside some steamed vegetables. The puree filled her tummy a little while she explored, picked up and munched on the veg. She also had a go with the spoon and fed herself some of the puree on mummy-loaded spoons. 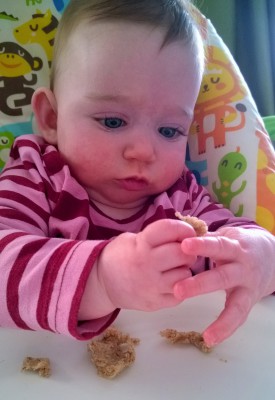 The ideal will be that this will only be temporary and that as she learns the skills needed to solely self feed I will feed her less and less. but in the meantime, to prevent her getting frantic and to keep me sane, we will do it our way. I have to admit that I love seeing her munch on a whole chunk of pasta or bit of cooked chicken. I love seeing her work out how to pick things up and get them to her mouth. I really really hope that by introducing all of these textures we may prevent some of the fussy eating issues that we have with Monkey… but only time will tell I suppose!

How did you wean? Purees? BLW? Or a combination like us? Do you have a fussy eater?