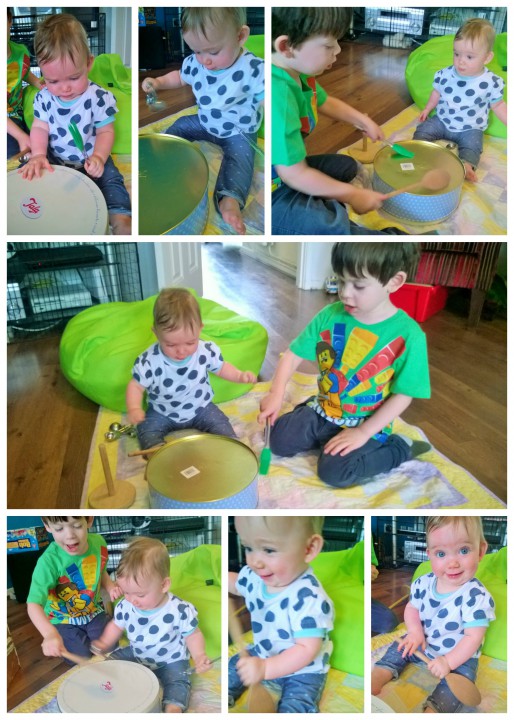 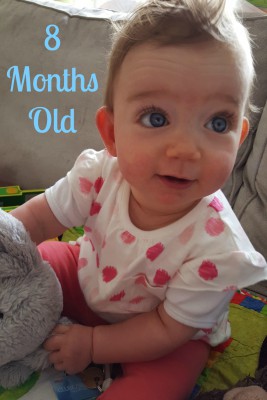 Another month has flown by and our little girly really isn’t so little anymore, she is getting bigger by the day and her little personality is really starting to shine too. This has turned out to be quite a long update actually because she is doing more and more all the time!

Our Little Miss is very stable sitting up – when she wants to be. I say that because she quite often dives forward or off to the side to get something (if she sees something, she has to have it, and probably gum it to death) and though she will sometimes right herself, there is sometimes some amusing (naughty mummy) topples and comedy rolls in a fraction of a second. Which do come as a bit of a shock to her, poor thing! She loves standing too and is getting more stable all the time.

She has started moving a little… she was bum shuffling backwards a little bit, especially in the bath and kept moving herself into one of the corners, not sure why? But now she seems to be more focussed on throwing herself forward (thankfully not in the bath)  and spending more time on her tummy. Which is a good thing, who knows, maybe we will have a crawler this time? Though so far if she does move on her tummy she also only moves backwards… or round in circles so far!

She loves the mobility she gets in her walker (and it’s always proof to me how much babies are capable of learning) as she goes forward, backwards, sideways and can get herself to any part of the downstairs she wants to, with no input from us anymore. Sometimes she’ll go off down the hall and I think to myself “ooh best go turn her round, just finish this” only to then see her come whizzing back towards me again having performed some multi-point turn at the end of the hall! Genius! She does get frustrated though because she can get to where toys are but can’t pick them up off the floor or wherever and just runs them over… and this makes her grumpy.

In fact we are entering a bit of an age of frustration as she does get quite annoyed with things. For the most part she is very intent with toys and when she is in the right mood she will sit for ages exploring and fiddling with toys and things. But sometimes she gets over excited and really frustrated! Sometimes this manifests itself with loud shouting but a warning sign that she is getting annoyed is a lot of ooh-ing, as she is a real ooh-er which makes me chuckle! Here’s a little video of her chatting and then ooh-ing if you fancy watching some cuteness 🙂

Another thing that has been making her frustrated is her teeth as her 3rd top has now popped through and the 4th is well on it’s way so she now has a little toothy grin with 2 at the bottom and the top 2 starting to show. Very cute but teething seems so cruel on little babies! Far from over yet either :/

We’ve also had more trouble with her reflux this month which is annoying as we had hoped the medicine would be working. Turns out though that we should be giving it 30mins to an hr before food, but neither the Dr or pharmacist told us this, in fact the pharmacist said with meals. Thank goodness for the internet and we are now giving it to her at the right times and have seen a bit of an improvement. Fingers crossed it continues as it’s horrible seeing her in pain! 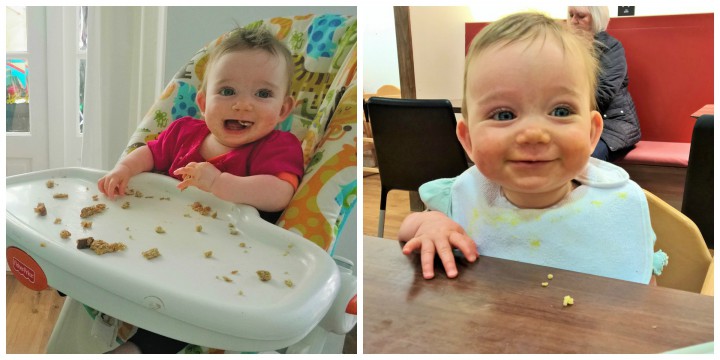 She loves her food and loves feeding herself so the BLW is going well, but we are still combination feeding as it definitely helps her to get some food in fast while she is exploring and then she doesn’t get quite so frustrated while she figures out how to eat the finger foods!

Moving on from foods, another interesting development this month, is that she has suddenly decided to poo and wee in her nappy. For the first 7 months of life this was not the case as she has always done it when we have changed her but now she is doing it every time in her nappy which is good but has been an adjustment, and we are having to develop our “poo nose” as we don;t always realise when she has pooed yet lol! Sorry if TMI 🙂

In general, when she isn’t in pain or frustrated, she is such a happy and smily little soul and very chatty too which is adorable. She loves people and is a little charmer, grinning and chuckling and reaching for any strangers who happen to be nearby! Love her to bits and hope we settle her reflux down a bit as it’s been affecting her daytime naps a bit too and I could really do with her settling down a little again! 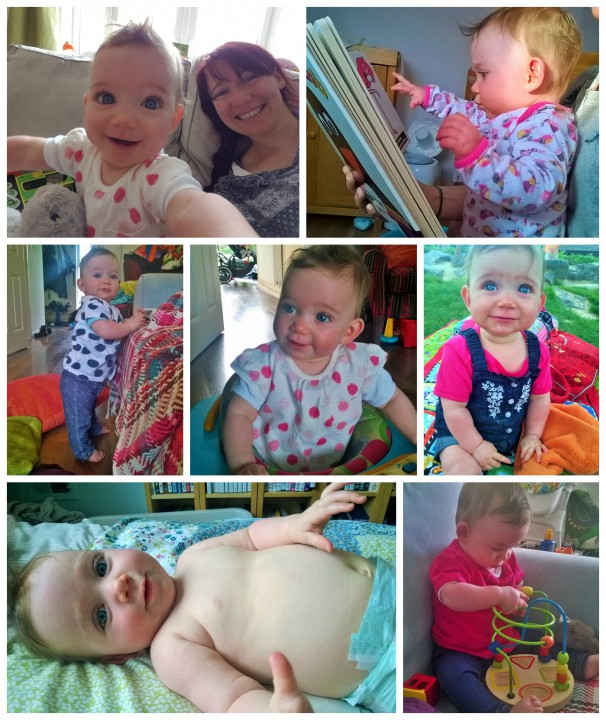