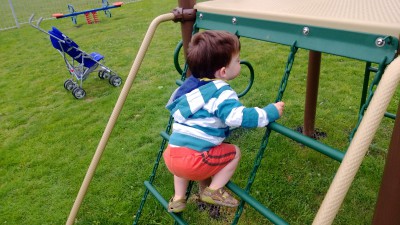 Monkey loves climbing. As an early walker he was always desperate to climb from quite a young age, and to be honest, this isn’t something we have discouraged. For a long time it has been one of his favourite things to do at the park and he is so good at it. Going to tumbletots has helped with this too as there is a lot of climbing involved and it has also been a great way of teaching him the safe way to climb up but most importantly the safe way to climb down again.

Little ones don’t have much concept of height or fear and I am sure this causes many a parent to have heart in their mouth moments and leap to the rescue of said little one who decides to step off the top of a climbing frame! Monkey has done that to us so many times, though thankfully now he is learning the safe ways of getting up, and back down again!

I recently read a post on Happiness is here all about using the term “Be Careful” with your kids. It was a really interesting read so I highly recommend it, and I have been thinking a lot about it ever since. How much do you and should you allow your child/ren the freedom to explore? Does saying “be careful” negatively affect your child and the way they play, making them more likely to stumble than if they were let be and able to trust their instincts? I’m not sure. 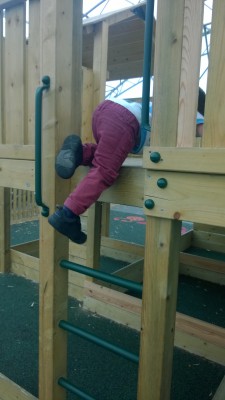 We use the term “be careful” all the time, but usually with an explanation. For example yesterday during a mad half hour while Monkey was spinning round the living room like a little loony and I had to step in to stop him bashing his head on the corner of a table he was told “be careful you have to look where your going or you will hurt yourself!” When he gets exctited half way climbing up something and wants to take his hands off to give himself a round of applause  he is told “be caeful, you have to hold on or you will fall off!”

He also gets a lot of positive encouragement and guidance too. I’m a big believer in trying to be use positive reinforcement rather than negatives as I think it just works better all around (even adults respond better to positives and constructive criticism rather than purely negative feedback). So he gets lots of well done, that’s right put your hand their, yep and push up, well done, clever boy, etc. etc. But I do also warn him to be careful. After reading the post I wondered if I say it more for myself, because of my own worries, rather than for his safety. And I wondered if saying it actually made it more likely that he would fall.

As with many things parenting I don’t think it’s as simple as that. Hubby took Monkey out for  a walk Sunday morning and Monkey was absolutely loving climbing up a huge climbing frame. Hubs said he started off really close and was right there to catch him if he slipped but actually realised he didn’t need him there so took a step back. And that was when Monkey lost his footing and fell between the rungs of the ladder. He unfortunately scraped his forehead a little on the way down and Hubs was riddled with guilt that he hadn’t been there to catch him or to stop the fall. 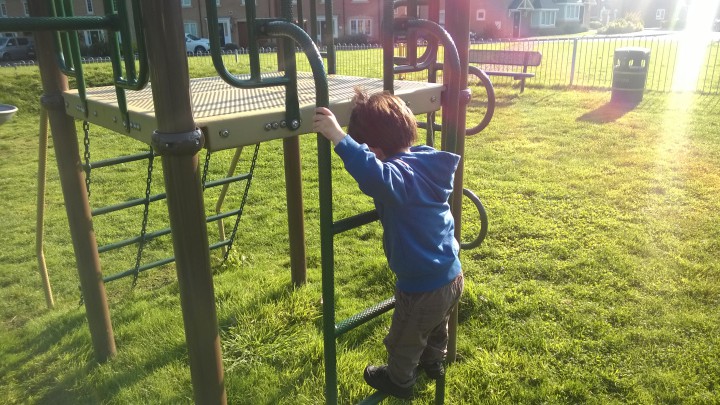 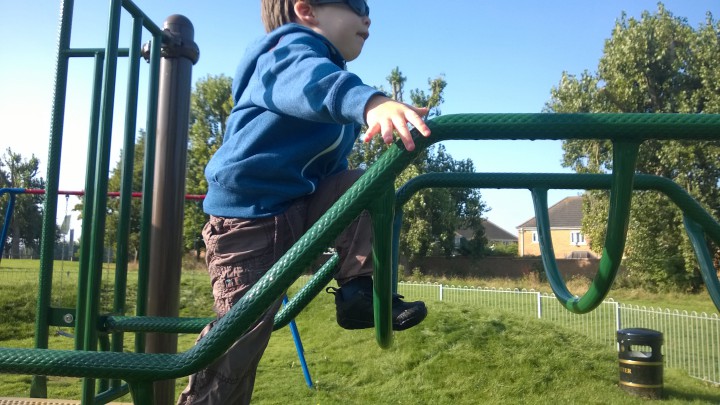 But if the parent is always there to stop the fall and save the day, then will the child ever learn to be careful? Plus I don’t actually think you can be there to stop every hurt. Monkey fell off his blimming dining room chair and split his face open! As much as we don’t want to see our kids hurt, and it is our responsibility to look after them and keep them safe, we also have to try and teach them to be careful too. It’s part of life after all, sometimes you fall, but you just have to dust yourself down and pick yourself up again. After his fall on Sunday, Monkey had a bit of a daddy cuddle, and then was back climbing again, grinning as much as ever. No worse off for the little fall or scrape, though Hubs was beating himself up about it for the rest of the day!

I guess it’s about balance, which I guess is true of most things parenting. I know some people will think we are bonkers to let Monkey climb so high, so young and think we maybe aren’t careful enough. Whereas I also know some people will think we are too overprotective sometimes. I don’t really worry what other people think of us but I just say that to illustrate we all parent in our own way. So for me, I will carry on giving Monkey the freedom to climb and explore, but I will also keep saying “be careful” because I think it helps him learn his boundaries as well as making me feel better!

What do you think? How much do you say ‘be careful’?

12 thoughts on “The freedom to climb… and fall?”