I’ve been struggling a little lately. It happens from time to time I find, being a Stay at Home Mum isn’t always easy and as our children are constantly growing and changing, nothing stays the same for very long and it is oh so easy to suddenly feel a little lost.

It’s hard to explain exactly how I feel but put simply, the house is a tip. I’m frustrated with LM a lot and the TV is almost constantly on. Now I’ve been criticised before for saying that using the tv to entertain your kids makes me feel like a bad mum as of course it doesn’t make you a bad mum. But the truth is that I haven’t been only using the tv while I clean up or do other important things. I’ve been sticking it on as I don’t know what else to do to make LM happy. Then instead of doing some jobs I sit and play on my phone.

That isn’t what being a SAHM is, not to me anyway. I’m not saying that it isn’t ok to do that occasionally but it’s when the balance tipped and that was happening more and more that I knew I was not OK with it.

As I said above, the kids change constantly. I had thought that with Monkey starting school in September that LM would continue to nap in the afternoon and I would have that time to do things. Blog, clean, veg in front of the tv. Whatever needed doing. But that hasn’t happened as LM has been dropping her afternoon nap. She does do it occasionally so I often put her down but then sometimes she just plays in her bed for a while, while I feel guilty for leaving her up there and procrastinate on starting anything as I know I need to get her again soon.

I’ve basically just got into a really negative cycle. I don’t do much with LM and I don’t do much with the house. To be fair to myself I do do things. We aren’t living in complete filth and the daily tasks get done, laundry, washing up,cookong etc. But we are sinking under piles of things that need to be sorted. And worst of all is that I know I’m not doing the best by LM. Part of my decision to be a SAHM all those years ago was because I wanted to do the things they would do at nursery with my kids. And I haven’t been doing that. I’ve been lazy and I am oh so good at making excuses for myself and letting myself off the hook instead of getting off my back side. LM has been driving me crazy but I know in my heart it’s because she needs more stimulation. She’s grown out of some of her toys and so many toys are strewn everywhere I don’t think she knows where to start with trying to play with something. Hard to see the wood for the trees with this mess! 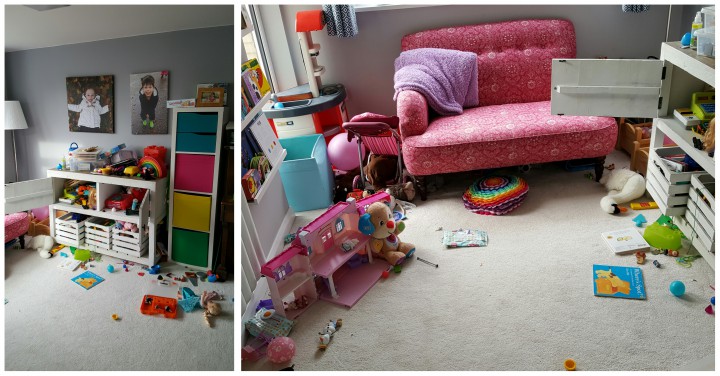 The playroom, after a bit of a tidy would you believe!

They say accepting you have a problem is the first step, so today I am making the decision to turn over a new leaf. LM is getting so grown up and I can do some activities with her that I have stayed away from as I thought she was too young. For example she has spent over half an hour pouring and scooping lentils while I have tidied and sat and typed this. I’ve joined in here and there and given her ideas and shown her things but for the most part she has been engaged in the activity by herself and it has been wonderful to watch. Last time I tried she just threw them around, but like I say, she is growing up and is ready for this kind of activity now. 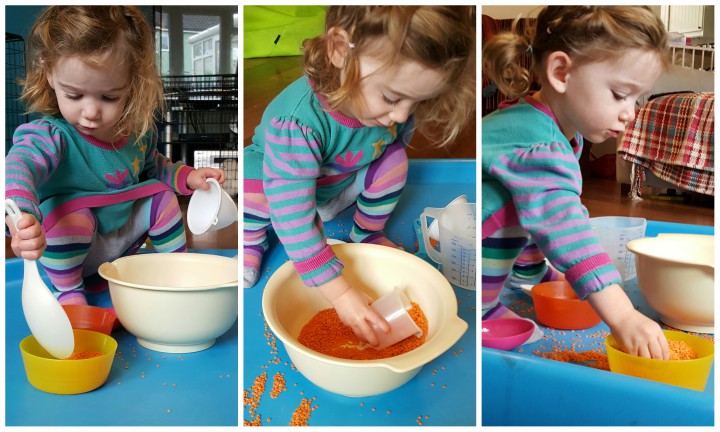 The TV went back on afterwards while I cleaned up the lentils that had escaped the tuff spot (the floor needed a sweep anyway!) but at least I didn’t feel guilty as I knew we had done something good and I had been able to literally watch her learn as she played. Then once the clean up was done we went out to enjoy a bit of fresh air and sunshine.

I am making myself a to do list so I can get on top of some of the piles of stuff when I can….but the most important thing is LM and making time for good play with her. It means getting messy with cloud dough and setting up some good imaginative play with her. I need to make more of an effort with her, so I am going to. This time at home with then when they are little is short and I want to make the most of it. I want to look back at all the fun things we did together rather than wish I had done more.

Do you ever have to give yourself a kick up the backside?

9 thoughts on “Giving myself a kick up the backside”