There are two very different sides to this story, a happy smiley version, and the slightly less happy reality! We very rarely get snow where we live near the edge of the Fens and I didn’t think we would get any this year with the way things were going (we did though, hooray) . But Monkey has been a bit obsessed with snow and we watched “The Snowman” about a hundred times in the run up to Christmas, so I wanted to have some snow fun with him and thought the best way would be to make some of our own. After a troublesome time I also wanted to spend some time with Monkey. (This was a couple of weeks ago now and I debated whether to share it, but have decided I will!) We had to go and get the ingredients so we popped to the shops – my hope was also that a nice ride in the buggy and car would send LM into a lovely slumber meaning Monkey and I could have some time together. She slept well while we were out and we headed home for some fun.

We had actually tried this before but I never managed to get the consistency right, this time we were much more successful. we used a 1kg box of cornfour and 1 1/2 cans of value shaving foam, this seemed to be about right. Monkey loved the shaving foam spray and had great fun digging his hands in. He is less good at the actual mixing so needed Mummy to mix it around a bit. It certainly is a messy play! 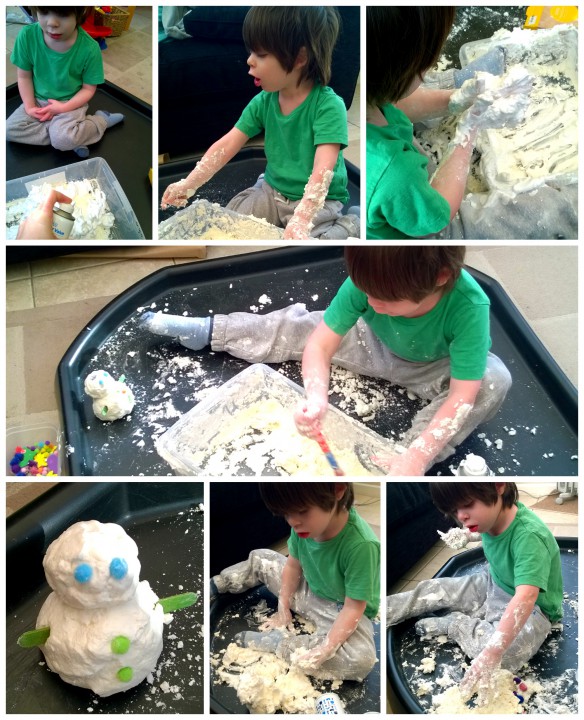 Then basically have fun. Monkey was loving playing around and I had to make a little snowman, just to see if the consistency was right ;). I added in a few bits and bobs from the crafty draw to add to the snowman but of course then everything gets covered in the snow. I have to admit the Tuff Spot is invaluable for play like this as you just have to expect that they will get mess everywhere, no matter how much you try and contain it!

Where it all went wrong…

Monkey did have a lot of fun but now here’s how it really went. We did have a lovely time at the shops that morning and LM slept as I hoped she would. But it was really very windy outside and while getting them into the car a big gust of wind woke her up. She may have slept again straight away but for some reason I couldn’t click the car seat in for love nor money. I don’t know why but it took about 5 goes of bashing the seat about which wasn’t exactly soothing for her. She did seem to doze off again though so we popped to the petrol station and I like pay at pump so I can do it as quickly as possible. Except for some reason the pump I chose would not accept any of my cards so I had to drive round again to try another. By the time I was actually filling up the car LM was very much awake and screaming. I hoped she would doze off on the way home, but, erm, no. Screamed her head off the whole way and was still screaming when we got in. Having promised Monkey we would be making snowmen he was totally chomping at the bit. I wasn’t sure what LM wanted but tried various things, changed her nappy, tried having her awake with us, tried putting her down to sleep but she wasn’t having any of it and screamed and screamed. But she did lull me into a false sense of security a few times which meant we did start the messy activity, and then she started screaming again so there is Monkey and I with cornflour and foam up to our elbows and a baby balling. The stress levels started rising. I tried to cheer her up while also giving Monkey as much attention as I could but basically I failed, I succumbed to the stress and screamed at LM. I just didn’t know what she wanted or needed and all I wanted in that moment was to focus a little bit of attention on Monkey, but I couldn’t. Then Monkey repeated what I said. Hearing your 2 1/2 year old tell his baby sister to shut up because he has just heard you say it is not exactly a proud moment. We never use that term with him and I was mortified to hear him say it. It snapped me out of my frustration a little bit and I calmed down enough to apologise to both of them and to tell Monkey I said a not very nice thing. I then tried feeding her,but she only drank 20ml and was still so tired so I tried to put her down again. She cried her eyes out but this time did actually manage to get herself to sleep. This all probably took maybe half an hour, if that, but I was totally frazzled. I wanted to try and salvage the situation and have some fun with Monkey… but by now he was having none of it and was more interested in putting the snow outside of the tuffspot and on the old sofa (its old and we don’t really care but still don’t want it completely destroyed).  When I told him not to do that he decided he had had enough completely but trying to get him to stand up so I could take off his messy clothes was apparently an impossible task for him. So I got cross (yes, again) and he balled. Hubs happened to text at this point to see how my day was going, I think I replied with a one word expletive then when he tried to offer sympathy, I misinterpreted it and he received a tirade, poor hubs! Eventually I got Monkey back into clean clothes and plopped him in front of the TV. LM was finally asleep upstairs but I surveryed the scene and the clean up operation ahead of me and basically gave up. I sat in the kitchen and sobbed. It actually wasn’t too bad a mess and when I did get round to it, it didn’t take that long to clean up, but in that moment it felt like an insurmountable task and I just felt I had failed. 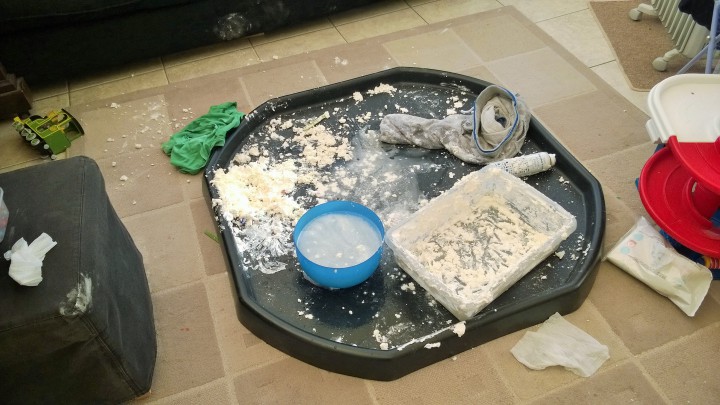 The thing is I know it was my own fault. I expected too much of LM, Monkey and myself. The next day I popped LM to sleep in her cot, she slept really well and Monkey and I just played in the garden. Much less effort, hassle but still loads of fun. I sometimes feel like I am failing at being an SAHM if I am not putting in lots of effort to do awesome activities. Doing messy play, baking or some other crafty thing to teach him through play. In my heart I know that isn’t true. I know that as long as my kids are healthy and happy then I am doing well. I guess the fact that I want to try so hard is good as I want to be the best mummy I can be, but I have to go easy on myself. Things will get easier. LM is only a few months old and nowhere near a routine yet (no matter how much I wish she was, or how many online articles tell me she should be, she isn’t). She will be one day and things will get easier but for now I need to be less hard on myself and focus on what I can do, rather than pushing myself and getting angry and frustrated when I fail and things don’t work out the way that I want them to. So there we have it, on the one hand a great activity, if you have enough time to focus on it and don’t have a screaming baby in one arm! It really wasn’t my day as later on I had to take LM to the hospital to get her hips checked (she’s fine, just routine as she was breech). When I came out it was snowing and I paid for the parking ticket, walked through the snow to the car, got her in, put away the buggy then realised I had left the ticket in the machine so had to unpack the car and go back to the machine where thankfully someone had put the ticket on top of the machine, phew!