I can’t believe it has been a year since I was diagnosed with Postnatal Depression. In so many ways it feels like 5 minutes ago and I really didn’t think I would still be taking my anti-depressants a year on. But after trying and failing to come off them earlier in the year I have been in absolutely no rush to try again until I was more sure that I was ready to. I have worried at times that I wouldn’t know when that time was and would I ever feel ready to try with absolute certainty? I’m still not 100% sure but things are different at the moment. I feel different.

I am starting to wonder whether PND is losing its hold on me and feel there is the possibility that I am coming out the other side. It is a little difficult to quantify other than saying that I feel different. I wouldn’t say life is particulalrly less challenging than it was a year ago. With the kids being a year older things are different now and probably challenging in different ways. If anything though things have been really tough lately. With hubs’ operation meaning I have had to pick up all of the slack and try and get everything done I was worried how I would cope with it. Worried that it would knock me down. But it hasn’t. I have just got on with it and though yes, I have felt overwhelmed and stressed at times, but where in the past those feelings would have consumed me, they just haven’t this time. I have found it relatively easy to focus on the positives. 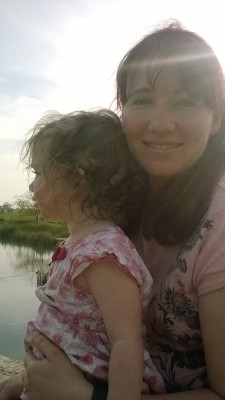 The worst thing about the PND for me was the way it changed me as a parent. I wasn’t able to be the mother I wanted to be while I was in the worst moments of it. I was tetchy, irritable, tearful and so snappy with the children. Doing anything fun with them was too much effort and the TV was on far more than I wanted it to be because it was the easy option. That was when I realised and accepted that there was a problem and that I needed help. That was why I went on the anti-depressants, and they have helped, so so much. They have helped me to be more like the mother I want to be (I’m still not as perfect as I would like haha but are any of us?).

So why do I feel this time like it may be more than just the anti-depressants helping me. Again it is so hard to quantify but where the anti-depressants have always helped there has still been times when things have been too much for me. When the kids getting messy with paint has tipped me over the edge and brought back the shouty snappy mum. When a day with little sleep or my husband not helping me as much as I wanted has resulted in me being foul and grumpy and unable to lift myself out of that.

Lately though I am more able to make the choice between being grumpy or looking past the problem to see the positives. That is the key and that is the difference between just feeling a bit down, and having a mental illness, in my opinion. A difference that isn’t easy to see or explain, a difference that perhaps you have to feel to understand. I have tried so many times in the last year (and beforehand before I accepted there was a problem) to be mindful, to choose to be happy, and I just haven’t managed it. No matter how I hard I tried I was constantly dragged back to the darkness by the simplest and smallest of things. Even whilst on the anti-depressants, though a thousand times better than without them, the darkness is often not that far away. Now though, the darkness feels smaller, more manageable.

Let’s face it, parenting can be a battlefield. You can wake feeling positive in the morning but after your preschooler having a major meltdown about which pants to wear, a baby throwing breakfast on the floor, pulling off their nappy and weeing everywhere it is easy for that positivity to be eroded. When those things happen on a day when you haven’t slept well or have woken with a cloud over you it is very hard to see the positive side to anything. Everyone has bad days, but depression can mean most days are bad days, or that on a good day, even something minor can turn that day into a bad day.

Maybe hubs’ operation has helped because I have had to get on with things. There has been noone there to pick up the pieces for me. Hubs and I both know that sometimes we make each other lazier… with the “oh they can do that” or blaming them for not getting jobs done. Not in a nasty or even a particulalrly concsious way… but we know we do it. With him out of action I have definitely noticed it as I have known that there is noone else to clear the dishes, do the washing up, empty the bins, mow the lawn etc. etc. There was no point griping about it I just got on with it. Maybe that has helped shift my attitude in every area? Or maybe it has happened at a time when the PND is subsiding. When I am able to choose to see thehappy rather than focus on being stressed.

Will this feeling last? I have no idea, but I hope so. I’m not going to suddenly stop taking my anti-depressants yet. Hubs has to go to Canada for 5 days for work in a couple of weeks so I will see how that goes first. If all goes well and the positivity remains, I will try and cut the dosage again. See what happens then. This time though it will be my choice, because I feel I am ready. Not because a Dr thinks it is time that I come off them, or because I feel like I should be able to come off them. But because I just might be ready to. I will keep you posted!