5 Months? Where does the time go? The weeks and months really are flying by and I can’t believe we are nearly at the end of March and that my baby girl is now 5 months old. Nearly half a year already! 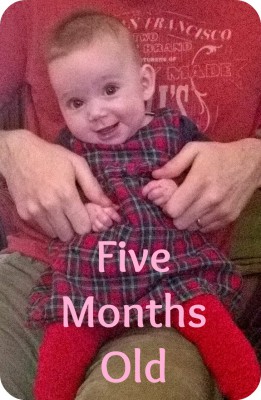 I have to admit I am glad that it is going so quickly though.. Does that sound awful? I adore my baby girl, she is beautiful and lovely and wonderful…. but man is she hard work. I guess I am just not a baby person. I am looking forward to a few months time, when she can sit up by herself, is eating some normal food, starts to get around by herself and starts getting cheekier, actually.

In the meantime though, I will stop wishing away the months and focus on what she is up to at the moment. I’m not sure how much she weighs, I meant to take her on Thurs… but I forgot, lol! She is starting to move into 6-9 mth clothes though. Mainly because she has a long body and a big head so some are getting tight. Her legs aren’t fully out of the 3-6 mths trousers, and honestly we joke that she has short t-rex arms as even with some tops that no longer fit her body, we still have to roll the cuffs up on her sleeves so she can access her hands! On the subject of clothes … she loves being naked. She loves it when we take her clothes off in the morning or at bathtime, she gets so happy and wriggly! In complete contrast to Monkey who has never liked being naked at all.

One of my favourite things about our gorgeous girl is the beuatiful look of undisguised joy when she sees her Mummy and Daddy. It melts our hearts every time and makes all of the hard work so worthwhile. When we go into her in the morning or after a nap and she sees us, she just beams. If I am carrying her up to her Daddy she gives him the biggest grins when she sees him, and she does the same to me when someone else is holding her. It really is wonderful. 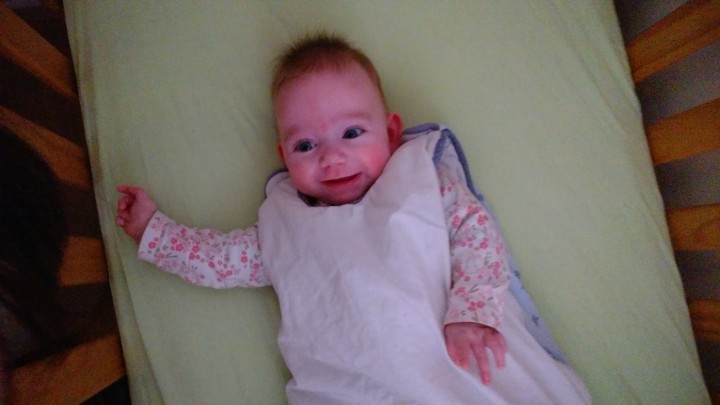 Her hair cracks me up to, it is currently growing straight up as like a fluffy mohican… which is so cute! 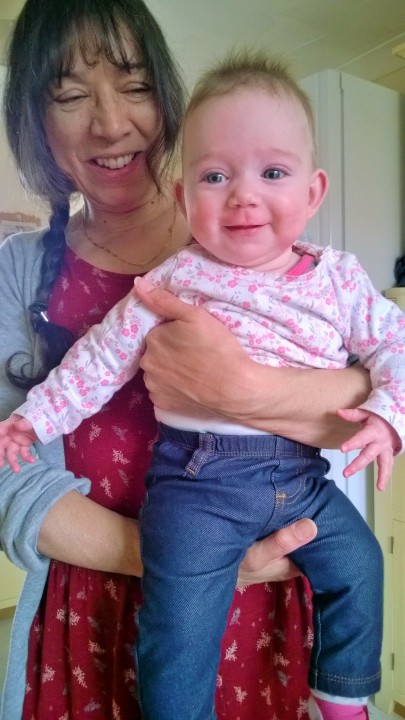 In general she is a pretty smiley baba and loves being with people. She gives so many of her family the beautiful smiles too and adores her big brother. She watches him constantly and actually it is really frustrating trying to feed her when he is around as she wants to be looking at him as soon as she hears him, even if that then makes her grumpy because she is hungry! 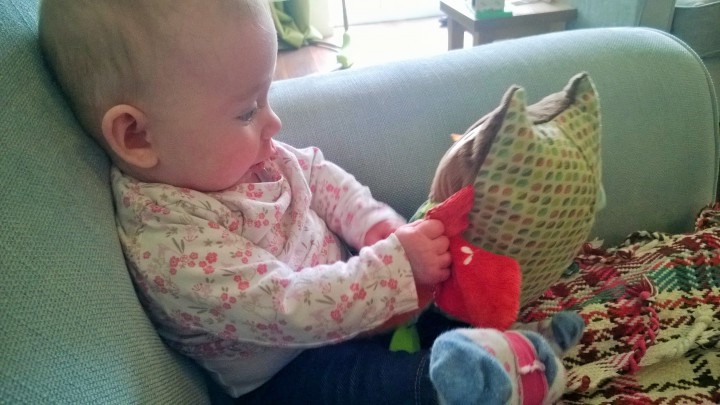 She is so alert and fascinated by everything in the world that it isn’t just her brother that distracts her. She is always looking around at everything and is really grabbing onto toys and things now. She is fascinated by the remote control for the TV and adores some of her toys cooing and chuckling at them. She also loves grabbing on to us. It is lovely when she clutches at our clothing and sometimes when feeding her, a little hand will start pulling at your lips and cheek. Or sometimes when Daddy is holding her she will grab onto his ear or beard which is very cute but not so comfy for him. 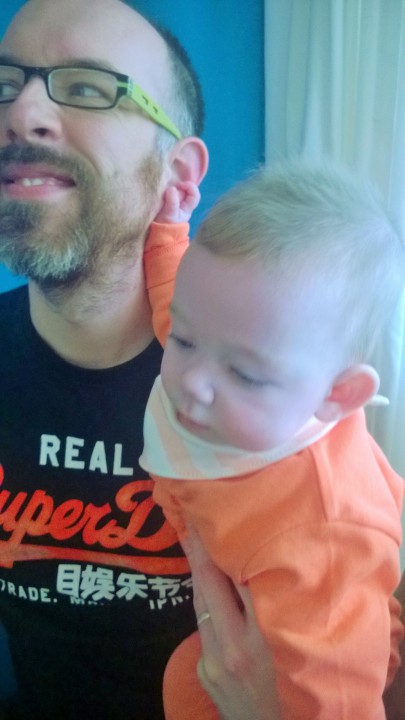 She likes to be propped up into a sitting position but still can’t support herself yet and flops forward if unsupported. After rolling once at about 3 months, she is yet to do it again!She’ll get there though I’m sure. She loves her feet and plays with them whenever she can – lying down, in the bath and she is constantly kicking them and sort of rubbing them together. We noticed this habit when she was tiny and it is even more pronounced now, she loves sort of rubbing her ankles together, crossed and uncrossing them. Basically she is a fidget pants!

So where is the hard work? Well we don’t know if she is teething or just poorly or what but she is so grumpy lately. There are times when we literally don’t know what to do other than give her calpol or baby ibuprofen. I hate feeling like I am dosing her up, so it is a last resort but it is happening fairly frequently lately because it does help her and we figure that it’s not happy pills, it is pain relief, so if she wasn’t in pain it wouldnt help, if that makes sense?

Now she is on normal formula and we don’t have to worry about Lactose free so much I tried her on Ashton & Parsons Powders, as they helped Monkey at this age, but they seemed to give her quite a bad tummy still. She has an amber anklet, which we lost for a while and honestly didn’t see any difference in her, though we have found it and it is back on in case it is helping in any way! we have anbesol teething gel which seems to take the edge off for her sometimes but is only ever a brief relief and sometimes makes no difference.

It’s just really hard trying everything and putting all of your energy into trying to help her but generally feeling completely useless as nothing seems to work. I don’t want to resort to pain meds but she is inconsolable sometimes and won’t sleep or eat and has to be attached to me constantly. Which is exhausting, mentally and physically when she is also writhing and fidgeting in my arms. It also feels unfair to Monkey when he is left to fend for himself in front of the TV and with toys strewn everywhere as I can’t give my attention to both at the same time while she is in that mood.

All of this is not helping us with her routine. On good days she does seem to be adjusting herself into a routine, that is earlier than we like, but it is still a routine, so we go with it! Awake around 530am until about 730. Sleeps until around 930 then is awake until around 12. wakes up 130/2 ish and then has a short nap around 4, which can be anywhere between 30 mins to an hour and a half. days like this i love as it allows time with Monkey, time for jobs and quality time with her. But when she is in a mess she will only sleep for about 30 mins at a time and so has 5 short naps a day and is still grouchy and miserable which makes the whole day bitty and it is hard to accomplish anything than get her through to the next nap and then grab a little sit down! 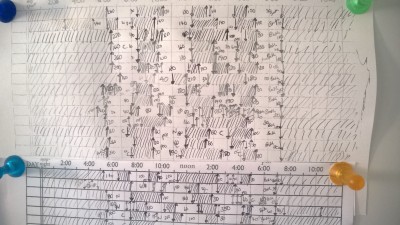 The amount of food she eats over the course of the day is about the same but the amount she eats at each feed varies massively, which isn’t great with formula as you either waste loads or don’t have enough. So we have come up with a system, we make all the bottles in advance in the morning, bottles with varying amounts in. So when it is time to feed we try and work out based on length of time since last feed (In the morning she will sometimes go from a feed at 530am until 930/10ish, but then she will want another feed around 1130, and sometimes drinks loads at that feed!) but basically end up heating up more and more until she’s finished. It makes it really difficult when planning to go out anywhere and is really frustratig if she hasn’t eaten for hours, and is frantically hungry, but then doesn’t want more than 100ml! 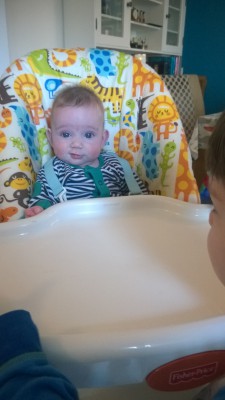 Speaking of food we are obviously thinking of weaning and had started Monkey by this point, but she doesn’t seem ready. She has had a couple of mouthfuls of baby rice but wasn’t enamoured. I started to worry slightly, I think as I was just comparing her with Monkey and what worked with him, but after a conversation with hubs I realised it’s ok. When we try and give medicine or herbal remedies orally, she automatically pushes it out of her mouth with her tongue. (Which, by the way, is hugely frustrating at times) Hubs reminded me that this is actually a sign that she probably isn’t devleopmentally ready for food yet, so I am relaxing a little. We had got the highchair down and she has sat in it a few times which is good prep but I am not going to rush her.

Wow this feels like a huge update but I guess there is just a lot going on with our little girly. I have to say I have loved writing this update. Sometimes, when she is unhappy and writhing or won’t eat or won’t sleep, I feel as if I don’t know her at all and am a useless Mummy as I have no idea what she wants. Writing this has reminded me how much I do know her, and I am really glad I have started writing these posts so I can look back on them one day.

32 thoughts on “Little Miss at 5 Months”