Its been a couple of months since I last wrote an update for our gorgeous girl, and she really has grown up so much in that time. As I type this the poor darling is snuggled up to me as she has caught chicken pox from her brother and she is really not herself. So it is quite nice to think about how happy she is most of the time! 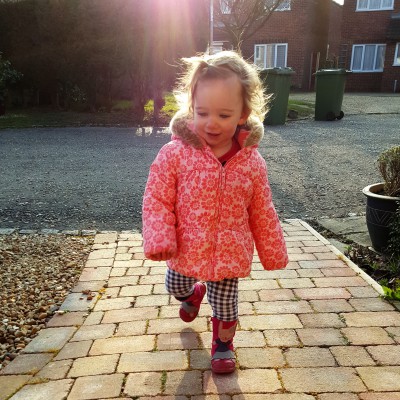 I say most as she is incredibly strong-willed which leads to some doozies of tantrums. She knows what she wants and if she can’t have it she certainly knows how to tell us she isn’t happy about it even though she doesn’t have many words yet. She is really pushing her boundaries and asserting her will a lot, which is all part of her age but it can be hard work! Most of her tantrums are because she can’t do what she wants… Such as stand on the sofa, push buttons on the laptop or walk onto a road. Some are out of frustration too as she wants to be able to do things that she can’t always quite manage. She is doing so well though.

She is really good with her hands now is really quite dextrous. She loves posting things (as all toddlers do) and adores Monkey’s Mr Potato Head and she spends ages putting things in and out of the holes. She even made a proper face the other day which I was surprised by… Though then went back to random combinations so I think it’s just the law of averages that she would have got them in the right place eventually hehe. She is also learning how to build with blocks. I’ve seen her build a tower of 4 but for the most part she likes to build a few towers of 2 or 3 arranged just so, which is seriously cute to watch. She likes things the way she likes them! 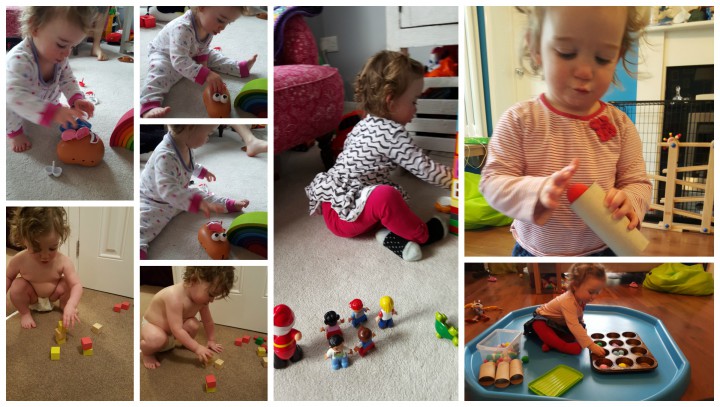 She plays so well independently too, in a way her big brother never really has. She obviously loves being played with and she almost constantly what’s me to read her stories, but there is a lot of time when she is just content to potter about by herself, playing with toys. This also goes for little soft play areas. On a recent visit to a cafe with a play area she was happy playing in there by herself for ages and then loved it when some older girls joined her too. There is no way Monkey would ever have been happy playing on his own like this at her age! He only just does it now and even then he gets bored after a few mins. She is so sociable and adores other kids and for the most part other kids love her too. 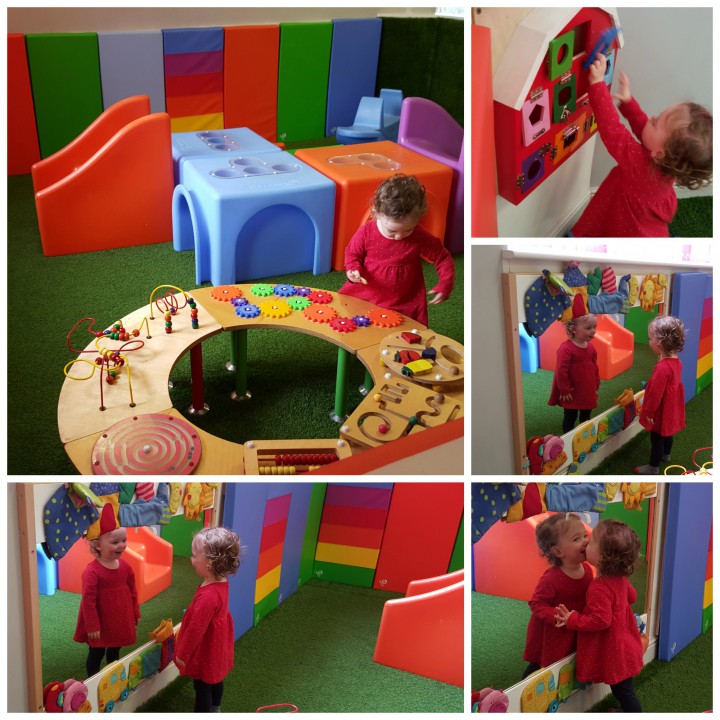 She really is an independent little miss though and when we are out for a walk she often just decides she wants to go in a particular direction and off she trots. Again something Monkey never really did as he never wanted to leave our side. It’s obviously not always a good thing and she gets in such a mard when I have to stop her going the way she wants, to you know, save her life. I mean, how dare I stop her walking in the road!?

Another trouble we have with walks is puddles. I’ve actually decided she is addicted to puddles as she just cannot keep away from them. She is generally wearing waterproofs and wellies so is allowed in puddles, but it’s like she can’t walk away from them. She tries, and she takes a few steps, then stops and looks back longingly at the puddle. She can do this a few times before running back to the puddle and starting the cycle all over again. It does mean it takes a heck of a long time to get anywhere if there are puddles about! 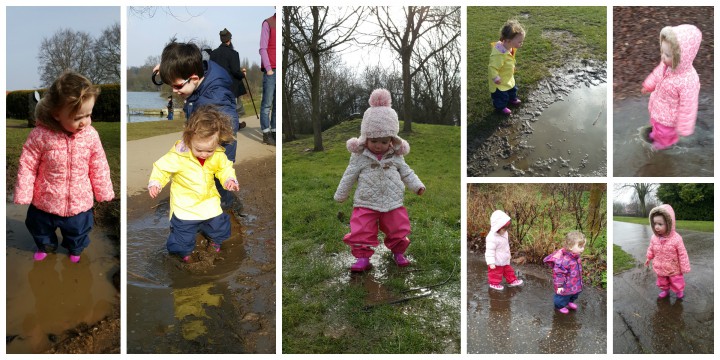 She loves being out and about though so I can’t mind too much. She often gets her coat and shoes and demands (wordlessly) that we put them on. Even if she is only wearing pjs at the time haha.She is also trying really hard to put her boots on herself and is great at getting her arms in her coat. She often presents me with my shoes too or takes me by the hand and leads me to the front door bless her.

She is getting so quick on her feet too, running about everywhere, though she also still falls over a lot and constantly seems to have grazed or bruised knees. She also spends so much time running round the living room and spinning herself. She has also even taught herself to jump! She’s only managed both feet off the floor a couple of times but we can’t believe it as Monkey was nearly 3 before he learned to jump. She loves being active, she adores swimming and being the bath and is such a little water baby.

It also looks like she may be talking earlier than her big brother did. She is very vocal and there are definitely early versions of the words, hiya, dada, (often combined to be hiyadada) and duck are the main ones but there are more and more sounds these days and she understands so much that we say and ask her to do (even though she doesn’t always listen… ;)). She also makes the most gorgeous durdle durdle noises, and I managed to get a very cute snippet of this on film one day when she was just sat playing with toy food. Such adorable little noises I know I will miss when she is talking more.

She’s shooting up and seems really tall now which has really upped her climbing on things as she can climb onto some low chairs. She’s fearless too with climbing from one chair to another and scares the bejeeses out of me at times! Oh I could go on talking about her little ways for ages I think so I will leave it there.

She is growing up so fast and while there are many things about the age that I won’t miss (such as poo in the bath, dinner thrown everywhere, the whining etc.), there are many things I will miss. The way she kicks her legs when she is happy and the way she screws her face up when she splashes herself. The sounds she makes… from growling to giggling to durdle durdle ing. The way she shouts hiya to everyone and runs for cuddles, and the way she picks up a phone and says hiya. The way she puts a blanket on her head and spins round in circles, laughing her head off because she can’t see where she is going. 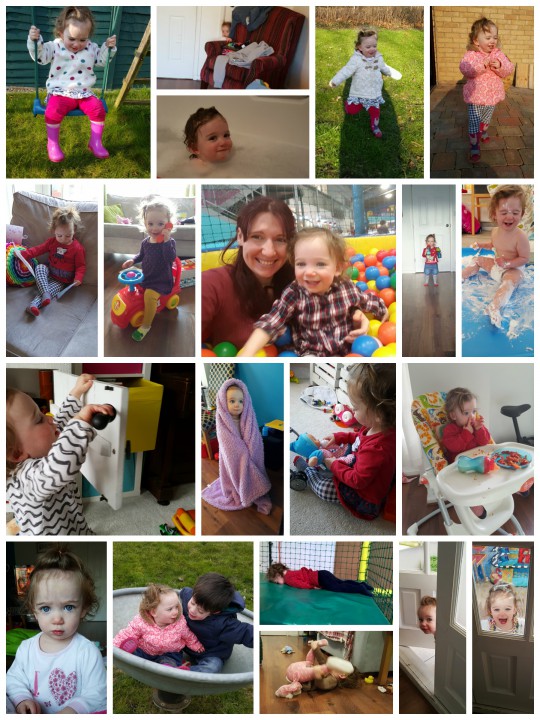 The way she sits cross legged when she is concentrating on something and the way she runs away giggling every time I come to change her nappy – especially cute when her little botty is bare! The way she shouts “duck” at every picture of a duck in every book we own! The way she closes the door to the conservatory then plays hide and seek through the glass panes. The way she loves running down hills, with even the tiny slope outside of her Granny’s house providing much merriment. The concerned look on her face if she hears someone crying, expecially if it is her brother. The way she sometimes lies face down on the floor like she has passed out. Such a randomer!

Sometimes I really wish I could bottle her up and keep her this way forever. But I know there is more fun to come too. For now I am looking forward to her feeling better and being back to her normal happy self.

7 thoughts on “Little Miss at 17 Months”