Wow, so our gorgeous, clever little lady is 18mths old. I can’t believe it as the last 6 months have seriously flown by and she really is growing into a little girl before our eyes. Our baby girl is just not a baby anymore and that’s a scary thought. 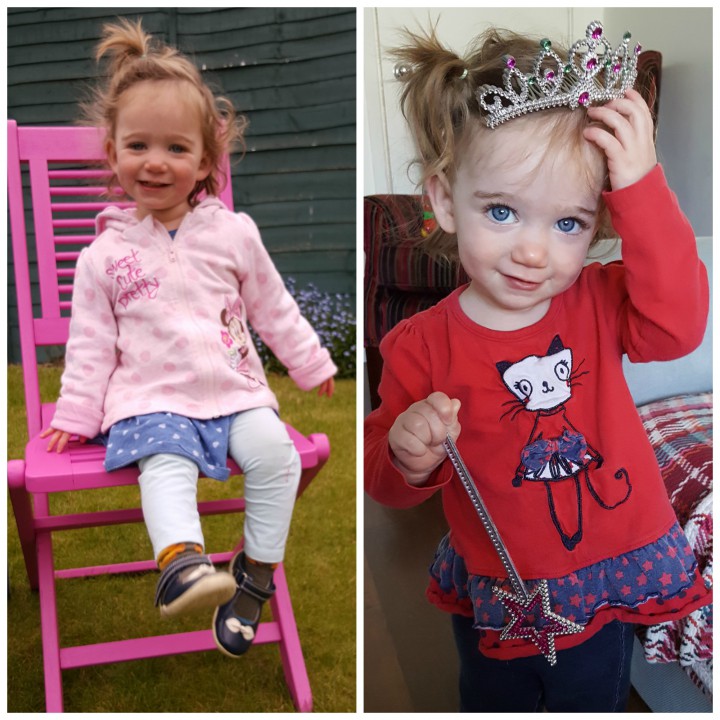 So what is she up to? Well in many ways she’s not changed that much since my update last month, but in other ways she really is developing and changing so much all of the time.

So similarities first. She is still fiercely independent and loves to go her own way when we are out on walks. She is still absolutely obsessed with puddles and it can be seriously hard to get her away from one she is having fun splashing in. Cue screaming and tantrums and kicking off wellies as she certainly knows how to let us know her displeasure! She’s also discovered daisies this month too which really slows down our walks! 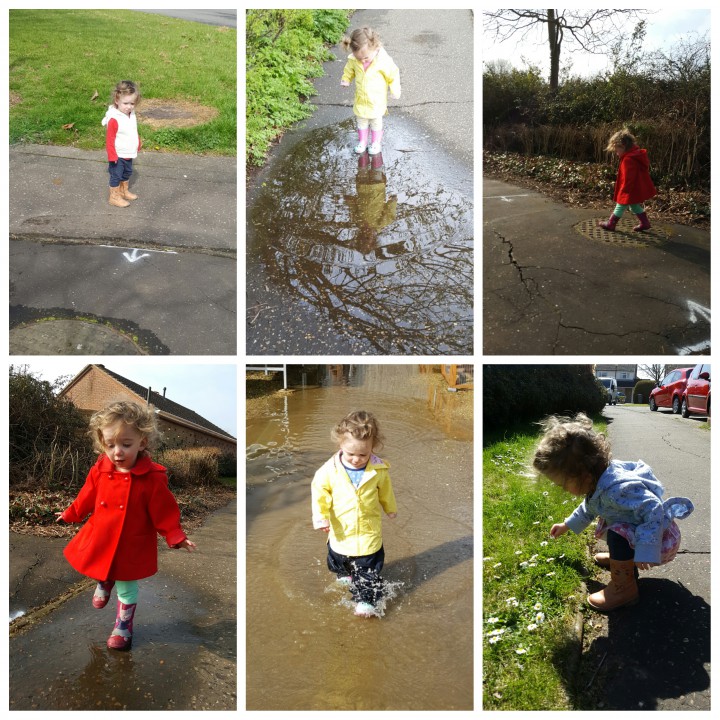 Her communication is one area where she has really developed this month. We still don’t have many words but it really feels like she is on the cusp as there are lots of *almost* words. Still duck, hiya, mama, da-de (somewhere between dada and daddy), dat (that) but also approximations of no (nananananananana at increasing volume), yes, wow, out, down, boots, and my mum is convinced she has said car too. Aside from the words she is really good at letting us know what she wants and getting us to do her bidding. She has an ‘ayow’ noise, which accompanied by a hand wave, means “get me that” or “I want that” or “hold my hand” or basically “help me with this” which we have to interpret depending on the situation!

We are getting good at this but she does expect everyone to be able to understand her too. She is such a little attention seeker actually and loves getting people to do her bidding. On play dates she will always try and persuade (by taking their hands, saying ayow and leading them to where she wants) other mums to help her, even when she doesn’t really need helping! She is such a flirt too and positively beams at people and is learning that helps her get what she wants. Especially with her softy uncles who all adore her!

She has also developed some other really cute hand movements. She loves playing hide and seek (thankfully as Monkey insists on playing at least once a day) and is so cute when she holds her hands up and looks around in imitation of us saying “where’s he gone?”. She also does a similar hand movement when she has done something she is proud of. So when she has put some puzzle pieces in, or I’ve helped her finish something, and it is lovely seeing her so proud of herself. The other hand movement she has learned this month is a high five. She loves giving people high fives and generally has to give a high five to everyone in the building! 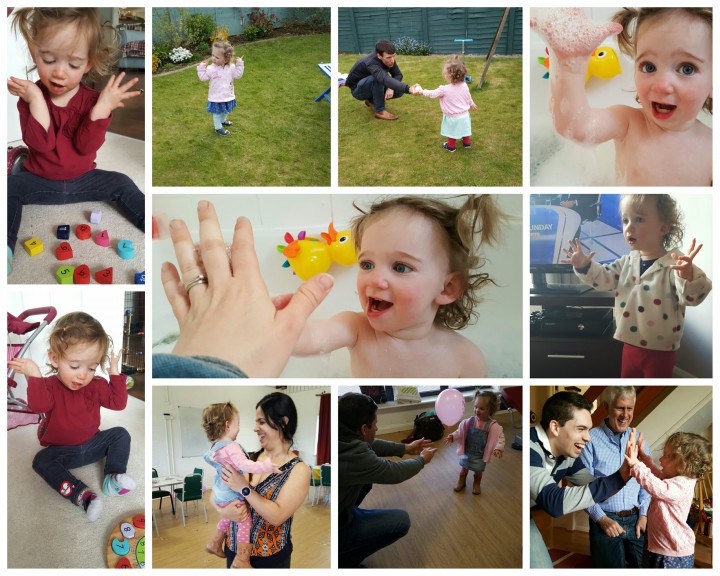 Her personality is developing so much and she loves to laugh and loves trying to make people laugh. She’s actually a bit of a show off, running around and spinning and beaming at people who come to visit. As I mentioned she is an attention seeker so she likes going up to people and messing with them. With adults she goes up with a big grin and almost throws herself at them, and with other kids, she likes trying to tickle them and messes with their hair. She constantly does this to her brother and it does make him laugh!

She loves being chased by her brother and by me, and will take any opportunity, especially at nappy change time or when I am trying to get her dressed, to run away giggling! I do indulge her quite a bit as it is gorgeous seeing her so happy while saying “Mummy’s gonna get you..” hehe. 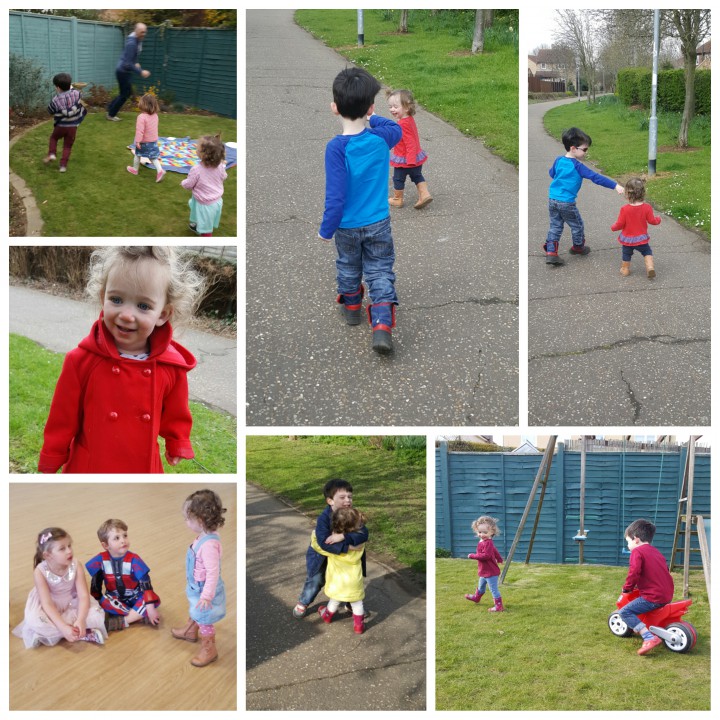 Because I have felt a bit like I baby her I have been trying to make sure I do lots of activities with her this month. I looked up the activities I did with Monkey at this age and have been trying to do similar with LM. So we have been painting and playing with play doh which she loves. I’ve also got some puzzles and very simple jigsaws out and she loves having a go at those. 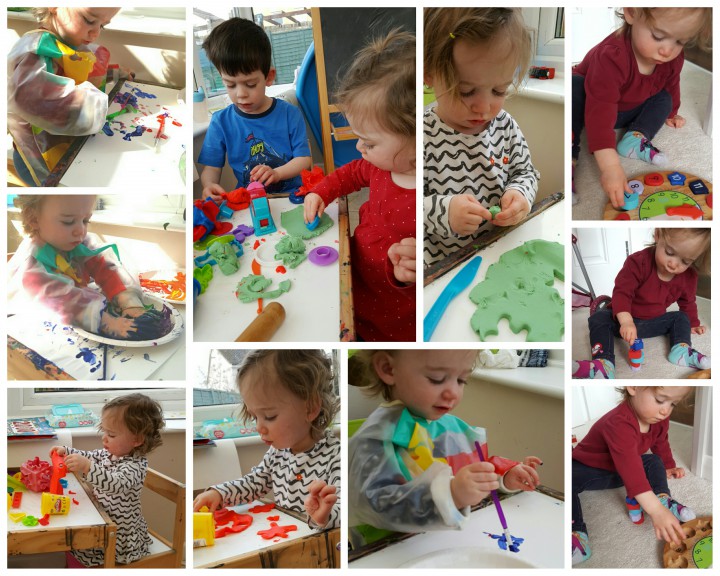 We’ve also made a bit of a change this month and have moved from the high chair to a booster chair at the big table.
She was in the high chair far longer than Monkey and has always been happy in there but lately less so. She loves sitting at the big table with us and positively beams at Daddy and I during dinner which is amazing. Food wise we are going through a bit of a fussy stage with her unfortunately. I had hoped that baby led weaning would have maybe prevented this but I really hope she doesn’t get as bad as her brother was at this age. So far she still adores fruit, ans she likes what she likes. So meals we have frequently, such as tortellini in pasta sauce, curry, Thai curry, falafel, cheese on toast, soups, carbonara etc, she loves and will tuck into. Anything we haven’t had for a while or anything new she just will not try and it generally ends up on he floor. Seeing a plate of lovely food fly across the room is so frustrating but I am trying to rise above and give her just one or two bits at a time to throw and hope she gets the taste for it! She’s even started pulling apart trusty fish fingers so she will eat the breaded bits around the edge but not the fish despite previously loving them. So frustrating! She does have a good diet so I am trying not to stress but it drives me mad too and I hate having such fussy eaters. 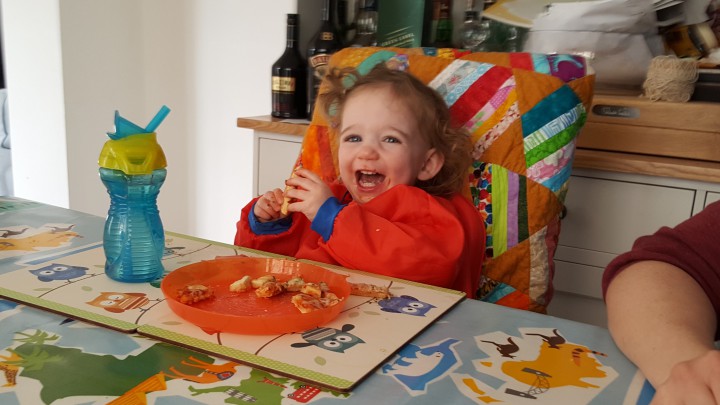 Anyway back to happier things, as I mentioned above she loves puddles but basically she loves water in all its forms. She adores water play and watering the garden. We have done water painting which she was brilliant at and she adores bathtime fun in the bath. To be honest she would be happy playing with water most of the day I think haha and at least it is an easy activity to clean up. 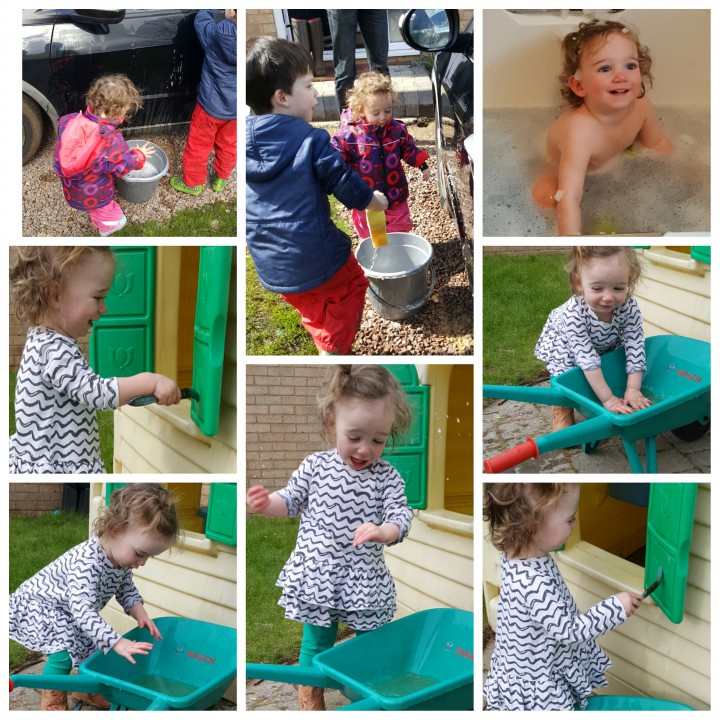 She also adores just going for a walk. She frequently finds her wellies or a pair of shoes and is actually amazing at getting them on herself which I am dead impressed by. She then presents me with my shoes and I know it is time to go out. She can walk for ages and we have braved a few short walks without the buggy as she can walk a good long way now when she is in the mood. The buggy does help though if I need to get her away from a puddle! 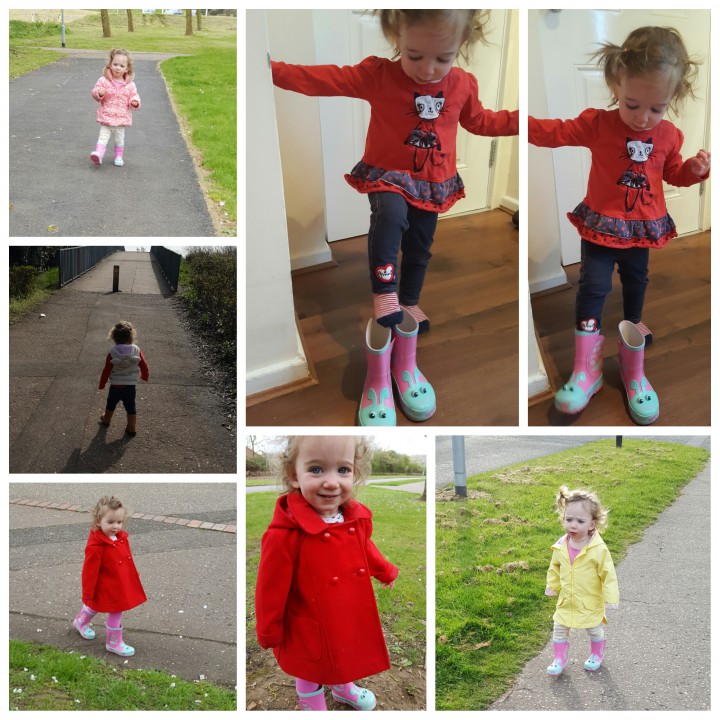 She loves visiting our friends next door who have a trampoline in the garden and she lives bouncing on there. Their 8 yr old is also really really good with her and gives her loads of attention which she also loves. We joke that she is going to be a gymnast when she is older as she loves being upside down and being flipped over and helped to do role poleys. It’s a bit barmy actually as she even likes lying back and being upside down in the shopping trolley, looney girl! She loves climbing and unfortunately after copying some older children now likes climbing up the slide, which means I have to really watch her and make sure she goes up the steps rather than the slide itself! She’s also teaching herself how to use Monkey’s scooter which is cute and a bit amazing to me as Monkey’s only really got good in the last year. They really are such different children. 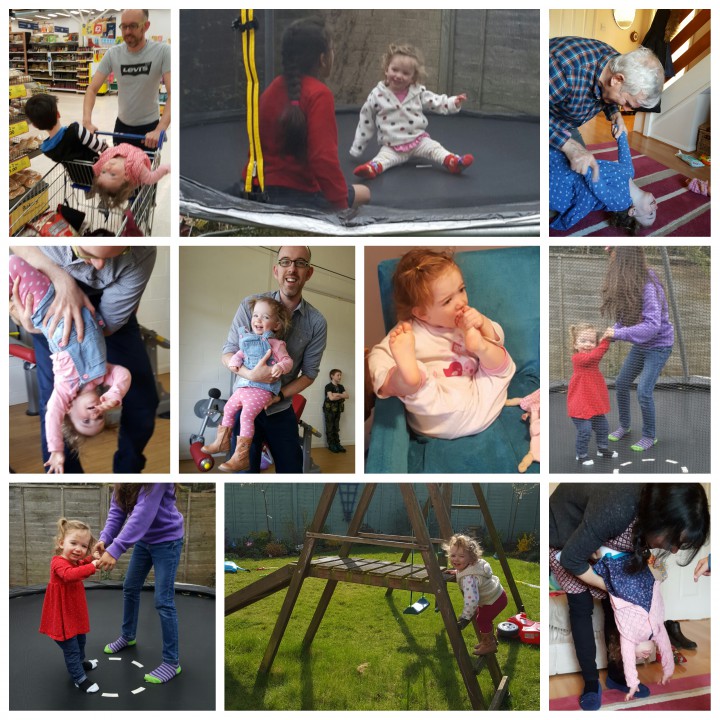 These updates are never the most eloquent of prose as I keep adding bits as I remember them, and I know that they are a bit picture heavy, but I hope one day she will like to read what she was up to at this age. She is a force to be reckoned with at times and has the loveliest smile that just melts the heart of anyone she bestows it on. 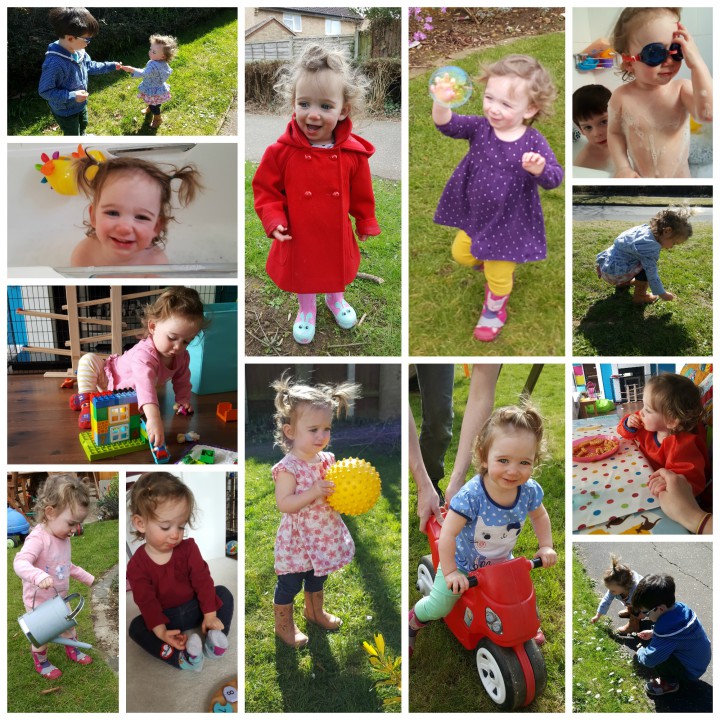 She drives me potty at times but I adore her all of the time.