Monkey is doing and saying so many things at the moment that I really want to capture and remember. Rather than write a specific post about them all individually, I thought it was time for another mini milestones post – even if it is more of a summary of his cute (and not so cute) behaviour rather than specifically divided into areas of development as I have done previously.

After being a little slow on the speech development side, Monkey now chatters and sings pretty much constantly and it is really lovely. There are still occasions where we aren’t sure what he is saying, but for the most part he is pretty clear, and his pronunciation is getting better all the time. He still struggles to pronounce his Ls and they come out as Ns but when you think about how you say them, they take a pretty similar tongue movement so I am sure he will get there!

He is so polite and really learning about when to say please and thank you, although please sounds more like “twease” sometimes!  He has picked up a really very cute habit of saying”you’re most welcome” when anyone says thank you, which melts a few hearts!

Other favourite phrases are “my turn” (shockingly) “don’t want to” (again no big surprise) and it has taken a lot of effort to stop him announcing “Merry Christmas” and “Happy New Year” to everyone we come across!

He has started saying “Hello there” which is pretty adorable and loves telling us “I love that” when he really likes some food or some activity or something. The other morning he came downstairs and said, completely unprompted “I love you daddy, I love you mummy!” Which melted our hearts.

He keeps trying to get away with calling us Mum and Dad instead of Mummy and Daddy and we are not ready to accept that yet!!

When he does something that makes us cross or upset he looks at us and says “Make happy now” as he really doesn’t like us being anything other than smiley bless him!

He sings all the time, with the alphabet song being his favourite, though he also loves incy wincy spider, twinkle twinkle little star and well most nursery rhymes really! 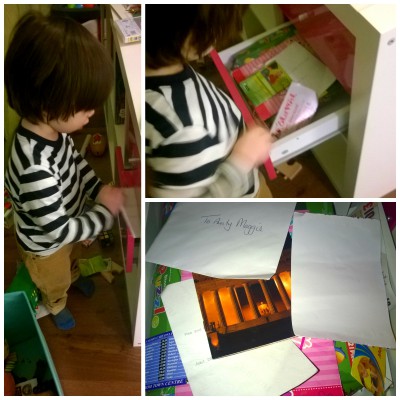 Monkey has always been a fan of Postman Pat so be extension he loves anything to do with post. he runs to the door to get the post for me every morning and loves letters, parcels etc. He has a toy area behind our sofa with cubby holes, boxes and a couple of drawers. One day I saw him pick up a DVD insert and go trotting off behind the sofa with it saying something about post. Intrigued I had a peek and he has decided that one of his drawers is a “post office!” It’s hilarious and there is all sorts of bits and bobs in there, taxi leaflets that have been pushed through the door, old envelopes, dvd inserts, all sorts and every time he finds a bit of paper lying around he goes “ooh post” and pops it into his post office. It’s hilarious, I just love it and now we know where to look if we ever lose something!!

He doesn’t need a nap every day now, which is good as with two afternoons a week being at playgroup, he can’t really, but if he goes for a couple of days with no nap, he gets very very testy and we have the mother of all meltdowns. He has always been a child that relies on the right balance of food and sleep to make him happy and it still makes a huge difference to his temperament if he is hungry or tired! When he does nap, he cans till sleep for around 3 hours between 2 and 5 and then still goes down to bed and sleeps through the night from around 7.15-715. It’s bonkers really but it works.

His two loves of doggy bear and blankie have been companions at bedtime for a long time. Gradually he has taken to a few other teddies and now he has loads which he loves. They all have to be present at bedtime and there has been times where they have all had to come downstairs after his nap, though we are trying not to indulge that too much as there is a lot of teddies to cart about! Sometimes though he has a little ritual where Mummy Teddy, Daddy Teddy and Doggy Bear all have to be tucked up under blankie before he will go to sleep. So cute! 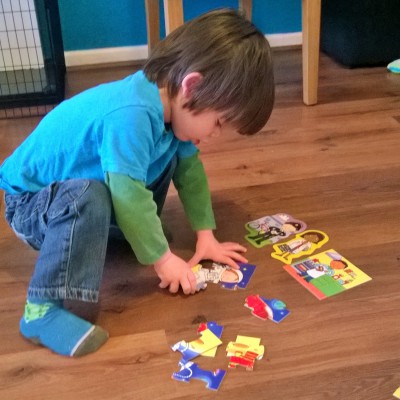 Monkey is obsessed with Jigsaws at the moment. We got him a fab set for Christmas from the ELC which has 10 jigsaws all at slightly different levels of difficulty. He started off a bit unsure but all of a sudden he can now do 5 or 6 of these entirely by himself. The ones that are more than 2 rows high seem to daunt him a little bit but the others he just loves and does them so quickly now it is incredible!

Our little fusspot is still very up and down with food, we had a real low patch where he barely ate any evening meals, then we reinforced our behaviour and he seemed to do better for a while , but now we are in a dip again! He has this awful habit at the moment where he will put food in his mouth, but then won’t eat it, just leaving it sitting there for ages and ages and eventually he wants to spit it out – which I have to admit really winds me up as I think it is disgusting! Sometimes he will store it for ages then randomly swallow it which I don’t really understand but prefer it to spitting it out.

It winds hubs and I up no end though and we do all sorts of bad things, bribing, threatening, cajoling,  and nagging to get him to eat. I know it isn’t right but hey we are not perfect people and we really do try, but sometimes it feels like the only tactics that work! The randomest tactic that works is using his Postman Pat toy, putting on a deep voice and having “Pat” talk to Monkey and ask him to eat it. He responds well to that a lot of the time – the power of Pat!

Now this may sound like I am bragging and I don’t mean to, I am just really proud of our boy and think he is really clever. I have no idea what is normal or advanced for his age but I am just really proud of him, he’s like a little sponge soaking up knowledge! He knows all of his alphabet and switches been phonics and letter names for most letters. He can recognise his own name written down and when playing with letters can even put them.in the right order for his name sometimes.

He knows loads of colours and when I asked him what colours he wanted to paint with the other day, he recited them in rainbow order, red, orange, yellow, green, blue, indigo, purple lol! Then added pink on the end too 🙂 so with a little help we then made s rainbow picture! Before mixing them all up and doing lots of brown splodges and hand prints :). 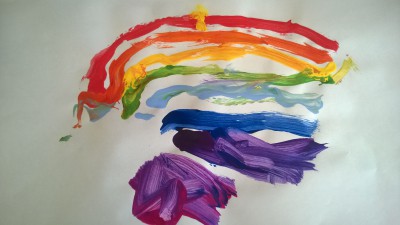 He is really good with shapes and points them out all over the place, pointing at a door and saying rectangle, a 20p piece and saying hexagon, an old teething ring and saying oval. He still loves numbers and recognises up to 100 though occasionally gets them mixed up,so for example if he sees 63, sometimes he will say 36 instead, but not every time. He is also really good with his left and right and he gets that right nearly every time which astounds me as I still have to think about which is which, my brain just can’t get it at all so the fact his does really impresses me!!

I feel like I could go on forever about our gorgeous boy but I think this post is long enough! Needless to say though I adore him and even though he really pushes my buttons sometimes I am so so proud of him every day as he is just a lovely little boy 🙂