For a while now I have been thinking about taking Monkey to see a show, and wondering how he would get on. There are so many great shows out there aimed at kids but none of the big ones seem to come to our nearest theatre and I was loathe to take a big trip to one for him then to hate it and want to leave immediately. Shortly after Christmas Auntie Ericha called with a leaflet from our local theatre giving the names of a few child-friendly shows, and, after a bit of umming and ahing I decided that it was worth a go. So this weekend the three of us (Monkey, Auntie Ericha and I) headed off to the theatre for Monkey’s first ever show! 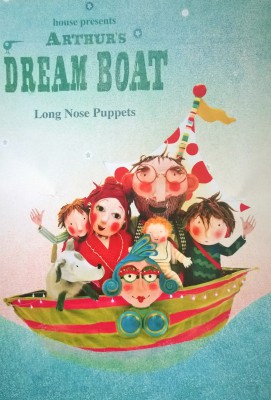 We went to see a puppet show called Arthur’s Dreamboat, which is aimed at ages 2-8, perfect for Monkey at 2 years 9mths. It is about a boy named Arthur who has a dream about a wonderful boat. He wakes in the morning and wants to tell his family about his amazing dream but they are all too busy to listen to him. He has a boat on his head that grows the more people he tells and eventually the boat gets big enough for all of them to sit in!

Monkey did really well at the theatre, he sat really quietly to wait for it to start although he did keep asking how long it was until it started, thankfully it only started a few minutes late, when most of the stragglers had arrived! When the lights went out he wanted them to be turned back on but thankfully was ok with the dark once the show started. The little boy behind who I guess was a similar age got very unhappy at the darkness and cried his head off – I did worry that the crying would be contagious but he did really well and thankfully the little boy behind us calmed down too.

One of the first puppets to come on was a dog which Monkey did not like “don’t like that” and again I worried that this was the beginning of the end. Thankfully though he did enjoy the people puppets and when they were on he sat mesmirised watching and listening… but every time the dog came on, which was supposed to be funny, Monkey hid bless him! Not sure why really, most of the other children seemed to love it! 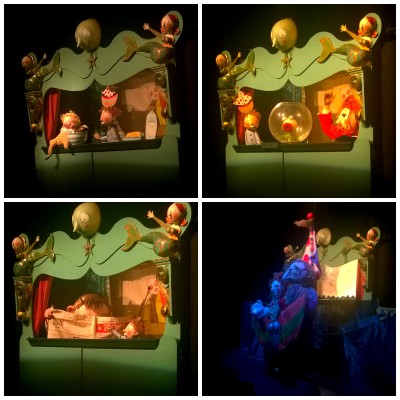 There is a bit where Arthur’s baby sister was hitting a lobster and Monkey really chuckled along. He was grinning away too, though it was so difficult to get a good shot of him in the dark I did manage to get a few pics! 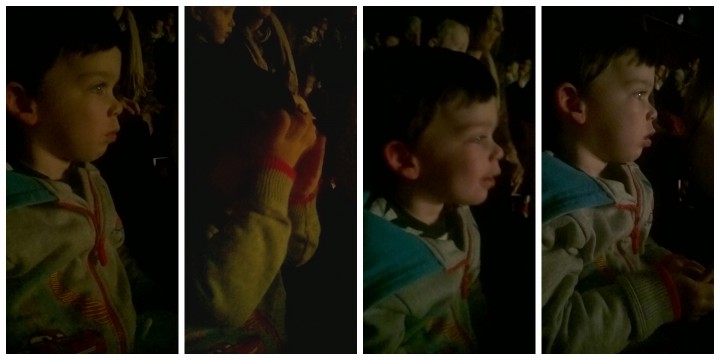 We had a lovely time and I think he did really well as it was a totally new experience. It was 45 mins long and that is about the longest he has ever sat still, even when watching his favourite “postman pat film” at home he is usually up and down and all over th eplace while watching it so this was really good. Maybe we aren’t too far away from taking him to see a longer show, or even to see a film at the cinema!

8 thoughts on “Monkey visits the Theatre!”