I feel that Monkey is learning so much all of the time lately, that I need somewhere to record these little milestones (the lovely ones … and the less lovely ones). So I have created Monkey’s Mini Milestones – so every now and again there will be posts like this! Mainly a way of charting Monkey’s development, and his likes and dislikes!

Monkey is being very chatty lately, most of it is still undecipherable but he is really trying to talk to us!  Some of the words we do understand are:

Yum yum
Go
Two
Shoes
Oh dear – after yum yum this is his favourite phrase, very cute as sometimes it sounds more like oh doo or oh doh but when it is accompanied by his hands to his mouth it is very lovely!

Last week, while enjoying the sun with my neighbour he managed to make his first bubbles! He doesn’t really understand blowing yet but he after a little experimentation he learnt to dip a ring in a bowl and wave it around to create bubbles! Simple thing I know but I was a proud mama watching him figure out how to do it! 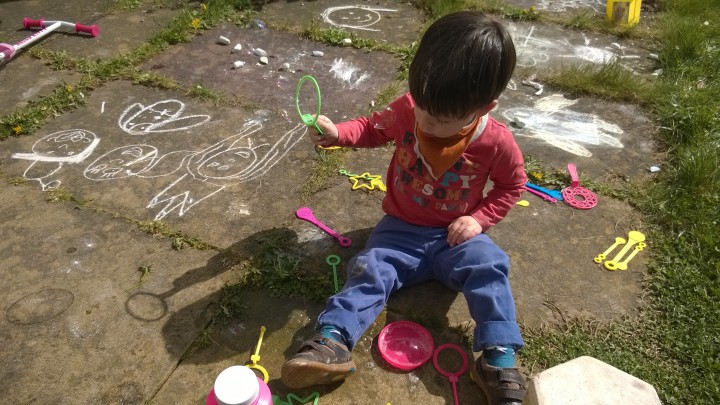 He loves giving high fives and now sticks his thumbs up (previously he held up 1 finger instead). He tries to count on his fingers, at a birthday party during the games, daddy was telling him so and so had ‘won’ and Monkey kept holding his finger up, as if to say ‘one?’  He loves numbers and likes pretending to count. He basically points at things in a row making lovely noises like ah, noo, mah, buh etc, so cute! He loves clocks and things too and is just fascinated by clocks and numbers.

Whenever we are out and about and he hears an aeroplane, his hand goes over his hear to indicate he has heard it, and then he HAS to find where it is in the sky. He very often spots them way before I do, even when they are tiny and far away! Clever monkey!

He is such a good climber, and has been for a while but we are proud that he now finally understanding how to climb backwards down something, rather than essentially leaping off hoping to be caught!

He still loves Wind the Bobbin, of course, but he has a couple of other new favourites too:

Row Row the boat – he can be seen standing by himself rocking backwards and forwards, which is v cute, and at every opportunity he commandeers Mummy to do it together! He’s getting very good at the Lion roar too hehe

Monkey loves books, always has done and we have loads, and it is funny seeing some go in and out of favour! His favourites at the moment are:

Zaza’s Baby Brother – we’ve had this for ages and he was never interested before, but at the moment he is obsessed with it – I wonder how much he understands about me being pregnant, it does seem like quite a coincidence though!

Pig in the Air – This was one of daddy’s books as a child and Monkey adores it! He giggles his head off at the clumsy piggy falling over while trying to fly, says ‘go’ when he takes off, and ‘Oh dooo’ when he crashes into a tree he he. It is funny, I confess to being a bad mummy though and trying to hide it after reading it about 5 times in a row – I love how much he loves books, I do, but it’s exhausting re-reading them over and over!

He’s been increasingly fussy again lately so we have been reevaluating snacks etc to see if we can get back on track a bit. He’s so stubborn though and knows where all the snacks are in the cupboards and of course wants them all the time instead of his meals. Joy! We need to look at what we are doing too and try and get back to following the rules that helped us before!

Cars, train, helicopters, BUSES, basically  anything transport related is a big fave at the moment, particularly his Postman Pat cars! 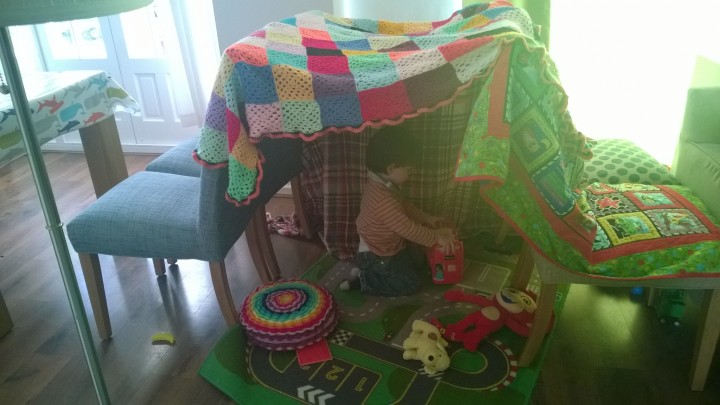 He loves dens at the moment, particularly with my Granny Square Blanket as the roof (which I love!). He is so good at building with Duplo now and he also made a fantastic tower with his blocks the other day, clever little builder! 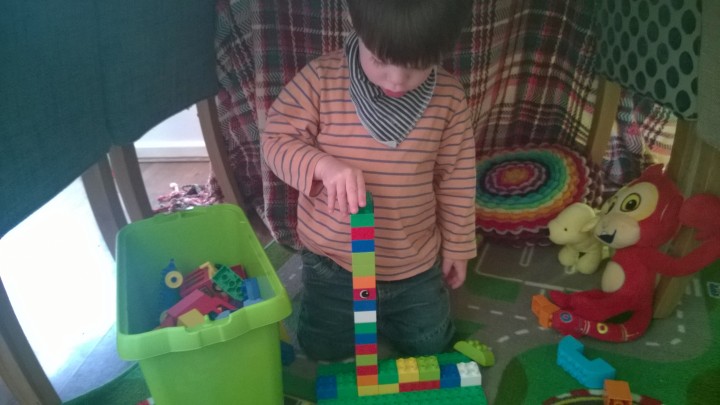 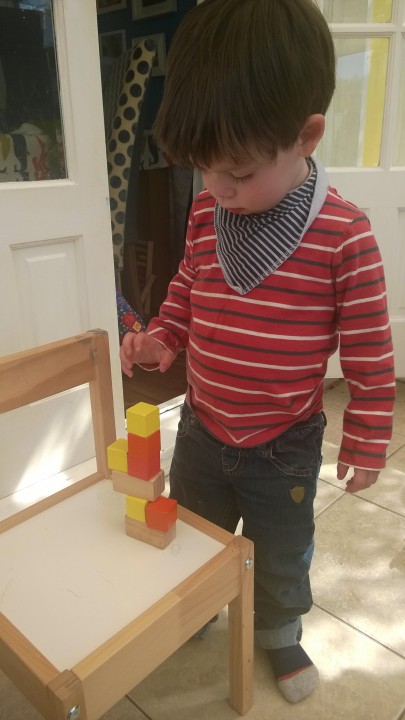 Monkey has two very definite favourite colours at the moment – red and yellow! He is getting good at matching colours in general but red and yellow are definitley the faves. When we are playing with multicoloured things he always finds the red and yellow ones and holds them up for us to label. Even in a craft shop last week he suddenly produced a red pen and a yellow pen from a display behind us! Seriously obsessed – not sure but maybe it comes from his love of Postman Pat? 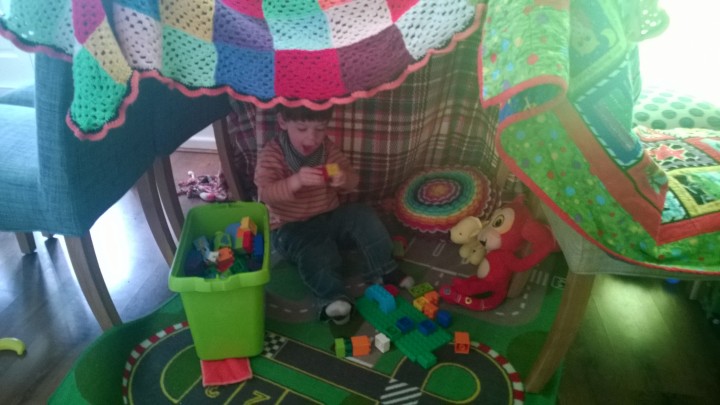 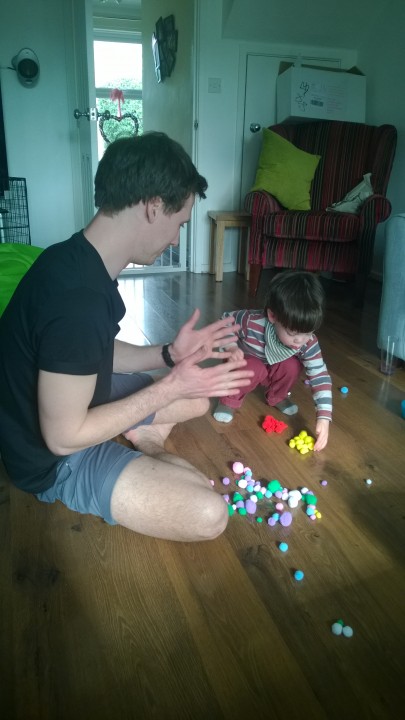 He has taken to picking things at the moment – picking his nose, picking the wax out of his ears, picking at his bathy crayons, picking, picking picking! Yuck!

He is extremely stubborn. This isn’t a particularly new thing but he is insanely stubborn at times and gets himself so worked up when we say no to things but he does not give in. For example if we say he will get pudding if he eats one more bite, there is no way he will take that bite. None. Absolutely zero. So he doesn’t get pudding but it makes for some miserable stand-offs!

So that is some of the things I can think of that sum up Monkey’s development right now! I love seeing him grow into his own person with his own mind – even though he drives me crazy sometimes! How do you keep track of your mini milestones?