Sadly the bank holiday weekend just gone has not been a very fun one for us! It’s a tale of two halves so I will start, surprisingly enough, at the beginning, and then the rest will follow in a subsequent post.

Being ill is never fun at the best of times, but I have to say, being ill when you are pregnant seems doubly bad. For a start, you can hardly take any medication when you are pregnant. The only painkiller you’re really allowed is paracetamol, and I can’t be the only person who finds that paracetamol has a limited effect on a stonking headache or if you feel really rough or in pain. It may take the edge off a fever but behind that, it almost feels pointless to me to take it. Everyone is different though, I know.

If you have a cold, you can’t take any decongestants, so that is most cold remedies out of the window, and with nearly everything else you are told to check with your doctor, who invariably recommends you not to take anything if you can avoid it (obviously with exceptions). I understand why, after all, no-one, and I mean NO-ONE wants to test drugs out on pregnant women to see what effects they have on your baby. Understandably no pregnant woman would want that either, but it is really difficult when you are feeling rough and pregnant, and there is basically nothing you can do about it.

The main reason it is harder to be ill when you are pregnant though, is the obvious fact that you are sustaining the life of a growing human being inside you. So while with any illness at any time, you may feel weak or drained, when you are pregnant, this is compounded, as the baby still needs to take all the nutrients they can from you, leaving you with even less. Add to that the dreaded hormones which can make you react to things much worse than normal anyway, as I discovered this weekend…

Friday had been a lovely happy day, in the afternoon my little bro came round to play with Monkey as he does every other Friday after work. I was feeling really tired at this point and a tiny bit nauseous, but, honestly, that’s nothing new with this pregnancy. The 4.30-6pm time is generally a bit rough for me at the moment and I am quite often tired, woozy and occasionally a bit nauseous so I didn’t think too much of it. After my little bro went home I asked hubby to see if he could get out of work a little early as I was really struggling with the thought of cooking the tea. Again, not hugely out of the ordinary as the previous time I had cooked meatballs, I had felt a bit sick, so I assumed it was just all part of the pregnancy fun.

But, well, to cut a long story short, it wasn’t. I started throwing up a couple of hours later. I have suffered in the past (pre- being pregnant with Monkey even, and during my last pregnancy) with acid reflux, which when really bad made me very sick, so initially I thought it may be something like that. Then it got really bad and I was throwing up any tiny sip of water and even if I had nothing the throwing up was approx. every 20-30 mins apart. Then the diarrhea started and by now I knew something was actually wrong. Tummy bug, bad food, no idea, but not just normal.

The next morning we thought I was a bit better and I tried some food. Soon enough though the vomiting started again and as I had nothing left in my system I started vomiting bile, first yellow, then a horrible dark green colour, which smelt bad! Really really sorry if that is too much information, that is the worst I will tell you.

I have had food poisoning once before (many years ago travelling alone in a hostel in Peru, it was not fun) and I know that these things will generally sort themselves out. But there is a big difference in that right now I am pregnant. We are told to not eat certain things as certain bugs can be dangerous for the baby. I have no idea what bug I had but all I did know was that by now I was seriously dehydrated and knew that again that couldn’t be good, but also didn’t really know how/if/when it would be a problem for the baby.

So I called the NHS 111 line and spoke to an out of hours GP, and got an appt with them at the out of hours centre. The Dr I saw was concerned by how dehydrated I was and with the frequency of the vomiting and was worried that if he gave me any anti-sickness medication then it would basically come back up again. The alternative option was a trip to hospital. He called them and they wanted me to go in, potentially to stay overnight.

I was sent to triage on the delivery unit as by now it was Saturday evening, and after being assessed by midwives and a doctor (and listening to my baby’s heartbeat, which was a huge relief!) we were asked what we wanted to do. I could have stayed overnight to be rehydrated and receive anti-sickness medication, or I could get an anti-sickness jab and rush through some fluids to hopefully break the cycle so I could go home. I’d always rather be at home in my own bed so we chose the latter. The important thing really was knowing that the baby was fine and wasn’t going to be harmed by my being ill.

We had a good chat with the midwife who told us that basically if anything, being pregnant just made me feel worse. She said the hormones would probably have made the vomiting worse in the first place, and then because the baby is still getting everything he/she needs, I was being left with even less sustenance to keep myself going. Not very fun but at least the baby wasn’t suffering at all as a result of it. 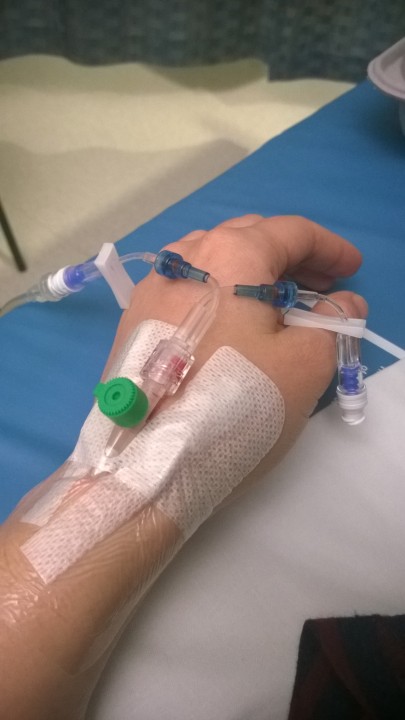 I had a really painful injection in my bum (never realised how painful jabs into that muscle are before) and a lovely cannula on my wrist for the IV and then started receiving the fluids, which made me freezing cold! Particularly in my arm, brrr! Hubby was with me (grandparents looking after Monkey in bed at home by now) and we took the opportunity to talk babies’ names. It was really odd being on the delivery unit as women were coming in with their contractions, we could hear the midwife on the phone reassuring expectant mums, and every now and then we would hear the cry of a newborn. Really quite surreal being there, when I barely even have much of a bump!

Thankfully after a couple of hours, when the bag was empty, I was feeling a lot better, and though I was still dehydrated, I hadn’t thrown up in all that time and had a bit more colour in my cheeks. I was again given the option of staying overnight but wanted to come home and so far I have been a lot better since. It’s taken a couple of days of not really eating very much so I am still really tired and drained. Sitting writing this I don’t feel too bad but I know when I get up to do something I get tired really quickly.

Unfortunately though, the drama of the weekend was not quite over….. to be continued...

43 thoughts on “Poorliness in Pregnancy”