Some time ago when browsing Pinterest for things to do with the Monkey (thanks Jocelyn for suggesting it, there are so many ideas on there) I cam across a picture of people Ice cube painting. Now when I said that to hubby he thought I meant painting onto ice cubes, which, lets face it, would be a bit ridiculous and pointless. Nope, ice cube painting is painting with ice cubes. The blog I read talked about mixing some paint with water and freezing it. I thought that food colouring would work just as well, and be safe for monkey, and have been waiting to have a go.

Now it is the summer holidays and none of our baby classes are running for a couple of months we do have a bit more spare time to feel so I set about making up some coloured ice. I used a mixture of gel and liquid food colouring as I wasn’t sure how they would turn out. I used a bit too much of the pink gel one to start with (see the really dark coloured ones!) and learnt as I went along, anyway, I think they turned out ok in the end. 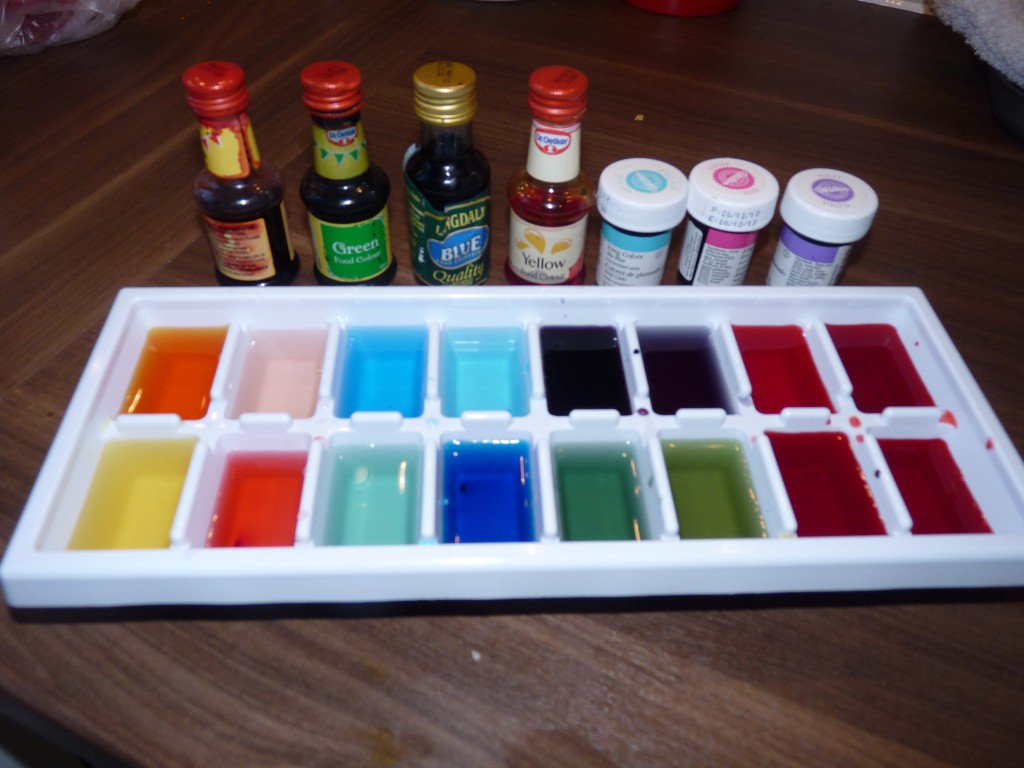 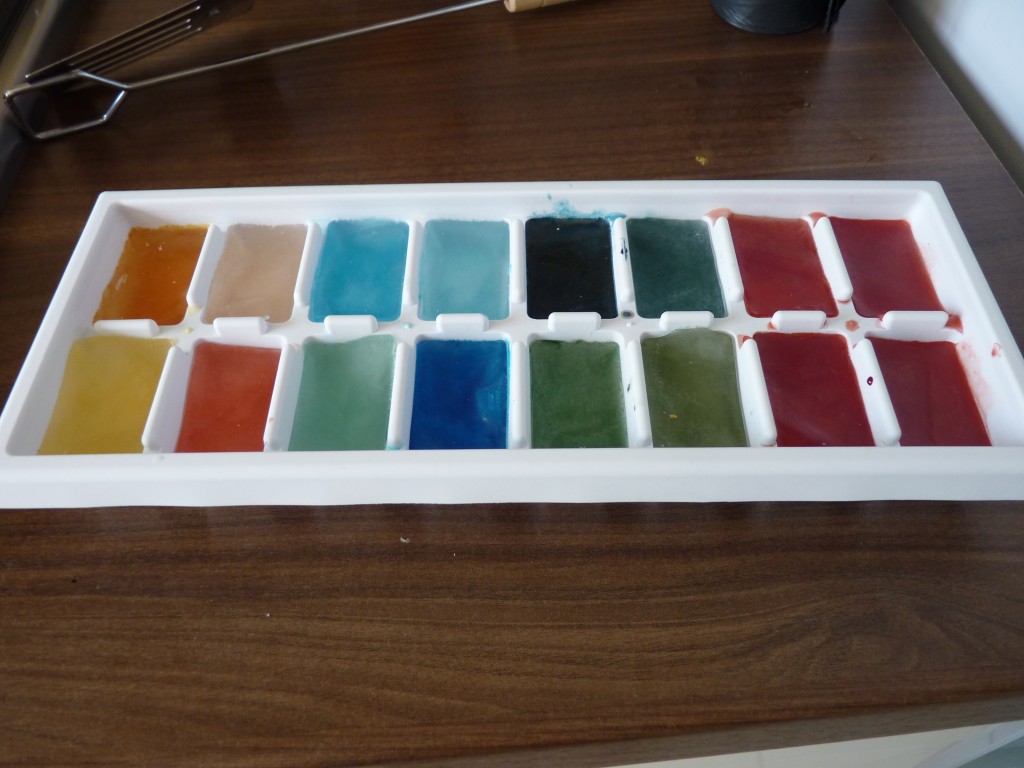 I have seen recently pictures where people have frozen them with lollipop sticks in so you can have a handle, and I can see how that would work, but I didn’t have any, and I also am not sure if Monkey would then think it was an Ice lolly!

As it was so hot today and we were at a bit of a loose end this morning I decided this would be the perfect time to give it a go. I just got a few ice cubes out in case he hated it, as he does take a few tries at some things, and decided to use an old sheet to paint on, as I guess paper would go soggy pretty quickly! 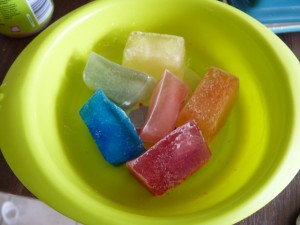 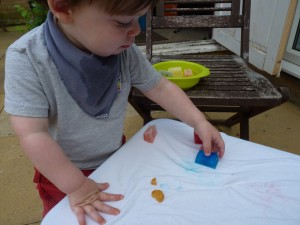 Monkey actually took to it pretty quickly. He finds ice lollies quite amusing and I think he had the same kind of feeling with the ice cubes. One of them turned his hands a bit blue which he found really interesting, and he then pressed his hands onto the sheet (makes me think it’s time to try finger paints again). 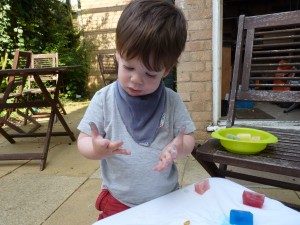 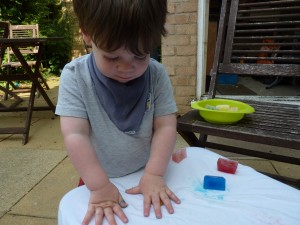 He played with it a bit and then wandered off to do something else, and then came back again. Let’s face it, at this age, attention spans of more than a few minutes at a time is good going and he did definitely enjoy it so we shall be doing it again I am sure. 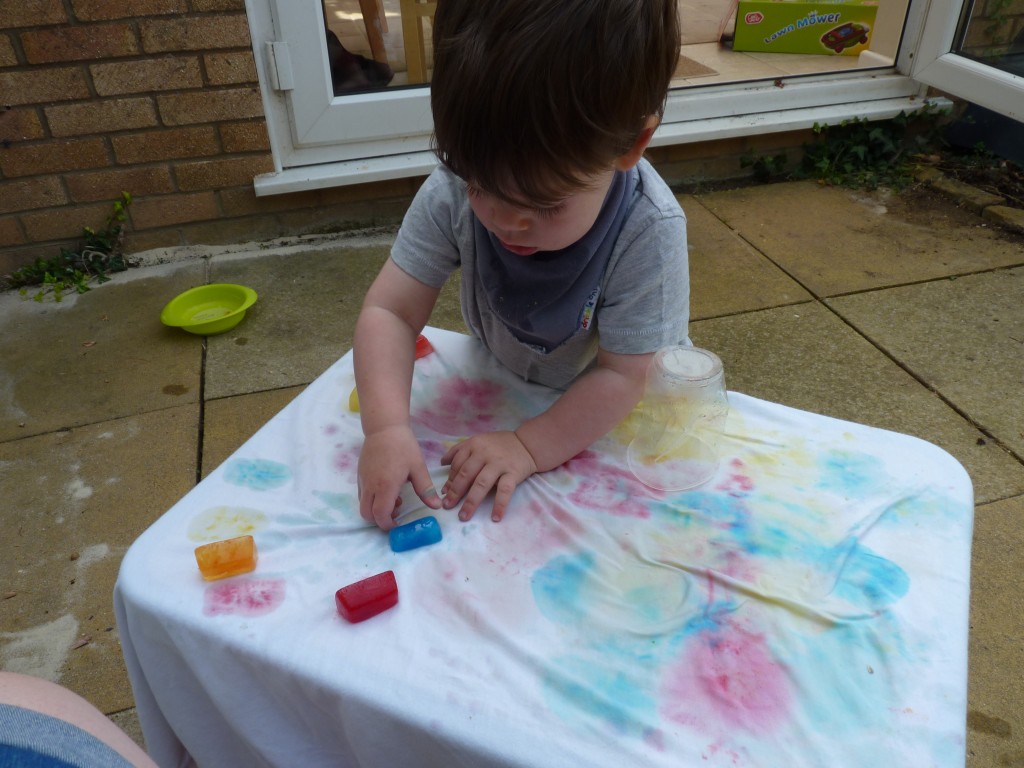