The clue is in the title really but Monkey loves kicking up leaves! My regime of making sure I tire him out enough to nap well and sleep well is working and involves a lot of time wandering about outdoors.  Actually I think that was just a blip as his naps are basically back to normal now, yay! Sorry, sidetracked, yes lots of time walking outdoors. When my mum (Nanny) and I first showed him kicking up the leaves he looked at us like we had gone mad, but lately he loves it! As you can see in the pictures 🙂 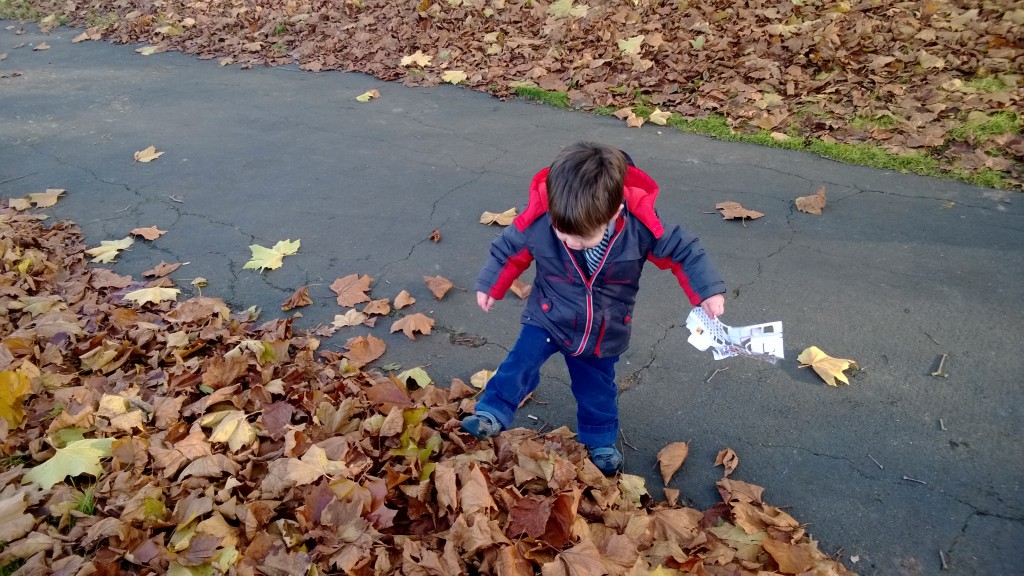 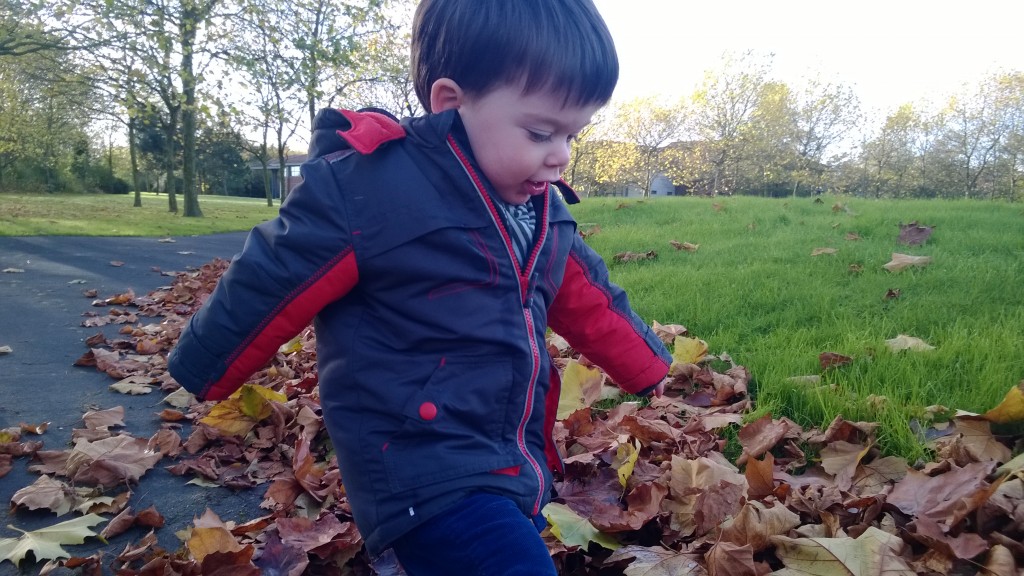 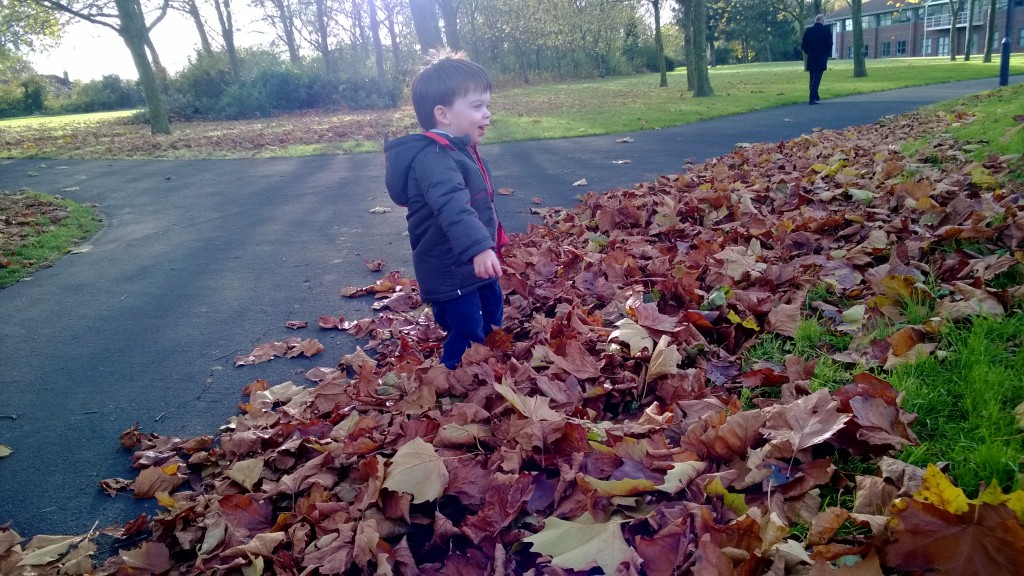 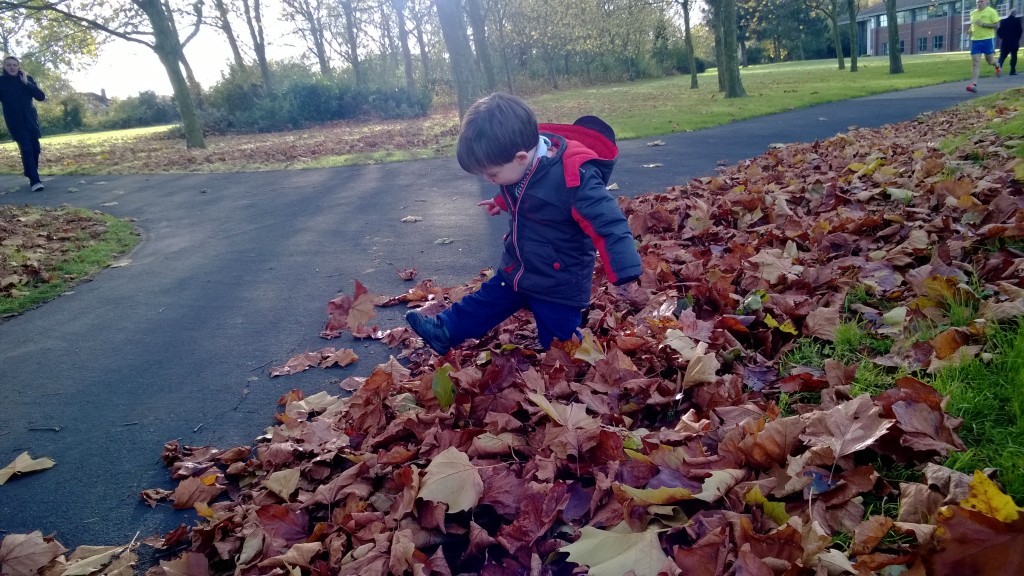 Not much else to say about it is there really! So cute though! In fact I am finding this to be such a cute age. I have pretty much thought that at every age but his personality is really developing now and he is such a funny little monkey. He’s playing so much more independently, babbling away constantly (though still no words) and just chuckles and grins all the time! 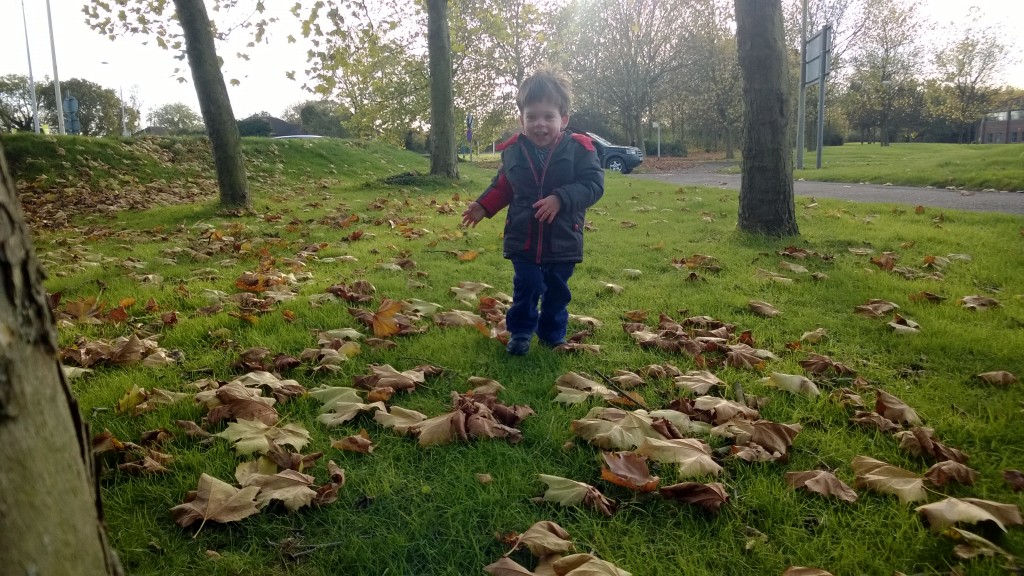 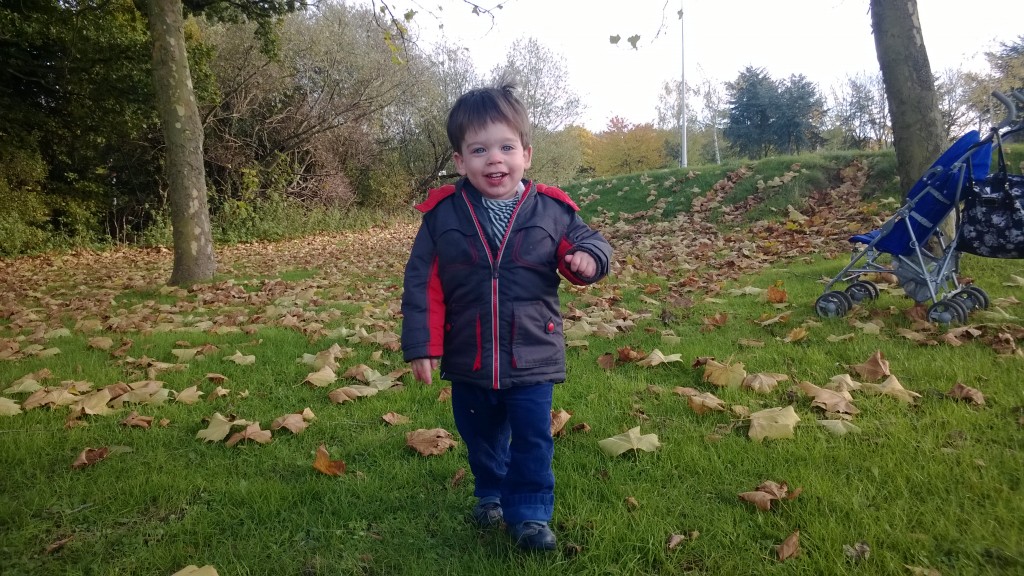 Monkey has been worrying me slightly this week. For a while now we have had an awesome routine, where we are busy all morning and then he naps really well in the afternoon. (And I can get some jobs done, or blog or rest etc.) The amount of time he sleeps can fluctuate quite a bit, but apart from the odd occasion where he only sleeps for 40 mins, he generally sleeps for a good hour and a half at the very least, and most of the time it’s more like 2 and a half hours! Which is amazing. He always sleeps really well overnight too, generally from 7.15 to about 6.30/7am. Sometimes he is still randomly awake (and happy) in his cot at like 8pm, but not often and he usually sorts himself out.

Anyway, it started at the weekend, and on Saturday afternoon he went to bed (seemingly tired) at around 1.45 ish, which is pretty normal, but then didn’t actually go to sleep until nearly 2.40. He was perfectly happy, chattering and giggling so I didn’t worry and he did sleep in the end, it just meant we had to wake him up at 4.30 so it didn’t mess up night time. Anyway then on Sunday, he went for his nap, but DIDN’T SLEEP AT ALL!! Me no likey! He was perfectly happy the whole time, and we kept hoping he would go off to sleep, so he was up there for nearly 2 hours! I guess he was resting at the least but the worrying thing for me was that he was happy the whole time and happy all evening, in other words, he can cope without a daytime nap, WHAT???!!!!

Ok, so I know I am lucky with the routine we have had. It wasn’t always so easy, we did the Ferber progressive wait when he was three months old and it changed our lives, he became a brilliant sleeper. I know it isn’t for everyone and for a long time we didn’t want to try it, but it absolutely worked for us. Anyway, I also know that at some point he isn’t going to need to nap during the day any more and I will have to cope with him being awake all day. But, I have really been hoping that it won’t be for some time yet. I was hoping that in 6 months to a year, when he is happier playing more independently, and using his imagination at playtime, and basically not needing my input or help as much, then I will be able to cope with the no more daytime naps. But 17-18 months seems so early!! I also in the back of my mind thought that no more naps, may coincide with playgroup or something 1 or 2 afternoons a week, but we will see.

All week has been up and down but it has pretty much taken him ages to get to sleep everyday, although Monday and Tuesday he did sleep. Yesterday however, he did it again! No sleep! Just chatting and happy in his cot for about 2 hours. We both got a rest obviously and who knows maybe he did doze a bit, but it’s concerning me a lot. We had had quite an easy day though as his grandparents came round and we were nattering and chatting a lot. So maybe he just wasn’t tired enough?

I took to my good friend Google and searched various forums online and found other mums in the same situation. Some whose children dropped their naps at around this age and never slept in the day again (Yipes!) others where it was just a phase and they carried on putting them down and they just started napping in the day again. (Please please please)

I have decided I am not going to let him drop his naps without a fight, this may seem selfish, but seriously how can he go from a 2 1/2 hour sleep to 0?? No way. So today I have been on a mission to tire him out! We have been out at the shops without the buggy. Interesting and I got laughed at by a passer by when I was trying out a ‘look, don’t touch’ method, but otherwise it was fine and we had fun.

Then after lunch we went for a walk to a local play park. Normally we go in the buggy and it takes about 10 mins to get there. At Monkey speed it took us 40 minutes! Was fun though, and we had a short play at the park then I wanted to come home before he got too tired. I failed in this though as his poor little legs were far too tired for the journey home! I don’t blame him because my legs are tired too! I managed to get him to walk about half way but then had to carry him the rest, and boy is he heavy now!! We came in and started to play a little but he was getting very easily frustrated, which is a clear sign of tiredness with him.

So up he went to bed and after just a couple of minutes chattering he is fast asleep! Phew! So clearly I need to tire him out more to keep this nap, we shall see how it goes. When did your little ones drop daytime naps? How did you cope?