This last week has been a bit bonkers really. Some lovely highs but some bonkers moments too.

Friday was lovely, a nice day topped off by a visit from my little bro. The kids adored playing with him for the afternoon and then his lovely girlfriend came so we had tea and a good and natter Friday night, which was really nice . 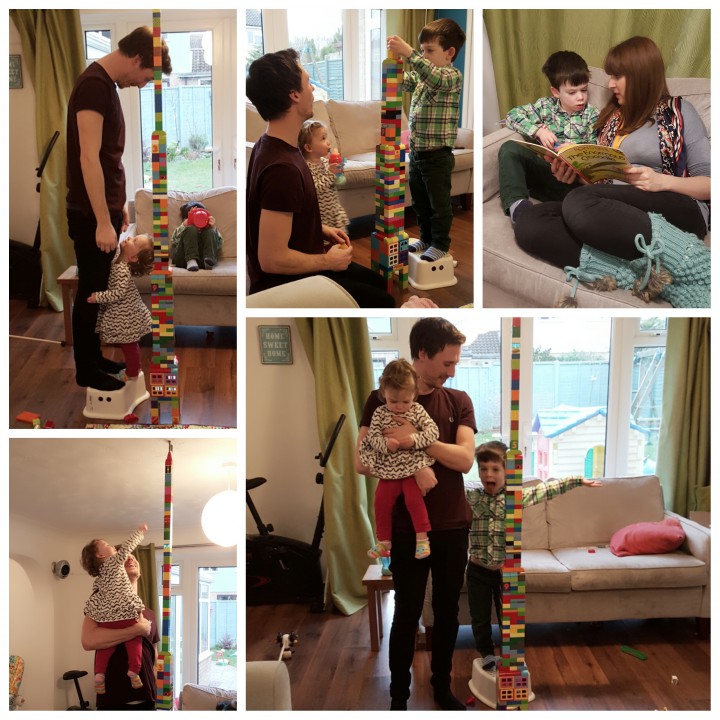 Then I was planning on heading down to London for one of my bestie’s birthdays at the weekend. I’ve let my London friends down a few times since having kids and I was determined nothing was going to stop me going as I did not want to let her down, again. Hubs had a rotten cold but though still coughing a lot he was feeling better in himself. LM was really poorly though with a horrible high temperature and she wasn’t herself. Still I knew in my heart it was just a virus and I knew that hubs could cope so I put worrying Mummy thoughts aside, got my determined head on and drove down to London.

I had a wonderful night with 2 very very lovely ladies and it was so fun to really relax knowing I was staying at my friend’s house (rather than rushing to get the last train home) and we had lots of giggles. We ended up in Gordon’s which is London’s oldest wine bar and it was so cool sitting in the old tunnels. 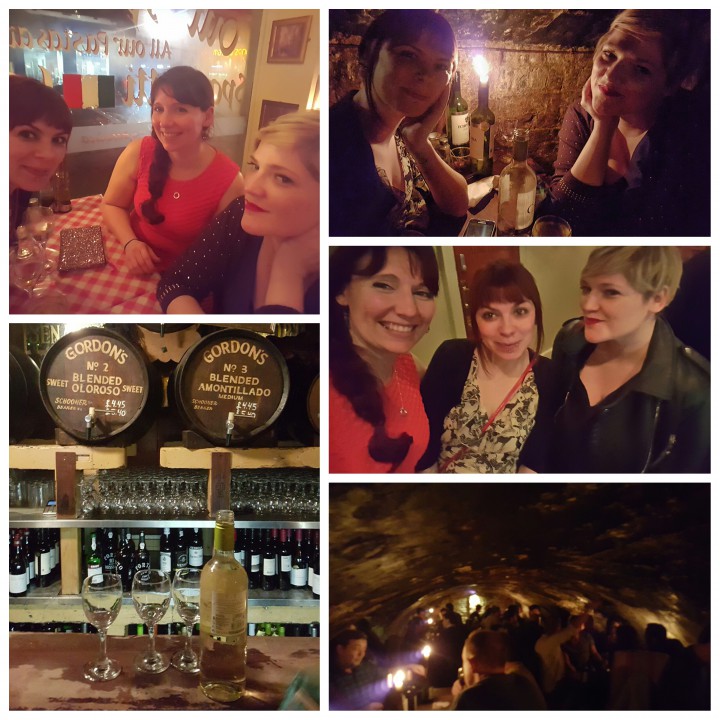 Meanwhile back home, things weren’t going so well. LM was really really poorly and unhappy which definitely made hard work for hubs. Then to top it all off she did a poo in the bath! Never a fun thing to deal with and even worse when you are on your own. Apparently Monkey was an absolute star for daddy thankfully. It was an early night for our poorly girl and that was the last I heard that night.

The next morning I got the first sleep in (till 7.45) that I have had in years, then checked in with hubs. I apparently text at a bad moment as I got a short reply telling me to come home ASAP. Oh God. But a phone call later and it was just a bad moment and he was doing fine. Told me not to rush, so knowing my friend was asleep I made the most of being able to lie in bed and doze for a bit (bliss!). 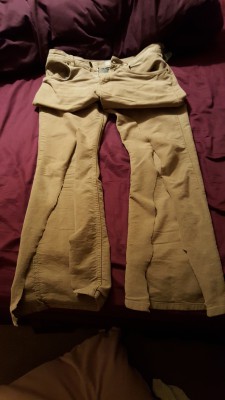 Hubs’ trousers after being cut open by the paramedics

The came another phone call from a very odd sounding hubs. Saying he was sat at the table but his knee had locked and he couldn’t move it at all. Not to worry though his parents were coming to help and hopefully his muscles would relax soon. Nevertheless I decided time to get ready and head home. Over the course of the next couple of hours with his situation not improving I got regular updates that he had called 111 and they sent a non emergency ambulance and well, turned out his knee was partially dislocated! Hence not being able to move it. So his trousers had to be cut off, and with a bit of gas and air his knee was popped back in.

He was told to go to the walk in centre for an x-ray and did as he was told (by which time I was home) only for the nurse there to basically disregard everything the paramedics had said, refuse to x-ray him and sent him home saying speak to your gp. Wonderful waste of a couple of hours that was!

Meanwhile back at home LM had a very long sleep and my brother and sister in law popped over. Monkey and Uncle Paul had tonnes of fun playing star wars lego together. 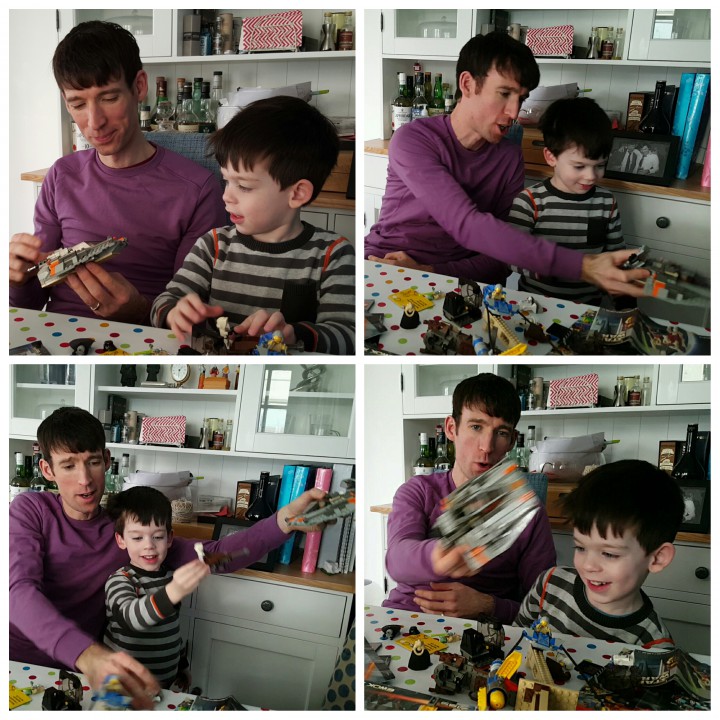 Hubs has now spoken to his Dr and they think he may have torn the cartilage in his knee so may need surgery. He has an MRI scan booked and is waiting for appointments with the Musculoskeletal team to jump through hoops while they figure out what is wrong. We spent a couple of very worried days not knowing whether he should sit, stand, walk, drive etc. amid concerns it would dislocate again so he was getting lifts everywhere and being very careful. Yesterday he had an emergency appointment at the private physio he sees for his back and they were so so helpful and put our minds at rest. They also suspect a cartilage tear but have said he doesn’t need to be especially careful in terms of movements etc. Phew!

After dropping him at his physio the kids and I explored a nearby play park which was fun but late in the afternoon for them and nearing tea time so it did get a bit stressful towards the end! Glad to know hubs can drive himself around again rather than needing lifts everywhere with kids in tow. 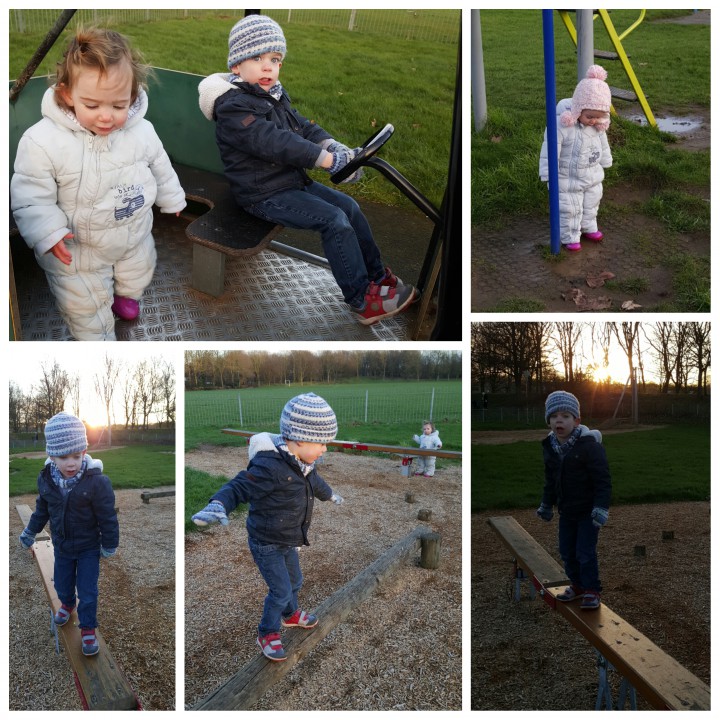 So it really has been a topsy turvy week. It was always going to be as there was bound to be jobs to catch up on after I’ve had a weekend away but it has been even weirder with all the to-ing and fro-ing about hubs’ knee.

I’ve felt really guilty about the fact I wasn’t at home when it happened and that has been really hard. Topped off by Monkey making some delightful comments including “you’re not as good at that as Daddy, be better like Daddy. ” I know not to take any notice but it was the cherry on the cake and was feeling really low and rubbish anyway. But you can’t please everyone all the time. I wanted to be there for my friend for a change and there’s no way anyone could have predicted this would have happened while I was away. So now I have caught up on my sleep I am feeling a bit more rational about it. Oh the joy of Mummy guilt eh?

We also had a lovely pancake day and it may be the consumption of tonnes of pancakes that led to me feeling more cheerful haha. Monkey was a great help with making both american pancakes and the traditional ones, bless him. 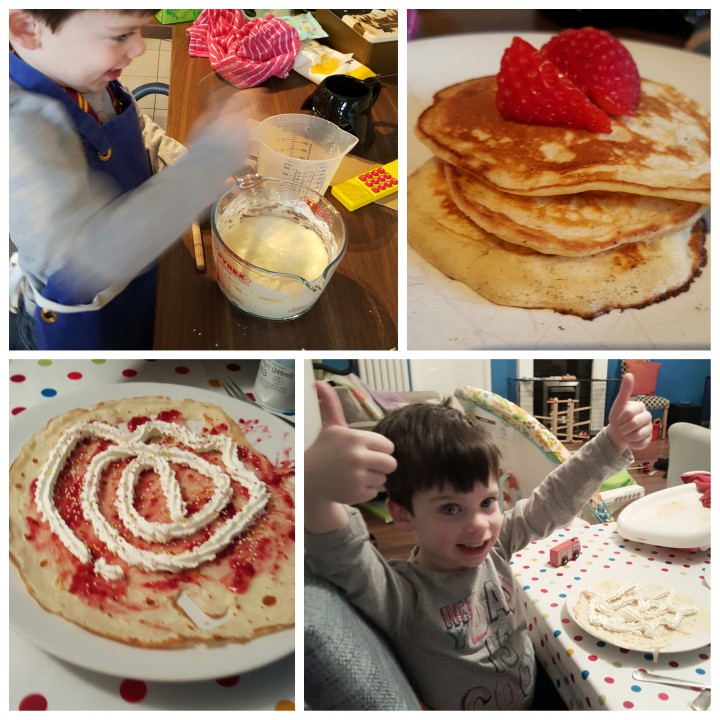 I’m also dead proud of myself, as one of the jobs that didn’t get done at the weekend was replacing the light switch in the kitchen (it broke Friday night when the actual switch fell off annoyingly) so I decided to give it a go myself. I’ve never done anything electrical before but made sure I turned it off at the mains and thought it shouldn’t be too hard to replicate what was done on the existing switch. Anyway, I did it. I didn’t electrocute myself and the switch works so hooray for that!

Things seem to be settling back to normal now which is nice, and just in time for half term craziness haha. How has your week been?