My work of the week this week is “progress” as we are making some great progress, on a number of fronts.

I wrote last week that we are starting our new big project, and honestly the builders have worked so hard and only 1 week later, the progress is incredible! They’ve obviously got a way to go yet but the work is well underway! 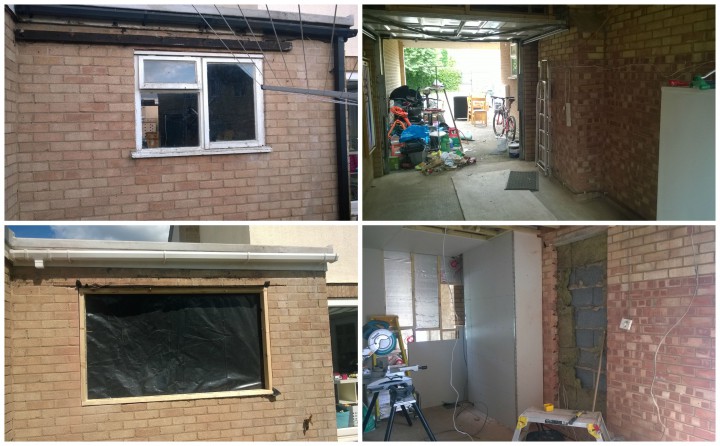 The old garage is feeling much more like a room, now the stud work is up, it is insulated and has the plasterboard up. The new, larger window has been created and the old garage doors (front and back) are well and truly gone. The foundations have been dug for the new wall on the garage and what will be our utility room, and today these were filled with concrete.

It’s very exciting though my word could also have been chaos as of course it has been noisy and hectic and a bit chaotic having the builders in – and they will be around for a while yet!

We’ve also made some progress getting rid of some of the old stuff from the garage and have sold a few things on ebay, which is brilliant. No point stuff we don’t use going back into the new garage! We’ve given away lots of baby clothes and other bits including a moses basket and nursing chair to friends. We know we aren’t having any more babies but it is lovely to see our bits go to a good home,

We are also making progress in a totally different area, potty training Monkey! I haven’t mentioned it but we also started potty training last week and Monkey has been doing amazingly. We’ve had less than 10 accidents all week and he is getting better and better at telling me he needs to do a wee (rather than just going when I take him). He goes a couple of hours between wees and has even had a few dry nights which we are hugely impressed with! I will write more about how it’s gone in a later post but I am so glad we waited until he was ready.

We tried earlier this year and he wasn’t ready, but now he is and he has just got it straight away. I know we all feel the pressure to do it early and having a 3 year old in nappies certainly what I thought would happen but waiting until he was really ready and following his lead has been absolutely the right thing for us. It has actually been really easy, which is a huge relief, and it is lovely seeing him in pants rather than nappies!! 🙂

In many ways it has been a tough, and certainly busy, week with the builders, LM and I have a cold and Monkey is a bit ratty and not 100% either. But it is good to feel like we have made some great progress and are really getting somewhere!

We moved into our house about 3 weeks before Monkey was born. It is in the area both Hubs and I grew up in, an area that we love. We got it at a really great price because it needed work doing to it, more work than we initially realised to be honest! We moved in to a garage that was basically flooded from an old roof, a kitchen that was falling apart, rotton soffets with birds nesting in the eaves, pretty nasty bathrooms and both front & back gardens were a mess. Initially we thought we could live with a lot of it but gradually we realised we needed to do some work sooner rather than later.

So when Monkey was still a baby we did many of the repairs needed, had a new kitchen fitted, a new bathroom, and created a shower room out of the existing downstairs toilet and hall cupboard. We completely gutted and landscaped the back garden and made some “smaller” changes to the front, including a new gravel driveway area.

The ‘small’ changes to the front garden! 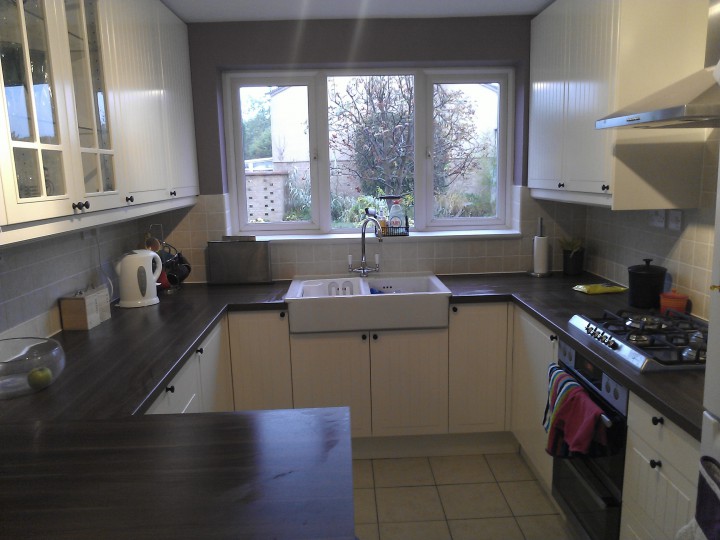 Our itchen when it was brand spanking new!

There have been smaller changes over the last 3 years, lots of decorating and replacing ceilings but one of the things we loved about this house was it’s potential to grow with us. Since early this year Hubs has had a bee in his bonnet that he has wanted to start this process. He felt, quite rightly, that if we want to extend in any way then we should do it now when the space is really useful to us. If we wait until we can more easily afford it then the kids will be older and it won’t be as useful to us as it is now.

So, it has taken months of decisions and back and forth and organising architects drawings and building regulations (thankfully we don’t need planning permission) and now it is finally happening. We are converting our existing Garage into a Study/Playroom, and the carport will become our garage. We are also moving our existing front door, gaining a utility room and potentially re-doing our driveway. Eek!!

We thought originally we had a month or so before work started but all of a sudden the builder is available and bam it starts this week! So we came back from holiday a little earlier than we would have, and have had some work to do ourselves. Thankfully we cleared out the garage a few weeks ago but we hadn’t got round to selling some of the stuff we want to sell :S. So all of that stuff, plus other garage bits are now filling our conservatory!

Plus because we are moving the front door, we have some bushes and plants to move around too so we have had some old horrible plants dug up and then we have been moving the plants we like into the spaces they left behind.

We have also been working out how we want our new room to look so have already ordered most of our furniture, some before we went away and some while we were away! All very exciting but always nerve wracking! Fingers crossed it all looks the way we imagine… I will share more details with our choices in another post.

I am nervous, excited, apprehensive and everything in between. Wish us luck with the chaos and noise and fun having the builders in for the next 8 weeks or so (!!!??!!!) will undoubtedly bring!!

So bye bye garage, car port and front porch, with the annoying front step and garage doors that barely close let alone lock. Spiders it is time to find a new home! 🙂

My word of the week this week, is project!