Monkey and Daddy have had colds all week, though Daddy has had it the worst. Monkey has been a bit snotty, the occasional cough but mainly alright. He had calpol at bedtime Wednesday and Thursday but Friday he had seemed fine so he didn’t have any. At one point in the evening I heard him cough, and I thought it sounded a bit funny, and the thought ‘croup’ did cross my mind… but he only coughed once, had a brief whimper then went back to sleep.

Daddy and I went to bed not long after 10, had a bit of a read then lay down to sleep. Within minutes of turning our lights off we heard some odd noises from Monkey’s room. A sort of cough but we could tell he was distressed. Monkey is usually great at self soothing after a few minutes unless he is really poorly, but last night, there was something different about the noises he was making. We headed in but still didn’t think too much of it at first, Daddy gave him a cuddle while I started to get some calpol ready for when he had calmed down.

It was at this point we realised that something really wasn’t right. That his breathing wasn’t right. He was coughing like a bark but didn’t seem able to take a breath in. He was sort of swallowing air instead and then doing these horrible burps and retches in between coughs, but it was all really irregular. Hubby later likened it to drowning, as he couldn’t get air in, or cough the fluid out. It was terrifying. He couldn’t even cry and he looked really scared. Eventually he coughed up a huge bit of phlegm and managed to get a breath in, although his breathing was still very irregular and laboured and his lips were turning blue. By now the panic was creeping in and we didn’t know what to do for our precious boy. We were so scared for him.

I suggested calling the ambulance and hubby agreed. Neither of us have ever called 999 before in our lives, and we can count on one hand the number of times Monkey has needed to see a Dr so we were very much in unchartered territory.We’ve called the NHS helplines before, when I had a hideous ear infection, and when I was delirious with a fever the first time I had mastitis. We also called once when monkey was doing horrible grey poos. But this just shows how worried we were, breathing is one thing that you just don’t mess around with and we knew that 999 was our only option. The operator was very helpful and tried her best to keep me calm and together we monitored his breathing while we waited for the emergency response vehicle. Thankfully by this point his colour was returning and though still laboured and irregular his breathing had improved and he was calming down a lot.

A very friendly paramedic arrived and she was so lovely. Our little shy boy got a bit scared by this new presence in his bedroom and he got very upset when she stuck a sensor on his toe to monitor his pulse and heart rate. His pulse ox was low (not enough oxygen was in his blood, how they can measure that by sticking something on your toe I have no idea!) so she started him on a salbutamol nebuliser. Thankfully the mask didn’t have to be over his face, just aimed in his general direction, but he still was not keen on it. We sang and read to him and cuddled him lots to keep him calm but he was obviously really tired and scared by everything that was happening and so very upset! Because of his pulse ox and the croup-like cough the paramedic called for an ambulance to take him to the hospital.

The nebuliser helped and his breathing became less laboured. The ambulance men arrived and we headed off to the hospital. They took his temperature with a fancy laser shone on his forehead, incredible! The paramedic in the ambulance was amazing. Steve, if you are out there, we love you. At the start of the journey Monkey was lying on mummy basically whimpering but by the time we got to the hospital he was sat up and babbling away. Steve turned a bedpan into a a funny hat, found some crayons and a little ambulance man bookmark. He was so good with Monkey and seeing our little man return to himself again was such a relief. 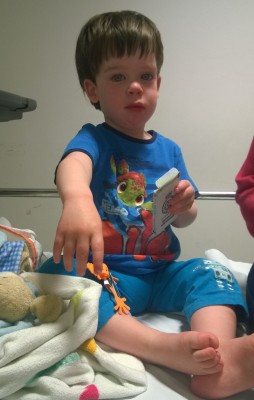 Shortly after arriving at A&E

We were taken to the minor injuries unit at A&E (phew) and again the nurses and doctors were fantastic and really good at putting Monkey at ease. There was a really funny moment when the Dr was trying to get a glimpse at Monkey’s throat. The three of us adults had our mouths open and tongues out while encouraging monkey to say aah. He was looking at us like we had gone nuts and occasionally did it, but never for long enough, or facing the right direction for the Dr to get a glimpse. He was so lovely and patient though and eventually he got a split second glimpse, which was enough.

They confirmed he has croup, a viral infection of the throat and said  the risk was that his throat could swell shut. They gave him a dose of steroids to prevent this happening and we had to stay there for half an hour for observation. Monkey took his medicine like an angel and the nurse was impressed by how well he swallowed it, and the yum yum he announced afterwards!

By now, Monkey was back to being our little boy, he was playing with his crayons and then brumming some cars around the room. He charmed everyone he came into contact with and was just such a brave little man. 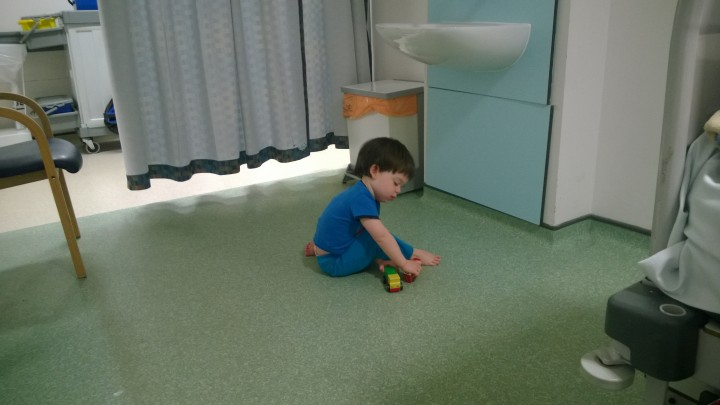 Over an hour went by and hubby and I were astounded by his energy as it was now gone 1 in the morning! The Dr eventually came back and said we were ok to go home, and told us that the steroids would make him a bit hyper for a while (that explained it) and that he may not want to go to sleep straight away. We headed out to call for a taxi and had a little game of peekaboo while we were waiting! 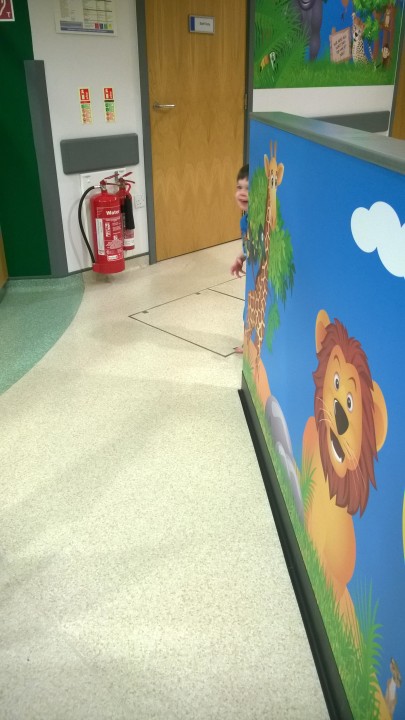 We headed home in the taxi and as as the taxi driver asked if we were ready to go, Monkey said very happily ‘go!’  and made the taxi driver laugh. It was a rough night for hubby and I. We were awake at about 4.30 after a cough to check he was breathing, and a couple more times after that. We’ve both been shattered today but life goes on and our families have been great and very helpful and supportive.

It has been an exhausting and emotional 24 hours, but my Magic Moment was when Monkey became our little boy again. When he came back to himself and was playing and having fun like nothing had ever happened. Running around barefoot in his mismatched pjs with a huge smile on his face. He took so much of it in his stride and proved to be far more resilient than mummy and daddy! It was a wonderful experience of the NHS too as every single person we came into contact with was incredibly helpful, friendly and caring towards us and I wouldn’t fault the care in any way. 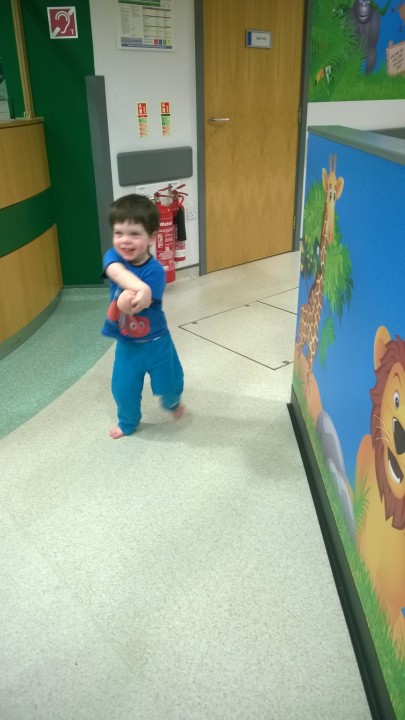