I realised a few days ago that I haven’t had to come up with many new play ideas recently – and the reason is this: Monkey decides what we play with most of the time these days. He is growing up in front of my eyes and has a mind of his own. I don’t want to stifle that so most of the time our playtime is very much Monkey-led. We are still out and about and busy a lot so when we do have playtime at home, it is very much up to him what we do.

We have different things in different areas, all of his brio wooden train stuff is in a red box under a chair, which he can pull out. (He can’t actually build a track yet but he loves playing with his trains on the track) We also have an area behind the sofa with a lot of toys, and they are divided up so he can get his duplo, or his cars etc. He is just learning to put his duplo bricks together now, and he loves cars. There’s a drawer in this area with his puzzles in and another little cupboard with musical toys. I have to say I find having the different areas is such a help when it comes to tidying up at the end of the day! A good way of keeping all the little bits of toys together! I got the idea from a friend who had something similar at their house and it makes life so much better, we are lucky we have the space for it I know. What storage solutions do you have for toys?

Then we have the conservatory where there are crayons and chalk for drawing, and then in a corner of the dining room is his kitchen, we recently got the smallest, cheapest tea set we could find and he is loving learning to pour the tea and stir the tea :).

So it is pretty much up to him. Obviously he is still little, so sometimes I lead him in one direction or other and help him out. The funniest things and the things that keep him the most entertained, are the random toys, which aren’t really toys. When we were clearing out some junk the other day, we randomly found a pack of jumbo playing cards. I think these must have been Hubby’s as I had never seen them before, but he doesn’t remember them either! Anyway they have become one of Monkey’s random fave toys. His favourite game is the 52 card drop haha!

He also, absolutely LOVES putting the cards back into the box for them. I think they call this fine motor skills or something, but whatever, I love it as it shows how good his coordination is getting these days! He can do this for ages (well, ages in toddler-time anyway, we aren’t exactly talking hours :)). I’m also using them to talk about numbers and shapes. He may not understand this much yet but I don’t think it hurts to start early. 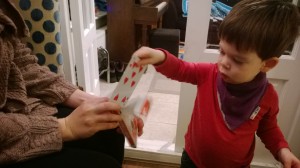 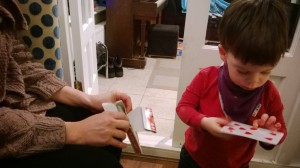 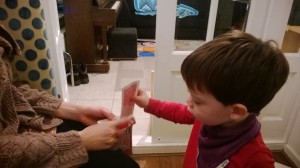 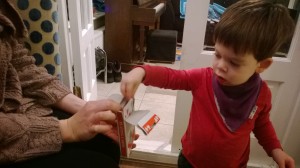 The other day monkey managed to find a new box of crayons that I was keeping for him, but I didn’t mind because actually he spent ages with his granddad putting them back in the box neatly, taking them out, and repeating. Kept him entertained for ages which is always brilliant 🙂 They are quite good crayons too actually as you don’t have to put a lot of pressure on them to use them. I thought they may be a bit old for him but actually they seem perfect for him at the moment. 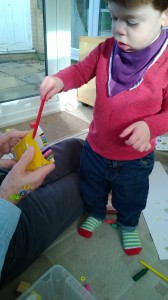 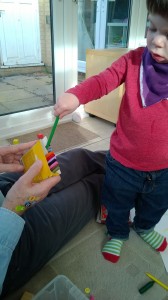 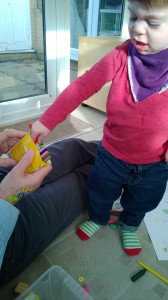 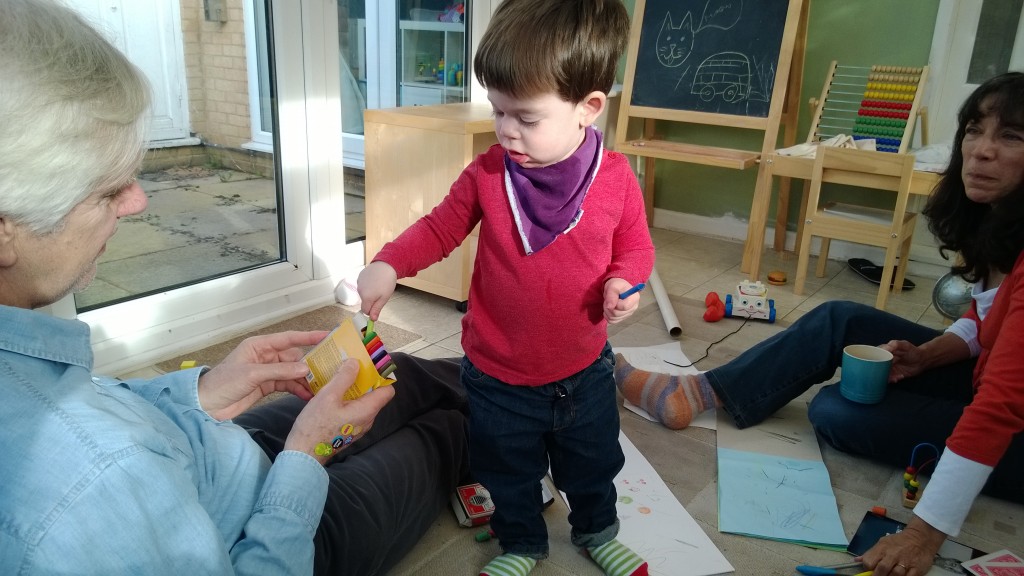 He got into my wool bag the a few days ago too, and although my immediate reaction was ‘noooo!’ I soon relaxed as he found a ball that was already a big jumbled tangled mess, so actually I didn’t mind him playing with that too much. As it was he had great fun pulling it apart and playing with it, very cute 🙂 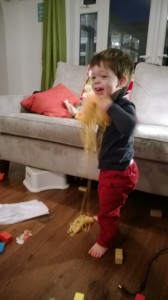 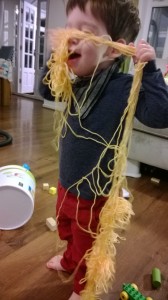 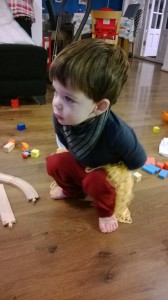 There are a few playtime things I want to try out with Monkey, but for the most part he is so happy with choosing what he wants to do that it’s nice to encourage his independence and ideas of his own!