Monkey is a fussy eater. He wasn’t until he was about  13 months old then almost overnight everything changed. I’ve talked at length about it before and we have ups and downs with how fussy he is. We have been going through a very fussy patch lately. As he has been so poorly over the recent weeks he really hasn’t had as much of an appetite so we have been happy when he has eaten anything really. I am planning a seperate post about this but it is so difficult to be strict with them when they are poorly, especially with food as he needed to keep his strength up and things can taste really funny when you are poorly.

I’ve been watching “Junk Food Children who’s to blame?” on TV too recently, and well I think it is pretty obvious the documentary makers are laying the blame squarely on the parents. I think they are probably right, as they are the ones who buy the food for their children, but I can also see how it is a slippery slope and none of these parents do it with intentions of harming their children. Far from it, they are probably too soft on them and that isn’t always good for them.

Anyway it has made me think a lot about Monkey. He has a pretty good diet anyway, hardly ever has crisps, chocolate etc, BUT we could do better. He doesn’t really eat any fresh fruits (we get him eating dried, cooked, frozen pureed but no joy with fresh really) and we struggle with lots of vegetables too, and most things actually. Pasta, sausages, chicken, pretty much everything depends on his mood. Most dinner times are spent with Mummy and Daddy pretending to be the voice of a toy (postman pat, a bus, an owl, any toy really) as he is much more likely to eat something when a toy suggests it! Not ideal but we go with what works.

One great way to get kids interested in food is to get them to help with preparing and cooking food. Monkey does love cooking but after catching himself with the peeler a few months ago he has been more reluctant to get in the kitchen. He has expressed more of an interest though lately, and with poorliness and chicken pox meaning we have spent a lot of time at home, rather than out and about, I have grabbed the opportunity to get him back in the kitchen. We do a lot of baking, which is great, but there is no reason cooking can’t be fun too.

We love Annabel Karmel’s recipes, her veggie burgers are a firm fave and we make them regularly in big batches so there is always some in the freezer. Another regular is her hidden veggie pizza sauce, which again we make in big batches and freeze. I know not everyone is into hidden veggies and I would prefer Monkey ate vegetables without having to hide them, but while we work on that I don’t think there is anything wrong with getting them into him any way that we can. We tend to double this and make a big batch (because so many of the ingredients are halved etc.) which gives enough sauce for 20 pizzas, so this would do about 10 pizzas.

Monkey helped me prepare the veggies, washing them and grating which is good as at least he knows there are veggies. He even announces that he loves leeks and courgettes – without tasting them. I love his enthusiasm though even if I don’t believe him for a second!

Heat the oil in a saucepan, add the onion, leek, carrot and courgette and saute for 8-10 mins until soft but not coloured. Add the garlic for one minute than remove from the heat. We have hard anodised pans and a hand blender so I add the remaining ingredients in the pan and blend in there, but if you have non stick pans, or if you prefer, you should move the veg to a blender or bowl at this point.

Add the remaining ingredients and blend until smooth.  Return to the pan and simmer for 20-25 minutes. Allow to cool and then it can be frozen in batches. I usually spoon off a couple of ladles full into a tupperware which can then be got out to use with 2 pizza bases as and when. I would love to make our own pizza bases, but don’t have the time or energy at the mo – hopefully we will one day though!

The pizza sauce is great, but with the small amount of veg in there I doubt it would count as one of your 5 a day, and we really want to work on getting other veg into Monkey. Homemade pizzas are a great way of doing that, as cheese can help mask the veg, and you obviously get control of the ingredients. We use a half fat cheese, because it happens to be our fave and does help with our diets.

This is the fun bit that kids can really get involved with. We bought Monkey a child safe knife – which has a rounded tip and a fairly blunt serrated edge. It still cuts veg so you still have to be very careful around it, but the thought of Monkey cutting with it terrifies me a heck of a lot less than helping him use our big scary kitchen knives would! It means he can join in with the chopping safely and without giving me heart failure. (Yes he is wearing his PJs in these pics, I indulged him with a PJ day when he was poorly :)) So he helped me chop up the mushrooms and yellow pepper and had great fun doing it. The amounts and size of the bits I guess depends on your kid and their fussiness level. We are going for not too much, and fairly small at the moment as if they are big he will either eat round them or refuse to eat them at all. Even some of these size bits have been a challenge to get him to eat! Monkey is seriously stubborn and often goes to bed without eating any tea when he doesn’t like what is on offer (or at least he has decided he doesn’t like it even when we know it is something he does actually like!).

So anyway, yes our chunks are quite small. We also use some flavoured turkey meat for the most part, though do use other meats too sometimes to shake things up a little :). Monkey helped spread the sauce onto the pizza bases and then sprinkle the meat, veg and of course cheese on top. Yummy pizzas made :). Now I won’t say it was plain sailing. We make variations of this quite often and it depends on his mood and like I say at the moment he really is quite fussy. He did eat some though and moaned more about the chunks of meat than the veg and with him it really is all about seeing something he doesn’t like. If a mushroom or pepper is hidden under cheese he eats it no problem. If he can see them he doesn’t want it. So it is a work in progress but for my part, I thought they were blimming lovely and it is a good way to get him involved with cooking and vegetables so got to look at the positives! 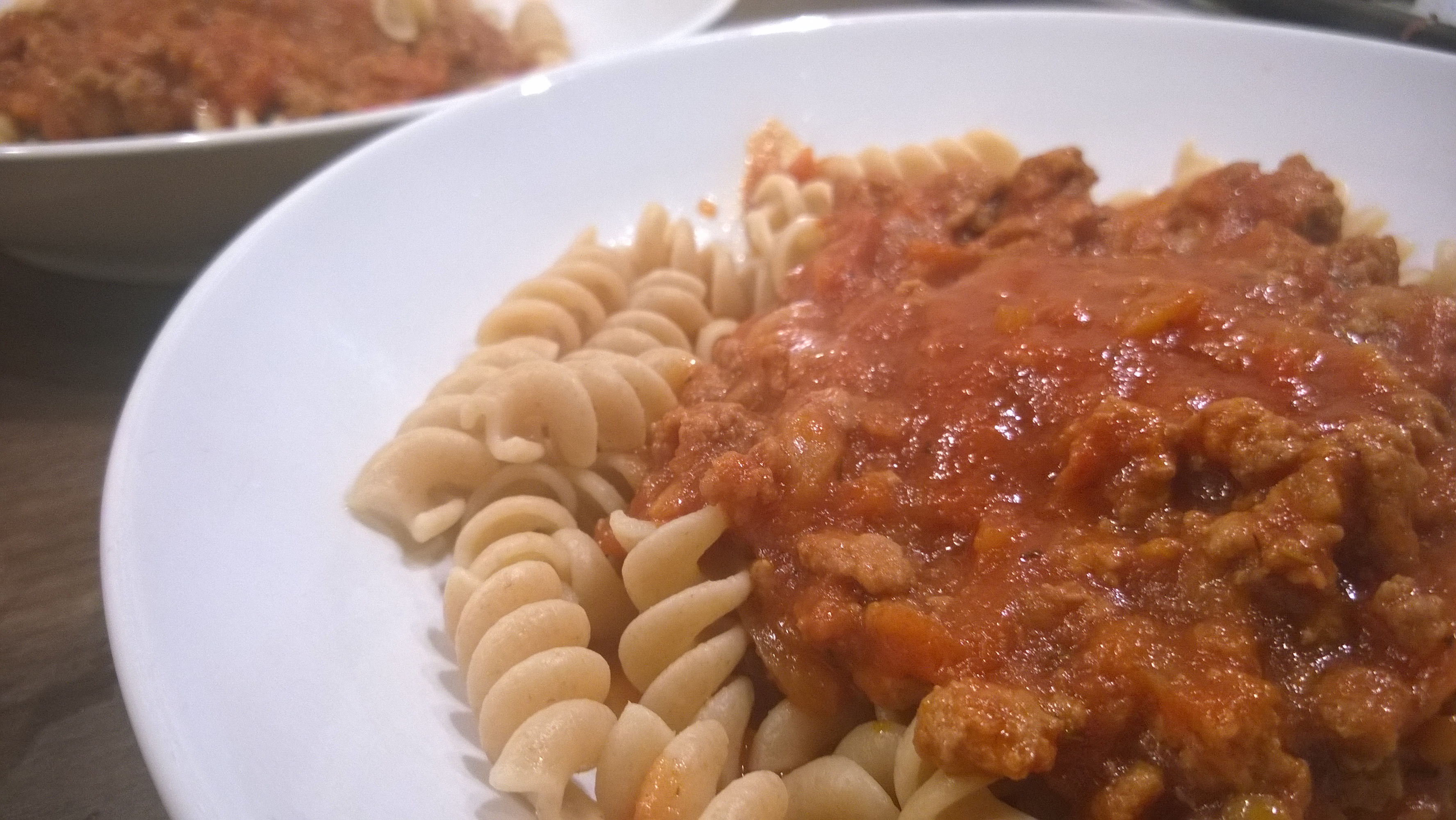 This is one of our favourite family meals, as it is delicious and so simple. It started at life as one of Annabel Karmel’s recipes (as regular readers will know, I love her) which we have adapted to make enough for the whole family, and we use Turkey whereas she uses chicken in her version. It’s great to get a bit of hidden veggie goodness into picky eaters too To Serve
Pasta. We use wholewheat as it goes nicely but normal pasta is lovely too. We tend to use weight watchers portion sizes so have about 50g of dried pasta per person, it’s not a lot though so make as much as you would normally use for your family. There is plenty of mince in the recipe, we tend to get 4 adult portions plus two kiddy portions from the bolognese, and they’re quite generous.

Method
1 – Heat the oil in a fairly large saucepan and gently fry the onion and carrot over a low-medium heat, stirring often, for 3 minutes or until soft.

2 – Add the garlic and fry for another 30 seconds

3 – Add the turkey and fry, stirring frequently until cooked. Boil and reduce the sauce

4 – Add the thyme, passata and apple juice, bring to the boil.

6. Bring to the boil, reduce slightly but then leave to boil and reduce for 15 minutes (stirring occasionally).

7. Meanwhile cook the pasta according to packet instructions.

Serve/ You can either mix the sauce and pasta together, or serve separate, whatever your preference.

Including the prep time I find it takes 40-45 mins to make but a big chunk of that time is just on the hob.

So simple and tasty, and being Turkey it is a really healthy, low calorie meal too, packed full of flavour. Why not give it a go?