It is different for everyone but for me the first few months with a baby are the hardest. We felt it with Monkey and it has been the same with LM, the first weeks seem to last forever, and yet looking back it feels like the blink of an eye.

Because here we are, we made it, our Little Miss is 3 months old, 11lb 10oz and life is definitely getting easier, albeit gradually! 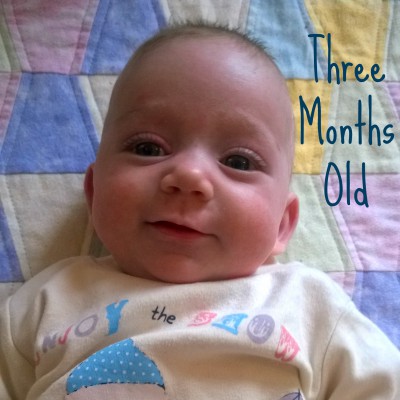 So what is she up to at the moment?

It might seem weird to have these under the same heading but lets face it they are very much linked! It’s over a month since we moved from breastfeeding onto a Lactose Free formula and it has definitely been a much easier month feeds wise. The colic has gone completely and the reflux has been under control with Gaviscon.

The only problem we have had is that the combination of Gaviscon with the lactose free formula has made LM quite constipated at times. We started giving her additional cool boiled water but that didn’t help much so we started giving her sugar water a couple of times a day (mixing a teeny bit of sugar into the boiled water) as I read that it was a traditional remedy and worth trying. It helped loads and for a while she was much less uncomfortable.

Then our HV actually advised that it wasn’t an ideal solution as it can make their kidneys work harder, so we went back to just water. She really didn’t want to drink much and pretty soon was struggling again. We tried the sugar water again but the cheeky minx decided she wasn’t keen on it anymore. She then got really badly constipated and it was horrible seeing her in pain as it took her a long time to do her business. Because the root of the problem was the Gaviscon we decided it would be worth phasing it out, to see how she got on and how bad her reflux is now, as she has been having the Gaviscon at every feed for the last 2 months.

The good news is that she is fine without the Gaviscon. I think there are the odd times at feeds where her reflux bothers her as she has been a little fussier sometimes since we stopped it… But it is not at every feed and there have been no nighttime screaming sessions so she is doing well. The result is much better movements too which is a huge relief! 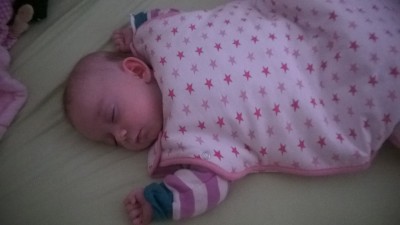 I wrote previously about how we were helping LM learn to sleep better by herself and she is doing amazingly well. She had a few days of sleeping 10-11 hours through the night, though she has decided that she doesn’t want to do that anymore 🙁 It was amazing for those few days and we know she can do it! Daytimes are still all over the place, when I started writing this I thought we may have a vague routine, but she has thrown that out of the window again now so re-writing! She has actually decided she wants to be awake for about 31/2 hours at a time now, which is fine by me as long as she is happy.

And she is. The result of the good sleep and being in less pain from colic and reflux is that she is a gorgeously happy girl now. She smiles and coos all the time and is just a joy to be around. A complete contrast to the screaming of the early days poor thing! Yes she still cry’s and fusses and late afternoons can be fun, but it is all so much easier than before. I hate the lack of routine though and am praying that some kind of pattern forms if she is going to be awake a bit longer now. I know, she’s just a baby but I feel so out of control and like a hermit because I struggle to arrange to see anyone because I don’t know what she will be doing and staying home is just less stressful.

Ok so there’s not much playtime going on with a 3 month old but it is starting. She adores the monkey and lion faces on her bouncer and sits giggling, grinning and cooing at them for ages which is just lovely! She also bats at the dangly toys and is really enjoying the ones attached to her car seat. I was really impressed that she grabbed onto one of them the other day and held onto it for ages! Monkey was totally uninterested in any toys like this until he was quite a bit older!! 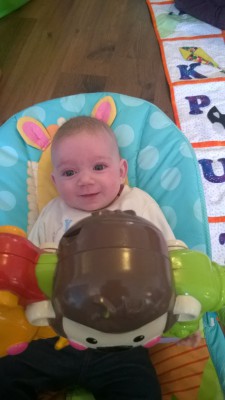 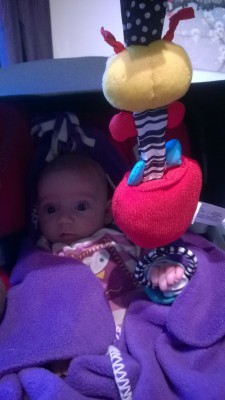 While she loves lying on her back and kicking her legs, she still doesn’t very much enjoy tummy time. That being said though she is so strong and easily pushes herself up to have a look around and has lifted her legs like she is trying to roll so I am sure in time she will get there! 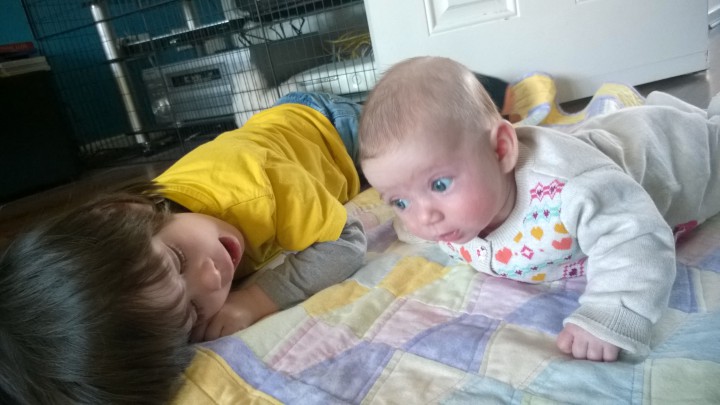 Her favourite thing is sitting up, she just loves looking around. She sits on my lap and if I lay her on my knees she is always lifting her head and trying to pull forward. We sit and sing “If you’re happy and you know it” and “heads, shoulders, knees and toes” and ‘row row row” is great for strengthening her “sit up” muscles! Because she loves sitting up so much we have just got out Monkey’s Jumperoo and she sat in it today for the first time. She can’t bounce yet and I have a cushion under her to support her but she definitely likes being in there! 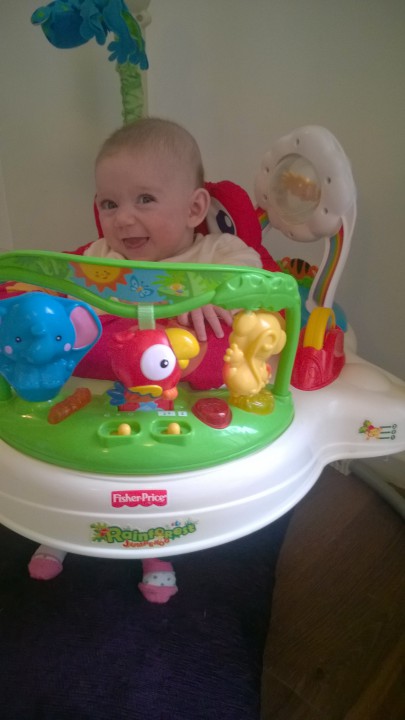 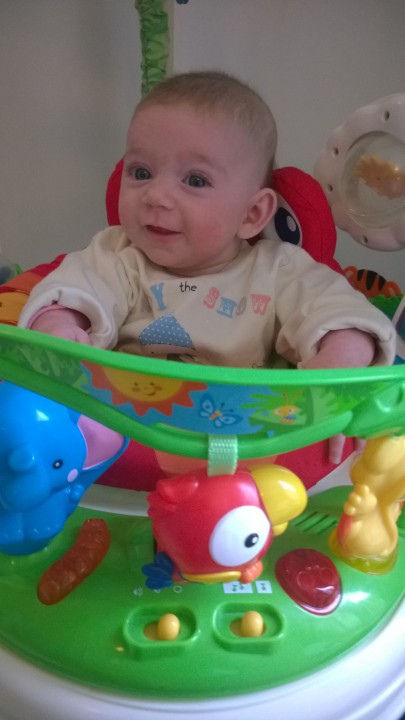 She is fascinated by mirrors and stares at herself in it, mesmerised! When she saw Daddy in the mirror the other day she could not stop smiling, though she wasn’t interested in seeing the real Daddy, standing right next to her! I think she is a bit of a Daddy’s girl already as she always has smiles for Daddy, even when she is tired!