Monkey is loving school at the moment. Loving it. Some days he is tired and doesn’t want to go and there have been comments along the lines of “do I go to school every day?” as realisation sets in that this is every day now. I can’t always get much out of him in terms of what he has done that day but what is apparent is how much he is enjoying learning to read and write. 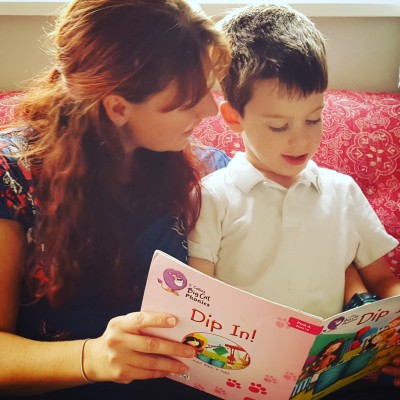 He adores singing all the letters and sounds songs and often pipes up if he hears a relevant word or sound, singing one of the songs and doing the actions he has learnt at school, “under the umbrella, u, u, u” or “munch on your meal, m, m, m” for example.

He constantly wants to write things, letters, lists, notes etc. He asks us how to spell the word and occasionally we have to draw a letter for him to copy but he knows almost all now I would say. Here’s a couple of his examples. 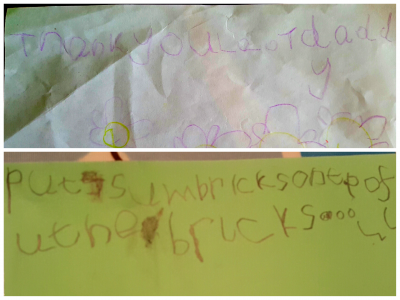 When spelling out words to him we do try and get him to sound it out and work out what the next letter will be and the school has said that him trying is more important than correct spelling at this stage. But it is hard to say “yes that’s right” when you know that’s not how it is spelt! It isn’t hard to be proud of him when he is trying so hard though and we are doing everything we can to help his learning even if it feels weird. 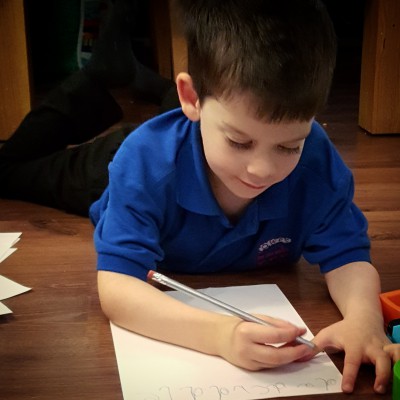 He is doing really well with his reading too. He desperately wants to be able to read any word he sees but obviously he has a way to go there. He was one of the first in his class (3rd or 4th I think though I could be wrong) to get a reading book which I was hugely hugely proud of. He tries really hard though does get muddled sometimes, partly down to a lack of concentration. It is hard to spend quiet time with him reading when LM is also desperate for attention or watching TV. When he can focus though and when he does really try he is doing so well.

Even though it can be tricky getting him to focus on his reading book, he is loving the new ability to read certain words. He is amazed when he can read a word on a leaflet or on a sign and it is wonderful to see this whole new world open up to him. In the car today he suddenly shouted “I can see ‘the'” which he saw on a pub. So sweet and lovely to see,

We had his first parents evening this week and I’m not sure you could get two prouder parents. He sailed through his phonics assessment and is meeting all of their behaviour code. They also commented on how he tries his best, even when doing something new or that he is unsure of.

We got to see his folder with some of his creations in and pictures of him busy at play. Some of the things they’ve noted he has come out with had us in stitches. For example when holding up a sort of number wheel and announced “it looks like I’m holding a steering wheel… Like I’m sailing a boat to South America!” love our boy!

We are massively proud of the way Monkey has taken to school and the way he is loving learning so far. I just hope it continues. 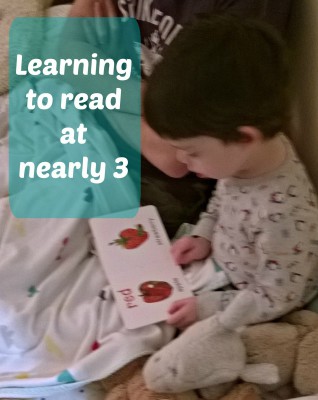 Monkey loves books, he has done for a long time. We read multiple times a day and he has so many books he adores. He knows all of his letters now, and can recognise them all. He sings the alphabet song almost constantly and we have been trying to help him understand the phonetics and sounds of letters too as I know he will need those at school and to help him with learning to read. He regularly spells out writing on things and so wants to read himself, and actually I think we are starting to head down the path of learning to read.

I am pretty impressed with this at his age I have to admit and as ever I am not saying “oh my son is amazing” or by any means taking credit for it. All kids learn at their own pace and he may be earlier with some things and later with other things. For example he is not ready for potty training yet but he does seem to want to learn to read.

He regularly points at words and wants to know what it says. When we say it, we try and spell it out and he will often repeat it. He now loves shouting Netflix whenever the big writing comes on the TV! One of his favourite books at the moment is a colours book from the hungry caterpillar collection, where he likes to spell out each word and read it. He is doing this with Daddy and how much of this is just memory I am not sure but it will hopefully help him learn that this is how you read.

Daddy is great at helping him with this and is explaining some of the more complex sounds like o o makes oo etc. I never know how far to go with it as he seems so little to me but at the same time he is so desperate to do it and to learn. He found a bottle of infacol the other day and traced the letters on the bottle and said “LM’s medicine” lol bless him!

He is so proud of himself when he tries which is just lovely and so I certainly don’t want to discourage him from it.

Were any of your kids early readers? I have no idea what is usual for this age and what isn’t!