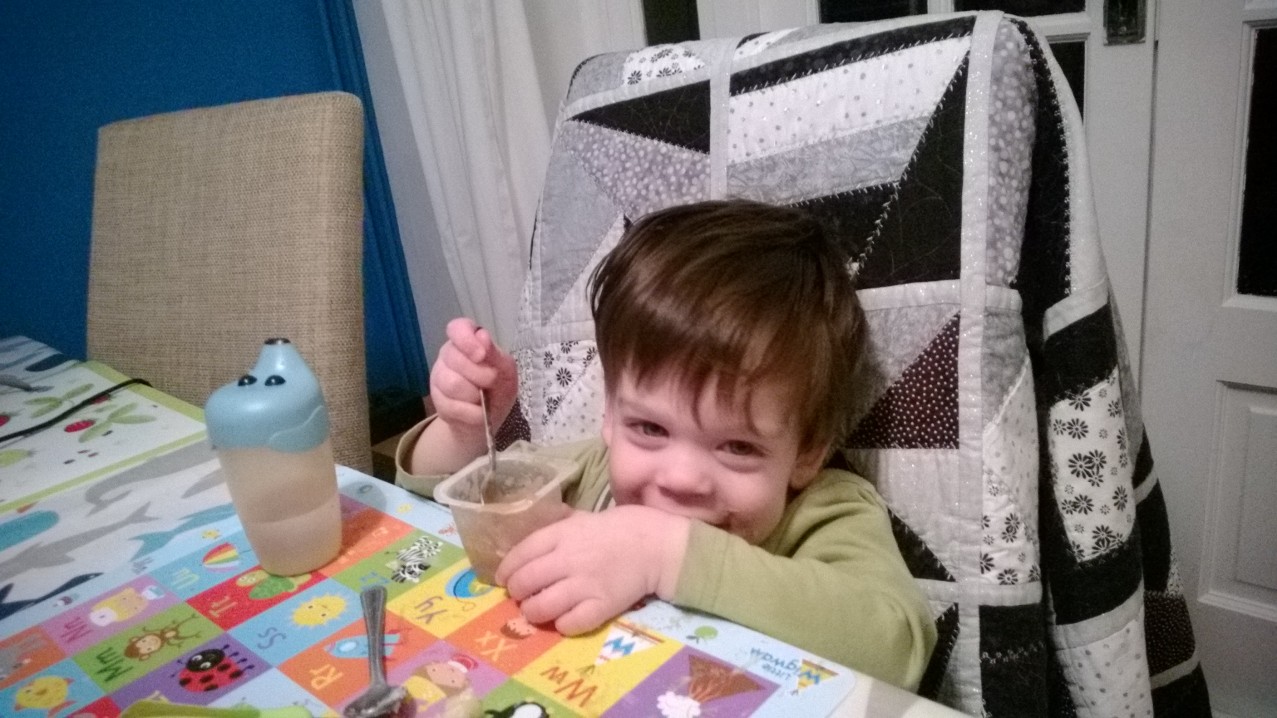 I’m sure the title of this blog left a few puzzled looks in it’s wake. It sounds daft right? Why on earth is this loony excited that her son ate pasta? If you have read about any of our, erm, challenges with Monkey’s Fussy Eating over the past 7 months then you may have an idea why this statement makes me so ridiculously happy that I ran around upstairs waving my arms in the air with glee after dinner. If not then I will explain.

At 13 months old Monkey went from a Pasta-lover to a Pasta-phobe. It wasn’t just pasta – almost overnight loads of his favourite meals slipped out of favour. When you served them up, the look on his face was like you had scraped s**t of your shoe and put it in front of him. I actually think he would have been more interested in that than some of his previously favourite meals. It made me so miserable when I would try and make something he would like and he would just pick at it or put it in his mouth then spit it out, or just sit there screaming and wailing and refusing to eat. 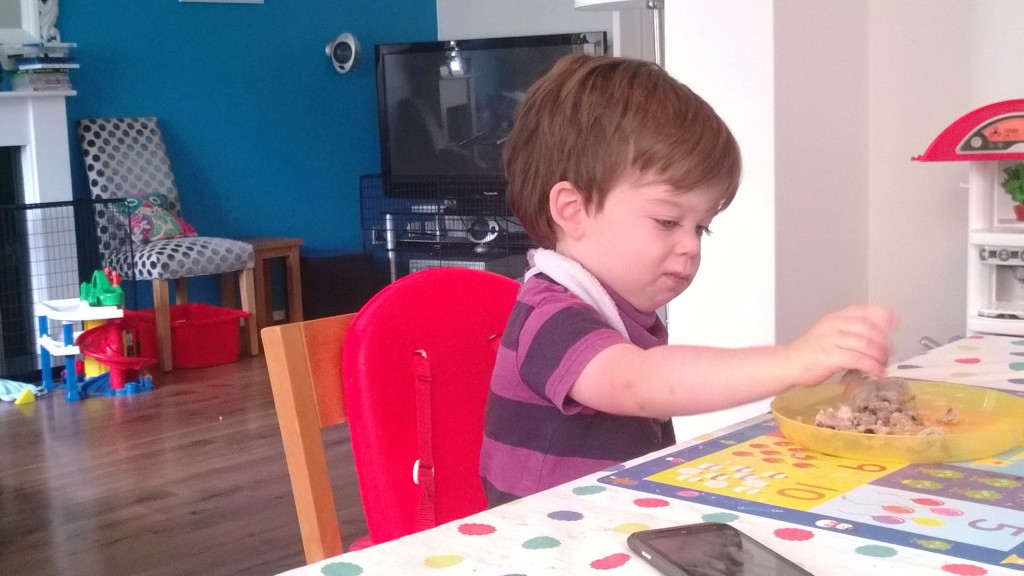 Cue months of googling and desperation. Months of mealtime battles verging on force feeding. Months of misery. How did my baby who ate a more varied diet than me, who ate nearly everything put in front of him, suddenly stop liking so much food? We’ve had ups and downs, it hasn’t all been quite that hideous but you get the idea. I know that I am not the only parent faced with this nightmare at mealtimes and thankfully I found lots of support on-line and with friends and family. 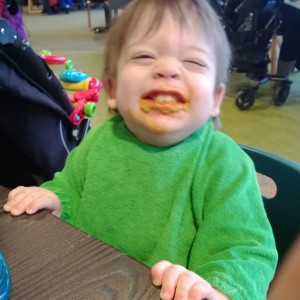 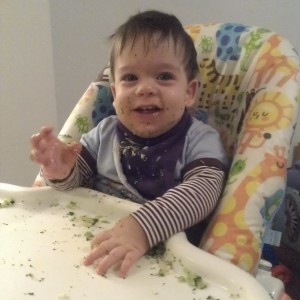 Before the days of fussy eating – eating everything!!

We tried lots of things but we weren’t always 100% committed to it if I’m honest. We were subconsciously pandering to him by giving him food that he likes rather than face a battle, but that backfired as he soon stopped eating some of the meals that we were previously so sure he would. I was giving him too much at snack time because I didn’t think he would eat dinner anyway – can we say self-fulfilling prophecy? So hubby and I had a serious chat about it and decided enough was enough and have gone down a hard line and followed the following advice.

How we made mealtimes happier with our fussy eater:

Cook one meal for all the family. It feels cruel (and depressing) making a meal that you’re pretty sure they won’t eat – but you have to give them a chance and as I said giving him foods I thought he would eat didn’t always work either. Do not offer an alternative if they won’t eat it and do not give any pudding. This terrified me at first but honestly he has gone to bed without any tea a number of times and  slept through the night absolutely fine.

No food until the next meal/snack time. I guess older kids it may be mealtime but because of his age we felt too cruel saying nothing til 6pm if he doesn’t eat lunch at 12 (cruel for me having to cope with the misery that would entail anyway). A couple of times we have re-offered the missed meal again within say 1/2 hour of the meal but that’s it, and snack time is a good few hours after lunch anyway as it’s after his nap.

We have cut down his snack sizes, we made sure that there was always a big enough gap between a snack and a meal – to make sure he is hungry enough at mealtimes. He never drinks sugary drinks anyway and we have cut down the milk he was drinking before mealtimes, and increased dairy at other times.

No reaction whatsoever whether he eats or not. We initially were praising him when he ate well but then I read that that can put pressure on them so we stopped and it has made a HUGE difference. We praise him for using his fork and spoon well and we just keep saying how yummy our food is, and we talk about a lot of other things, but NOT about whether he is eating his food or not. If he doesn’t want to eat it he gets down but we stay to eat and he gets nothing else and no reaction.

When he is finished he is finished. He doesn’t have to clear his plate. All part of ‘no pressure’. If he has tried everything and eaten pretty well then we offer him pudding – some fruit or something usually but occasionally a treat if we have one.

Get him involved with food preparation. You can read a bit more about this here – initially it terrified me, and still does in some ways – but all the time spent in the kitchen definitely makes him more interested in food and more likely to try it. In fact he would like to be in the kitchen all the time now because he associates it with yummy food!

The main rule -DON’T GET STRESSED! Nope, don’t.  Just don’t! Even when he is crying, or playing with his food or picking at it and pulling a disgusted face. No stress. Deep breaths. Actually we found playing with food is a good sign – touching it at all is a step in the right direction and one step closer to the food going in his mouth. Some things even go in and out of his mouth a few times before he finally goes mmmm, yum, yum and scoffs the rest. Sometimes he gets down and then comes back again. We just leave him to it and I figure we will worry more about manners once the good eating has solidified!

It hasn’t been plain sailing by any means – there have been very difficult days and even whole difficult weeks where he has been surviving on 2 meals a day (breakfast + either lunch or dinner) every day, resulting in a grumpy little monkey. BUT – the light at the end of the tunnel is that his eating has improved SO MUCH!

He eats baked beans again – which he had started to refuse. He eats tomato sauces again which he had refused for months. He eats sweet potato which he had gone off recently. He LOVES soups – all flavours and colours. He loves his Veggie Burgers again. He loves having a fruit pot for pudding. And the biggy – he ate a whole meal of pasta and he LOVED it!

I’ve been thinking about a post like this for a while but there was one thing holding me back. Pasta. We have played with it, cooked and dried. We have served up a variety of shapes and colours of pasta, different flavour sauces, plain, cheesy, nothing. No can do. I was trying to reconcile myself to the fact that maybe he just doesn’t like pasta? It’s possible right? But urgh, all of the meals that we have with pasta, will he not eat any of them?

Then, tonight, we tried this amazing recipe for Roasted Garlic One Pan Mac and Cheese from Taming Twins. He was in the kitchen while I prepared and actually enjoyed eating a lump of cheese for the first time I think ever while I was grating some. He then tried some out of the pan and loved it. We sat at the table and he LOVED it. Scoffed the lot. Couldn’t get it in his mouth quick enough.

My tummy was doing somersaults and I was grinning from ear to ear. Daddy and I were shooting happy, mushy looks at each other, holding hands across the table and feeling so darn proud of our little boy who was eating pasta. Trying so hard not to break the rules and gush our happiness to Monkey, no pressure, no pressure, no pressure. It’s making me well up as I type this, how ridiculous right? 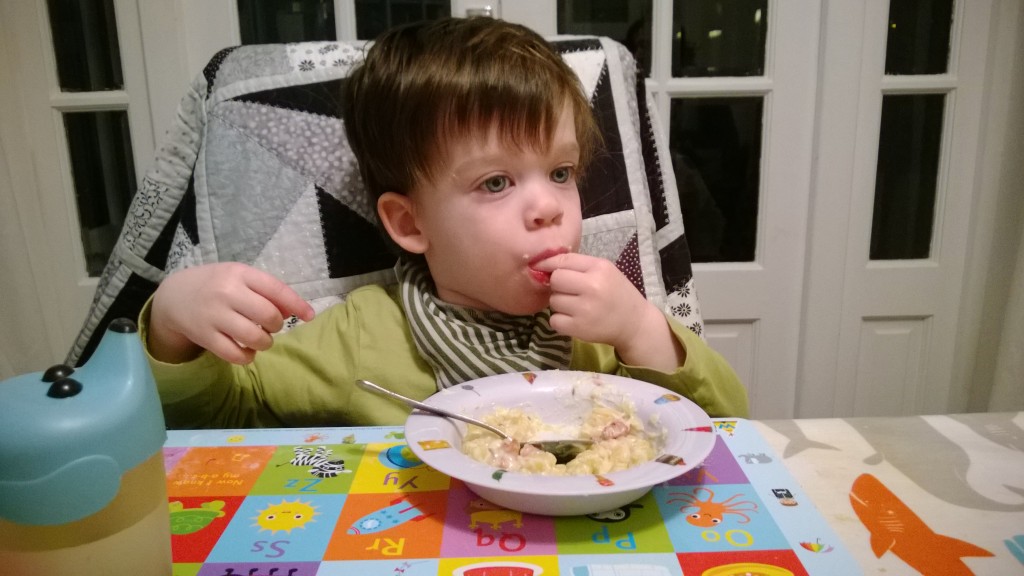 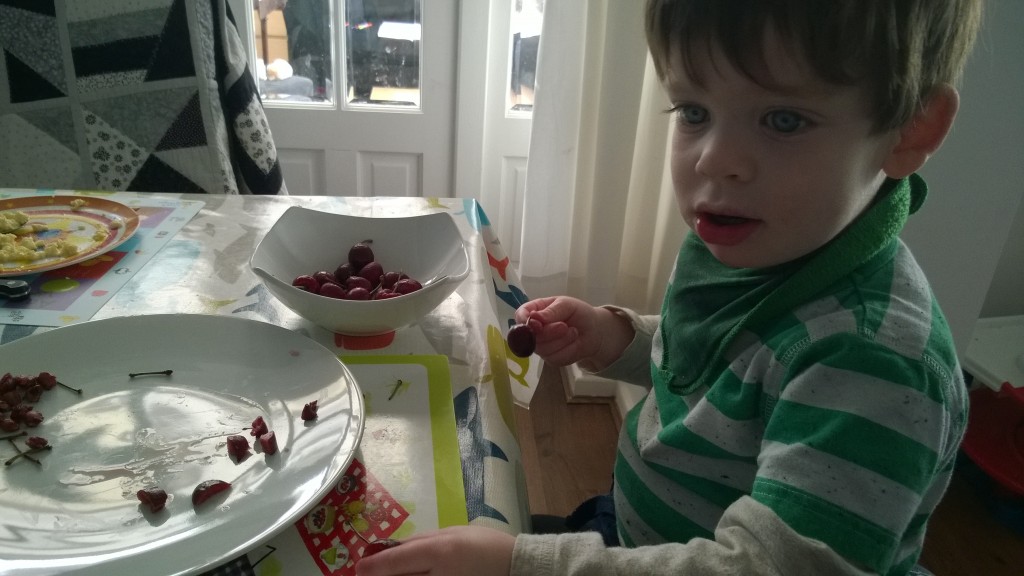 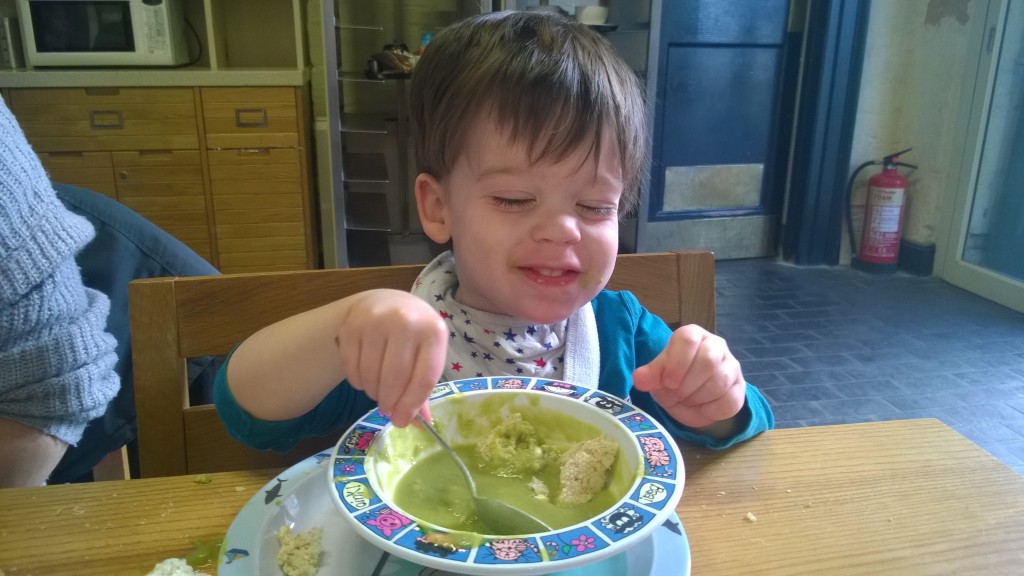 Mealtimes now are the complete opposite of what they were, they are a happy place and one of my favourite times of day. When up until recently they have been the time of day I have dreaded more than any other. Previously the site of tantrums and tears – mainly from me – now they are a place of smiles and giggles and cleared plates and puddings. 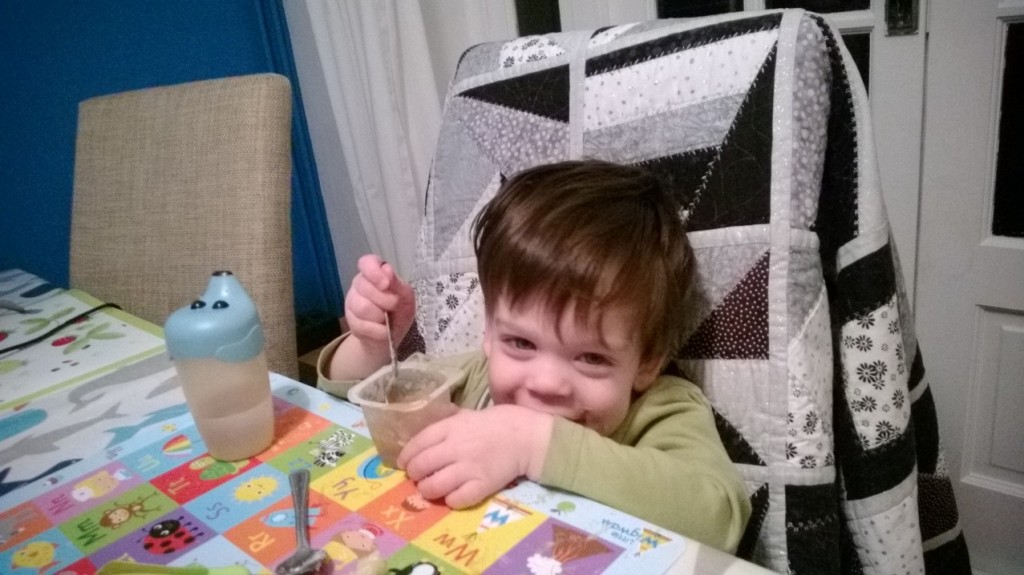 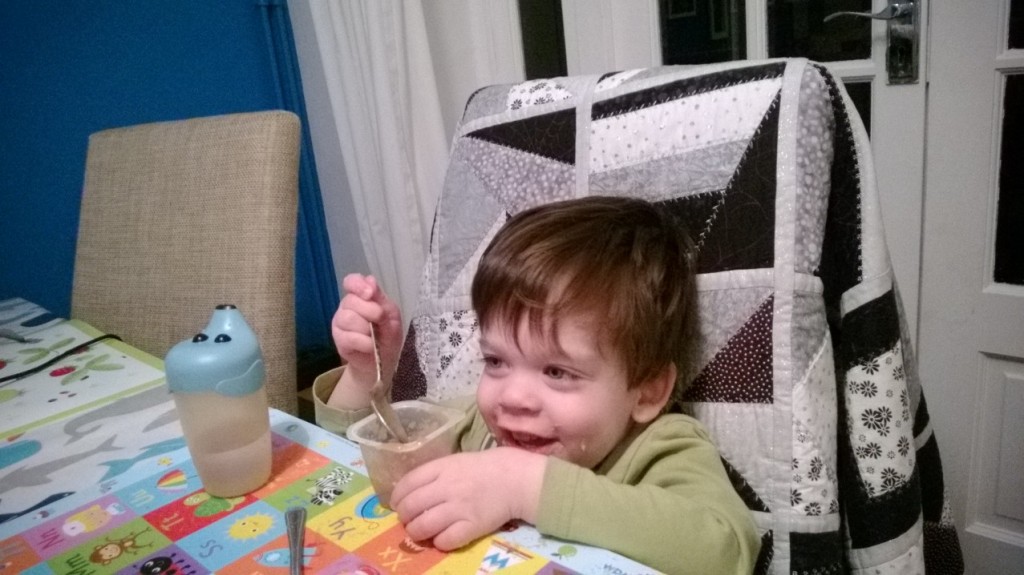 I’m not saying that now he will eat absolutely anything that we put in front of him – but it is a HUGE step in the right direction. He may still go hungry some nights but that’s ok because he is getting such a good varied diet all the rest of the time. Yay!! 🙂

88 thoughts on “Monkey Ate Pasta!!!! (and how we made mealtimes happier)”