This was originally going to be an entirely happy post celebrating some of LM’s lovely firsts this week… and I am going to include those but I can’t not mention another first which is less happy.

LM had her first trip to A&E :(. She has had a horrible cold all week and Saturday afternoon she seemed to get worse and was not feeding well at all. Sunday morning her breathing was a little laboured and we noticed a distinct wheeze. She was also hardly eating at all, barely drinking 40ml (about 1 oz) of her milk compared to the 140 ish she usually has in the morning. Being the bank holiday weekend we didn’t want to wait until Tuesday so called the out of ours GP service who wanted to see her because of her age and let’s face it, you don’t mess around with breathing! We wondered if it was a chest infection and assumed we may be home with antibiotics or something.

The out of hours GP wasn’t happy with the way her tummy was sucking in when she breathed and the wheeze and crackling he felt. He called her a “happy wheezer” as she seemed ok in herself but there was definitely something going on. At the point where I thought he would give us a prescription and send us on our way, he surprised me by saying he thought she needed to be observed by a pediatrician for a few hours and that we were to go straight to A&E.

I have to say I wobbled a bit at this as I suddenly worried that it may be more serious than we had considered. Up until this point I still had that vague guilty feeling that she was fine and we were being overly worried parents wasting their time. Definitely not the case though! We called in the troops (family wise) to help look after Monkey for the day and headed in.

Most of the staff were great, but a consultant breezed in, said some things that were barely intelligible about admitting her and having a test for Bronchiolitis, giving her a feeding tube and isolating her and then breezed off again leaving a couple of confused and worried parents in his wake. Thankfully the nurse we were with said she couldn’t do anything as he hadn’t written anything down, and that she would get one of the junior Drs to be a bit more thorough. The junior Dr came and she was great and much more helpful!

To cut a long story short LM has Bronchiolitis which is apparently very common and viral so there is very little they can do about it. They gave her a nebulizer to see if it could help clear her airways (apparently it can help some babies so is worth a try but is usually more effective in older children) which was a bit traumatic for her and it didn’t make any difference. They felt confident she would get better naturally though and actually the biggest concern was that she was eating less than half what she would normally and she had lost a little bit of weight since I last got her weighed a couple of weeks ago. 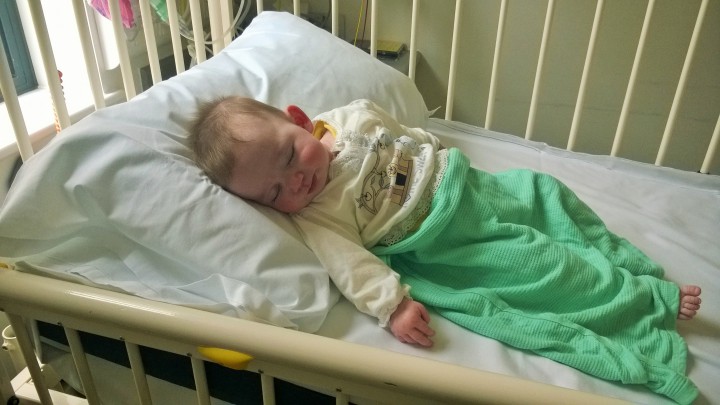 If her feeding didn’t improve then she would need to be admitted and have a feeding tube inserted and to be honest we really hoped that didn’t happen, obviously we wouldn’t have fought it as we worried about her but we just hoped that she ate a bit more on her own. They advised the minimum she needed to eat at her next feed was 57ml (don’t ask me how they worked that out!) and thankfully she ate a little over 60ml! Hooray! We spoke to the registrar who said he was happy for us to take her home but that we needed to keep an eye on her feeding and if it didn’t improve or her wheezing or anything seemed to get any worse, that we should call them and go straight back in.

Thankfully this evening she seems to have got her appetite back and is feeding much better – so these are two very relieved parents! She is still poorly and they said her wheeze may get worse before it gets better. Her cough could last up to another two weeks and she may get wheezy more frequently from normal coughs and colds as a result of the bronchiolitis but that that is normal and will go away eventually.

We are a bit shattered and wibbly if I am honest, nothing like seeing one of your kiddies very poorly to remind you how lucky you are. I make no secret of the fact I don’t hugely enjoy the difficult baby days but the thought of anything happening to our baby just doesn’t bear thinking about. So despite being horribly poorly this week, culminating in her first trip to A&E, I also want to celebrate a few of her more ordinary, very happy little firsts.

So, first up, she has had her firsts tastes of solid food! I tried some a few weeks ago and they all came straight back out, but this week some instinct kicked in and I started making purees. She has also been drinking a bit less milk this week, possibly because she is so congested, so on Thursday I just decided to see if she liked some of the roasted sweet potato puree… and she scoffed it down. The next day she tried carrot and scoffed all of that so I also gave her some baby rice, which again she couldn’t get enough of.

I had to get Daddy to watch as she was literally diving forward with her mouth open to eat more and it was lovely to see. We haven’t ever really got into a good routine with her formula she eats little one feed, loads at a next and it varies massively from day to day and has been quite stressful at times. The HVs always say it’s fine as she is growing well and taking what she needs but it does make things difficult.

For some reason I really haven’t been looking forward to weaning (probably all the pureeing, mashing, the mess ;)) but now that it is here I am finding myself so excited. It’s just lovely seeing her enjoy her food so much I think and she has been such a happy baby after she has eaten it. Maybe I am holding out too many hopes on weaning. I think I am secretly hoping that food and mealtimes will help us finally get her to settle on a routine and maybe it won’t but I do hope we are turning a corner. I really, really hope so!

She also had another lovely first on a little family outing to the park and had her first ever go on a swing! She can’t really sit unsupported yet so she did very well not to flop over and she really enjoyed being swung, so it was a lovely, lovely moment 🙂 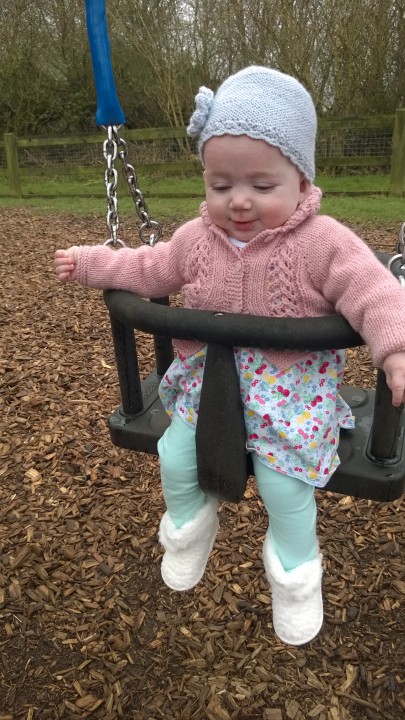 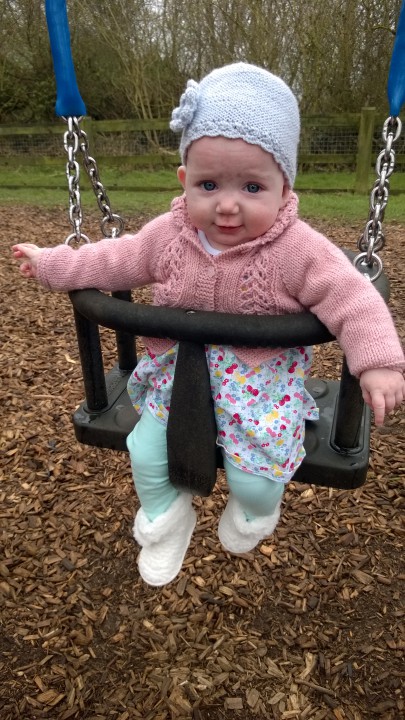