My word of the week this week is relentless. It hasn’t been entirely bad but in truth it has been pretty hard.

LM’s naps are all messed up and she seems to only wnt one nap a day (at nearly 10 mths old) so I have had to get used to having at least 1 child with me at all times. Plus she is now crawling, climbing, pulling up and standing alone constantly. Which means I need eyes in the back of my head and a lot of falling over too. No break for mummy to blog, get jobs done, relax at all – relentless.

We have been busy every evening this week, Monday we had friends round which was lovely, Tuesday I took some old baby bits round to my friend with a 2 mth old and again it was lovely to see her. Weds Hubs had a work night out and then Thurs was meant to be our first eve this week relaxing together – but LM had other ideas. Since she was just a couple of mths old she has always gone to sleep really easily in the evning, even when she has been poorly it hasn’t taken much to get her to sleep. Last night took hours. Nothing worked, she was so tired but so fidgety and uncomfortable. It took hubs over an hour of rocking and singing before she finally got into a deep enough sleep to stop idgeting and sleep in her bed. By which time hubs was exhausted so there weent our evening. No rest in the daytime or the evenings – relentless.

Then there is toilet training, which is going really, really well. But of course there are sometimes accidents. For Monkey these tend to happen after his nap. He doesn’t need to nap every day and on the days he does he wants to wear pants. Which is fine and he can hold it. But sometimes he wakes up really grotty and that’s when the accidents can happen. So this week we have had a weed on sofa 🙁 and a wet bed. Both manageable, but after the wet bed I tried to get him to do a wee on the toilet. He wanted to stand, which was fine, except he then started pooing on the floor!

Add to this the fact that as LM isn’t napping much she was there and wanting to be involved. She is crawling and climbing everywhere at the moment and just wants to be involved, so as I realised he was pooing and tried to sit him on the toilet, she was crawling through my legs headed right towards the poo! aaaargh!! So imagine the scene, trying to be calm as Monkey is a bit egg-shelly after waking up wet, picking LM up and dumping her in the hall (where she immediately starts heading back to the bathroom) trying to pick up the poo and find antibac wipes to clean up before LM gets there. Like I said. Aaaargh.

I know we will have a nice time all together and I just need to learn not to get too involved with the planning of where we are going and just go with the flow once the decision has been made I think.

Thankfully there has been lovely moments too this week, even if they are a bit difficult to catch amongst the relentlessness of it all, so here are a few pics of lovely times with my kiddies this week. 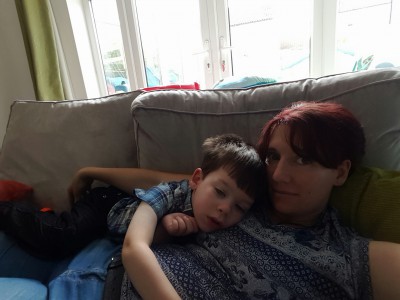 a 5 min snuggle watching aladdin before LM woke up 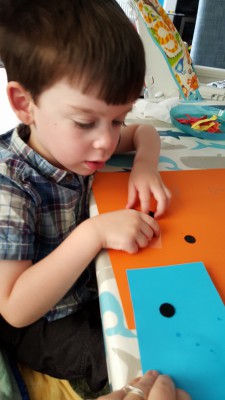 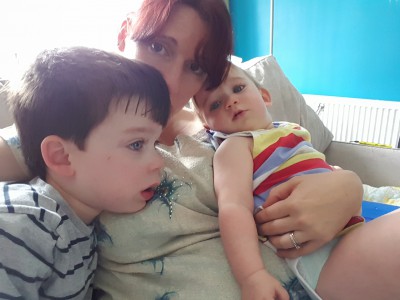 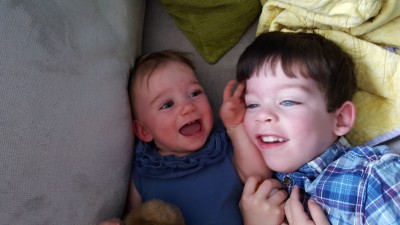 Giggly kddies beng tickled by mummy on the sofa