Monkey loves trains so when we heard about the Swanage Steam Railway down in Dorset we thought it would be a nice thing to do on our holiday. Add to the fact that you can ride the train to an amazing ruined castle and we were sold! (We love a good castle.) It isn’t the cheapest day out to combine the railway and a trip to the castle but being National Trust members thankfully we only had to think about the cost of the train tickets.

The steam railway runs between Swanage and Norden in Dorset, with a couple of stops along the way, one of which being Corfe Castle. We chose to park in Swanage, and take the train from there to Corfe Castle and back. There is a park and ride at Corfe Castle so you could, in theory take the bus to Swanage and the train back to the castle or something, but there is also quite a nice big car park 5-10 minutes walk from the station in Swanage. (There is no car park right at the station in Swanage, just a co-op with a short stay car park)

We took a little picnic to eat on the train journey and Monkey was just so so happy to be on the train. The staff were great with him and so friendly, and he loved getting his ticket stamped. It’s not a very long journey, about 20 minutes, which is probably about right with little ones and the scenery on the way is very pretty.

Corfe Castle in the village of Corfe, is seriously impressive, perched on top of a hill so you can see it for miles around.

It’s not very suitable for buggies but the National Trust to have some baby carriers available for hire and you can leave your buggy at the gate. We also saw a few people who had taken their buggy up the hill and tried to get it round the site.

As LM is too much of a fidget pants to be happy in a carrier we just carried her about in our arms. As I mentioned, we love a good castle so we very much enjoyed having a good explore of the ruins. 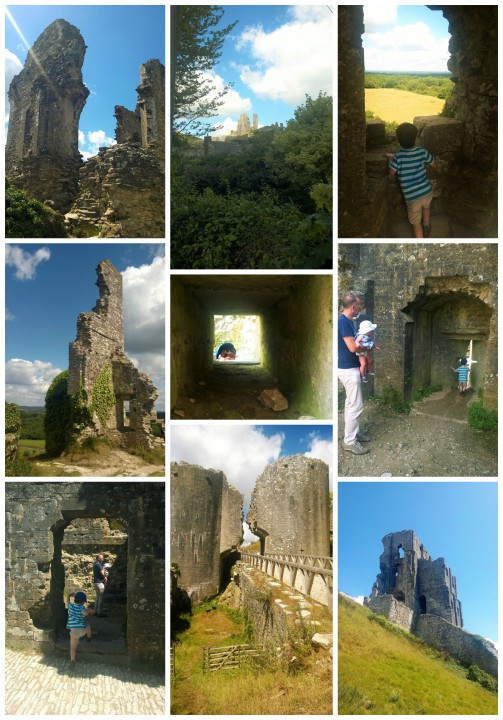 The views from the top of the hill are amazing and I loved seeing the steam train chugging by. 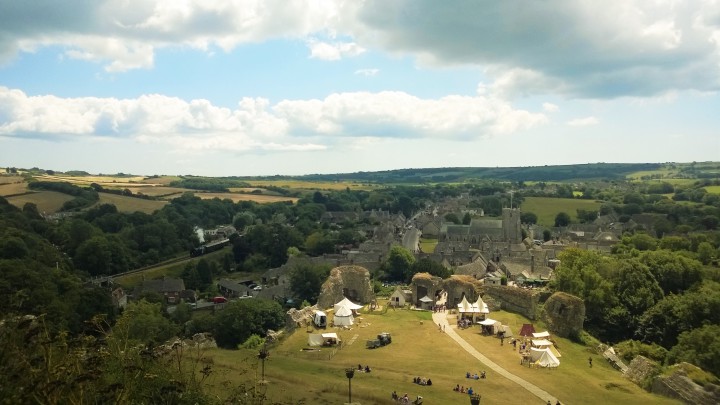 Afterwards we stopped at a little tea room and decided to have some cream tea in the gardens…. unfortunately we got completely swarmed by wasps which wasn’t fun and sacrificed our jam, moving it onto another table hoping the wasps would surround it instead of us. It worked very well thankfully but I have never seen so many wasps all crammed into a small pot of jam!

We tried to get a nice family selfie with corfe castle in the background and, well, it’s not great but not too terrible either. Not easy getting all 4 of us looking n the right direction! 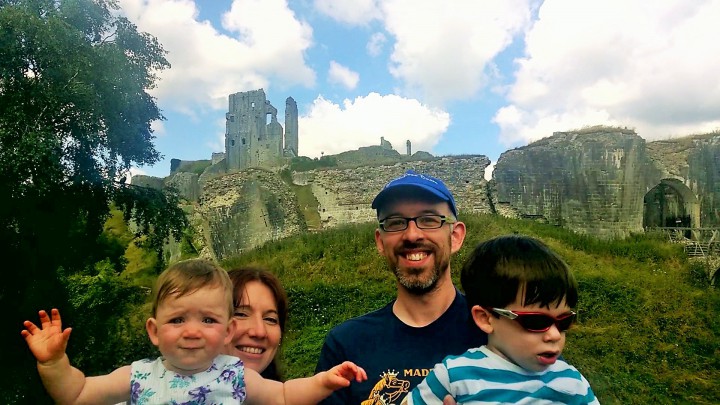 Then it was time to have another fun little journey on the train back to Swanage. A lovely little day trip.

Do your kids love trains, and castles?

On our recent holiday to Dorset one of the absolute highlights had to be the gorgeous day we spent visiting Durdle Door, a stunning rock formation on the Jurassic Coast…. but the day wasn’t without it’s challenges! I really didn’t do much research into before we went, and didn’t really take in what I did read, so I will be honest, I was completely unprepared for how tricky it was to get there. 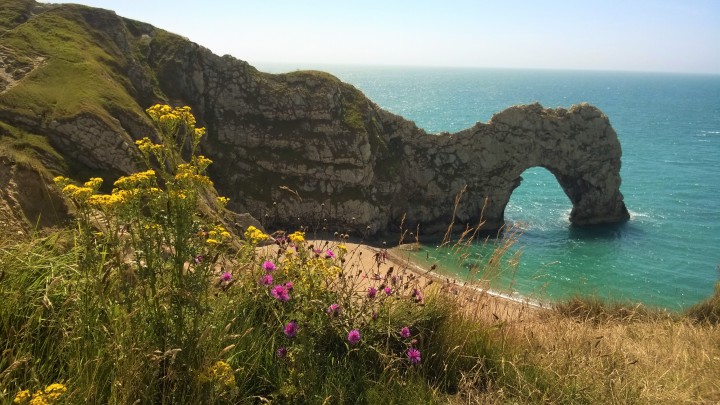 The car journey was fine and uneventful. Access is via the Durdle Door holiday park, where there is a pay and display car park. Some people were parking on the road outside the holiday park but it is worth paying for the car park. It is not too expensive really and it is hard enough getting to the beach and Durdle door itself from the car park let alone adding on another huge journey up/down a hill!

Why so hard? Well, access is only via a very long, very steep, sandy/stony/dusty (so slippy) path down the cliff-side. This gets you to an amazing viewing point. Then there are around 150 steps down to the actual stony beach. Don’t let this put you off as it is stunningly beautiful and well worth going, but please learn from my mistakes and be prepared! 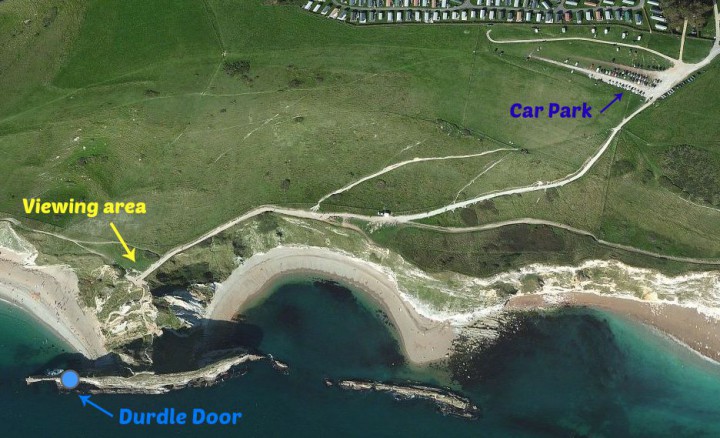 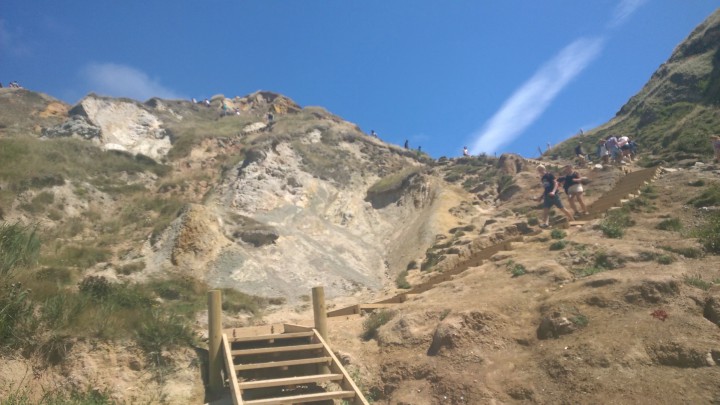 The steps down to the beach

First of all, we took way too much stuff. I had no idea what the route down involved and hadn’t really thought about the fact that the beach was stony. So we went down, very heavily laden with all manner of beach toys which we did not remotely need or use.

Our second mistake was taking the buggy – I had no idea there were so many steps at the end of the journey, it was hard enough getting the buggy up and down the slope and there is NO way you would want to carry a buggy down the steps, as it is very busy and there are no safety rails whatsoever.

So, anyway, we struggled our way down the very steep dusty slope with the buggy and all our bags clutching on tightly to Monkey and keeping him well clear of the edge, wondering how far away we were going to have to go. Then we got to the viewing level, and like I say, stunning… then we saw all the steps and wondered what to do next…. We decided to have our picnic there while we pondered what to do. 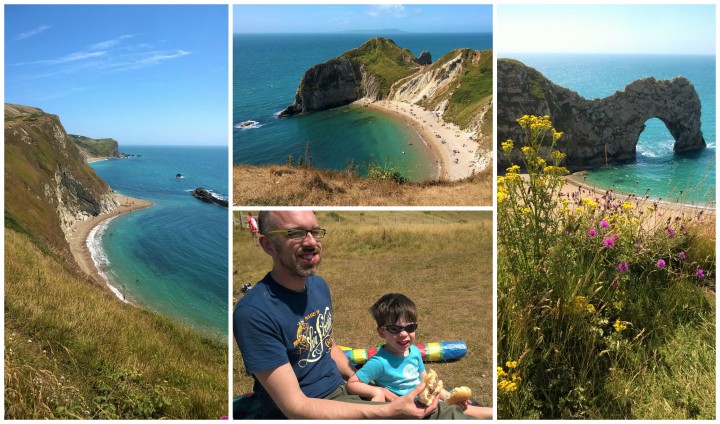 Eventually we decided we did want to go down the steps, having come all of that way. The buggy we had with us is a very cheap one we bought a couple of years ago to take abroad, thinking it may not last that holiday. It has still been going strong but we have had good use out of it so we decided to leave it at the top. We tucked it under a trailer being used as a bin and while we hoped it would still be there on our return, we accepted the risk that it may not be. (Thankfully it was there though, hooray!)

The steps were steep and there are no handrails but Monkey did so well and we managed down the steps with all our bits and bobs. We made a bit of a game counting the way with Monkey as he does so love to count! The Durdle door itself was very impressive but it was a very steep slope to the the sea and difficult to get to on the stones. Was nice to have a paddle, although neither Monkey or LM were impressed with the noise of the crashing surf. 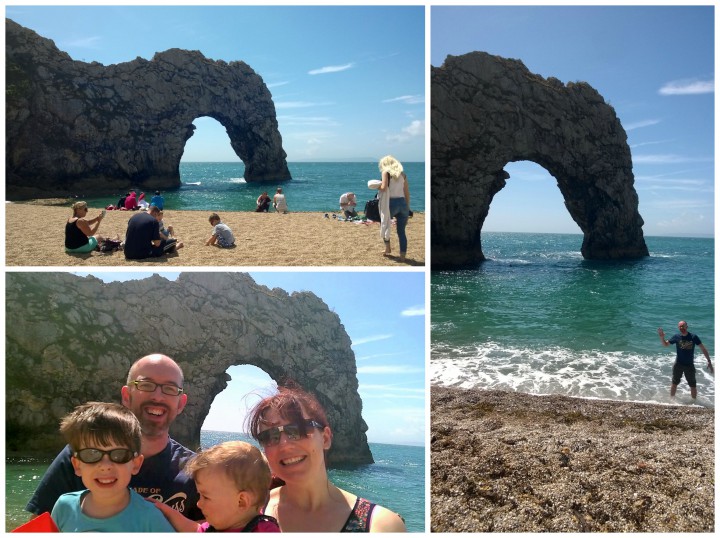 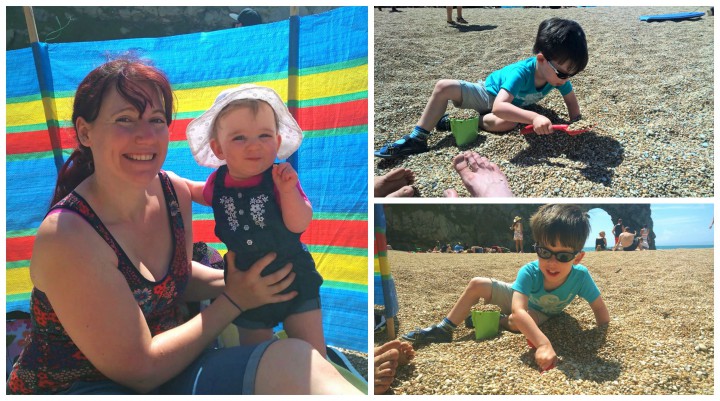 We had a lovely time enjoying the sun before it was time to start the difficult journey back up hill. Let’s just say it was definitely a slog! We stopped halfway up for some ice cream as it was so hot, but it really was incredibly hard work. It was well worth a visit, though we were exhausted by the end of it and I wish I had done some research before we went, so here is my advice if you are planning a visit.

You may have seen that we have just had a very lovely holiday in Dorset. We have been house sitting for just over a week for some friends of ours who live in a very cute, quaint little country cottage. It is picture postcard pretty but also a little run down with cracks in walls and damp ceilings and TONNES of spiders! 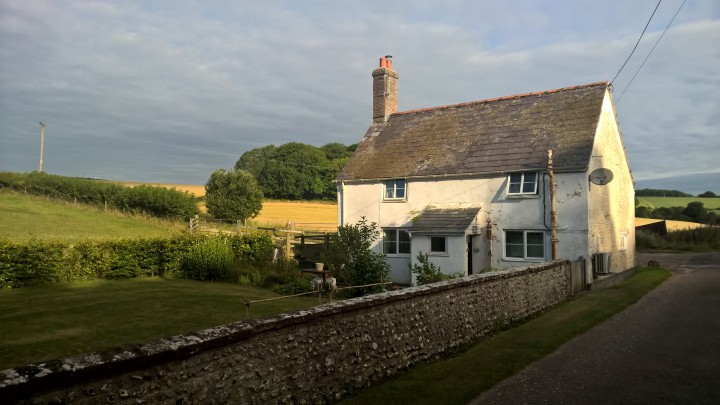 It is also in the most gorgeous setting, on a farm in the middle of the countryside. The farmer’s (massive) house is nearby along with a few holiday cottages they rent out but otherwise it is just surrounded by fields, trees and rolling hills. 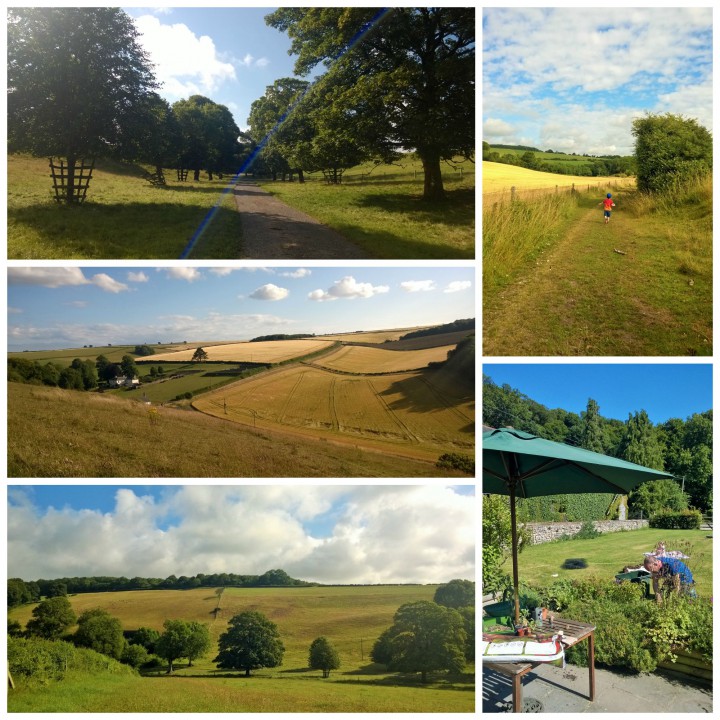 Being on a farm there are lots of animals around too, cows, horses, sheep, dogs, a”barn cat” who is a mouser that lives in the barn. She’s also about 1010 yrs old, very gentle and so good with the kiddies! The little ones have loved stroking her and even when LM has gotten a little over excited and pulled her fur (eek) she has barely flinched! Lovely pussy cat. 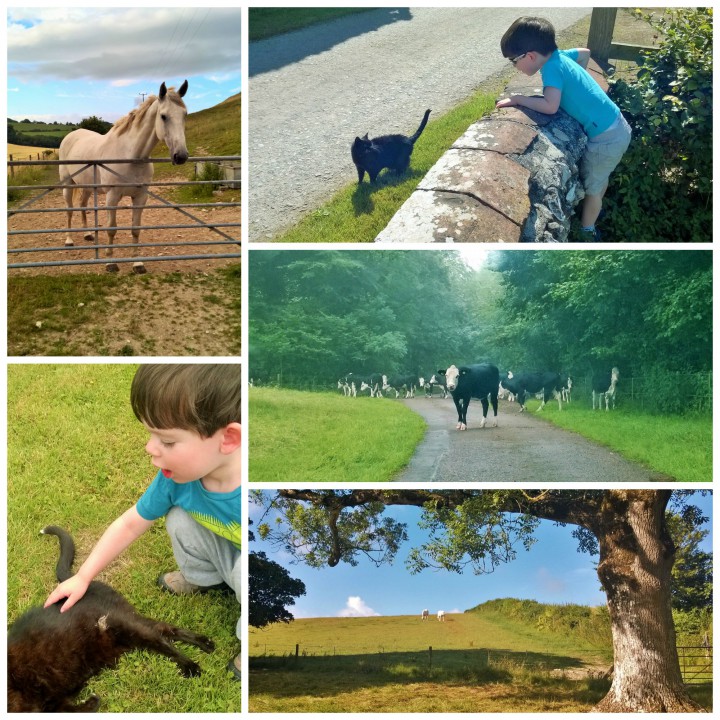 We had the real extremes of weather, from blazing sun to torrential rain and we obviously had some highs and lows. Some highs of the trip include gorgeously sunny days out to the coast and on steam railways to castles (posts about those to follow) and actually a wonderful day at Stonehenge which was in parts disastrous but also lucky and just good fun, despite being a very wet day! More of that to come in another post.

We did have some lows too, including the most disastrous trip to the beach ever. I was on my own with the kids while hubs got his head down to do some work and as the forecast was for sun headed to the beach. It rained a little on the way but hoped we were headed to blue sky. I had researched and found what I thought was a sandy beach not too far away. Then we arrived and saw this mountain of stones at the edge of a completely stony beach. 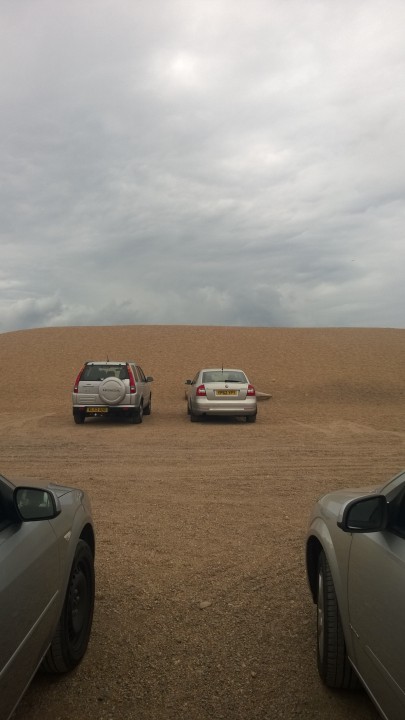 Walked around a little and could find no sandy beach so at the lowest point I could find proceeded to make a few trips up and down the hill of stones to get me, 3 bags, buggy, both kids and a wind shield onto the beach. Only to be faced with an evem steeper decline on the other side of the hill towards the sea. 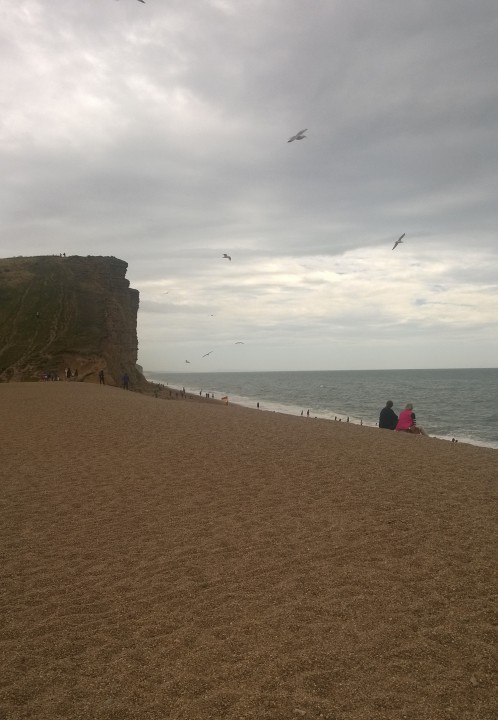 LM decided she didn’t like the noise of the sea so I didn’t want to get any closer, though it was blimmin windy at the top of the hill! I started to set up the wind shield,and the heavens (which had been darkening but I had been ignoring in my task of just getting up the hill) opened. So we ended up huddled behind the windshield, both LM and Monkey crying because they were cold and wet,trying to eat a picnic. Then the rain stopped, a few more trips back down the hill later, more screaming from the kiddies,and I packed them back in the car. Disaster!! Talk about best laid plans!! My feet hurt so much after all the running up and down the stones barefoot (my flip flops made it even worse so had to go with bare feet) and that was by far the low point of the week.

Some of the best bits though were seeing my kiddies having a whale of a time on the playpark on the farm (which had an awesome boat swing that I want to get for our swing at home) and just in running around the cottage garden. 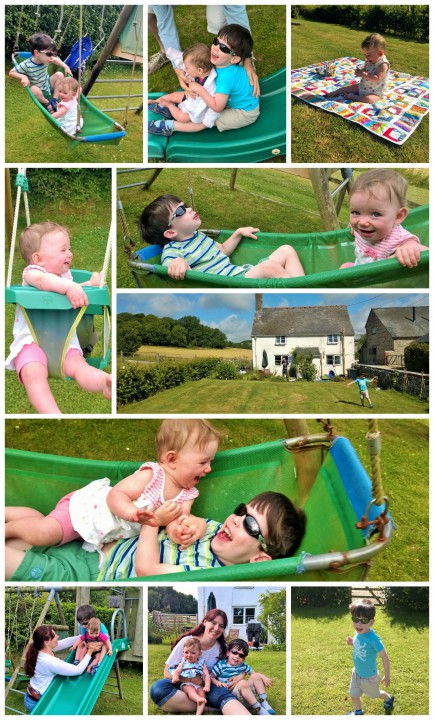 Oh and watching Monkey jumping in muddy puddles on the very wet days! 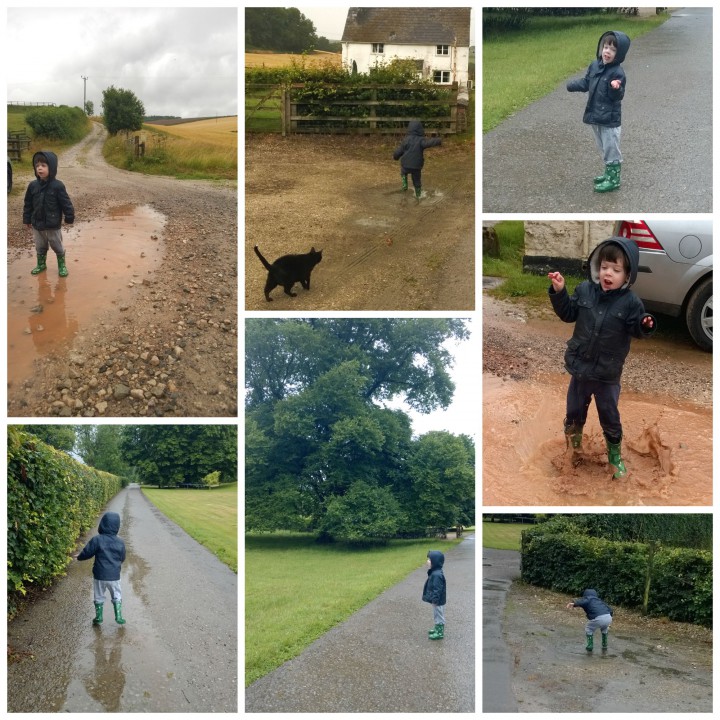 Lots of happy times and though hubs was working a lot of the time we also got a lot of time together as a family which has been very lovely. By the end I both didn’t want to leave and get back to normality, but was also looking forward to getting home and our creature comforts, family and friends.