It’s been an interesting time here lately, full of ups and downs – which makes talking about rollercoasters very apt in more ways than one. Diving straight in, sadly Hubs’ Grandpa passed away last week which is obviously very sad indeed and Hubs has been helping his parents navigate this difficult time. Add to that both hubs and I were pretty poorly last week and for some reason LM was waking up betweeen 4 and 5am every day leaving us exhausted and in bed not long after the kids.

We were a little better by Friday, still exhausted but my brothers and their lovely ladies came round for a takeaway and catch up. The kids loved seeing them as always and we had a really lovely fun evening too, just what we needed after a tricky week.

Then Saturday morning we woke up to discover my car had been broken into and the kids’ dvd players were stolen. Gutted, horrified, angry are a few words that spring to mind. The car hasn’t a mark on it so at first I wondered if a door maybe hadn’t shut properly and it hadn’t locked when I last used it… but then I remembered getting something from the car the previous afternoon and specifically locking it. So I have no idea how they got in or why they chose my car (has having the extension done made us a target??) espcially as we live in a really nice area. It doesn’t really matter though and what is done is done… It has made me so wary about what is left in the car now and making sure all our doors and windows are always shut and locked in case they decide to come back!

That day we were due to go to Thorpe Park with Hubs’s work friends and after the shock and anger from the theft had abated a bit we decided to still go… even though it was absolutely pouring with rain. The journey there was awful as it was so wet and miserable and I have to admit to wondering whether it was worth going at all. But thankfully when we arrived the weather dried up and we had a wonderful time.

Obviously going to a theme park with small children is a little different to going on your own. It was far more about the kids’ happiness than our own but they were seriously happy. Monkey was just about tall enough to go on a few rides and he had a whale of a time on his first ever rollercoaster! Although he shouted that he didn’t like it on the first loop, by the end he was loving it and he loved a wet ride too. I have to say though it is such a swizz that you are supposed to buy a full price ticket for anyone over a metre tall, but there are barely any rides that kids can go on unless they are 1.25m or 1.4m tall. There is about 4 maybe? Such a con to have to pay full price for a ticket for them! Thankfully hubs’ work paid for the tickets – though don’t even get me started on full price vs online tickets!! 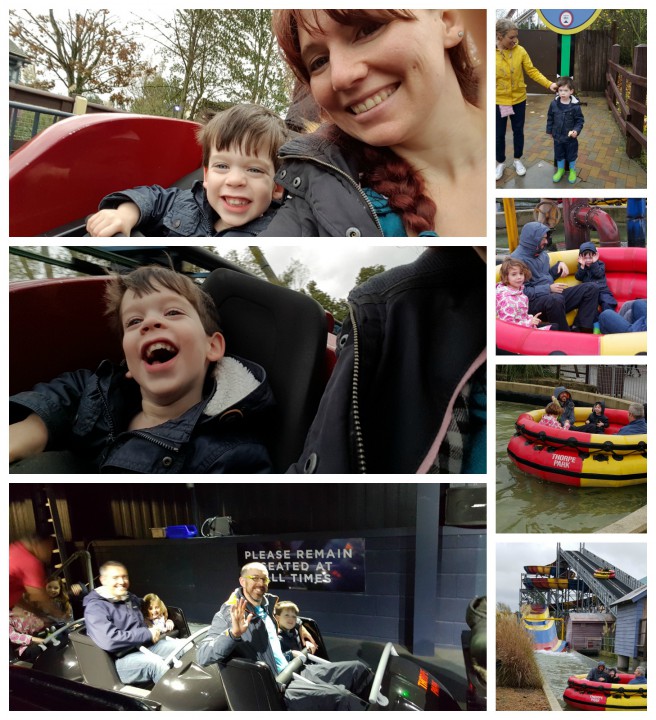 Of the rides Monkey was allowed on, we did go on a couple he was less keen on, one that was in the darkness that was a bit scary for him, and the last one we went on was a spinning one that he hated. He screamed and cried throughout and I have to admit I felt really dizzy and sick when we got off!! Overall though he had a great day though and lots of fun with our friends’ kids. LM wasn’t big enough for any of the rides but she had a fab time too… mainly splashing in as many puddles as she could find, especially muddy ones! Her waterproof trousers are far too big for her but at least they kept her a little dry, I really need to find wellies in her size though as her shoes got soaked. 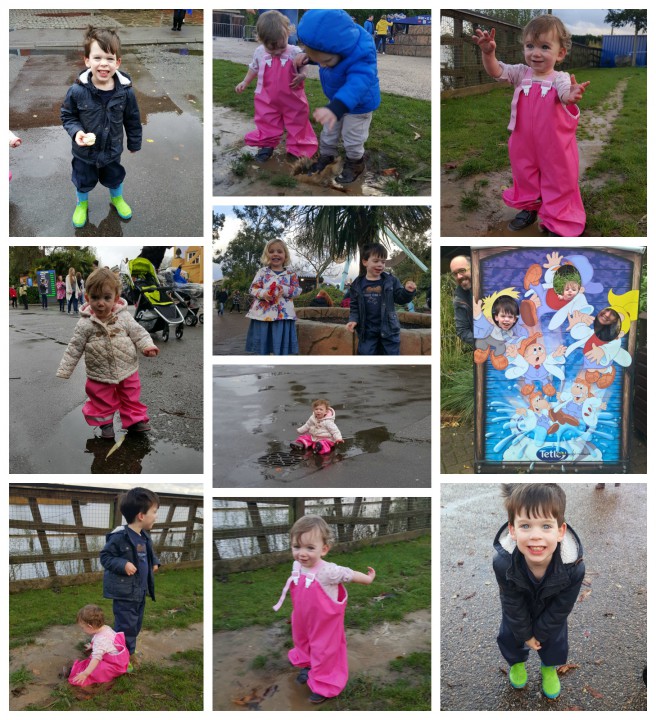 It was a lovely but really tiring day. Thankfully the journey home was much drier and easier and we made it home just in time to go to a fireworks party at a friend’s house. It was great fun and the first time Monkey had seen any fireworks. He loved the sparklers and enjoyed the firworks though he did find them a bit loud so we went inside to watch from the conservatory after a few minutes. 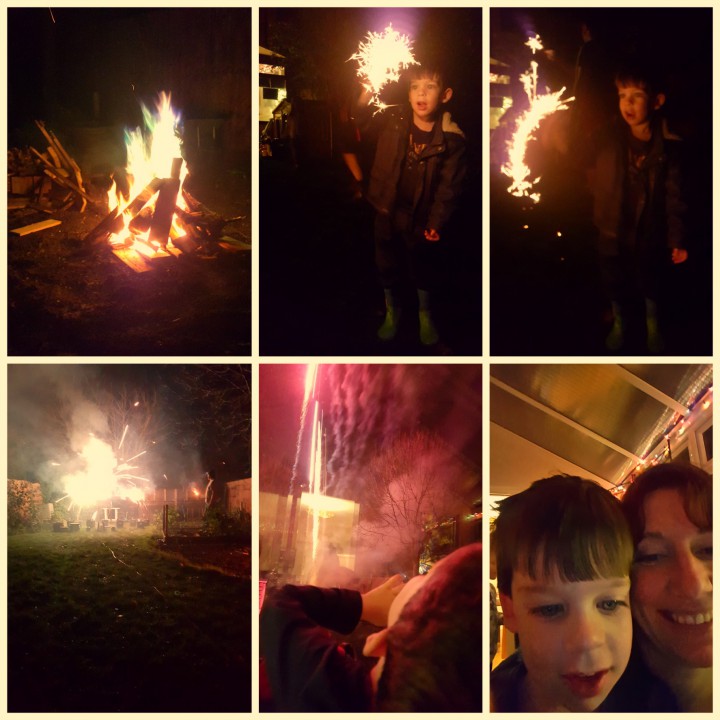 We had such a lovely time but the day was taking it toll on us and we headed home and the kids had a later than normal bedtime and we crashed straight after them, at about 8pm! Sunday thankfully was a much easier day because the hubs and I were still exhausted, and writing this on Monday, we still are. I think we need a good few more early nights to catch up on our rest and hopefully an easier week as that would be lovely…. though this morning my phone screen has died so I now have no phone while I can send it away to be repaired or replaced. The fun never stops does it??

I have really been struggling to do any arts and crafts with Monkey lately. Now LM is on the move she wants to be involved with everything we are doing and I struggle to come up with activities that both a 1 yr old and a 3 1/2 yr old can enjoy (if you have any, please share them!). She only naps once a day now too and I am generally shattered by that point so not much crafting happens then. We do do things occasionally but I rarely blog about them now and I try not to feel too guilty as Monkey is doing plenty at preschool (he now does 1 full day plus 2 mornings a week) but have really been wanting to do something new and fun with him. Tuesday mornings my parents take LM to a rhyme time group and that has become Mummy & Monkey time so today we have been making a glittery firework picture. 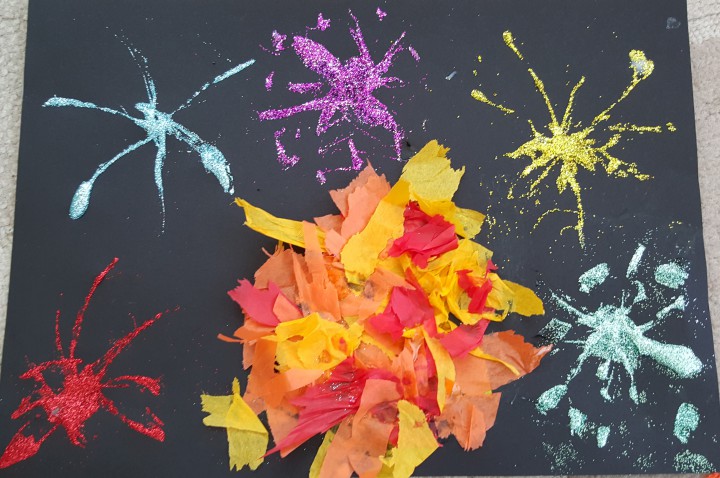 Monkey has never seen real fireworks, and has only seen them on cartoons so to start with we watched a youtube clip of a fireworks display and talked about how noisy they are. I also explained about bonfires briefly so we decided to make a picture of a big fire with fireworks around. Monkey helped me tear and cut some red, orange and yellow tissue paper which we then glued to the paper to make the bonfire. 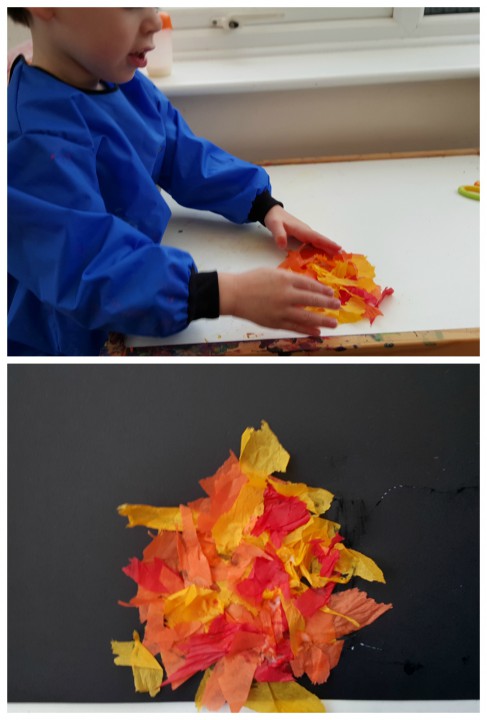 Then came the really messy bit. Glitter doesn’t come out in our house too often because it gets everywhere… but you can’t have fireworks without a bit of sparkle now can you? I showed monkey how to glue some lines and shapes on the paper and he chose the colour glitter to use. He loved pouring the glitter on and then tipping it off to reveal the picture underneath, gasping and proclaiming it was “magic!” 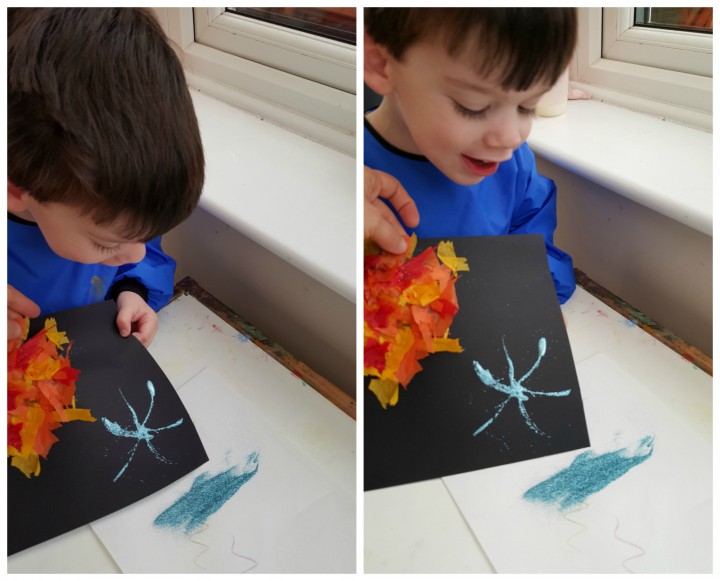 I tried to keep the mess to a minimum and tip the remaining glitter back into each container but there’s only so much you can do with glitter really. For the most part Monkey wanted me to do the gluing for some reason, but I actually preferred his shapes as they were more random so I really encouraged him to do the gluing. Because he enjoyed it so much we made a couple of other pictures just with fireworks on and I really loved his firework shapes. 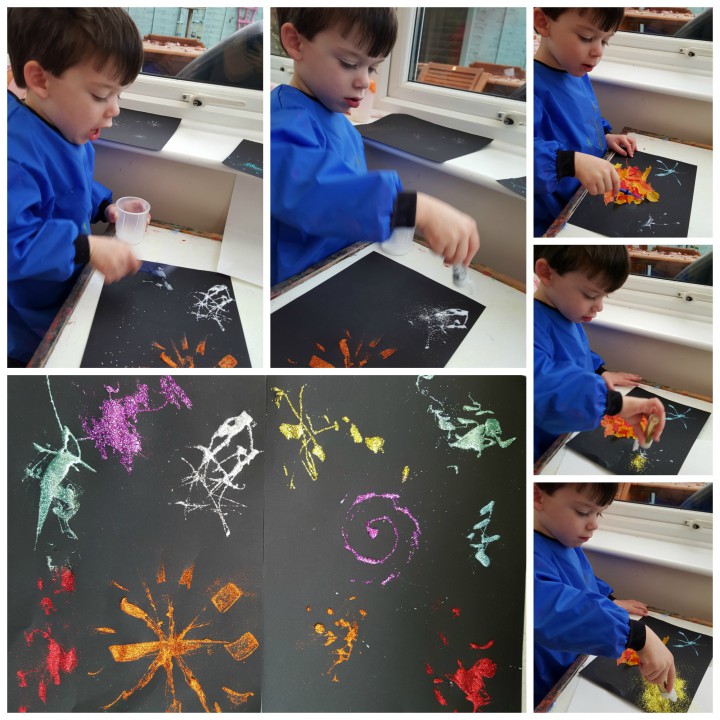 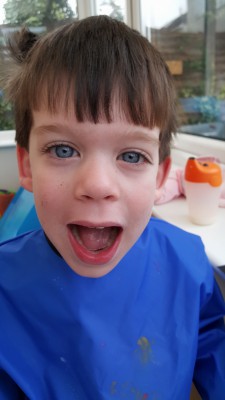 Monkey loved touching the glitter and wiped it all over his face, saying “look, I’m all lovely and sparkly now!” haha love him.

So there we have it, a very simple fireworks picture. I’ve always loved fireworks and adored making pictures like this when I was a kid so look forward to making many more with Monkey and LM as they grow.