On Bank Holiday Monday we met up with our very good friends Chris and Sarah (from Run, Jump, Scrap) and their gorgeous Gremlin. We chose to head back to the wonderful National Trust Stowe to see what it was like there in Spring and on the whole it was such a wonderful day. It was’;t without it’s challenges though as was bookended by some pretty bad traffic and well with 3 under 4s there is bound to be 1 or 2 tantrums during the day isn’t there?

The day started off well and of a couple of different routes, we chose to go via Milton Keynes, as we thought it was the fastest option. Unbeknownst to us at the time however there was a marathon on and loads of road closures. We were making good progress and then, suddenly, boom. Road Closed. No warning, no diversion, not even a reason why. Just got to a roundabout and the A421 was closed. We followed a couple of cars down a different road that seemed to lead to an alternaye route but all roads leading from there were closed too. We ended up down a dead end and waited our turn to do a u-turn. Then a parked car suddenly reversed, crashed into the side of our car – and drove off! We just sat there in shock and disbelief but gathered our wits enough to note down their number plate and take pictures of where we were and what happened.

We carried on and with thanks to google maps on my phone managed to navigate our way out of MK and on to Stowe where we tried to put it behind us for a few hours! We were lucky that despite forecasts for grey clouds we had a lot of sunshine and it was really really mild. The kids had a lovely time exploring and we had a lovely picnic. 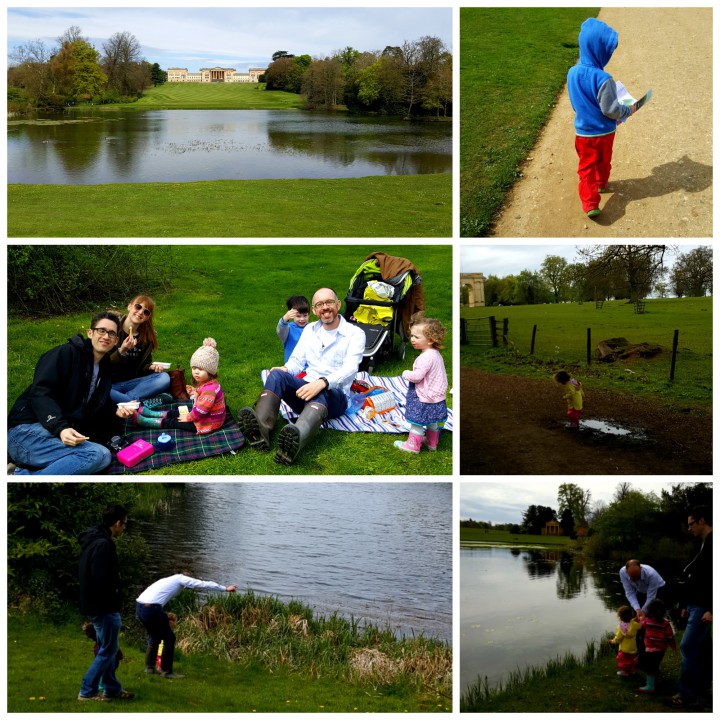 Monkey and Gremlin also had lots of giggles with bubbles and hiding under a picnic blanket together bless them haha. 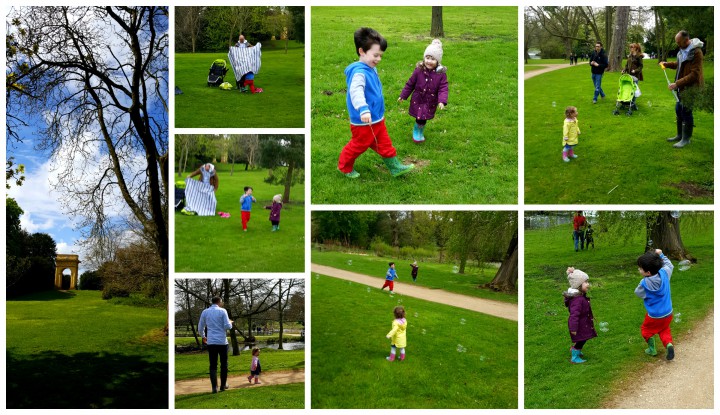 There was a lot of tree climbing going on which was lovely but also tricky when the kids are so little and there was one or tantrums at this point haha. All good fun though! 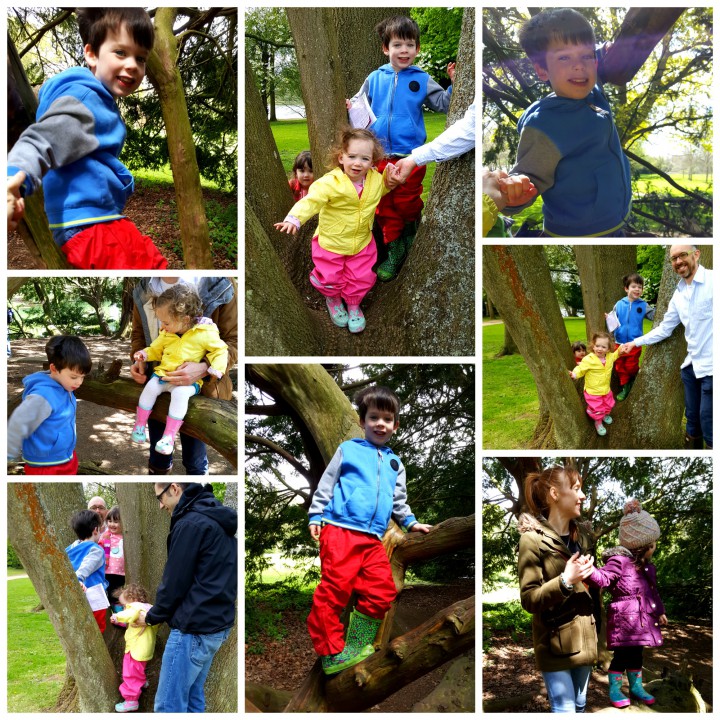 We then came to a fantastic monument up a hill which the kids adored rolling down, climbing up, running down etc. We spent quite a bit of time here and enjoyed the sunshine and scenery. 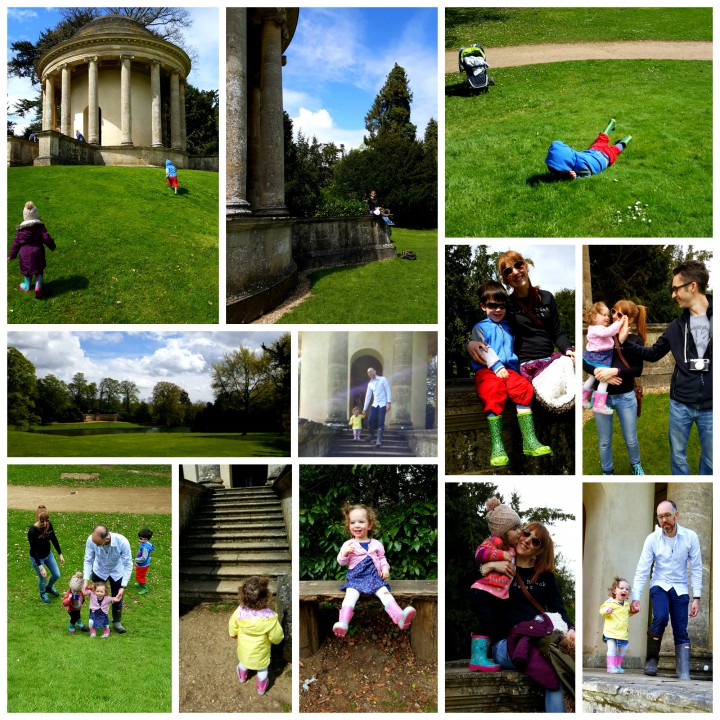 There was one brilliant moment where Gremlin was trying to roll down the hill but not really pointing in the right direction. Her Daddy tried to help only to be firmly told “no Daddy I can do it” and I have to admit when she hadn’t moved a few minutes later I did think to myself “Hmm are you sure about that??” hehe bless her. 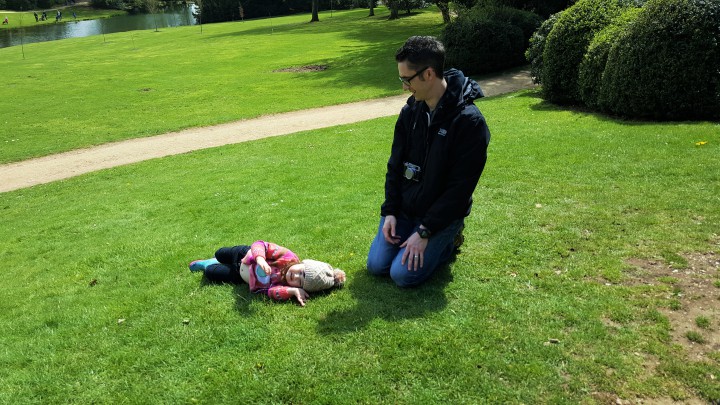 We were having so much fun that I decided to try and get a group shot of us all using the selfie stick and capturing a frame from a video. As you will see in this unedited video, it did not go too well haha.

Three uncooperative kiddies with four desperately encouraging parents! haha love it all the same as just makes me giggle, especially the Gremlin’s face! 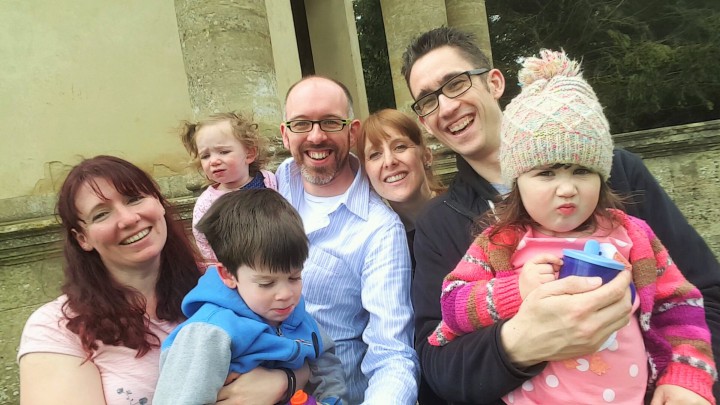 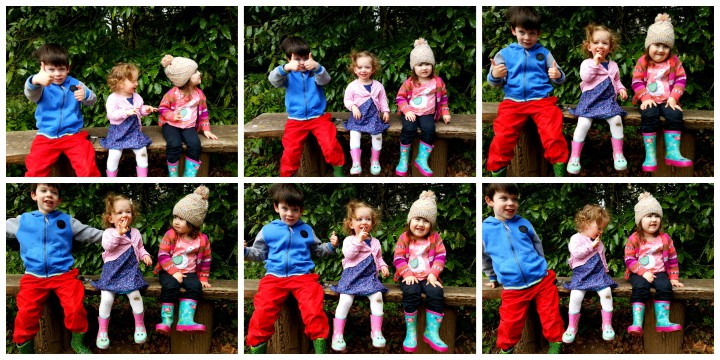 a compilation of the best 3 shots however, is gorgeous! 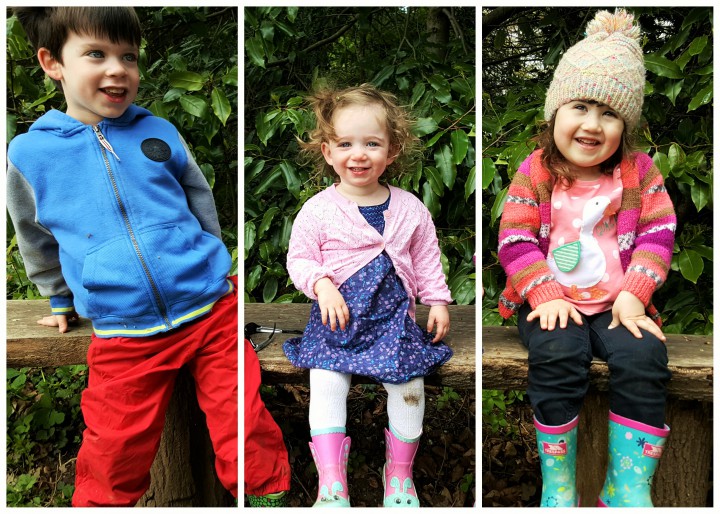 We had seen on the map that there was a cafe on the far side of the gardens so headed there. It was in one of the monuments which was so cool so we ordered and waited. Never fun keepung the kids entertained in those situations and the order seemed to be taking forever. So with stress levels rising we eventually asked what was going on, only to be told that there had been a power cut and they couldn’t fulfill our orders. Why they couldnt have told us that I have no idea! It didnt really make sense as hot drinks seemed to still be going out to other people so we didnt really get what was going on so eventually just got a refund. Thankfully we all had a few supplies left from the picnic to placate the kids and we started the walk back across to the entrance.

On that walk back it actually started too rain so maybe it all worked out for the best anyway. We eventually got back to the entrance, by which time LM had fallen asleep in the pushchair, and decided to make our way home. Thankfully LM transferred to the car easily and slept for another hour at least as the traffic on the journey home was terrible! A journey that should take a bit over an hour took over two so we were shattered and grumpy by the time we got home!

Still, none of that detracted from the fun we had with our friends. The police and insurers are on the case about the driver who hit us so hopefully we won’t lose out as a result of that either. In the meantime we look forward to catching up with Chris, Sarah and Gremlin again very soon!