Our little lady is the age that Monkey was when she was born. It feels utterly bonkers in some ways… But then I see her sometimes and think how grown up she looks and suddenly of course accurate. I think part of it is that Monkey seemed so much bigger than he was at the time. We measured LM’s height the other day and she is now only just taller than Monkey was when he was 18 mths old! Nearly a year younger than she is now! They are such different children, but this post isn’t about that, it’s about her and how she’s doing at 2 yrs 5 mths! 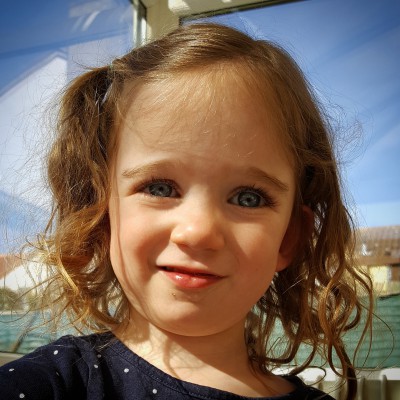 Our little lady, where to start? She is a force to be reckoned with. I don’t particularly like the label but I really appreciate the meaning behind the ‘terrible 2s’ with this girly. She is wilful, stubborn and gets frustrated by pretty much everything, all of the time. Even when I try to do what she says she wants, it still often results in a meltdown because let’s face it, she doesn’t really know what she wants!

It’s easy to make light of it but in truth I do struggle with her constant demands and unpredictability at the moment. At home she demands the tv so much of the time and screams when I don’t give in. When I try and do a nice activity or something with her to distract her from the tv, it lasts sometimes seconds before she is wandering off, or she gets frustrated that the laws of physics won’t bend to her will and she can’t make everything do what she wants it to. Then we have a meltdown and I’m left clearing up the mess while she is off, either getting annoyed by the next thing, or watching the tv because I can’t cope anymore and am frustrated that even when I try really hard, I can’t seem to make her happy.

We go for lots of walks and she loves to be out and about. It takes ages to get anywhere while she inspects stones and picks daisies and chooses her stick for the outing. She loves chasing bubbles and popping them with sticks and she adores playing hide and seek behind trees, which I love too. In truth the best times that we have are out on walks when she is free to do almost as she pleases. I still take the buggy with us most of the time so we can get home quickly if a meltdown strikes, usually because she’s decided she wants to be carried and I can’t because she’s just getting too heavy these days! 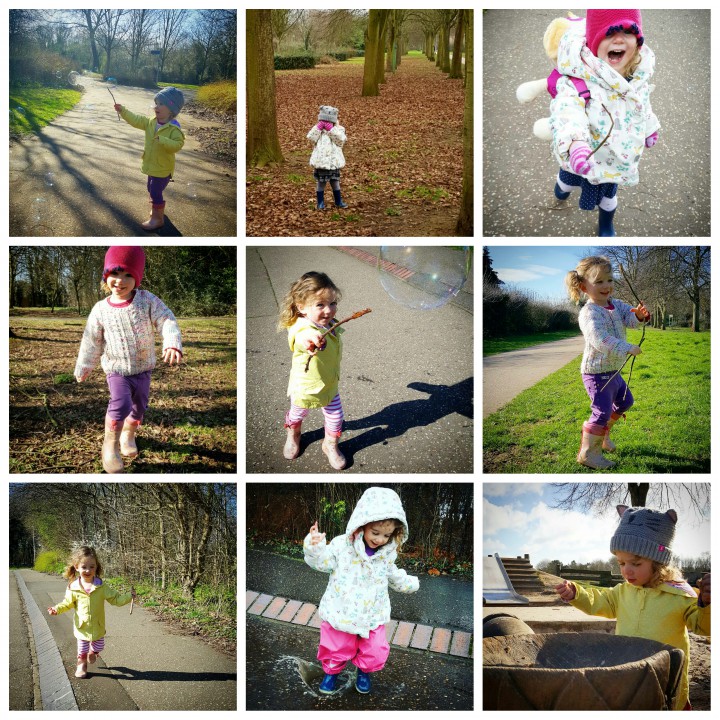 She loves riding on the back of my bike to the local country park so that makes for some nice outings too. But everything very much has to be her way. Try and impose a purpose on an outing and it soon goes awry. She loves visiting the big supermarket near us… But only to run around and see all the ride ons. Try and do any shopping and it becomes a nightmare. I did manage to give her a notepad and crayon the other day so she could ‘help’ by ticking items off the list. She scribbled on it for a few mins before the moaning started but at least it was a few minutes. When we all went together the other weekend hubs and I ended up taking it in turns to carry her out like a sack of potatoes with her screaming and kicking and waving her arms around in protest. It’s just not fun it really isn’t.

We’ve had a few times where she has refused something that she just has to do, like brushing her teeth. We will try and be flexible where we can but there are some things she just has to do, so we have used the naughty spot. I’m not going to lie it was a nightmare to start with but she has got the point of it now and she will now let us clean her teeth again without a fuss as a result. She has to know we mean business sometimes, much as I hate having to be the bad guy, as I know she needs some boundaries.

She loves her gymnastics group that we go to, though that isn’t without meltdowns. It really helps going with other tots a similar age though as it really helps to be reminded she isn’t alone in her difficult behaviour. This week’s session was spent sharing stories with other mums and making each other feel a bit better that our kid isn’t the only badly behaved toddler around. The benefit of these groups is not to be underestimated!

I know it’s just a phase and she will grow out of a lot of her challenging behaviour… But I am trying not to wish it all away too much, because she is lovely too. She’s cute as a button and I adore her cheekiness about as much as it drives me crazy. I mean how can anyone resist this face? 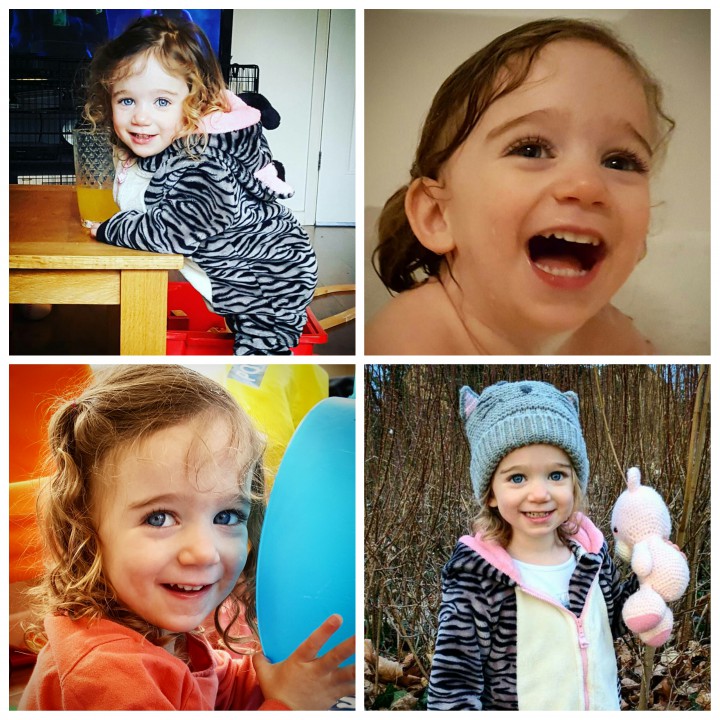 She’s chattering loads more now too which is really nice, lots more little sentences like repeating me when I said I was going to the toilet “mama nee wee wee, mama go wee wee” and in telling me what she wants to watch on TV “woh oo-ee a tagar a aneemols” (watch umizoomi with the Tiger and animals). There’s new words coming all the time “brokeh” (broken) “cay” (cake) are two of today’s! Hopefully as she communicates better the frustration levels will reduce a bit. I really hope so! I’m also looking forward to warmer days, spent in the garden where the temptation of the tv isn’t quite so great (for both of us). Maybe it won’t be any easier but I have to look forward with hope otherwise I will just sink!

She also starts pre-school after the Easter holidays when she is 2 1/2 and I think that will be good for both of us. I’m hoping the pressure will be off me a little in terms of making sure she experiences lots of things for her development as they will help her do that. We will also get a bit of a break from each other which will hopefully make the time we do spend together a little less fraught!

So what else is going on with her? Well she loves a bit of water painting, especially with her aquadoodle mat. She is a bossy britches and loves telling us all off if we aren’t painting with her, as she quite often wants company. Even when watching the tv she demands “mama, chair” patting the chair next to her so I will sit down. I don’t always comply of course as I have other things to do sometimes but it’s quite cute. When it comes to watching the tv her favourites by far are umizoomi and dora the Explorer, which I don’t mind too much as at least they are interactive, and I love hearing her shout numbers or shapes at the screen. As I type (with her in my lap watching umizoomi) she is shouting “ohwah” (oval). She also loves a bit of dressing up, with a few definite fave outfits! 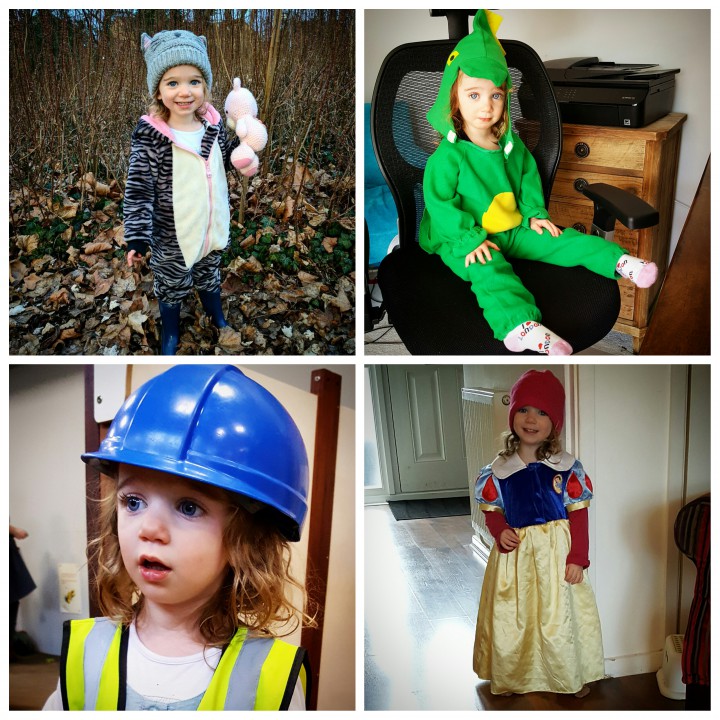 She loves being in the kitchen with me, especially when I cook her eggs in the morning and she is getting better when we bake. Whereas previously she has just played with her own bowl of ingredients, she has been actually helping me more recently, scooping ingredients in and helping me pour and stir, so that’s a nice development. She’s also helped with sorting the storks from the kale and likes to chop with our child friendly knife.

She loves to run around the house with a big cheeky smile on her face, so anything that involves chasing or running or tickling is good with her. She loves a good dance around the living room too :).

On the less positive side she has developed a terrible fear of dogs recently. A friend’s dog bounded over to her reducing her to awful screams, and now she screams and you can tell she is literally beside herself terrified when a dog comes near her. We are trying to be positive and talk about how lovely the dogs are, she will wave to them from a distance sometimes (when she’s not hiding behind her hands) and we’ve tried to get her to stroke some lovely gentle dogs we know, but so far she’s not having any of it! Any tips (that don’t involve us getting a dog) please let me know!

Another great habit, which daddy in particular just LOVES, is that she is pretty constantly picking her nose at the mo. Delightful eh?

So there we have it, our beautiful, challenging, loving and tempestuous little miss, at 2 yrs 5mths.