Ah toddlers, they really are funny aren’t they? And hard work, quite a lot of the time! Our little lady at just over 2 is now a fully-fledged toddler. I love watching her learn and find the funny ways she likes to do things generally very amusing… Though sometimes they can be really exasperating! The good thing with a 2nd (and presumably 3rd,4th etc) child is that you’ve seen much of it before and know they will grow out of their little quirks and obsessive habits, so I am more entertained by them this time. 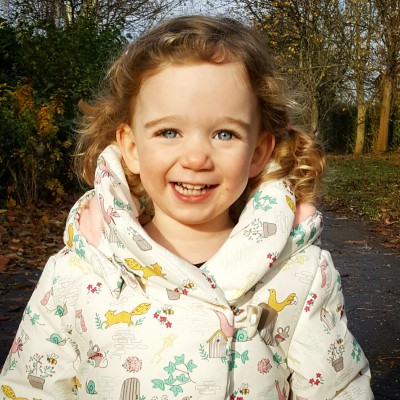 So what do I mean? Well let’s start with some of her OCD style habits. Things have to be done in a certain way at the moment or all hell can break loose. Food in particular is easy to get wrong. Heaven forbid I split a chunk of cheese in half so her brother or I can share with her, no, it has to be the full chunk (I buy these little pre-cut chunks of cheese, yes pricey but oh so handy as an after school snack) or she screams and shouts ‘yuk’ and just won’t go near it.

I made the mistake of helping her break apart a peanut snack bar yesterday thinking it would be easier for her but wow was she not impressed by that! Drinks have to be in the right cup with the right lid (ones that meet her approval that is) and food has to be prepared and served in the right way. She’s basically a creature of habit and likes the repetition. It’s also about control, I know, as she gets to control so little in her life. 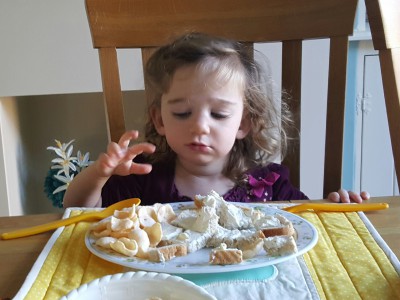 Food is very much an area of contention for us, with her refusing to try anything new and sometimes even refusing favourites. We went through this with Monkey and though still quite particular he is so much better now and eats almost anything we give him, even if it can take some persuasion at times. So we hope LM will do the same and it will get easier over time. In the meantime we do what we can, thankfully she eats a lot of our regular favourites, curry, thai curry, my homemade soup, the right pasta in the right sauce and the right type of tortellini, my homemade carbonara and a few others. The rest of the time we make it and she either eats or she doesn’t, which basically means that she doesn’t. It feels wrong at times making a meal that I know she won’t eat but while I obviously make sure she eats most of the time, I can’t run the rest of our lives around her fussiness and I absolutely refuse to make her something separate.

She’s so particular that even a slight variation will mean she refuses her food and that can turn her off for good. We gave her a different brand of baked beans once and she hated them so much that she now won’t eat or even try any other beans, which is a real shame! I once gave her the same shape tortellini as normal but that had a different filling, and even though to be the difference was barely perceptible, she knew and dissected them and only ate the pasta and not the filling. It took a while for her to trust that her regular tortellini was the right one either though thankfully she is back to loving those again now. Anyway, I don’t get as stressed about this as I did with Monkey as we have been here before and just hope that she will eventually come out the other side. The downside though is that eating out is a nightmare, she is so particular that she won’t even eat a pasta and tomato sauce or carbonara as it isn’t the same as ours and we can’t even fall back on beans on toast in a café anymore. Sigh, she will grow out of it, she will grow out of it, she will grow out of it.

It’s all a variation of the same thing I think, being in control and liking repetition and the familiar. She’s the same with toys in that she likes to play with them in the same way over and over. We have a postbox colour matching game which she loves. When we started playing and she didn’t understand the concept of matching the colours, I would say no when she went to put a letter in the wrong postbox. Now even though she knows the colours and where they go, she will imitate me, putting it up to the wrong post box and saying ‘no.’ She’ll do this to each postbox before putting it in the right one. It is cute but a bit repetitive for me haha.

She also loves jigsaw puzzles at the moment. She loves making them then immediately breaking it up and starting over. Usually until I can’t take it anymore and we’ve done the same puzzle together at least 5 times, and try to distract her with something else! I am impressed with how good she is with them though and she is improving all the time. Her favourite is a big farmyard puzzle and we talk about all the animals as we make it. She like starting with the horse (she neighs rather than says horse) then it’s all about the moo and the baaa and the “buk buks” (chickens lol!) As soon as it is completed, with a shout of “I did it!”, and “ta laa” (her version of ta daa) with her hands thrown in the air… then she immediately crouches down and breaks it up ready to start again haha.

Towers are something that I think all toddlers love to build, and LM is definitely no exception. The duplo is out a lot now and she even builds them out of her brother’s lego too. She is funny though as I’ve noticed a real trend lately where she has to match the colours. She’ll build an all red tower or an all green one. If she runs out of that block she may change to another colour and keep going with that one but she really doesn’t like a multi-coloured tower when she is in that mood! 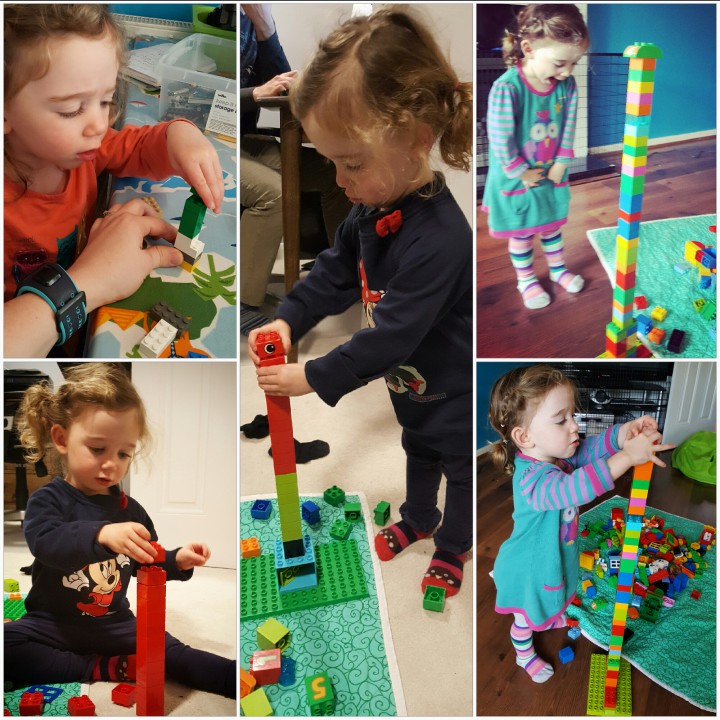 When something isn’t going the way she wants then the frustration can lead to a major meltdown. I mean she really goes for it. Throwing herself on the floor face first and oh the screams! I try and not worry too much as I know it’s just what they do and when it is because I won’t do what she wants, well she has to learn that things won’t always work the way she wants them to. But her screams are so loud that she turns heads for miles. I try to be stoic and make a daft comment like ‘oh you are noisy’ or ‘I know, it’s the end of the world’ mainly for the people around me so they know nothing terrible has happened, as seriously her screams are bloodcurdling!!

Moving back to cuteness and another of her ways that is seriously cute is her love for teddies recently. Her brother was the same at this age and it is adorable. She just wants to be surrounded by her favourite cuddly things. They surround her in bed at night and when we come down in the morning she almost always demands that they come down too. I pick her up with her blanky and her faves… then it’s “bear” for the polar bear “buh” for the blue bus, “wah wah” for the duck “baby” for the baby doll and some less decipherable noises and pointing for the others. It got to the point where we literally couldn’t carry them all so started using her blanky as a sack to carry them down in haha. She loves snuggling on the sofa surrounded by them all and it is adorable. Again I know she will grow out of it so this is one of the ones I’m making the most of while it lasts. 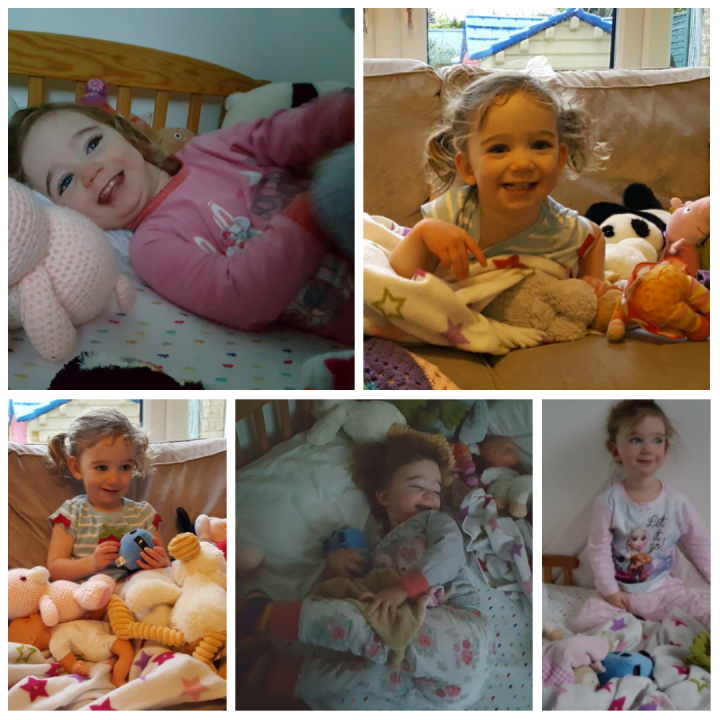 I’m also making the most of her learning to talk as it is such a cute phase. the things she comes out with! As I mentioned above she calls animals by the noise they make now, apart from cats, which is a chat haha. She loves naming body parts which is adorable and after calling every adult she knows “mama” for some time, she is now starting to call me mummy and daddy is daddy, which is lovely. She wanted Daddy’s attention in the bath the other day (he was dealing with her tired and grumpy older brother) and I just heard her shouting “daddy, daddy, daddy” till he said “yes LM” and she held her foot up and said “Daddy I got toe!” so sweet! She really likes to make her feelings known now that she can too, and can often be heard shouting ‘waht way’ from the buggy or car seat pointing in the direction she wants to go in (Often screaming when we go a different way lol). I’ve put together a quick video of her latest chattering mainly for my benefit tbh but you can have a look if you so fancy.

There are some things I can’t wait for her to grow out of, but some of her ways are just adorable and I want to enjoy them as much as I can. As hard work as she is sometimes I adore attaching her learn and explore and seeing her grow up right in front of our eyes. 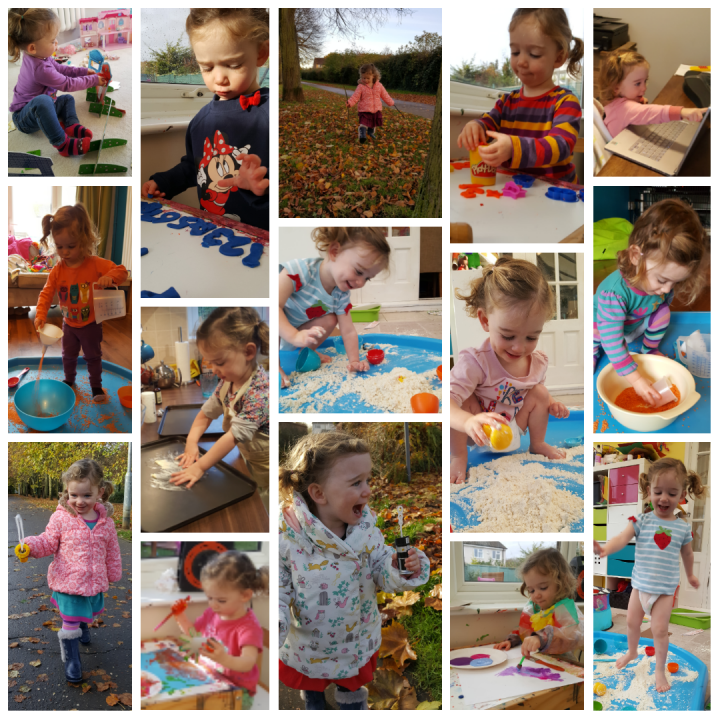