This was another idea I got from Pinterest actually, but again I cannot find the place where I found it initially. So annoying as I don’t want to take credit for other people’s ideas! Oh well though anyway, the idea is that if you take a Pringles tube, (or any other tube of crisps, with a lid) and cut a rectangular slot through the lid so that business cards etc. can be posted though. This helps with fine motor skills apparently! Monkey loves it though anyway, he loves it putting the cards in the slot, and he really loves shaking the tin around afterwards! 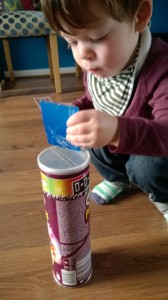 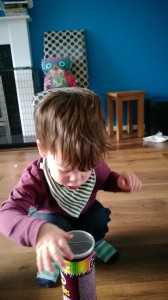 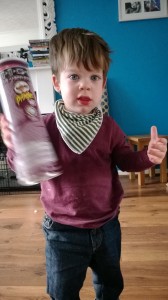 He pretty soon discovered how to take the lid off the tube and that it was much easier to get the cards in… and lots of other things. 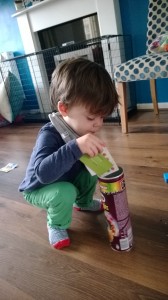 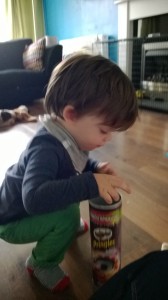 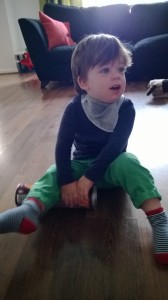 He basically loves this tube, but he also loves posting thing everywhere. He has a tunnel that granddad made for the brio train set, which he loves posting things through, and he spent ages posting crayons down an old wrapping paper tube with his Nanny the other day! 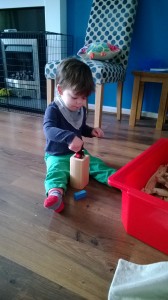 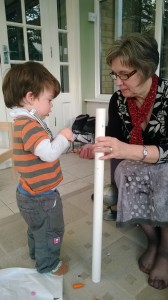 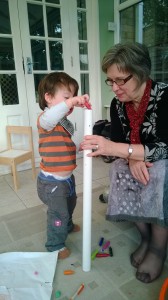 He also loves to post things under the sofa, behind cushions, under my legs, behind my back, through the bars of the door-gates, through the fire guard… you get the idea! The good thing about the Pringles tube though is that it is handily arm sized so he can get things out again, some of his other posting favourites lead to a lot more frustration, so I try to give him the Pringles tube whenever he is in a posting mood hehe!

In other news we have had a whole week of Monkey eating his dinner! Woohoo!!! I know that these things can change at a drop of the hat  but please, please, pleeeeease let him be growing out of that phase! Even if not though I have enjoyed this week as it has made it so much less stressful that he has eaten his meals. Don’t get me wrong I have had to put in a lot of effort to get this to happen but at least it has paid off, so I am v happy 🙂