We did it! We have made the move from cot to bed and so far all has gone pretty smoothly!

We talked about making the transition a few months ago, and felt perhaps that neither Monkey, nor Daddy and I were quite ready for it. Then I fell pregnant and the problems with my pelvis started to flare up. With a new baby going to be needing the cot at some point we wanted to make the transition far enough in advance that Monkey wouldn’t feel pushed out of his cot. But then with my pelvis problems meaning that I shouldn’t lift him very often, if at all, we know we really should make the transition even earlier.

A while ago we bought his bed in the sale and he had really liked it in the shop. Keen to involve him in the process we took him shopping to buy some bedding, even though I had an idea of what to get him. A lot of the soft furnishings in his room are already matching, with a lovely cloud pattern which he adores, so I hoped that buying the same range of bedding would attract him to it.

We weren’t sure whether to ease the transition by having both cot and bed in the room for a while, or to go cold turkey and take the cot out straight away. In the hopes that it would make it easier, we did the former. He liked his bed immediately and cuddled up with his bedsheet – though he hated the duvet and pillow and wanted nothing to do with them! We will worry about those at a later stage I think! Too much all at once. 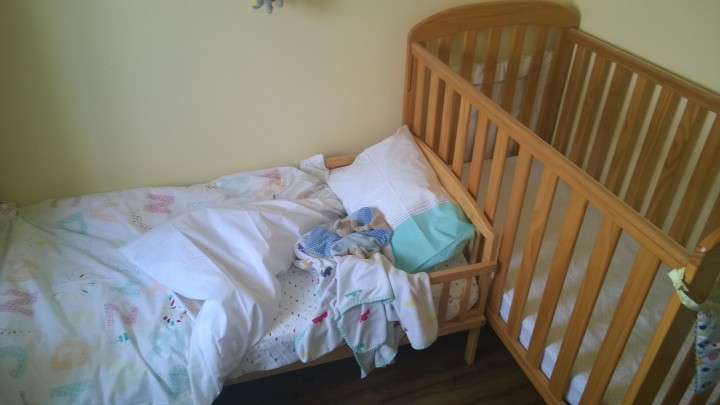 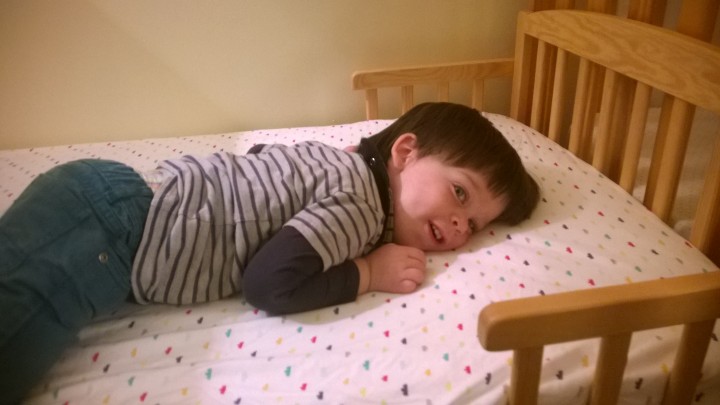 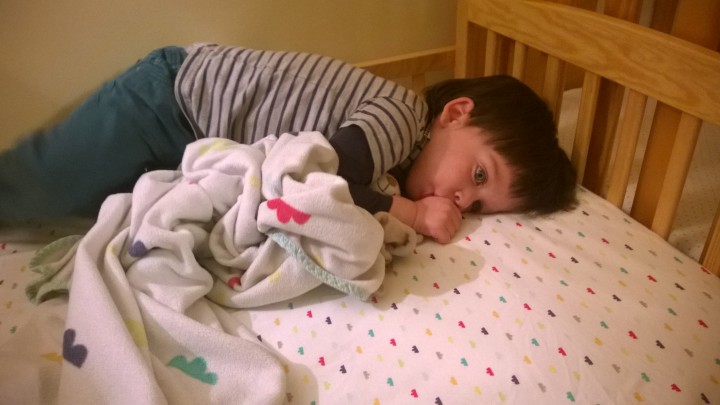 But even though he liked his bed and lay down on it, as soon as it was nap or night time, he would get off the bed and try and get in the cot. A week of this and we realised that he would never sleep in his bed while his cot was in the room. Which makes sense really, but we were nervous of his reaction to us taking his cot away so we waited until the Easter weekend, when we had a good stretch of hubby being off work, in case we had a few sleepless nights!

Good Friday was the day. After his nap, hubby dismantled the cot and put it away, moving his bed to the position his cot was in, and hanging the little cot pockets that used to be on his cot, onto the end of his bed. I know this seems to be a weird position, but has always slept with his head by the door, and well, why not if it makes him happy? 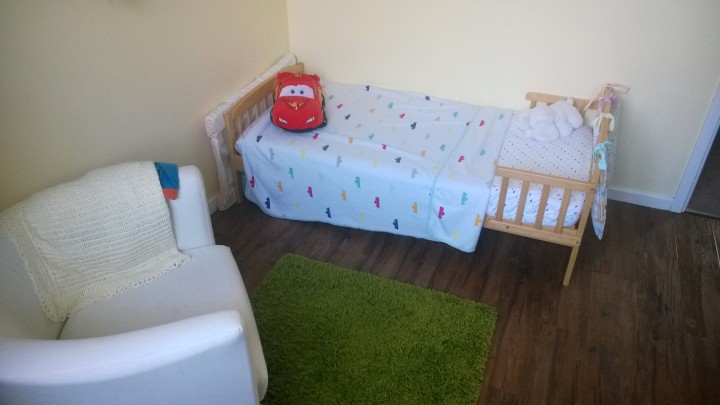 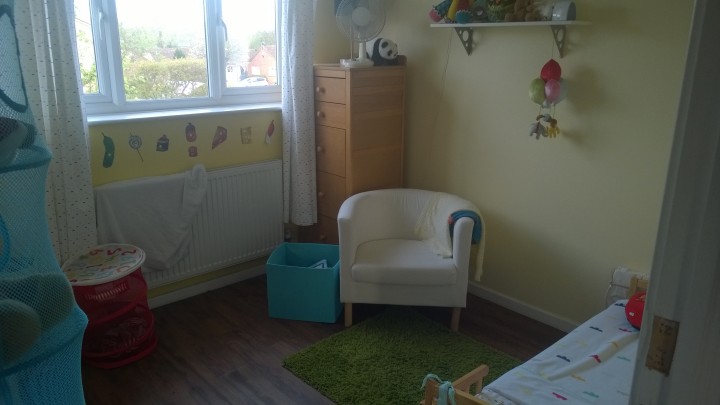 Anyway, we had talked about how best to go about it should things not go smoothly and he not stay in bed. I always liked watching Supernanny on TV and while I don’t agree 100% with everything she says, I do like her common sense approach to things, so we have Jo Frost’s book on Confident Toddler Care and looked to see what her advice was. We ended up using her stay in bed technique.

We felt this was definitely worth a try, so hubby took him for bath and bed as normal. Monkey was really excited about his bed being in the place of his cot as soon as he got upstairs, and didn’t even want his bath! Very unusual but we wanted to use his excitement if we could. Hubby did at all as planned and followed the technique to the letter, and you know what, it worked amazingly!

Monkey got out of bed 5 times, then resigned himself to it and stayed put, and stayed put all night long! He can be seriously stubborn sometimes so this really did surprise us! He even slept in a little late in the morning, bonus! We were concerned nap times may suffer, but nope the next day he went straight down for his nap and slept really well!! Hooray!!! The same happened that night.

In hindsight, we probably “should”/could have done it cold turkey, but in the end this worked so well I think because of the preparation and I think the technique really helped too. Either way all is well that ends well and our little boy is growing up! Bless him!

So, while this was a very special event, it will now be a very ordinary moment, a real sign he is not our little baby any more!