Little Monkey and I have quite a busy little routine these days. Every weekday morning he and I go for a walk with my neighbour and her little boy. Then home for a snack at 10 before we head out at around 10:30. Mondays we visit Nanny (and Grandpops if he is off shift), Tuesdays is Tumbletots, Wednesday is Music for Little People, Thursday is meeting my friends with kiddies, Friday is round to Grandma & Granddad. Sometimes this includes lunch out, other times we come home for lunch and then have playtime before his nap. He sleeps for a good couple of hours then its some calm playtime late afternoon before daddy comes home and we have tea together.

Quite a busy routine but I am a planner and like to know what we are going to do each day, helps me to stay a sane stay at home mummy!Most of the day is very active and we are out and about a lot. Even calm playtime in the late afternoon is often taking a little wander somewhere (never very far) or playing in the garden sandpit. Other times though, if it is wet out or if I think he just needs a bit of calmer time, we play inside and this is a couple of the things we have got up to lately.

Homemade Play-doh
There’s lots of recipes out there for home made play-doh, but I wanted to go for one tried and tested, so my mother in law gave me the recipe she used when hubby and his brothers were little. It worked then and works brilliantly now too 🙂 It’s measured in cups, which I don’t have, so I googled the approx. weights as well and sed those and it turned out great.

Put all of the ingredients in a pan  (My mother in law’s tip was to make the play-doh without food colouring and then break it into 4 and mix in the food colouring by hand. You’d get messy hands of course but 4 different colours of play-doh rather than 1, but I forgot to do this, oops!) turn on the heat and stir continuously until it solidifies.

It is really weird to do and actually at one point I was convinced that I had done something wrong as it was really hard to stir anymore but didn’t seem to solidify. I stopped to take a quick pic of this mess and then realised it was solidifying at the edges (where it was touching the hot pan), quickly stirred some more and hey presto it was solid! Should apparently last for ages as long as you keep it in an airtight container. 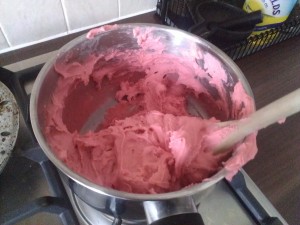 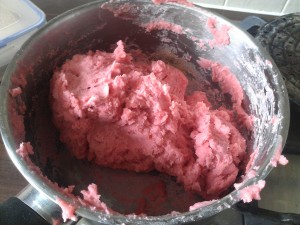 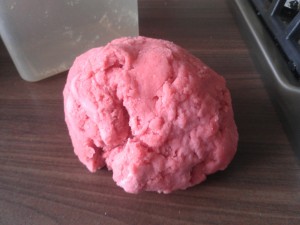 Later that day I got it out and as with anything that feels a bit funny, monkey was really not sure to start with. He was happy just playing with the cookie cutters I had got out to make shapes with it (must get some plastic ones I know). Anyway I decided to sit and play with it anyway and made a couple of shapes for him and gradually he got a bit braver with it and started prodding it about a bit but his face says it all really! He has played with it a little more since then but he’s still not really sure of it! He was like that with sand though initially, which he now loves playing with, so we shall see! 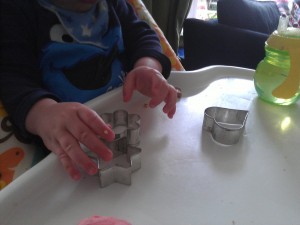 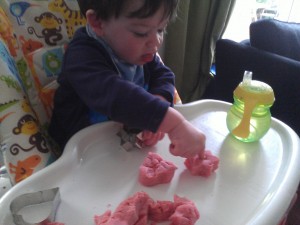 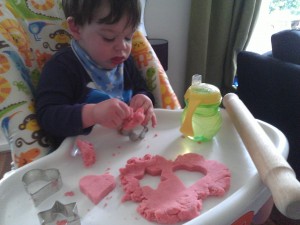 I’ve read quite a few other blogs and seen on pinterest other mummies playing with dried pasta/rice/lentils/beans etc. for pouring and sorting play etc. but never really got round to trying it out. One rainy afternoon I decided to give it a go and got out all manner of bowls, jugs, trays, spoons etc and some leftover pasta that had been open a while (it was at the back of the cupboard and a new pack had been opened in the meantime, oops). My lounge floor needed a hoover anyway (though with a one year old, when doesn’t it?:)) so we sat on the floor playing around with the pasta. It was great fun, it went everywhere, numerous times. He was really happy moving it from one container to another and banging about with the spoons and tipping them out. He was concentrating on it so hard bless him and very cute to watch as he needed minimal input from mummy (great to encourage some independent play!). It was great fun and the pasta is being kept for another rainy afternoon for some very easy and fun playtime :). 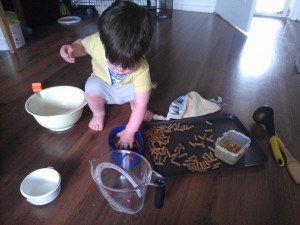 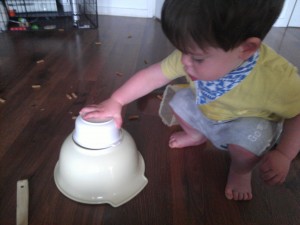 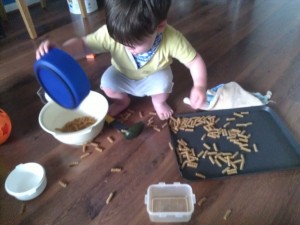 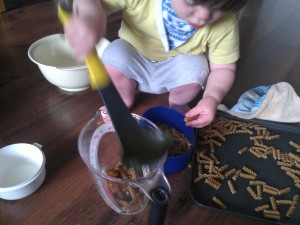 Very unstructured play here but really lovely. I have found that if I lie on the floor, it could be anywhere, on the grass, in our bedroom, in the lounge, then Monkey cannot resist running over and diving onto me for a cuddle and tickle. I’m not sure how he’s learnt this, have obviously encouraged it somewhere along the line but it’s brilliant fun for both monkey and mummy! He can be pottering about on the other side of the room/garden but when he sees that mummy is lying down he gets a huge grin and comes trotting over to launch himself onto my head/tummy/whatever is nearest, where he of course gets lots of tickles and kisses. It’s so cute and so much fun that I thought I would share it. It’s a lovely little break from busy active days and nice bonding between the two of us. For some reason his cheeks are particularly ticklish at the moment and if I just do a sort of cutchie-coo on his cheeks then he giggles like you wouldn’t believe, and honestly, isn’t your child’s giggles just the best noise on the whole world??