I’m trying to give approximate ages on blogs of things to do with  the monkey, in case anybody wants to give something a try too. With this one I’ve said 10 months because that is how old he is right now but in truth we have been doing musical play in one form or another since he was quite a bit younger, and I’m sure we will as he gets older too!

Music is one of Monkey’s favourite things, I think that babies have a natural rhythm and that definitely seems to be true with our little one. He is such a little bopper! The slightest little tune and he bounces up and down and shakes his head from side to side, and sometimes forward as if he is headbanging! Little rocker baby 🙂 Because he loves tunes so much I have been introducing ‘instruments’ to him.

First of all, let’s make it clear that I have nooo musical ability whatsoever. Zero. In fact, hubby laughs at me because when singing along with a song I will go in and out of tune and have no idea that I am doing it. I certainly can’t tell when I’m in tune! Though when I am really out of tune I do occasionally cringe at myself! My whole family is like this, my mum was told to mime as a child when singing in church or at school (different times hey?) and my brothers are as bad as me. We all love to sing, we just sound awful hehe. Hubby on the other hand is very musical, as is his family, so that must be where monkey gets it. Sorry, enough of the family history!

As I said, monkey likes noise, and definitely likes making noise! Banging things together in particular. One day a couple of months ago, at a sensory play session at a local centre he located some little musical shaker toys and he absolutely loved them. I tried to find them online and sadly couldn’t find them anywhere but it prompted me to try and make some of my own. Very simply, I used a couple of empty plastic drinks bottles with some dried lentils and rice and oui, là! I have seen other mummies online who put masking tape around the lids to make them stay on, but in honesty I haven’t done that yet as with Monkey I think he would be more tempted to try and peel off the tape than take off the lid. We’ve been using them for a few months now and so far no lids have been removed. 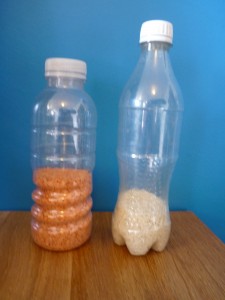 He does like shaking these a lot, and has got more interested in doing so recently than when I did them initially. Anyway, on an unrelated trip to the shops I stumbled across the very shakers that Monkey had played with in the play session! Fantastic! (Early Learning Centre/Mothercare if you would like them) 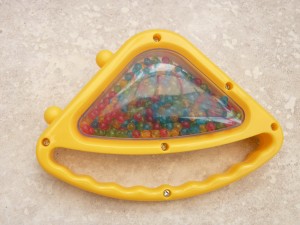 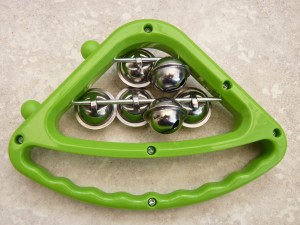 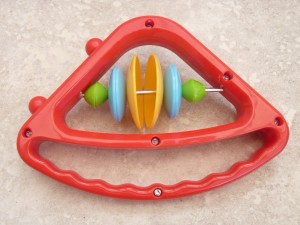 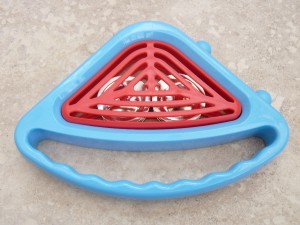 He loves them! They get shaken and banged around all over the place, cue some very big grins! 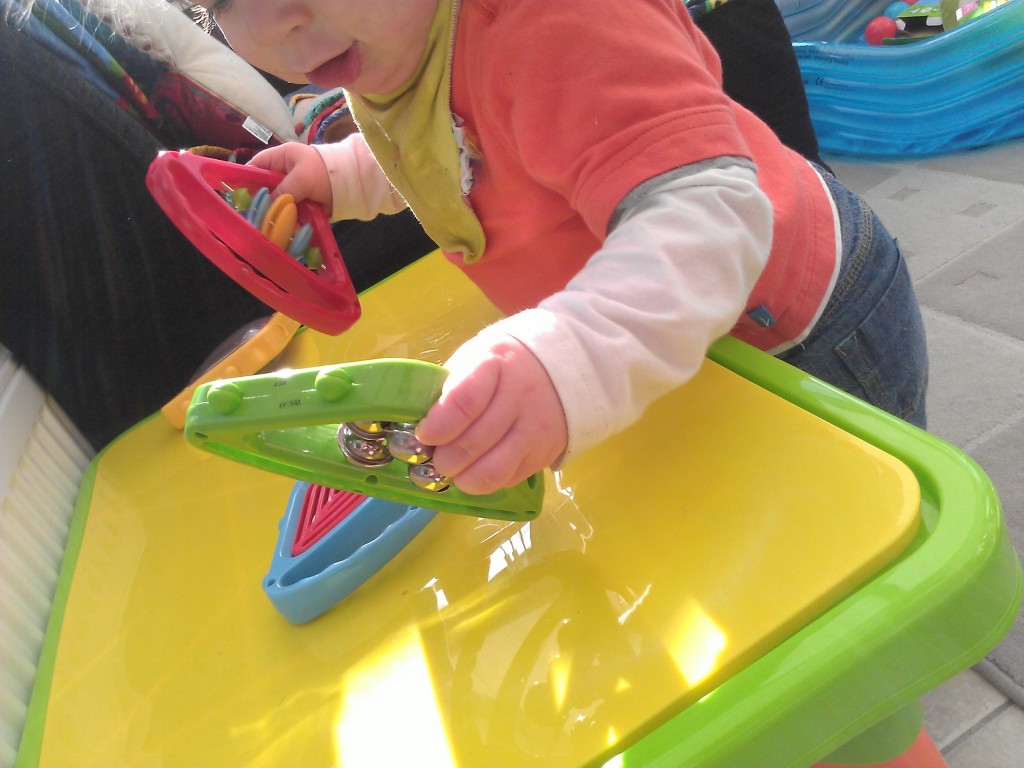 They also connect together to produce some interesting sounds, but that’s a bit heavy for monkey at the moment. 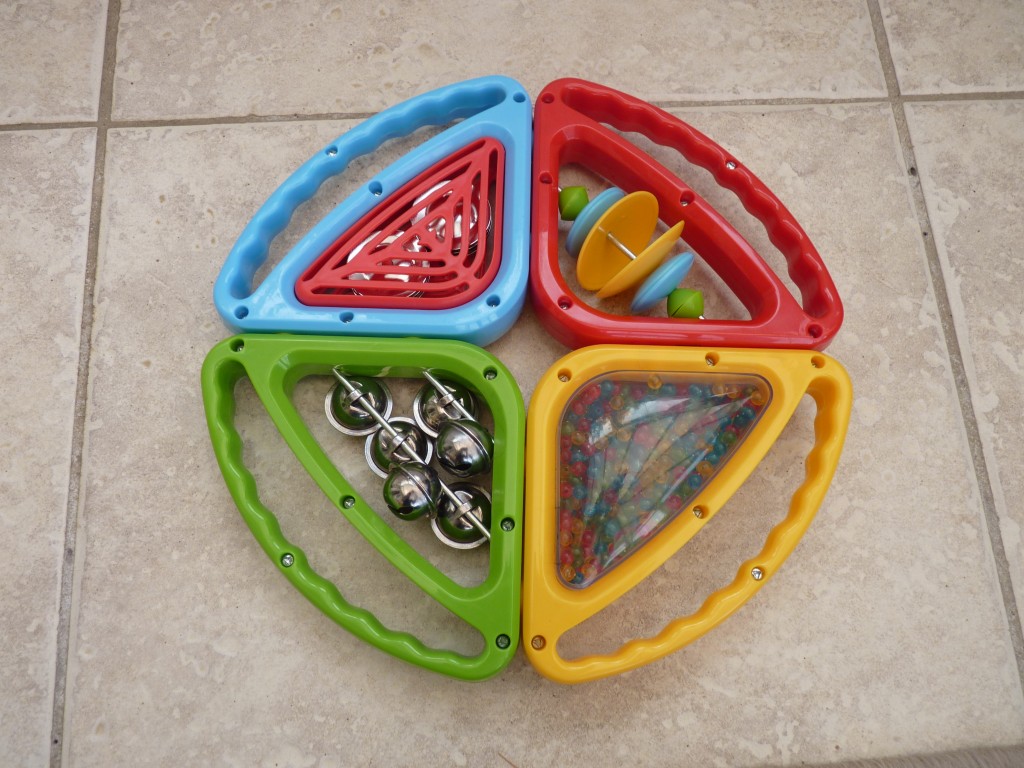 Before we met, hubby had bought an upright piano on ebay for £5o with the idea that he would learn to play properly. Since we met though it has barely been used and in our new house has been sat in the conservatory, pretty much untouched. During one of our musical play sessions I decided to give it a try with monkey, and thankfully it wasn’t quite as out of tune as I thought it would be! He took a little warming up, very clingy with me initially at the unfamiliar sounds, but we persevered over a few days and now he loves it! When he is sat playing in his little ball pool and one of us plays a tune (hubby has taught me twinkle twinkle little star, Oh when the saints and Mary had a little lamb, all of which can be played with one hand thankfully!) he will sit and bob and give the loveliest smiles. But more often than not as soon as we go into the conservatory for a bit of musical play he is chomping at the bit to get up on our knees and have a bash at the keys himself, it’s so cute. Who knows, maybe we have a budding pianist in our midst hehe. 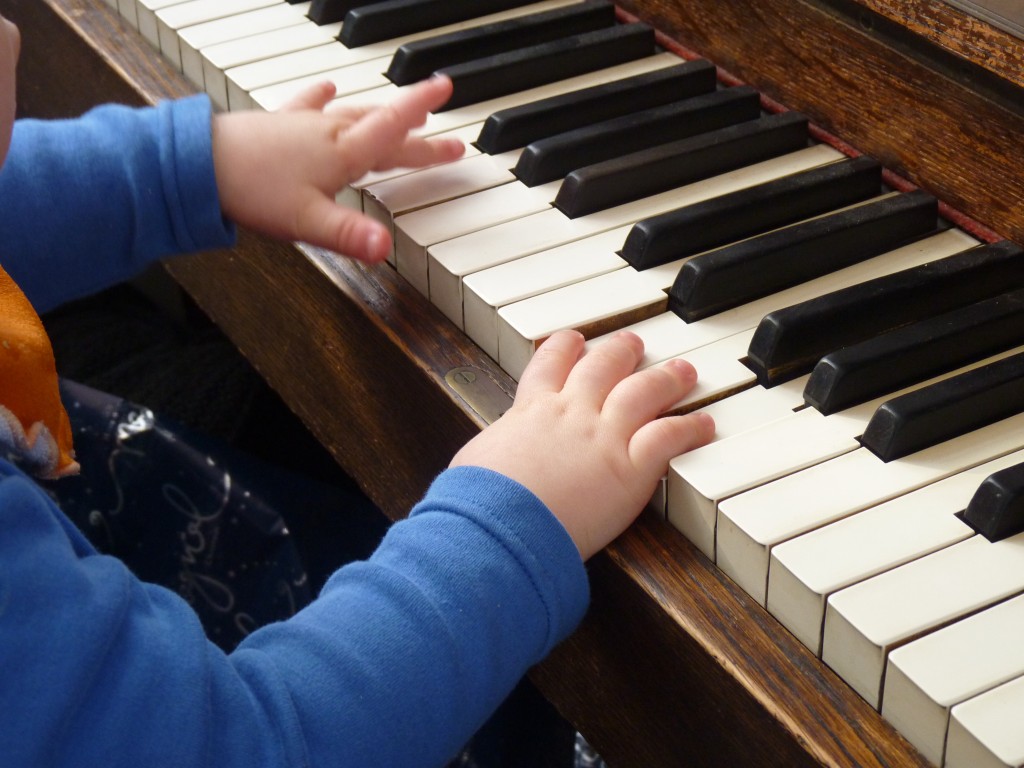 There are also many unconventional ‘instruments’ that Monkey loves to ‘play.’ Empty cereal boxes are good for banging. The plastic pump for my gym ball is a brilliant drum and he likes the funny noise the plastic pipe for the pump makes too. 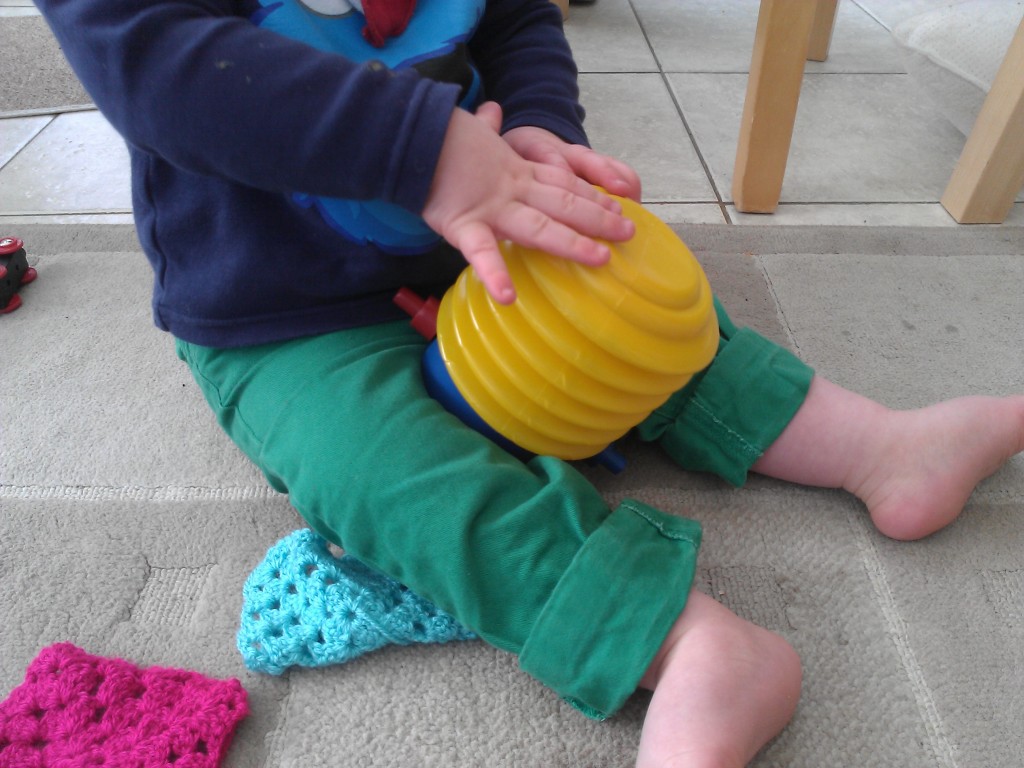 Our little measuring spoons make a wonderful jangling noise and randomly he loves the noise of banging the radiator (it is not turned on!). Particularly using any of the above instruments to bang on the radiator! 🙂 He was standing at his little cupboard in his bedroom banging it open and closed and I realised he was bopping to that too! Seriously this kid has some rhythm! 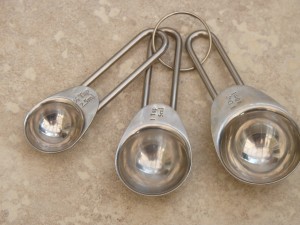 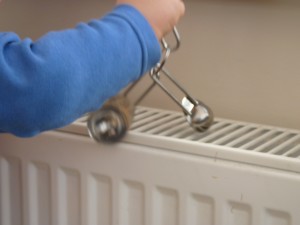 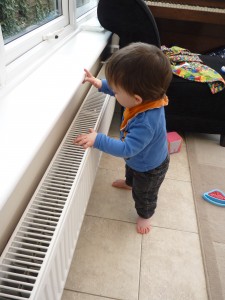 I guess my point with this is that though I found some little instruments to buy quite cheaply, you don’t really need to spend money on expensive toys to do this kind of play. Watching monkey learn you can really see things in a new light again and it’s lovely to see him discovering what noises he can make with different things and how he can play with household objects (with supervision of course) and enjoy them as much as expensive toys. Hmmmm gives me an idea for a future post!