It was half term this week so our baby classes weren’t on, and I had to find other ways of entertaining the monkey. Add to that it was cold, miserable and pouring with rain a lot of the time, so I had to be really inventive as he gets so bored of being at home for too long! Again I like to put the age of the monkey to help people search, I find on some blogs that I don’t know how old their little ones are and so while you can tell a bit whether it’s suitable, you’re not always sure what age is right to try it. So anyway, Monkey is 1, or 12 months if you prefer it that way 🙂

We did get out and about a bit, lots of walks and luckily there are some nice play areas locally to go to and blow off steam. But one day in particular was just miserable so we only got one walk in the morning and then were inside basically all day. Now I like to get out and do things with monkey as much as possible, the prospect of staying at home with him all day makes me a bit anxious as I know I will need to entertain him, and, well I am a planner and am not great with the totally unknown! Getting out and about a lot is my way of staying sane. Obviously he has playtime at home but he does like seeing the world and things.

So anyway I came up with a few ideas for this week, one just being a bit more musical play and the other was to turn our office/spare room into a soft play area for a few days to give him some climbing, clambering practice in a safe environment.

The musical play went quite well, I got a music CD when we became a member of tumble tots which had a few songs, and we also did some of the music and actions that we do in our music class as he loves those (I did all the ones I could remember!) Monkey was very interested in the cd player though, normally we just play music through our phones or ipod so he was intrigued by our portable cd player and all the buttons and dials. He particularly liked the blue light coming from the display and the way it turned our hands blue when we put them in front of it. I didn’t mind him prodding and playing with it but when he decided that he would use the cd player as a drum, making the cd jump and skip, I felt it was time to move on! 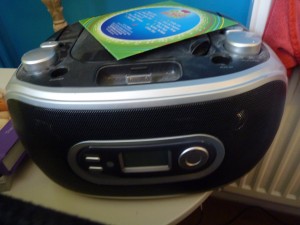 We also played with a lot of his instrument type toys, such as the homemade shakers, and he also got some piano type things for his birthday. At the music class we go to they are all in a big bucket in the middle of the room, so I copied that and out them all into one box for him to pick and choose from. He really enjoyed this, normally they are spread throughout the house as play is often unstructured, so seemed to really enjoy pulling them all out and having a play with all of them at once. 🙂 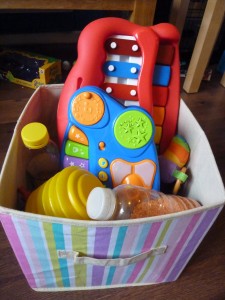 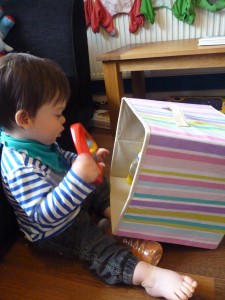 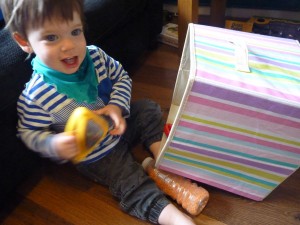 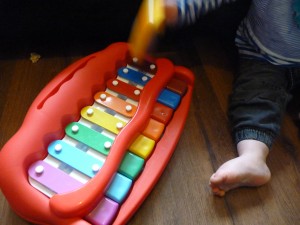 I gathered up basically every cushion, throw, duvet, pillow and quilt from the house. My mum is a quilter and works in a craft shop where they sell quilting materials and make loads of samples and teach classes. So we have loooooaads of quilts of various shapes, sizes and colours and they were perfect for today. I also got a few of his favourite soft toys in there. One of our friends, for his birthday, bought a very cool mat that makes sounds when you walk along it, and he finds this very funny so I decided that would be the entry to the room. (Apologies that the photos aren’t the best, had to use my phone for these ones!) 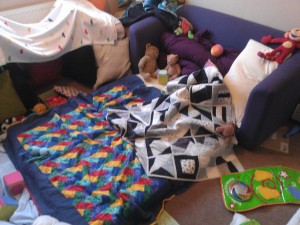 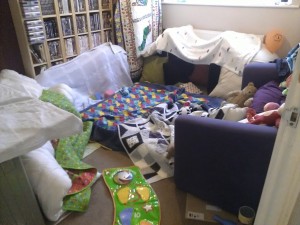 As soon as we walked into the room, Monkey found it hilarious. I had also opened out the old sofabed, which is basically just foam and so very soft and perfect for this. He’s used to playing in the office and often pulling out dvds from the racks (we are trying very hard to teach him to put them back, but that’s another story) so seeing the room set up completely differently was really amusing for him. I think I’ve mentioned before but he’s never been much of a crawler so he got annoyed at points that he couldn’t walk very easily over some of the soft things, but I think it’s good for him and once he realised that falling over was funny he was loving it. 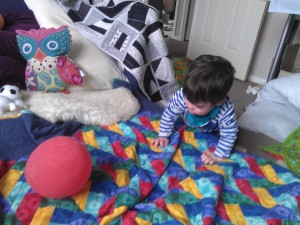 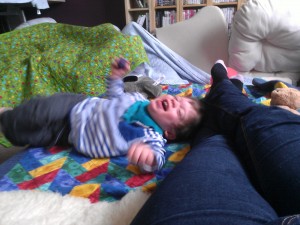 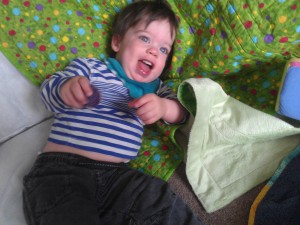 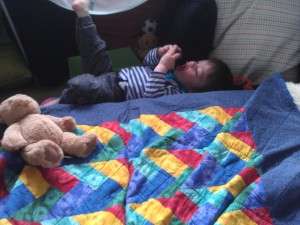 I’d also made a mini den by hanging his favourite blanket over 2 chairs and he found it so funny when mummy was hiding in there! He soon clambered his way over to join me in there! Another thing which we have been doing is putting a random selection of toys and things into a box for him to find. So in the soft play room I filled it with ribbons and things out of my craft box (mainly left over from our wedding, so very colourful) and a couple of wicker ball things that were on the floral displays at our wedding. He wasn’t interested in the ribbons but carried the wicker ball around with him for ages. 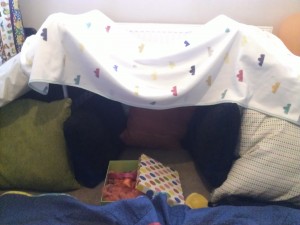 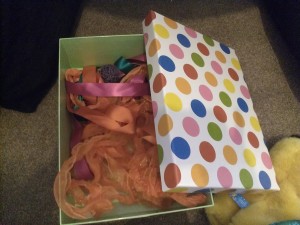 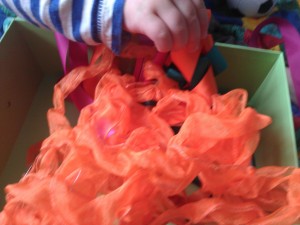 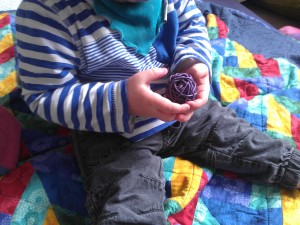 In the end I had to put the sofabed back up and give him some room to walk about as he was getting annoyed but other than that we have left the soft play room set up and have been in there a few times this week as he has really enjoyed himself in there!

I’ve also introduced crayons recently, not sure what age is best to do that really and when I tried before he was not interested. This time however I did get him to do a bit of scribbling, though I had to stop him trying to eat the crayons a few times, but mainly he was just interested in trying to take the crayons out of the tub and put them back in, one of his favourite things to do at the moment. Maybe next time I will just give him one crayon at a time to scribble with? 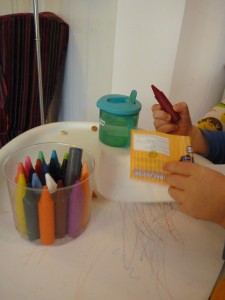 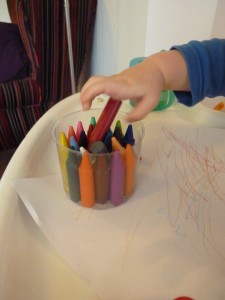 Anyway, the sun finally came out at the end of the week and we have been back out exploring and playing in the water table and paddling pool, which is great fun 🙂 Hopefully the nice weather will continue!