I’m not a natural runner. I was rubbish in PE and I like my food. I’ve openly laughed at runners in the past, thought they were potty and that that would never be me. But I’ve just run 20mins straight for the first time in my life, and no I wasn’t being chased! I chose to do this and I am actually enjoying it. Here’s the beginning of my story.

I’ve really struggled with my weight since LM was born. I’ve stopped writing about it because I haven’t managed to stick to anything. I’ve gone back and forth between dieting and convincing myself that this time I was going to do it, to saying I wasn’t going to diet because I don’t want my kids to see me obsessing about food so I was going to concentrate on exercise instead. But my swimming petered out, and I had to stop the Zumba dvd because it was giving me niggly pains in my hips and back (presumably left over from all those pelvis and back issues in pregnancy and generally just having no strength in my muscles). So what to do?

I still felt unhappy about my size but didn’t want to keep moaning on about it. Dieting wasn’t working as so much of our social life revolved around food and I am clearly weak willed. I thought about starting running, but I am really not a natural runner. I tried for a bit with a friend when Monkey was little but only half heartedly. I constantly came up with excuses not to go and then when I got pregnant with LM that was the end of it.

As the weather started warming up though I thought about trying again. For one thing, it is free. I have trainers already (that I’ve had for over 10 years and have only seen sporadic use, I’m ashamed to say) and I could just go. I don’t have to drive anywhere first as there are lots of places around that I can run. I mentioned the idea to one of my sister in laws, the lovely Fran, and we decided to go together. Fran works different shifts so we were a bit intermittent but we did it, we started. There was lots of walking interspersed with running but we were slowly improving. It was also nice to catch up, have a natter or a vent, and to encourage each other. It was great when we could do it together, the problem was when Fran was working and I tried to go on my own to my own. Then I just felt utterly useless.

I would still try but it was so hard to motivate myself. I felt horribly embarrassed if I had to go past someone and felt I must look so stupid, with my flab wobbling everywhere and being so out of breath after only a few seconds. I would try and keep running until they were out of sight then stop, gasping and panting and coughing and feeling useless. When no one was around I would run for such short distances as my legs felt like lead and the negative little voice in my head kept telling me to stop. I felt so deflated and negative and we on the verge of giving up, but I really didn’t want to. I thought about the couch to 5k type thing but didn’t know much about it. A friend then suggested I try it after I shared how useless I felt with my running and I decided it was worth giving it a try.

There are loads of apps and plans out there all called the couch to 5k but I decided to go with the NHS version. I downloaded the podcasts and went for it. It starts off so slowly and because of the bits of running I had done with Fran, I was able to do the first runs quite easily. I felt so positive after that first run, even on my own and I really enjoyed it. Hurrah!

I persuaded Fran to follow it with me for our run that week and also continued the plan on my own when she couldnt join me. Our holiday was coming up but I was determined not to stop, and to stick to the plan while I was away. I managed 5 runs across the couple of weeks I was away and was sending texts to Fran while I was away to motivate us both as she was running at home when she could too.

“just been for run no. 2 and actually pushed it a bit at the end and ran for over 2 mins solid, helped that it was downhill but still it felt good.” 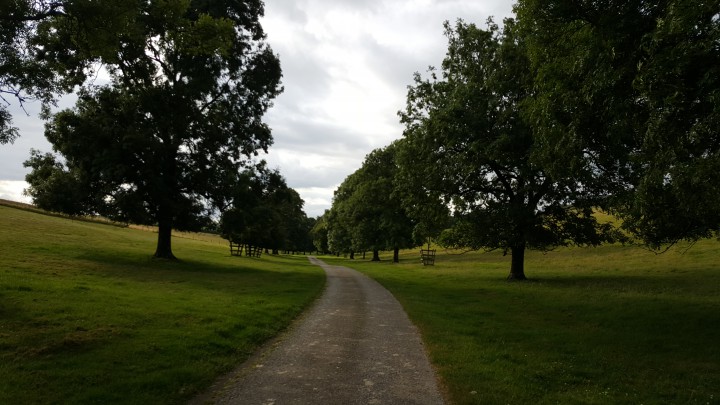 “So I was supposed to run yesterday but didn’t fancy the downpour! Was really hard to motivate myself today as still chilly and damp but I did it and ran for over 3 1/2 mins solid on my last leg, wahoo!” 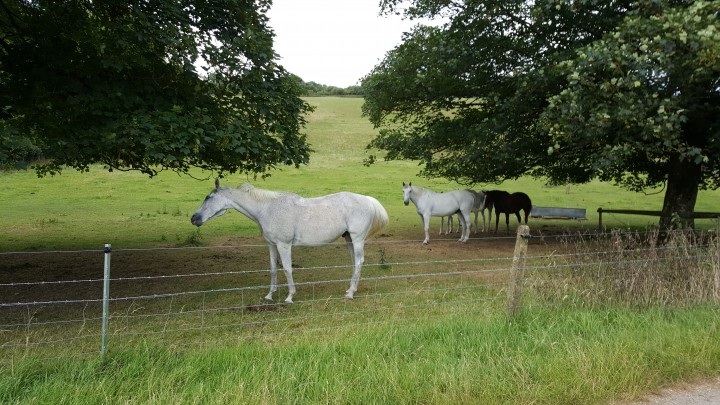 Running there was great and it was through such beautiful countryside, I absolutely loved it. Most of the start of my run was uphill but the way back was downhill which definitely helped. So much so that although I completed week 3 when we were down there I did another run of week 3 when we got home before moving on to week 4 to make sure I could hack it without a big downhill stretch. I managed it and so felt really good despite not losing any weight on holiday. In fact I put weight on which was a bit disappointing but figured that was due to the amount that we ate while we were away. Still, I wanted to keep going at home and try and eat a bit healthier too. I wasn’t going to let it stop me. I was looking forward to Fran being able to join me agai but while we were away she fell and sprained her ankle. She wasn’t going to be running anytime soon but I knew I just had to keep going. Excuse the language but here is another text I sent once we were home

“F**k me, just done the first run of week 4, 16 mins running in total. A 3 min, a 5 min, another 3 and another 5. Was really nervous but I did it! Bit knackered but after the warm down walk actually not feeling as bad as I thought I might! Xx”

I still had days where my legs felt like lead and I felt so tired. I realised that in my eagerness I was running every other day and had done so for over a week. The plan is to run 3 times a week with at least 1 days rest in between, but I was getting up to 4 runs a week, so I decided to have a couple of days off. It did me good as week 5 was a real step up. 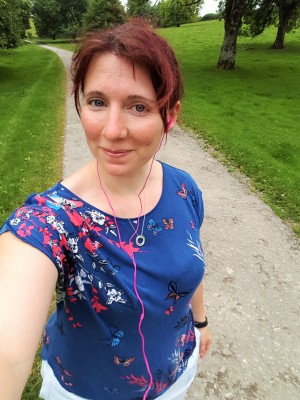 Me on a run in my dodgy running gear!

I went from running for 3 mins to running 5 mins, to running for 8 mins, which I was so nervous about but then so proud when I managed it. Annoyingly though, the podcast cut off during the second 8 min run for some random reason and it really affected my rhythm. I tried to keep going and check the time on my phone but it was really hard. Those negative voices in my head came back, telling me my legs were tired and that I couldn’t do it… and I tailed off just after 6 minutes. It’s amazing how my fitness has come on and now my buggest hurdle is, as they say on the podcast, mental rather than physical.

Instead of focussing on the negative I reminded myself that a run is a run and it’s still good for me. It isn’t all about hitting the targets. They are a good motivation but not the reason I am doing it. I have come so so far since I started. I feel substantially fitter and I have had a few comments about looking a little slimmer which is nice. Unfortunately the scales aren’t showing this, but hopefully my muscles are growing as I burn fat and that is keeping my weight the same? No idea on the science of it but I am clinging to that as I am trying so hard to eat healthily and am running 3 times a week. I do feel slimmer too. 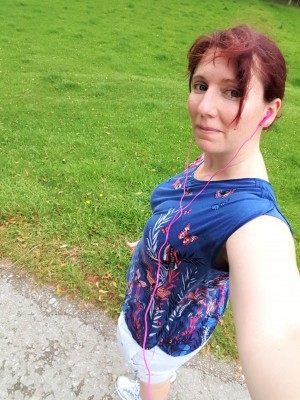 The last run in week 5 was the one I was most nervous about, running for 20 minutes straight. Surely not! Already? But I decided I just had to go for it, and actually, surprisingly, it was easier than I thought. I think with the shorter runs I am constantly thinking about when I am going to stop, but with this I knew I just had to keep going, so after the first few mins (I always find the first few mins the hardest) I just kept going. It was hard, don’t get me wrong, but it also felt awesome that I was able to do it.

I actually felt like a real runner, for the first time. Not just some daft fatty making a fool of herself which is how I felt in the early days. I honestly never thought running would be the right exercise for me, but I think it just might be. I may also buy some better running clothes as so far I have been running predominantly in a pair of hubs old shorts that are covered in paint from decorating and whatever top I am wearing that day haha.

Are you a runner? Have you ever tried the couch to 5k programme?