I wrote this post a while ago as it was intended to be a guest post on another blog, however the blogger actually stopped blogging so it was never published! It never really felt relevant to my blog before so it has sat, a little neglected and unpublished for a while. Now though, at over half-way through my second pregnancy I have been talking about birth choices and breastfeeding a bit more so decided to dust it off and publish it 🙂

So here it is, my breastfeeding journey with Monkey. It doesn’t sound at all positive to begin with, but bear with me as it does have a happy ending and I will try to breastfeed my second child too.

We had a rocky start and unfortunately a lot of the ‘help’ we received turned out to be more of a hindrance. I always knew I wanted to breastfeed if I could and that I would try really hard to do so. I also realised that it wasn’t necessarily going to be easy, but I didn’t realise quite how challenging it would be. Once breastfeeding is established, it is wonderful and pain-free, but I was not prepared for how difficult it could be to get to that point and it never occurred to me that asking for help would leave me feeling lost and confused.

Before Monkey was born I read a lot about breastfeeding but I thought that it wasn’t really something you could learn until you did it. We went to a breastfeeding workshop at our local hospital and while it was quite helpful and informative, it was also my first glimpse at the pressurised attitude towards breastfeeding. I made the mistake of disagreeing with the expert at one point and I was quickly under fire until I reluctantly agreed with her (I hate confrontation at the best of times, let alone when being singled out amongst a group of strangers). I wasn’t too keen on her approach but despite this we came away feeling fairly confident and hopeful that I should be able to breastfeed with relative ease. 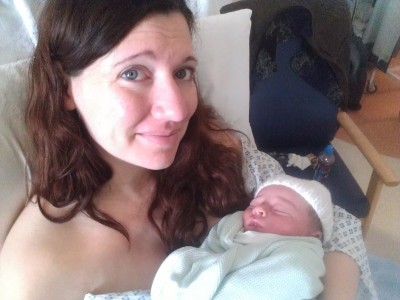 Monkey was born by C-Section as he was breech and even though we had skin to skin as soon as possible after he was born, we struggled to get a good latch. We saw various midwives and breastfeeding experts that day, all with completely different opinions. It was a really difficult day and my boobs were grabbed, prodded, pushed and squeezed into his mouth. Every midwife seemed to have a different idea of which hold was best and whether to hold his neck or his head and it was all so confusing. I dreaded the moment that hubby had to go home for the night because I would have to deal with everything on my own. 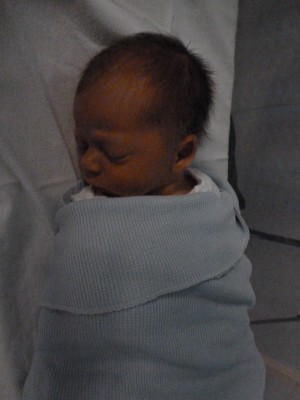 A rare sleepy moment for Monkey that night

But the time came and it was one of the worst nights I have experienced. Being on my own, in pain from the C-section, barely able to move myself let alone lift my baby, struggling to get him to eat or sleep. With 3 other mums in the same position on the ward, there was always at least one of the babies crying. At one point, with tears streaming down my face and a baby I couldn’t manage to feed who was crying his eyes out too, I finally called for help. A young midwife came and stood looking at me then asked ‘Well? What do you want me to do about it?’ I couldn’t believe it and sobbed out, ‘please just help me try.’ She did soften then and tried to help, and I know they are very busy, under a lot of pressure and deal with the same thing day in day out but she made me feel so pathetic and judged. I really felt like she couldn’t care less. In contrast there was another midwife on the night shift who was really lovely and very helpful. It was just the luck of the draw as to who would come when you pushed the button.

Unfortunately feeding Monkey didn’t consistently improve whilst I was in hospital, and we continued to struggle. I ended up using a pump and was given a plastic syringe to feed him from. It was a bit of a nightmare but it seemed to be working. It wasn’t a permanent solution though and we continued to try and get a good latch. At the breastfeeding workshop we went to when I was pregnant we were told that if the latch is right then feeding won’t hurt, however whenever we could get Monkey to feed, I really found that it hurt. When I told a midwife this she laughed and said ‘well of course it hurts, what do you expect?’ We couldn’t believe that there was such contrasting opinions from ‘experts’ within the same hospital and just didn’t know what to believe or who to ask for help any more. 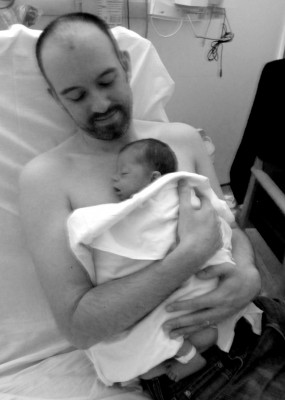 Daddy & Monkey in the hospital

By the time I was well enough to go home, I was desperate to, but because of the difficulties in feeding, we faced a lot of resistance and they really didn’t want us to leave. We were told by the head midwife that if we took him home and he didn’t eat then ‘you’ll never forgive yourselves.’ We were so shocked by the insinuation and  I understand that they have a responsibility and they don’t know us but even when we assured them that we were going to buy a pump and that we had cartons of formula ready in the event he wouldn’t breastfeed, they still wouldn’t let us go home.

Thankfully my wonderful and supportive community midwife happened to be in the hospital that day, heard about our predicament, popped by and saved the day with some inside information. She ‘suggested’ that we could ask the midwives for a bottle to put my pumped milk in (rather than the syringe they had given us), as if monkey drank from the bottle then we may be able to convince them to let us go home. Because I was expressing so well and Monkey ate well from the bottle we were finally able to persuade them to let us leave.

Being at home was just so much more relaxed that things soon improved. We decided, despite previously being told we didn’t need them, that it was worth trying some nipple shields. My nipples although not completely flat or inverted, were very small, compared to the shape and size they became after breastfeeding, I honestly believe this played a part in Monkey being able to latch on properly. We were told this was not the case, and I am no expert, but, well sometimes you have to trust your instincts, although this is by no means easy as a new mum! I also think that may be why it hurt me initially as my nipples were being stretched into the right proportions (sorry if too much info!).

We also researched online and found some clear advice about feeding positions. In hospital we were advised to hold Monkey’s head while feeding, but had the problem that he was constantly turning away when we tried to feed him. It seemed from our research that we were confusing him about which direction to feed from. By holding him so his head rested in the crook of my arm rather than being held in place, it seemed to just work.  These two seemingly small changes made a huge difference and Monkey was soon feeding with ease.

At the midwife’s home visit she wrote that we were breastfeeding well, and Monkey soon regained his birth weight. In fact he started piling on the pounds and quickly jumped up two lines on the percentile chart. It wasn’t always plain sailing but a few weeks later we stopped using the nipple shields and had no further worries. I soon came to love breastfeeding (even despite 3 bouts of rather painful Mastitis) and the bonding experience that came with it and breastfed for over 6 months until the time felt right to stop. 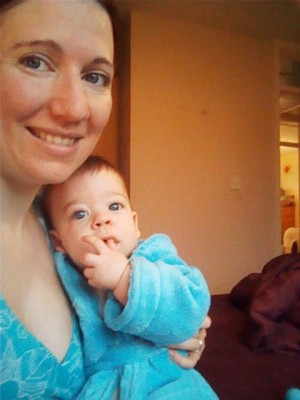 Me and my Monkey a few months later 🙂

I feel really sad as I write this that my first few days of motherhood, instead of being filled with joy, were spent largely in tears and feeling more judged than I ever have in my life. Of course there were happy times too. I was brimming over with love for Monkey and was so happy he had arrived safely. I just wish things had been different regarding breastfeeding. It seems so sad that there is now so much pressure on women to breastfeed that the approach has become so harsh and almost forceful. That the midwives, nurses and breastfeeding experts aren’t just able to offer support and encouragement or at least be consistent, and that as women we are made to feel like we are failing our child if we cannot breastfeed for one reason or another.

Prior to Monkey’s birth we were led to believe that breastfeeding was easy and pain free, and it really is, once breastfeeding is established. But not to start with.  It may be for some of course, everyone experiences it differently, but certainly not in my case. I suppose that because everyone has different experiences that the midwives and experts are inevitably going to have different opinions about it, I just wish it wasn’t such a confusing and sometimes belittling experience as a new mum.

If you are thinking about breastfeeding then please don’t be put off by my experience as it is different for everyone. In complete contrast a good friend of mine credits her successful breastfeeding completely to the help she received by staying in hospital for a few days after her daughter was born. Unfortunately it really is the luck of the draw but if you do struggle initially, know that you are not alone, and know that if you can persevere through the difficult days in the beginning, that it does get better and that it really is worth it in the long run.

I will definitely attempt to breastfeed again with our new baba, but I know that every baby is different and I am going to try really hard not to put too much pressure on myself if we are struggling with it. We’ll see how I get on with that though ;).

Did anyone else have a similar experience? I would also love to hear about positive experiences!! 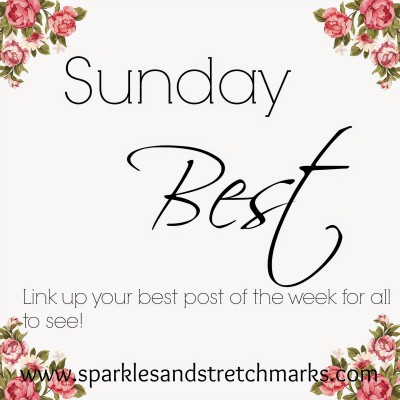 73 thoughts on “My Breastfeeding journey with Monkey”