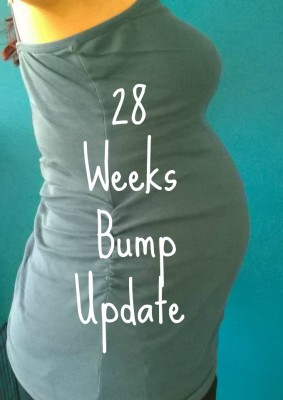 Today I am 28 weeks pregnant which means I am now officially into my third trimester! No wonder I have been feeling so tired ;). I can’t believe how much faster this pregnancy is going, she is going to be here before we know it! Yipes!

So what’s been going on? Well I saw the midwife today and my bump is measuring bang on for 28 weeks, so that’s good. I also had my whooping cough vaccination, which is a new thing as I didn’t have it when I was pregnant with Monkey. Unfortunately it seems that whooping cough has come back a bit recently and there have been deaths, so it the vaccination is now offered to all pregnant women when they are 28 weeks +pregnant. What I didn’t realise was that they don’t give you the whooping cough on it’s own, but it comes with Diphtheria and Tetanus vaccinations in the same jab.

Jabs in general can make you feel a little poorly and give you a sore arm, but apparently I have a slightly higher risk for a very sore arm, because of the Tetanus part of the jab. I have  already had 5 Tetanus vaccines in the past, which is the maximum amount you need in your life. Because my body doesn’t  need any more of the Tetanus vaccine it apparently secretes the rest through my muscle and therefore can make my arm sorer than normal. So far it seems ok, it’s a bit stiff and sore but not too bad, we shall see how the pain goes over the next couple of days!!

Our little girl is a real wriggler and gives me lots of lovely kicks throughout the day, which I think is one of the nicest things about pregnancy. It is very weird to think about a tiny human growing inside you but it’s lovely to get the constant reminders that she is ok in there! It’s a bit odd at the moment though, because of my bicornuate uterus I generally only ever feel her on my left side, with just a few kicks lower down on the right side, with her head very much up by my ribs on the left. Lately though I have been feeling the odd big movement or kick about midway up my right. not all the way over on my side but further right than I have ever felt before (Monkey was on my left throughout).

I’m not sure what this means, whether second time around my uterus is just more flexible in general and so she can get further over as the pregnancy goes. I am seeing it as a glimmer of hope though that she may possibly have enough room to turn around – which would mean that I get to have the VBaC that I hope for. I don’t want to get my hopes up for this yet though as just because she can move more than Monkey did won’t necessarily mean that she will be able to move enough to get in the head down position when the time comes. I don’t believe she has been head down yet, she seems to be breech or potentially transverse occasionally. I could be wrong but I don’t think I have felt any foot kicks higher up! I know some people think I am bonkers for wanting to experience a natural birth if I can, and I know there is nothing wrong with having a C-Section (I will be fine with having one if she stays breech or the consultant recommends it) but I would like to try for a natural birth if I can.

What else is going on? Well I am easily tired these days, we had a fab visit from friends at the weekend and it was wonderful to see them but I was completely exhausted by Sunday! I napped for 3 hours in the afternoon (very unusual for me to ever sleep in the day) and I was still shattered when I woke up, and on Monday too tbh! Amazing how your pregnant body just can’t handle things the way that you would normally!

SPD-wise I am doing ok. It’s not wonderful but it is manageable at the moment. After a really painful few weeks I am relieved that it doesn’t seem to just be getting worse. I still have to be really careful about how I sit and lie as if I move my legs too far apart, or put too much pressure on one leg then I do get shooting pains in the front of my pelvis. I also need to wear my support whenever I am walking for any length of time, just for added support! But I am not shuffling to the extent I was in my first pregnancy and I am not in constant agony, which is a huge relief. I do believe my Aqua-natal Yoga is helping, along with the regular physio. Fingers crossed I won’t need to end up on crutches again!

I seem to be doing pretty well stretch mark wise this time round. I got loads last time, not really on my actual bump weirdly enough, but my hips, thighs and boobs were absolutely covered in them! So far though I don’t seem to have any new ones. I’m not sure why, I was bigger last time around so it may be that my skin isn’t stretching as much this time (as it already got stretched so far last time) or it could just be that my body isn’t reacting so adversely to my hormones as it did first time around. Who knows!! I have been using the Sanctuary Spa Stretch Mark Oil this time around, slathering it all over whenever I remember (maybe once a week) so that may be helping? Difficult to tell though isn’t it? I know there is still plenty of time for some to appear, but I definitely had them by this point last time.

I am definitely expanding a lot at the moment though. It’s funny as I don’t feel that big (and actually randomly forgot I was pregnant briefly on Friday, weird I know) but then I catch myself in the mirror or in a photo, and my arms and face are looking a bit chubbier. I also need to buy some new pants as my bottom seems to be expanding out of my current ones! Sorry if TMI! :).

I am struggling in other clothing areas and have been enjoying the slightly cooler weather lately, as I have been able to comfortably wear my jeans and long leggings again. All my summery shorter trousers and shorts are getting a bit small and I really don’t want to buy any more with only a few weeks of summer really left! I have plenty of bigger clothes from my last pregnancy, but they are not very summery. I will have to see what happens with the weather and see how I get on I guess!

I think that about covers everything for this update, back soon!