We have reached a bit of a milestone with our gorgeous boy. Not one you will find listed as a milestone in a baby book but a milestone  for us nonetheless. Monkey has always been, how do I say this nicely? Well, a bit clingy really. He has switched the clinginess between Mummy and Daddy but in general he has always wanted to be very close to one of us, pretty much at all times.

He just isn’t a child who will run off to play at a play area, or who is happy to be looked after by anyone else. He likes to know where Mummy and Daddy are, he wants us to be with him. The degree of this has fluctuated over time, and we have had periods of real separation anxiety, and periods where things have been a little easier, but the attachment has always been there. It is just a part of who he is.

Lately though, there have been some real signs of independence. Every Monday his Nanny & Pops take him out to rhyme time at the local library. All 3 of them love their time together and he has always enjoyed it… but until recently he has kicked up a bit of a fuss about leaving me at home. He’s been fine by the time they got to the end of the street, and even the end of the drive some days but there has been a few tears every time for a while.

The last few weeks though have been a lot better. Instead of getting upset, he has left with no fuss at all. He takes his Nanny’s hand and walks out the door. And as he goes.. he says “Bye Mummy.”

It is amazing how much I love those two little words and I am so proud of him, growing up and taking those first steps of independence. In many ways he is the same as ever and wants me with him at the play area, and likes to know where Mummy & Daddy are all the time, but it is still a big step in the right direction. 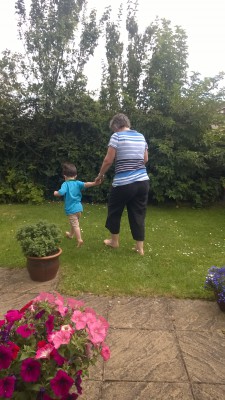