As regular readers will know, Monkey started playgroup in January. Other than a few blips he has settled in so well and we are hugely proud of him.This is a little boy who has always been quite clingy, he had very bad separation anxiety and alwyas wanted his Mummy there. At soft play or at the playpark I have long been the mum with a child clinging to her legs unless I am clambering up the slide with him. I have wondered in the past if it is my fault because I am a SAHM and wondered if a nursery setting would have been better for him, or worse!

My fears and worries have subsided over the past year as he has grown up a bit and become more and more independant. I was still very nervous of him starting playgroup and he was originally due to start in November when he turned 2 1/2. Becuase this coincided very much with LM being born we decided to defer it a couple of months and start after Christmas. As the date neared, although a little apprehensive, I was quietly confident as he seemed to grow up a lot in the few short months since his baby sister was born and get that little bit more independant, I guess he had to really!

For Christmas we got him a lovely book to help him get excited about starting playgroup and in the week or so before he started we read it over and over again. He loved it and was definitely excited to go. The book was great too as it explained about Mummy going away, and then coming back again.

The big day dawned and it went pretty well. He pulled a sad face as I left but didn’t scream or cling, Apparently he was very unhappy throughout the session and he did cry when we picked him up but that was to be expected and we were so proud of him. The second day was much like the first and although he wasn’t too bad when I left him, they did say he had again been quite upset throughout and he cried when I collected him. On the walk home he was quite positive and saying he loved playgroup so I was comforted by that and was just praying things would improve. 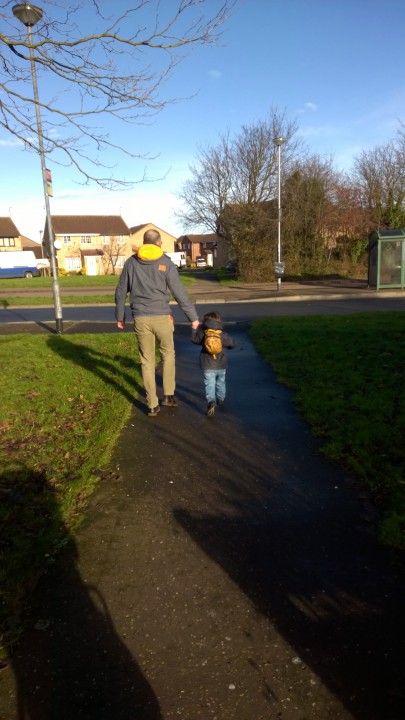 running to playgroup with daddy on his first day

Dropping him off for the 3rd session was the real low point. He cried a little before we left home but then cheered up and practically ran all the way there, very excited. He then cried when they opened the doors even though he had been saying he was excited to go in. He then cried for ages and clung to me, dragged me inside to where they read stories and didn’t want me to leave. I found that so hard but had to be strong and smile and promise I would pick him up. I smiled and left him in the care of the playgroup despite every instinct telling me it was wrong. I came home and struggled. I took to facebook for some reassurance, to hear from other Mummies that this was a low point and that it would get better. (Huge thanks to the lovely ladies who supported me through this.) I know that him going to playgroup is really good for him but I just worried that he wasn’t ready for it.

I was anxious the whole time he was there and concerned that it was getting worse rather than better. To my relief though, when I went to pick him up, one of the staff immediately said he had been better that day. He had been getting involved in activities and had not been upset. Phew! I nearly cried right then as it had felt worse at the drop off and I was concerned he would have been upset throughout again. To know he wasn’t was wonderful! He balled his head off when he came out and I really had to choke back the tears and not show him how upset I was, especially as my tears were more of relief than anything else!

On the way home that day he was telling me what he had done that day and he said “I cry a bit… don’t like cry” which nearly broke my heart and I told him it is ok to cry sometimes but that there was no need to cry at playgroup because playgroup is fun and Mummy will always come back and get him afterwards. He seemed pretty content with that.

On the 4th session he was again a little unhappy leaving home then excitedly running all the way there. He was so excited that unfortunately he tripped and cut his lip open halfway there! Not good timing! I had no tissues or wipes or anything ( as it is literally a 5 minute walk) so had to use my gloves and his scarf to mop up the blood pouring from his poor lip. I carried him the rest of the way and thankfully some other mummies had wipes to clean us up as we were both covered in blood at this point. I was really concerned about how upset he was but as soon as they opened the door he bounded right in. I explained to the staff about it but he seemed fine so I left him to it. The best thing was that that afternoon there was no tears at all when I picked him up, hooray!

And, well that was it. Since then he has not cried when I have dropped him off, or when I picked him up, and the news from the staff is that he is getting more and more confident. He goes outside to play and he loves joining in with the singing at the end. He is just loving it! He keeps saying “Is it playgroup tomorrow?” and “I do singing at playgroup” and he picks up toys and says “we have this at playgroup.” He is so proud of all the things he has made at playgroup and wants to show anyone and everyone all of his creations. 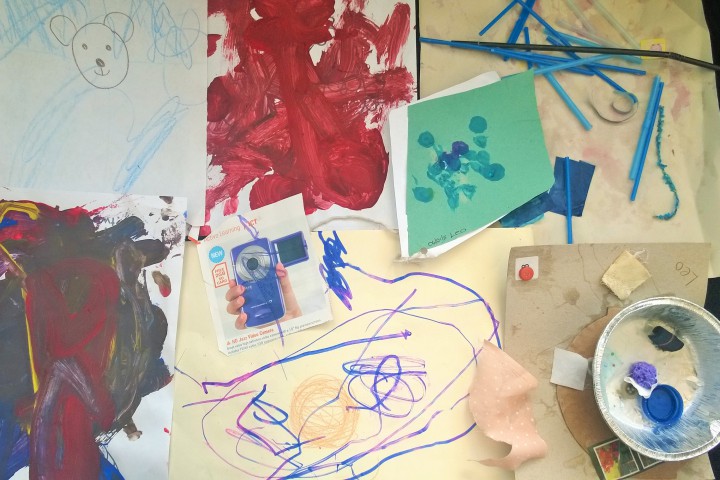 A few of Monkey’s creations at playgroup!

It is such a relief to know he enjoys it so much and he is growing up more and more as the weeks go by so it was definitely the right thing to do!

24 thoughts on “Settling in to playgroup”