I have to admit I struggle a bit with writing these updates now, they take a bit of effort collating it all, remembering everything I want to write and making sure I have good piccies. Which is probably why I have not been very good at getting them done on time lately! So I think from now on they will be a bit less frequent, to take the pressure off. I will still do updates but only every 2-3 months I think!

Anyway on with the 15 month update! Our little lady isn’t a baby anymore. She runs around like a little loony, makes her feelings known and she is so so clever. At least to us. I haven’t got a clue what little ones are ‘supposed’ to be doing at this age and I don’t really care. I just want to marvel at every little development and enjoy every moment of her growing up. 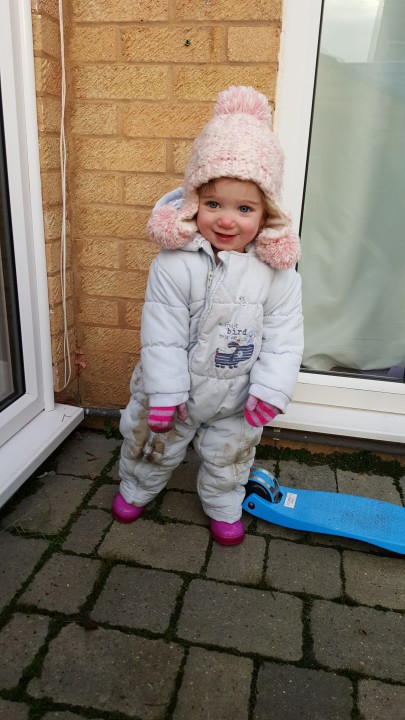 She adore books. She loves turning the pages and she loves being read to. But only the books she wants you to read.. And you have to do it the way she wants. If I lay the book on the floor so I can read it while she is getting dressed then that isn’t good enough. I have to hold it up. I have to let her turn the pages when she wants and read it in whatever order she dictates too haha. If I don’t then ooh there’s screaming. Some times I haven’t the foggiest what she wants and I just know I am not doing it right because of the screaming! She certainly is a feisty girl, which I love.

One of her current favourite books has some ducks in it and she loves pointing at them saying her favourite word “dah” over and over again as it does seem that she does mean duck when she says this. Though she also says it when looking at fish and a lot of other things too! So I can’t be 100% certain. 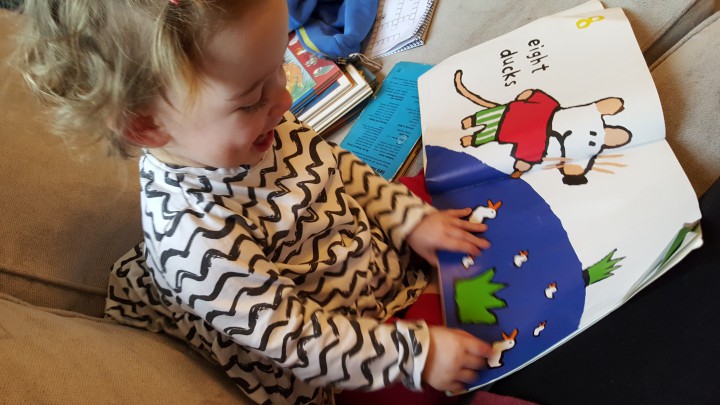 We do have a couple of other almost words too. She is good at shouting an estimation of hiya to people, often accompanied by a little wave which is seriously cute. Especially when she shouts it and waves to complete strangers while she is in her buggy haha.

The most commonly yelled word though is her version of uh oh. No cute uh oh here though, no, LM’s version of more of a shriek. Uh Aowww. Actually drives me crazy, especially when she is shrieking it because she has deliberately dropped all her lunch on the floor. Hmm uh oh indeed!

This happens a lot as she is very much in a phase of dropping things deliberately. Everything. Food from her high chair. A box of crayons. Any container must be emptied in fact. If she has climbed the stepstool in the kitchen then anything on the worktop (usually a selection of toys for her but occasionally something I actually need) ends up on the floor. In the bath she throws all of her bath toys out meaning water goes everywhere. Hence lots of shrieking uh aaowww.

It is also said a lot when she wants us to do something. Our girl has always loved hats and shoes and she will often present us with a random shoe or hat or glove saying uh aaowww until we put it on her! This has extended as she loves coats and jumpers and dresses too and bless her she does have a good go at getting them on herself though she doesn’t remotely succeed. She’s hilarious though and is clearly going to love dressing up. When I was sorting clothes recently I kept having to stop so I could dress her in something she had found in one of my piles. Little cutie! 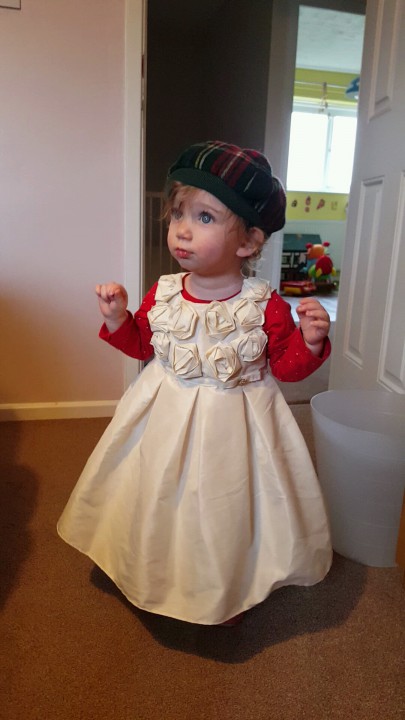 Even at just 15mths LM is showing signs of being far more independent than her big brother. She will potter about and play on her own in a way that Monkey has just never done, even now really. I do play with her of course but often I don’t need to. I’m there keeping an eye in case she needs/wants me but quite often she is content doing her own thing, and actually I do feel like some of her play is quite advanced. 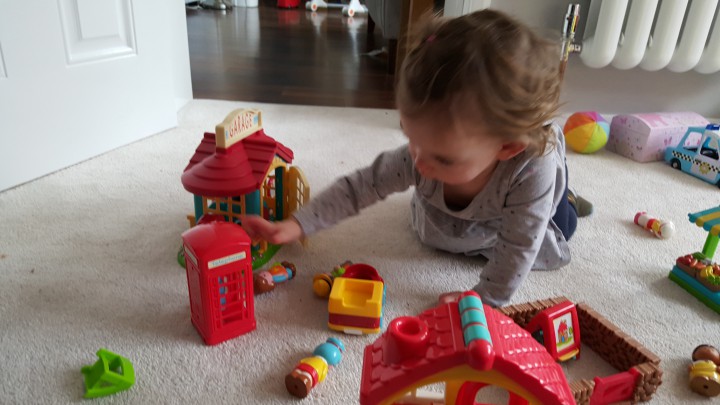 Much of her play involves posting things and putting things in and out of containers. But then there is a level of imaginative play which melts my heart. She adores playing with dolls and any toy really and is so caring towards them. She absolutely melted my heart recently by playing with a dolly, putting her in her buggy, feeding her an ice cream and then giving her a kiss. It was so cute! 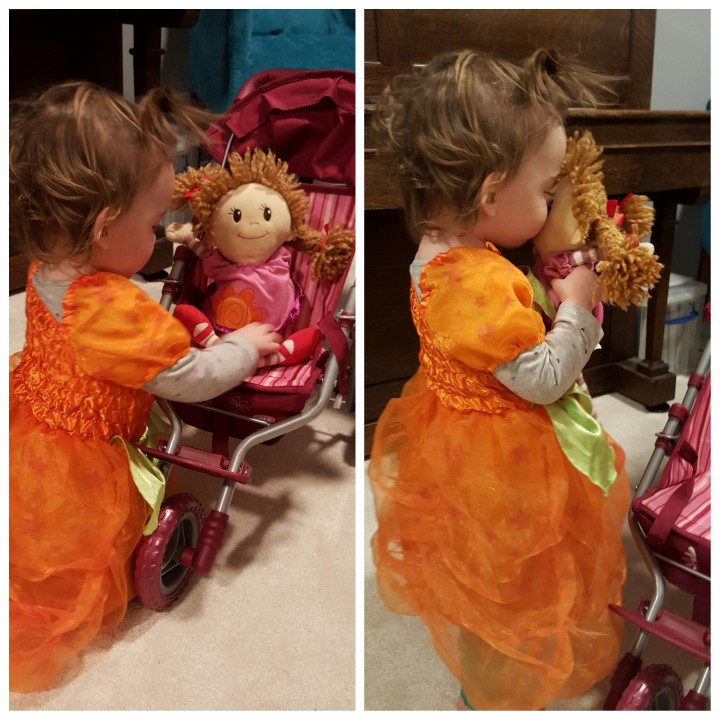 I loved seeing her do it with her brothers Buzz Lightyear doll too, she absolutely adores Buzz! She is lovely with woody too making him stand up and walk. Such signs of imagination already which I just adore. 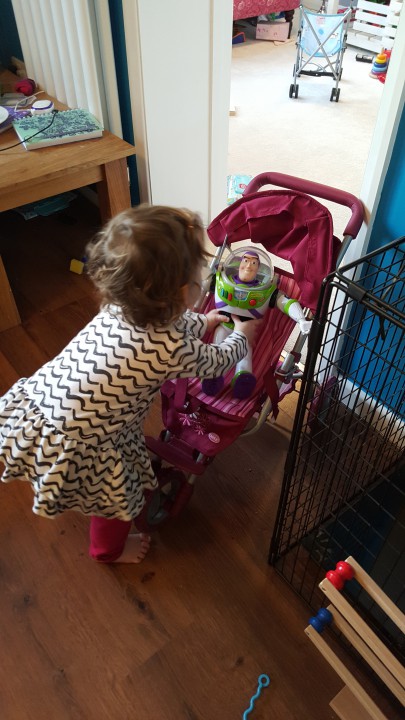 She is a really cuddly little lady too and loves a good snuggle with a teddy, a doll or a blanket. She even wanted to cuddle one of my bags the other day and tried to go to sleep on it… Which obviously was not very comfy! Love seeing her snuggle on the bean bag or a blanket though! 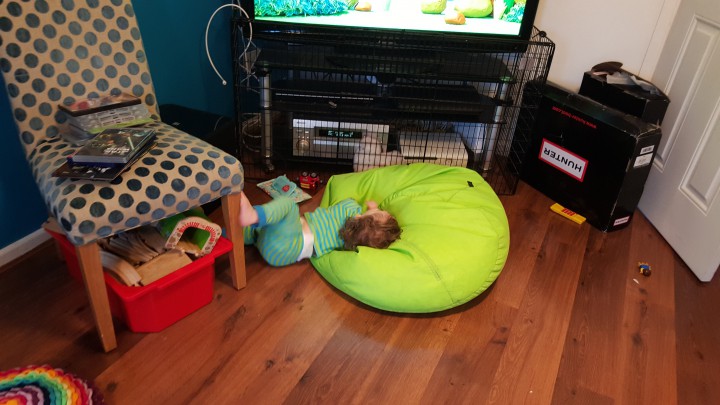 She is also massively cheeky. There are things she knows she isn’t allowed to do, like standing on the sofa or pressing the buttons on the side of the TV… So she does them anyway with a huge grin on her face. Little madam honestly!

Her walking has been coming on a lot lately. She’s been walking well for ages but she can walk further now and is even running quite a bit. The main improvement though is that she will now sometimes walk with us in the right direction. Not always or even most of the time but she certainly does it sometimes. She walked all the way home from Monkey’s playgroup the other day, which isn’t far (about 5 mind at a normal pace) but certainly the furthest she has ever walked!

There are still a lot of times where she is adamant that she wants to go the opposite way and honestly there is about a zero chance of persuading her otherwise when she is set on doing something! Feisty little lady that she is. Which of course means that there is a lot of screaming and the start of some serious tantrums when she doesn’t get her own way. She also falls over a lot too… So I am grateful for the padded snowsuit and that it is cold enough for mittens (when she keeps the things on that is) as they do protect her a little. She has had some nasty grazes on her nose from face planting the floor though poor thing. She will also just randomly decide to have a little lie down on the floor sometimes too… Oddball! 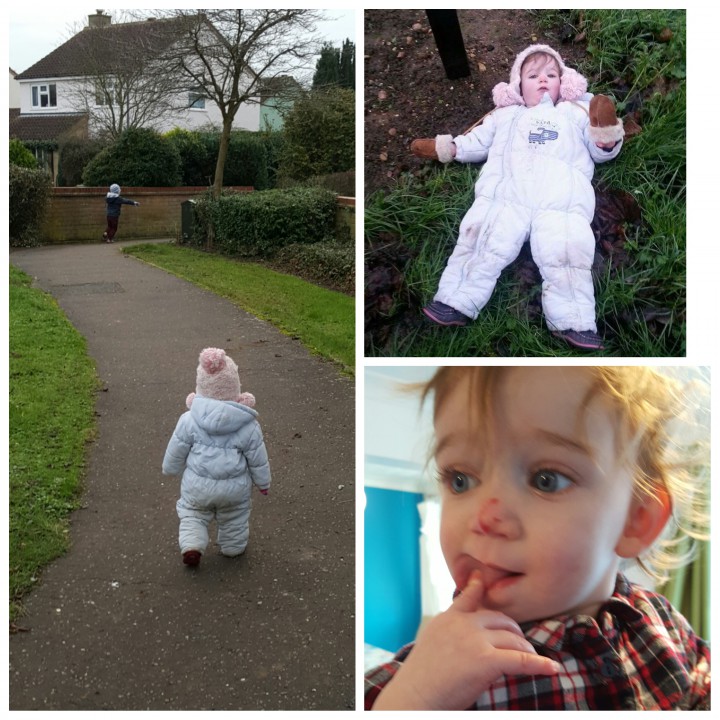 I’m sure there is lots of other things I could say but that’s enough of an update for now about our gorgeous, clever, Feisty Little Miss at 15mths old.