So this week saw a big change in our little household. A change we have been preparing for for a long time, yet still seemed to creep on us. Monkey started school!  It’s just mornings this week, and afternoons next week before going full time the week after that. Doesn’t he look so grown up though? 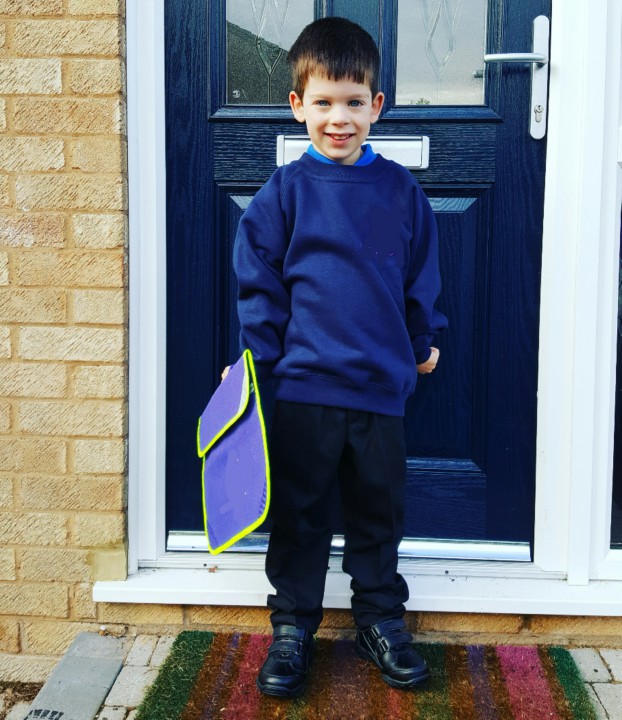 After a few tears on arrival at all of his settling in sessions in July, we fully expected the same to happen in the first couple of weeks. We had done our best to enthuse about school and to focus on all the great things he would do, and though we knew he would love it when he was there, we really thought there would be some initial tears.

So we were hugely surprised when the time came and he gave us each a big kiss and a cuddle, smiled and said “see you later!” before getting stuck straight in to playing with connex. Hugely surprised and obviously hugely proud too. Our boy! He had said on the walk to school “I won’t cry, I cried before because I didn’t have my uniform, but now I do. So I won’t need to cry!” I don’t care what his reasons were but the fact remained there were no tears and by all accounts he loved every minute. 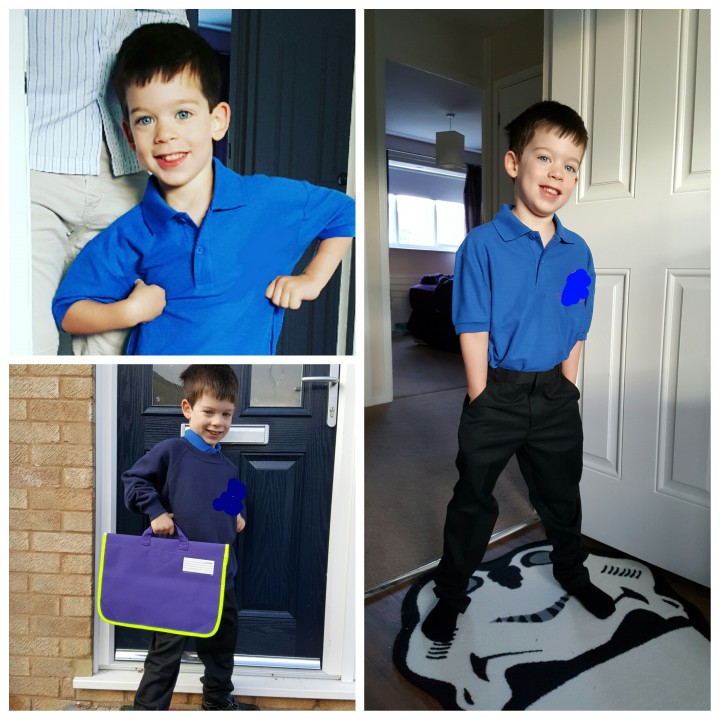 It’s notoriously difficult to get out of kids what they have gotten up to at school, and having experienced this at preschool too, we try to ask a number of questions through the rest of the day to prompt him (what song did you sing? Do you read any stories? Did you do any drawings? Etc.).  Not like an inquisition just as part of conversations through the rest of the day. So it was we discovered he had sung a song and had an apple for his snack (or a couple of bites at least haha). We also knew he had played with the water wall outside as he came out in a different top to the one he went in wearing!

The drop off on day 2 went just as well and that day he was due to stay for lunch. I’m obviously nervous about how much he would eat but his teacher had said they encourage them to eat a good amount of their mains before letting them turn their plate round to eat their pudding. He was very enthusiastic when he came out about his meatballs and pasta and carrots bless him so I think that went pretty well.

On the 3rd day he read a book about a diver, built a pirate ship out of a plank and wheels “and everything else” outside. He ate a banana for his snack (only teeny bites apparently but still better than we can get him to do) and he also got a badge for his “house team” and his team is yellow. He adores his badge and is so proud to wear it everyday haha. 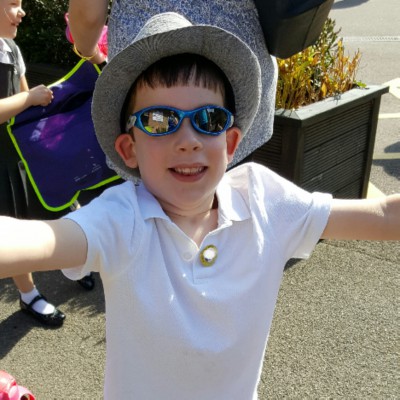 Unfortunately that night at bedtime as he was running in to LM’s bedroom to say goodnight to her, he tripped and fell face first on the floor. There was blood everywhere and he went into school the next day with such a swollen lip that I had to tell his teacher. I managed to get Monkey to tell me later that she had asked him and found out he had told her what had happened. Then he did a drawing of a hospital and a Dr’s note. He then announced at dinner that night that the drawing was in his pocket. On inspection of his trousers (which had been swapped for shorts as soon as we got home as it was a hot day) I found a very screwed up piece of paper that was indeed his drawing. 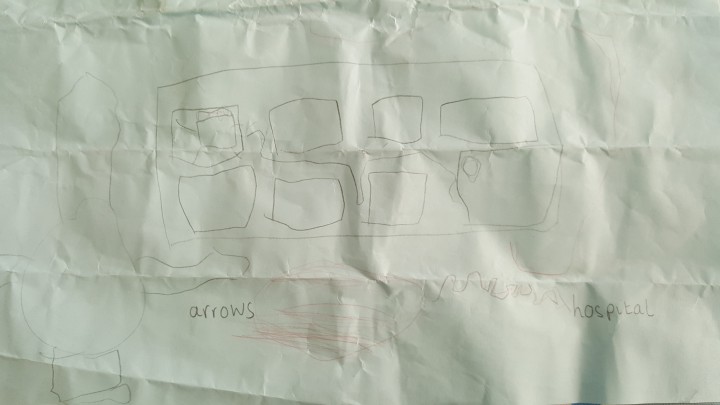 It was a hospital with a person in a window who was “daddy when the Dr bandaged his knee but he’s all better now though he can walk now he can’t run but he can walk.” Love his verbal diarrhoea descriptions of things.

That afternoon playing on our neighbour’s trampoline Monkey’s friend landed on his head and his sunglasses cut his cheek. Thankfully it didn’t look too bad the next day as starting to worry the school will think we are harming him or something!

Friday morning we thankfully got him into school before the rain started and by all accounts he had a lovely time. He apparently played outside in his splashsuit twice and sang a new version of humpty dumpy which he loves and thinks is hilarious.

The afternoon school run was pretty miserable with the rain but I think I will just have to get used to those! Next week is going to be a bit odd as he is just going for a couple of hours every afternoon, but then the week after it will be full time. I’m so so proud of our boy though, he has handled it all so so well. I’m proud of us too as obviously we did just the right amount of preparation for it with him to give our boy, who can be very nervous of change, the confidence to go in happily. We have a schoolboy, seems a bit hard to believe really.

As for how I coped.. well I was more emotional than I thought I would be for the first couple of days, which I wondered whether was because I was so geared up for tears from Monkey that I didn’t know what to do when he was fine! I was so proud but it was also a bit of an anti-climax. I’m not much of a crier, or that good at showing my emotions at times and I was just so so focussed on making sure Monkey was fine. So when he was fine and didn’t actually need my help or reassurance I just felt a bit odd! So I had a few snappy irritable days and feeling like I wanted to cry over absolutely nothing… then eventually talked through how I felt with hubs and a couple of friends and as often happens with me, felt like a huge weight had lifted and I have been alright since really. I need to learn not to bottle things up I really do! Enough about me though as this is Mnkey’s adventure and we are so so proud of how he has taken it all in his stride!

How did your little one settle in to the first week of school?