I have been meaning to write a little compilation of the funny things Monkey says for a while but not got round to it, so I have loads noted down. I will try and limit this post to the best ones. 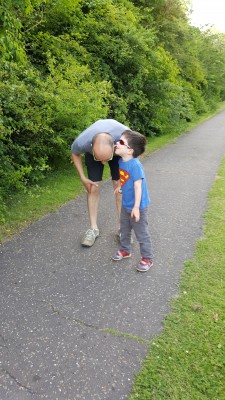 Starting with one of my faves from our funny boy. On a recent walk he said to Daddy “I need to whisper in your ear” Daddy bent down and Monkey said “wa wa wa waaaa”  (think sad trombone sound)  and ran off chuckling. Cheeky monkey!

His voice was getting more high pitched and he sounded more and more incredulous with each questions so by this point we were chuckling away!

Another bathtime conversation I overheard was Monkey asking what plastic was. I didn’t hear exactly but Daddy gave a detailed description and Monkey asked more and more questions, resulting in the wonderful question “What are atoms?” haha Daddy told him but I’m not sure he really understood.  In fact I think he lost him a lot earlier in the conversation with mention of hydrocarbons!

He’s ever so polite and says excuse me all the time…. Even when he is being rude.

“Mummy look at your big fat tummy!” Thanks again haha. He does love us though.

“You’re all my best friends. I’m going to keep you.”

After being told he’s my bestest boy he tells me I am his bestest girl in the world too.

“Mummy, I need to whisper in you’re ear… I love you”

He loves his sister and really cares about her. Shes at an age where she has lots of bumps and scrapes and one day pronounced”Oh no look at your knee! ” to a bemused LM in the bath.

His drawings have come along so much lately and I do adore the descriptions he gives for them! 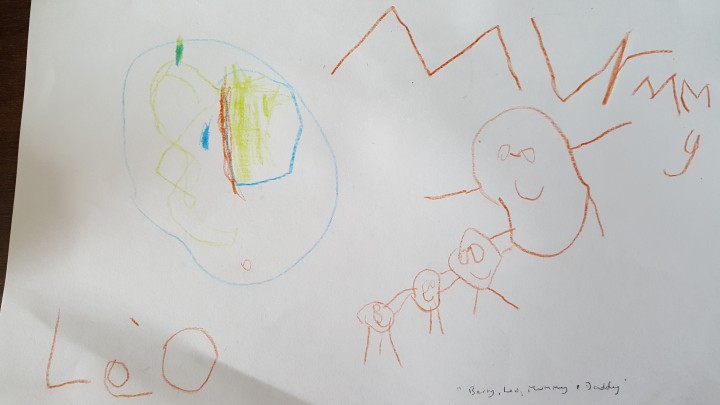 That’s the earth apparently and the little circle at the bottom is the “North pole” where father Christmas lives. The circles are our family and though you may think that the lines coming out the sides are arms, they are actually ears. Connecting ears to be precise and apparently Daddy has very big ears haha.

He also comes out with some really random phrases.

“I would like a salad. A teapot one. I think I need a dinosaur one actually.”

“Excuse me, in olden times that path used to be a road.” (It did not)

“Did the bear make it?” (About the maple syrup Daddy bought back from Canada)

Monkey: “It’s a ruin. It was a castle but the bad guys went in and made it into a ruin. It was a long time ago.”
Daddy: “It was before I was born”
Monkey: “And before Mummy and me and LM”
Daddy: “and Granny and Granddaddy”
Monkey: “Naaaoooo”  (disbelief)

He also had the occasional Pearl of wisdom, like this one about his school transition session.
“I cried at the beginning but I didn’t need to.” Very true little Monkey

He sings constantly and as he is currently reliving his Daddy’s childhood he now knows all the words to the theme from the original transformers cartoon and loves singing and dancing to that. Along with the spiderman theme tune bless him. 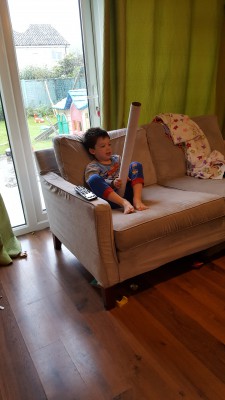 And finally, because toilet jokes and naughty humour are funny at all ages,  when holding up a long cardboard tube between his legs, and chuckling away to himself he announced “Look mummy I have a big willy” and burst into fits of giggles while I pretended not to find it funny too haha.

He says so many funny, lovely, cheeky, annoying things all the time and I wish I could remember all of them. I can’t of course but I love having these little records to look back on.