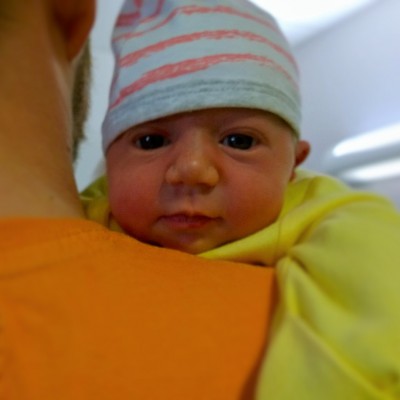 I still can’t quite get my head around the fact that our little girl is here already. I was supposed  to have pre-op today in readiness for my C-Section on Thursday. Instead I am sat at home having just fed our cutie.

Because this little girl did not want to wait to make her grand entrance! My waters broke in the early hours of last Tuesday morning, at 38 weeks pregnant, and as I was not contracting and baby seemed happy, the Drs decided we should keep her safely inside for a little longer. I had steroid injections to help develop her lungs and quite a good rest in the hospital on the Tuesday, with the promise that our little baba would be born on Wednesday morning.

Overnight that night the trickle of waters became a gush (sorry if TMI) and every move I made led to a flood. I also had my first ever contractions. At least I am 98% sure they were contrations. it started as a pain in my lower back with spread round to tighten my tummy. Sounds like contractions to me but the Drs weren’t convinced as the trace monitor didn’t pick them up. I am no Dr and obviously they know what they are doing but the positioning of the sensor didn’t seem to take into account my bicornuate uterus. In that it was placed at the top and centre of my tummy…. right where the dip in my uterus is and not at all where I was feeling the contractions.

Even I could feel that the contractions weren’t regular though and they stopped, so maybe they were only Braxton Hicks… I literally have no idea. How would you if it isn’t something you have ever felt before? Or again since? Anyway they decided to put me on a drip, but as the Dr double pricked my vein (and gave me a lovely big bruise on my hand) she then changed her mind and said it could wait until my surgery. I was allowed no food after midnight and only small sips of water to take my anti-sickness tablets at 6am. 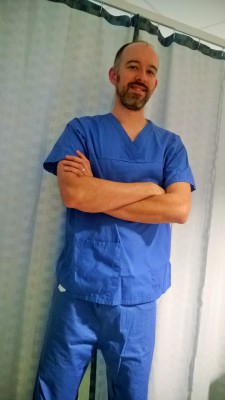 Hubs in his scrubs

I managed to get a few hours sleep and then was transferred back to the delivery suite to prep for my surgery. Hubs arrived at 8 and then at 9.30, fully prepped we walked round to the theatre. We sat there for a few minutes and then were told that there was an emergency section needed so we had to be bumped back. As they don’t normally do elective sections on Wednesdays they only had one surgical team available and I needed to go back to the recovery room and wait.

We were a bit gutted but understood, and thought an extra hour or so to wait wasn’t the end of the world. Though by now I was getting very dehydrated and had a nasty headache, but was allowed a couple of small sips of water and then just tried to doze as much as possible and get through until it was our turn.

The new mum arrived and we were told it would be us within half an hour. We were so excited and relieved…. then there was a flurry of activity, our midwife disappeared and someone else came and said that there was another emergency section so we were bumped again. They said that I would have my surgery at some point that day, but they couldn’t tell me when. We were gutted to be honest. My head was pounding and was so thirsty so hubs got me some water and asked if I could have a paracetamol. I was no longer leaking fluid and baby was hardly moving so I was back on the monitor.

We of course understand that they were emergency situations but having your hopes lifted and dashed again and again was gutting. I was clearly unhappy about the turn of events and was told by two midwives (who I had never seen before and who didn’t know anything about me) that I should be happy because my baby is fine and I should see it as a positive. I’m sorry but telling a heavily pregnant hormonal woman who hasn’t been allowed to eat or drink anything for over 12 hours, who is worried about her baby, when you haven’t read the notes and know nothing about her situation, that she should be positive…. bad idea.

They made me feel like an awful pathetic person. It was like there was an assumption that because my c-section wasn’t an ’emergency’ that it wasn’t necessary or important. I wasn’t stamping my feet or kicking off but I was upset, and I think I was allowed to be!

We were pretty much left on our own for the next few hours, so I carried on drinking water even though I wasn’t supposed to, because I needed it. The paracetamol kicked in and baby started moving more which improved my mood a lot. Then a nice midwife popped her head in and for the first time actually showed a bit of empathy and said that it was a rubbish situation. Honestly that was all we needed, for someone to just agree that it sucked!

Another 2 emergencies came in and they called another surgical team in as there was too many for the original team to handle. This meant that eventually at about 2.30 in the afternoon we were told that we would be next.

My first C-Section with Monkey, being a fully planned elective, was a really, really, calm experience, and I have to say I am glad I had that experience first. This time, though just felt very disorganised. In theatre while the aneasthetists were doing their jobs and getting me ready, there was people in and out “have you done this yet?” “Well no because so and so isn’t here yet” “Has anyone paged them?” “I don’t know” “who’s doing this? has anyone paged someone to do that?” Honestly it was a bit barmy, they were all very nice and I had no doubt they knew what they were doing, but it was all so disorganised!

With Monkey’s C section hubs had to wait outside until I was fully prepped and then he was brought in, I am so glad that this time he was in the theatre with me throughout, as it was a bit dsconcerting seeing everyone flap about like headless chickens trying to sort things out! At least I had his hand to hold!

Eventually all was ready and the registrar arrived along with a senior consultant. My blood pressure dipped on the table (due to the spinal anaesthetic) and I felt quite woozy and sick at one point, but they soon corrected it and we were off. The surgery took a lot longer than Monkey’s had, because obviously this time there was more scar tissue to get through and they had to go a little slower.

There was one slightly concering moment where I heard the registrar say “uh oh” and I don’t know about you but “uh oh” is not a hugely reassuring thing to hear being said by the person operating on you. I guess it could have been worse, at least it wasn’t “oh s**t!” This was followed by a lovely burning smell so obviously they had to cauterise a bleeder or something! 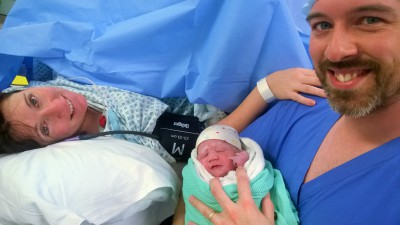 Cuddles with our girl while I am still being operated on!

Eventually our little miss was born and we got to have lovely cuddles while I was being repaired, which again took a lot longer than with my first c-section.  Whereas with Monkey I had disposable stitches internally and then just glue on the outside layer, this time I had to have staples, which I wasn’t exactly thrilled about, but apparently because my waters had been broken for a couple of days, my risk of infection was higher and apparently staples allow any infection to come out.

I was wheeled round to recovery where Daddy and Little Miss were having skin to skin and she was desperately trying to eat Daddy! I was apprehensive about breastfeeding after having such a difficult time feeding Monkey, but honestly it was the easiest thing in the world this time. We had a cuddle and she latched on immediately, like an old pro, and basically camped there for hours. 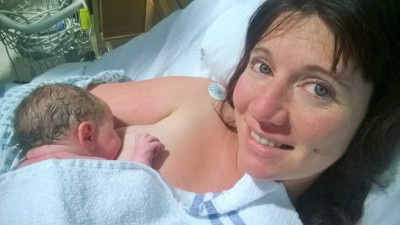 Our girl is safely here!

5 days on all is well, I have had my staples removed today (not as painful as I thought it might be, in fact I barely felt some of them come out) and Little Miss is still feeding brilliantly. In fact she has only lost about 1% of her birth weight, which is nothing and a lot less than Monkey did!

Such a different experience to Monkey’s birth and with all the drama I am just so relieved an grateful that she is here safe and sound. Plus on the positive side, I now know what it feels like for your waters to break, and what contractions feel like. When the VBaC was taken off the table I thought I may never know what that felt like and while I will probably never know how it feels to actually give birth, at least I have had part of the experience.