Monkey loves baking, he would do it every day if he could and I do love doing it with him but I don’t have the energy to do it with as much at the moment. Last weekend as we were having a bit of a quiet weekend I thought it was a good opportunity to try and do some with him. With 2 parents it meant one could bake with him while the other could look after LM.

Hubs loves baking, he was the one who got me interested in baking when we met and he really loves baking with Monkey. He has more patience than I do too so they are a great little team. So it was an easy decision for them to spend some time together and do some baking! one of Monkey’s favourite programmes at the moment is Bing Bunny and there is an episode where they make Ginger Bunny biscuits. He loves it so I wanted to find a recipe where you can roll it out and cut out shapes as most of our biscuit recipes are for just free-formed biscuits really. Neither hubs or I like gingerbread very much though so we though either a plain or chocolatey one would be great.

So I found this lovely, simple, recipe to make lovely simple chocolate biscuits.

Mix the flour, sugar and cocoa in a bowel and rub in the margarine.

Add the milk and vanilla essence and mix in well. Bring together with your hands and knead lightly on a floured service. (Ours still felt really gooey at this point but soon firmed up with some kneading in the flour).

Roll out to a thickness of 0.5cm and cut shapes. The recipe we used 7.5cm rounds and baked the biscuits for 8 – 10 minutes. We gave Monkey the choice out of all of our cutters and ended up with Star and Rhombus biscuits and only baked ours for 7 minutes which was perfect.

Monkey is so good at baking now – a far cry from the early days where all he wanted was to eat the raw ingredients, even the flour, now he is so good at measuring everything out and so careful with it all, and only ate some of the dough when we said it was ok to. 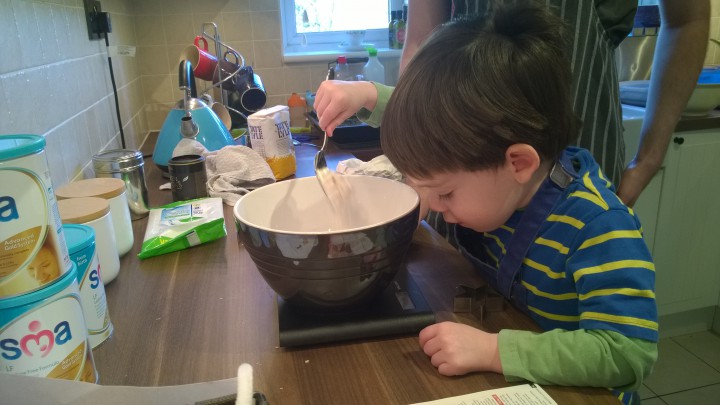 He was less keen on getting his hands really mucky when mixing the dough, but loved kneading it and helping daddy roll it out (he hasn’t got the hang of rolling it out himself yet). 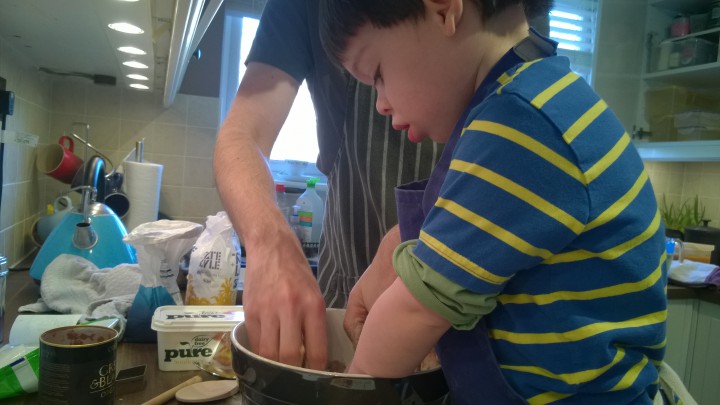 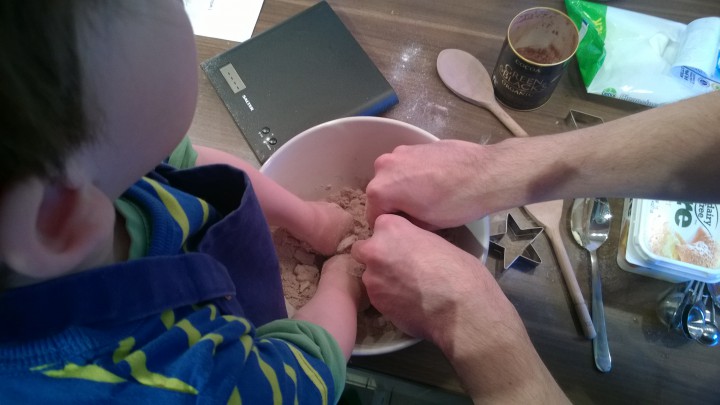 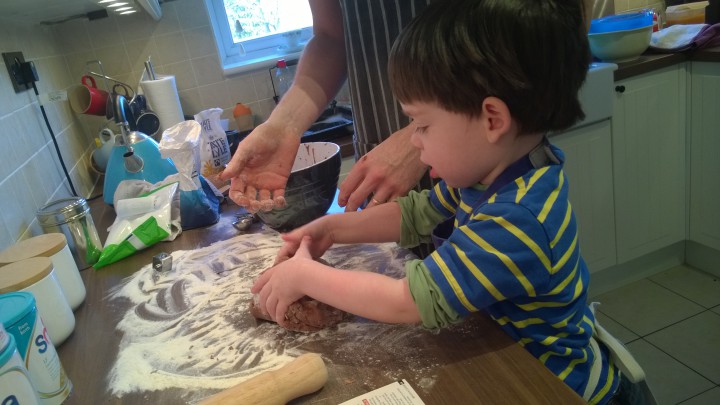 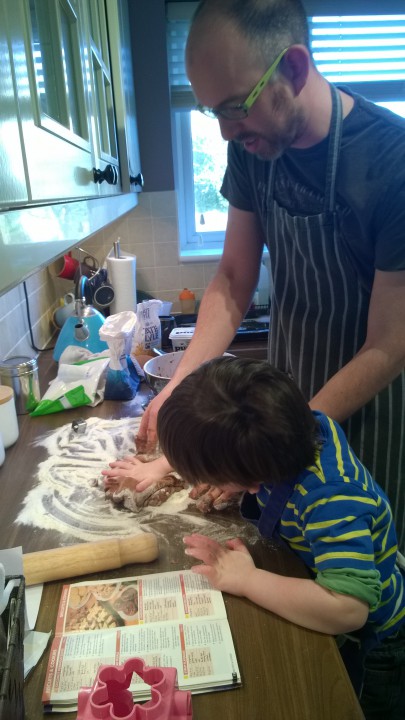 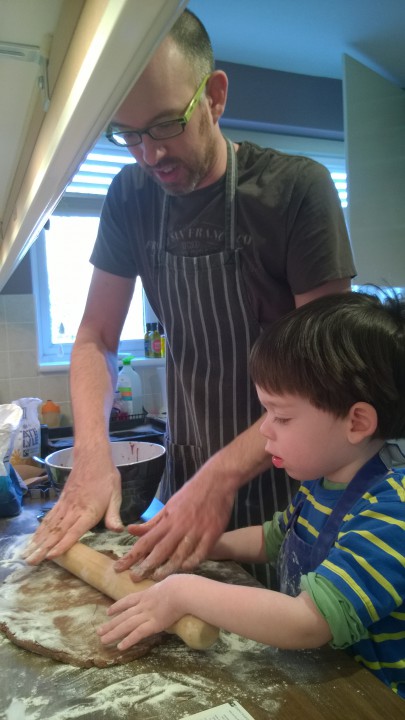 Then of course was the important job of cutting out the shapes ready to bake! 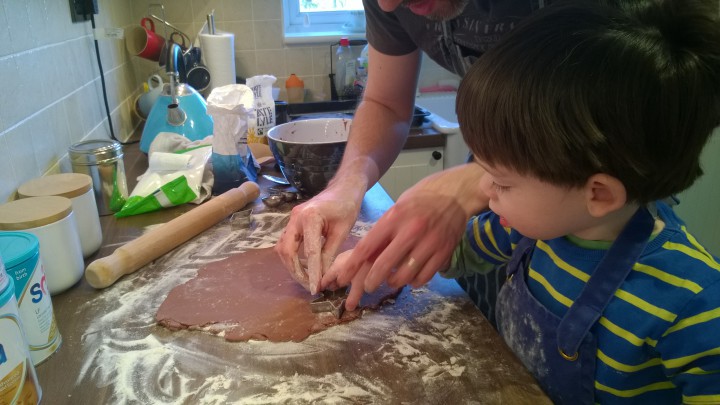 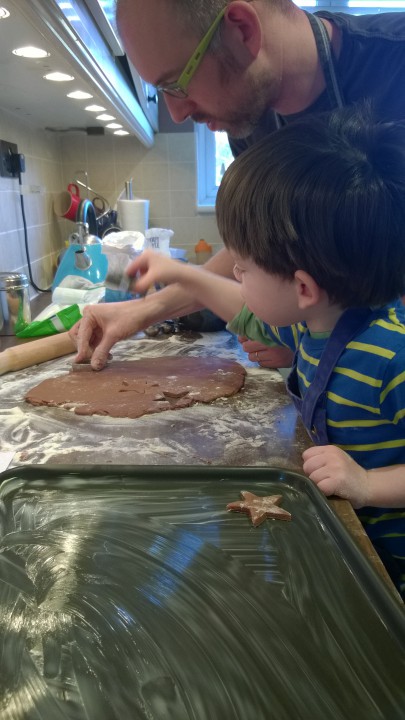 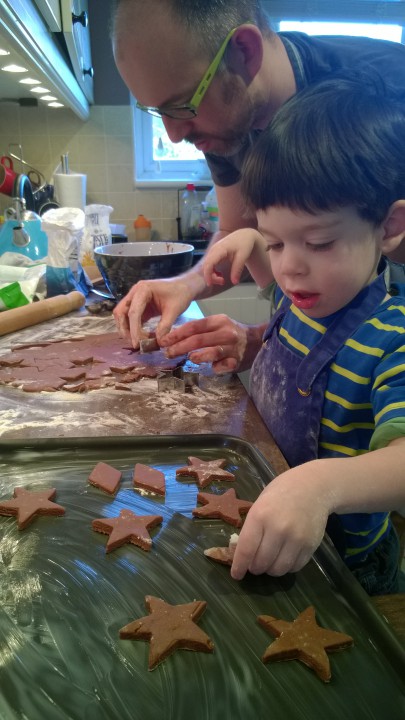 You can decorate these biscuits however you like, the recipe used a Chocolate Glace Icing but we used some little icing tubes we already had in the cupboard and again I was pleased to see how precise he was. Even since the baking we did at Christmas he has got a lot more precise and was great at putting dots and patterns on the biscuits. 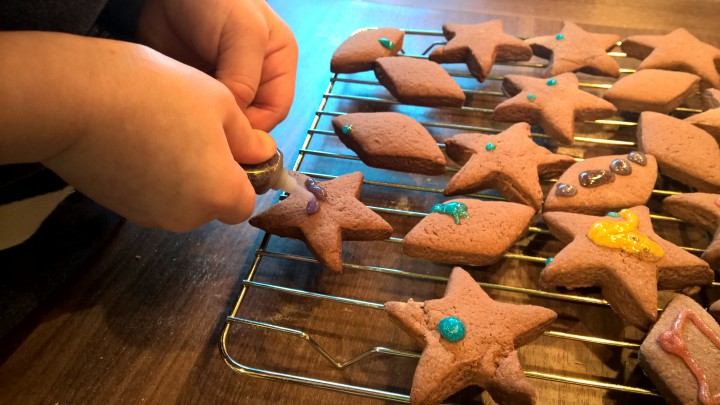 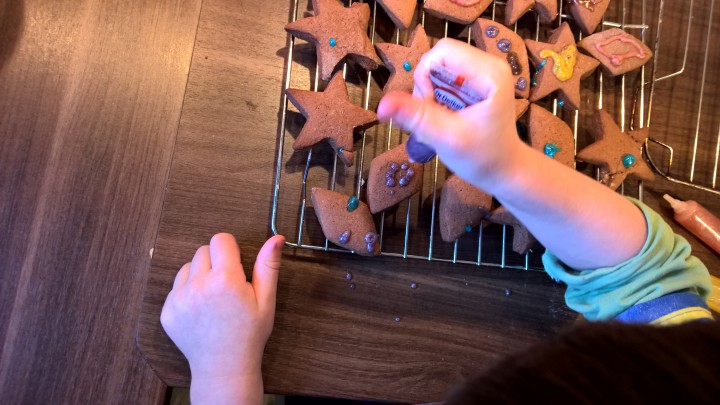 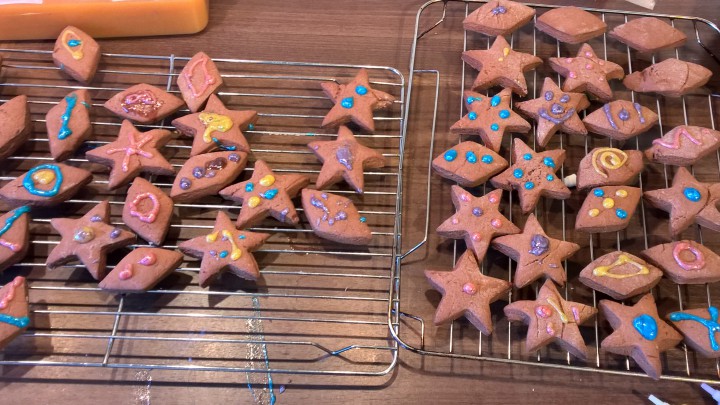 The finished biscuits! Obviously Daddy helped with some of the patterns but Monkey did a lot of them by himself.

These chocolate biscuits are super quick and simple to make although obviously baking them with a toddler takes a little longer but just adds to the fun. Monkey adored making these with daddy and actually they were really, really tasty!