Yep I am feeling cheerful this week :). It’s amazing how much better you feel when you are getting enough sleep isn’t it? LM has now slept through from 7pm till 430/5am for the past 6 nights, meaning hubs and I are both getting a good long sleep at night. After a troublesome week last week  we are so very, very pleased about this!

We are expecially grateful as we had a busy weekend. On Friday night my brother and his girlfriend came round for a takeaway which was really lovely and, well, the four of us can natter away til the cows come home so it was an uncharacteristically late night for us, meaning instead of our usual 9/930pm bedtime we went to bed after 11! Shocking I know! We were a little tired Saturday morning but had another busy day ahead of us as it was one of my best friend’s hen do. I had my hair cut in the afternoon and then in the evening I left hubs alone with both kiddies for bath and bedtime – the first time one of us has done this alone with both kiddies since LM became part of this routine!

Hard work for him but I had a lovely lovely time with my friends, having a good natter and a bit of hen do silliness :). I love my kiddies but I so need some time for me sometimes and this gave me the push I needed to get out of the house and enjoy just being me, rather than being Mummy.

Sunday was a yummy lunch at my Mum’s with my side of the family and we had a very lovely time, Monkey so loves playing with all of his aunts and uncles and LM was good as gold too.

I love that pic of my Mum and Stepdad with Monkey and LM, just gorgeous :).

Monday I have to admit I was shattered from a 430am start to the day and the busy weekend, but as the week has gone on I have been feeling positively restored. Getting a series of solid nights sleep, even with the early start to the day, really is making a huge difference to my energy levels. LM has been a lot better too, she is still dribbling a lot but she doesn’t seem to be in as much pain with the teething and has been sleeping really, really well. This means I have had more time for me but also more time for Monkey.

We have had some lovely playtimes out in the cold this week while  LM has bee happily dozing. I have also been trying to be less negative towards him, to give more positive praise. I am a huge believer in positive reinforcement but it is so easy when you are tired and stressed to focus more on the negative behaviours. So instead we have been concentrating on the good and while we have had to threaten the naughty spot a few times, in general his behaviour has been much better this week and he is learning to say “please can I have” instead of “I want” which is actually going surprisingly well bless him! We are still having issues at dinnertime with him refusing to swallow food but there are a lot less tantrums and he is much more cheerful and so I am much more cheerful….or is that I am feeling more cheerful so he is feeling more cheerful hmm maybe a bit of both :). 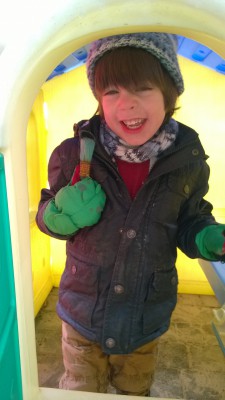